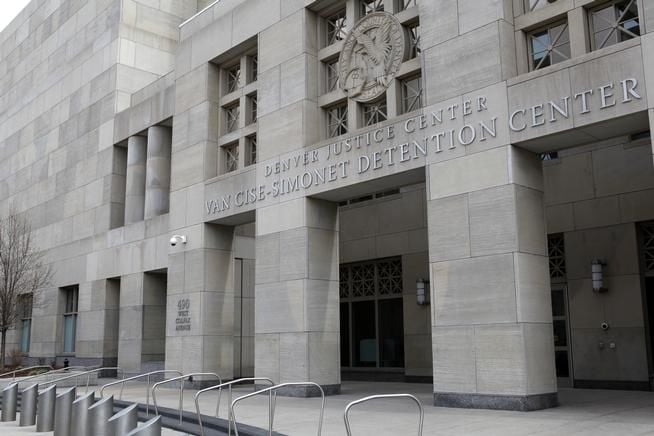 The largest coronavirus outbreak in the state is now in Denver’s Van Cise-Simonet Detention Center, where the number of cases tripled in the past week, hitting 581, or about 40% of the jail’s capacity. (Photo by Katie Wood/The Denver Post via AP)

COVID-19 cases in Colorado’s corrections system have shot up in recent weeks, putting the rate of infections inside prisons, jails and halfway houses far above the rate for all other Coloradans while a previously unreleased state report predicts the virus will cause hundreds of deaths in Colorado prisons.

The largest coronavirus outbreak in the state is now in Denver’s Van Cise-Simonet Detention Center, where the number of cases tripled in the past week, hitting 581, or about 40% of the jail’s capacity, according to health department data released last week. The second largest outbreak is in a state prison, Sterling Correctional Facility in northeast Colorado, where the state has reported 440 COVID-19 cases, or about 18% of the inmates, and two deaths. Another outbreak hit Crowley Correctional Facility in southeast Colorado on May 2, where 41 prisoners have now tested positive.

While only two prisoners at the Sterling prison have died with COVID-19 symptoms, a Colorado Department of Corrections analysis in late April, which has not been shared publicly before, predicted a much higher death toll will hit the state’s prisons. The analysis also predicted that virtually all of the state's prisoners and corrections staffers would be infected with COVID-19 without significant policy changes.

Denver DA’s office: 'We have done all we can’ to reduce jail population, as COVID-19 cases spike in downtown detention center

The surge in cases at correctional facilities is happening at the same time that nursing homes, which make up the largest percentage of outbreaks identified by the state, have seen the growth in cases slow.

Without a dramatic reduction in Colorado’s prison population, COVID-19 likely will spread throughout the state’s prisons, the analysis concluded, killing between 150 to 170 inmates and 73 to 83 correctional officers. The analysis considered only the inmates in state-run prisons, but predicts around 90% of the entire state prison population and it’s staff will eventually become infected without policy changes.

At the time of the April 21 analysis, just eight state Department of Corrections prisoners and six correctional staffers had contracted the virus, according to the report. The growth in the number of cases has hewed closely to the projections in the analysis, with the actual number of infections adhering to the report’s low-to-moderate spread modeling. Around the same time, about two-dozen COVID-19 cases had been tracked in other correctional facilities in the state, with those cases now growing into the hundreds.

“It’s going to be back to business as usual,” predicted Christie Donner, executive director for the Colorado Criminal Justice Reform Coalition, a nonprofit that advocates for reducing prison populations, hours before the governor acted.

While allowing the DOC to continue using Centennial Correctional Facility South in Cañon City as an initial intake location for male prisoners, the governor let expire portions of the executive orders intended to give corrections officials more flexibility in reducing prison populations through early releases.

Donner said she would like to see a more nuanced approach that would allow more early releases of older prisoners with medical conditions that make them more vulnerable to death from COVID-19. Those prisoners, she pointed out, are less likely to commit new crimes because older inmates are statistically less likely to recidivate.

Corrections officials had used such “special needs” conditions to grant early parole to offenders, but had restricted those releases to prisoners whose underlying crimes had not had victims. Other prisoners nearing their parole eligibility date also had gotten consideration for early release if they were deemed to not be a safety risk, under the portions of the executive order Polis did not renew.

The ACLU of Colorado, in a letter to Polis earlier this month, urged the governor to use his clemency powers and executive authority to “meaningfully flatten the curve and save lives inside prisons.”

“Without substantial prison depopulation, we can be virtually certain that the number and percent of infected incarcerated people and staff will grow exponentially, as will serious illness and death in Colorado’s prisons,” the ACLU letter states.

The ACLU highlighted the case of Anthony Martinez, 84, a prisoner the organization's letter said has renal failure and dementia along with other medical conditions. He has been incarcerated for more than 30 years for a series of robberies, according to the ACLU.

“He and his family are understandably terrified that he will catch and die from the virus,” the letter states. The letter adds that during his prison sentence, Martinez “has paid a substantial debt to society for these crimes. With his age and infirmity, no one can argue he is a public safety risk, but he has a substantial risk of becoming seriously ill or dying from COVID-19 if he remains incarcerated.”

Although DOC officials have used the governor’s previous executive orders to enact policies to release inmates early, they still have not met the “target occupancy for the pandemic” outlined in the DOC analysis. Prison officials say in the document that the state’s incarcerated population should be reduced by as many as 2,500 inmates from its past peak.

The document, obtained by The Gazette through the Colorado Open Records Act, highlights the challenges the Corrections Department faces to prevent the spread of the virus. It also raises broader concerns that incarcerated individuals throughout the state are particularly vulnerable to the virus, including those in facilities not run by the state, such as halfway houses and county jails.

The state’s prisoners still are being double-bunked in cells and facilities that aren’t designed to contain the spread of a highly contagious disease. And universal testing for the virus has only been conducted in one prison, Sterling, despite statistics showing an aging prison population. There are 2,000 offenders in the state’s prisons over the age of 55, putting them in an age group particularly vulnerable to worse outcomes from COVID-19, according to the DOC analysis.

DOC officials also warn in the document that prison staff could end up spreading the virus outside prison walls into local communities if safeguards aren’t taken — a sentiment echoed by the state health department in response to a request to allow partial restaurant reopening in the surrounding community.

Officials in Logan County, where Sterling Correctional Facility is located, submitted a request to the state health department on May 6, asking for a variance to the statewide restrictions on restaurants. They pointed out that the vast majority of Logan County COVID-19 cases were in the Sterling facility, but state officials denied the request, saying they feared the prison outbreak could spill out into the surrounding population.

“While few cases have occurred outside of the facilities, the plan submitted raises concerns about whether cases will continue to increase in the community due to employee exposure,” CDPHE director Jill Ryan wrote in the May 12 response letter.

“We knew that an outbreak in a prison would not only risk the lives of inmates and staff, but prisons could become hotbeds of spread to the local community as essential staff moved in and out of prisons back to their homes,” the DOC analysis states. “The current outbreak at Sterling Prison is unfortunately going to be our first proving ground on what might be a longer journey.”

The report concluded that allowing greater social distancing by creating additional prison capacity or through reductions in prison populations, would be the last resort to combat the virus’ spread: “The last lever to mitigate the pandemic, and the only one not in play at this point is the effort to reduce prison density.”

While the analysis prescribes reducing the number of prisoners, releasing the wrong prisoners can come with life and death consequences, beyond the risks of coronavirus.

Earlier this month, Denver police arrested a parolee, Cornelius Haney, 40, who had been released from prison early due to coronavirus concerns. He is accused in the fatal shooting of a 21-year-old woman in the East Colfax neighborhood.

Local authorities also have pushed back against early releases. In April, Senior Larimer County Attorney David Ayraud warned in a letter to Dean Williams, the executive director of the state’s Corrections Department, that he believed unilateral placements of offenders into local communities is contrary to state law. He said at that time that he would not accept one specialized category of early prisoner releases without local approval.

The state’s prisons typically run at 99% occupancy, but by the time the analysis was conducted, DOC officials had begun releasing prisoners early to help free up space and allow social distancing measures to take place. By the third week of April, the occupancy rate had declined to 93%.

The analysis found that even with a more aggressive reduction in the prison population, down to 75% to 80% occupancy, the state’s prisons will still see the virus spread and inmates and staff die.

“Even at this level we cannot get single cell occupancy, but at least we can have margins to reduce double bunking in cells and reduce overall spread and mortality,” the analysis states.

DOC officials state in the analysis that they believe “our target occupancy for the pandemic should be 80% to 85%” which would require the prison population to decline by 1,800 to 2,500 inmates.

On Friday, the occupancy rate was running at nearly 89%, according to a Department of Corrections spokesperson.

Colorado board that writes rules for management of sex offenders rife with conflicts, state audit finds

As he lay in his bunk incapacitated by a COVID-19 infection that ultimately caused his death, 86-year-old David Grosse had only his fellow off…