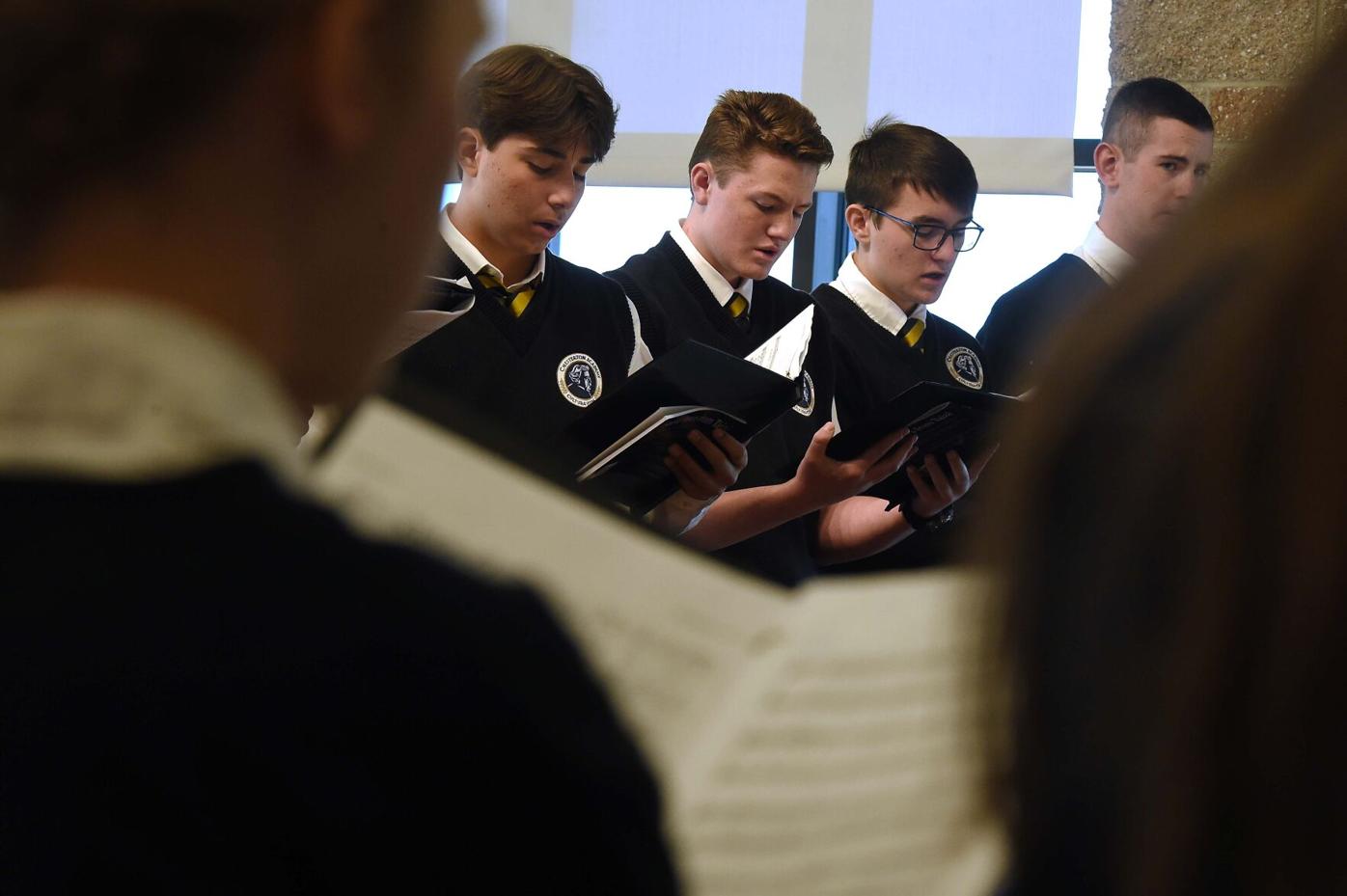 Students with Chesterton Academy of Our Lady of Walsingham sing religious songs during choir practice Oct. 11. 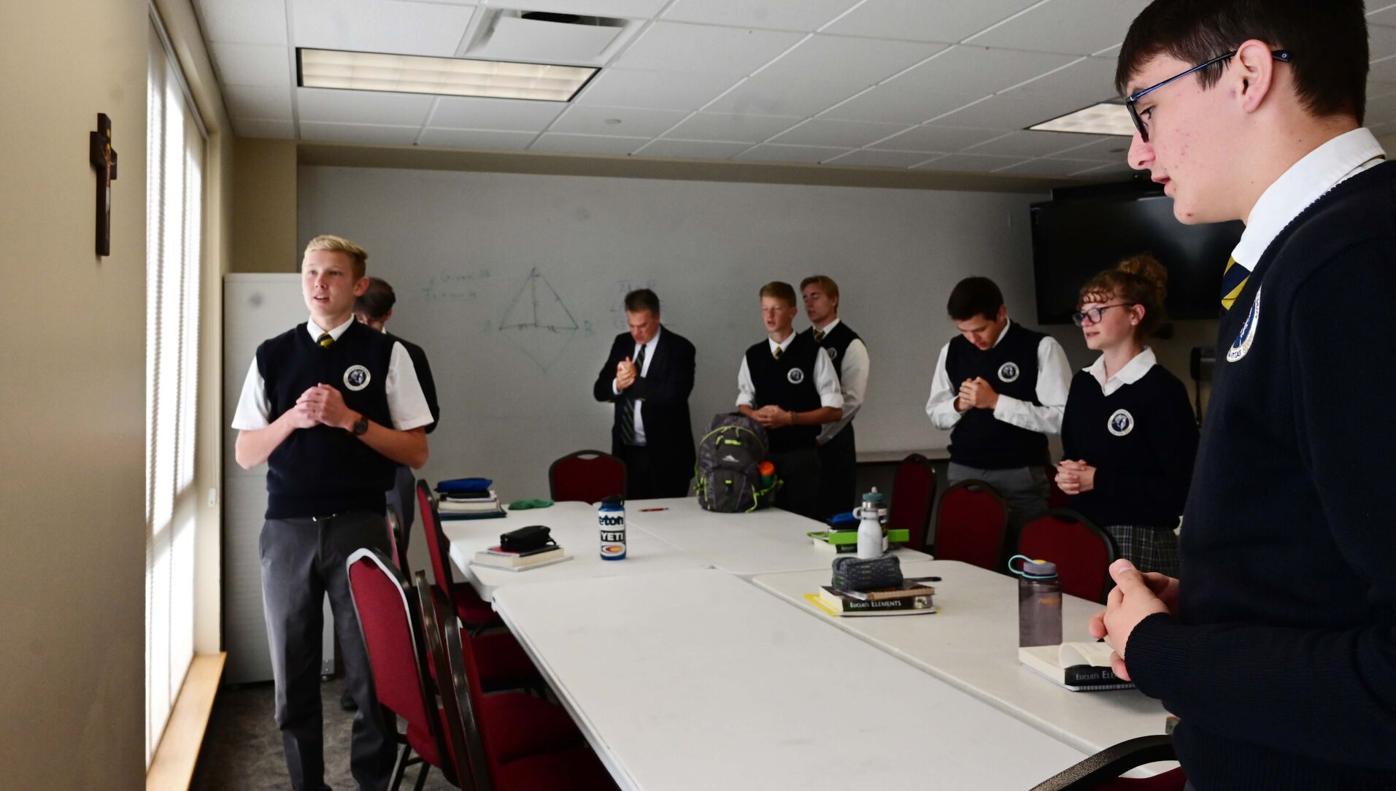 After a Euclidean Geometry class, 11th-graders at Chesterton Academy of Our Lady of Walsingham turn toward a crucifix on the wall and say a prayer Oct. 11. 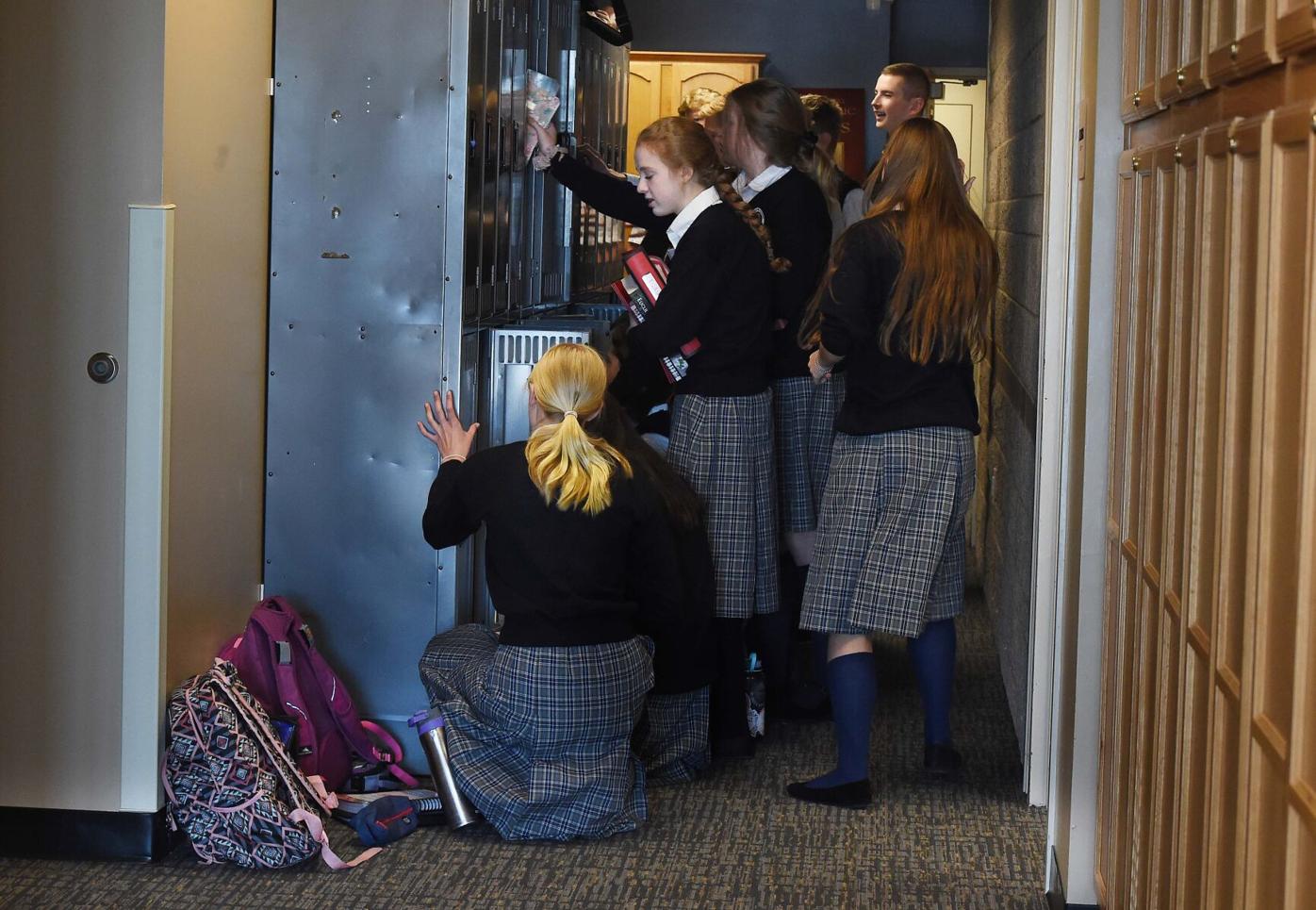 Very conservative uniforms are worn by students Chesterton Academy of Our Lady of Walsingham. Female students go to their lockers between classes on Oct. 11. 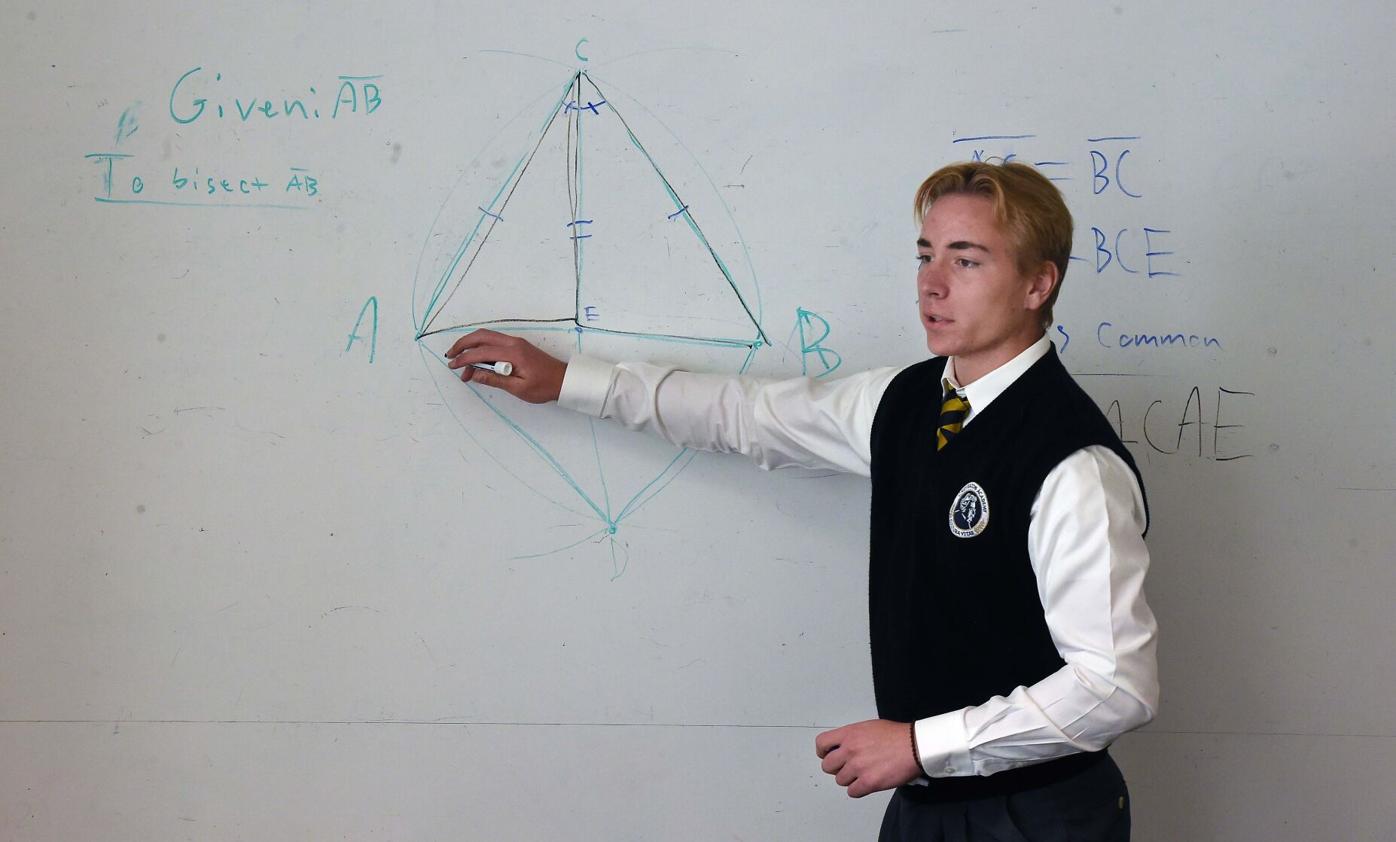 Eleventh grader Gabriel Higgins completes a Euclidean geometry equation at Chesterton Academy of Our Lady of Walsingham on Oct. 11. 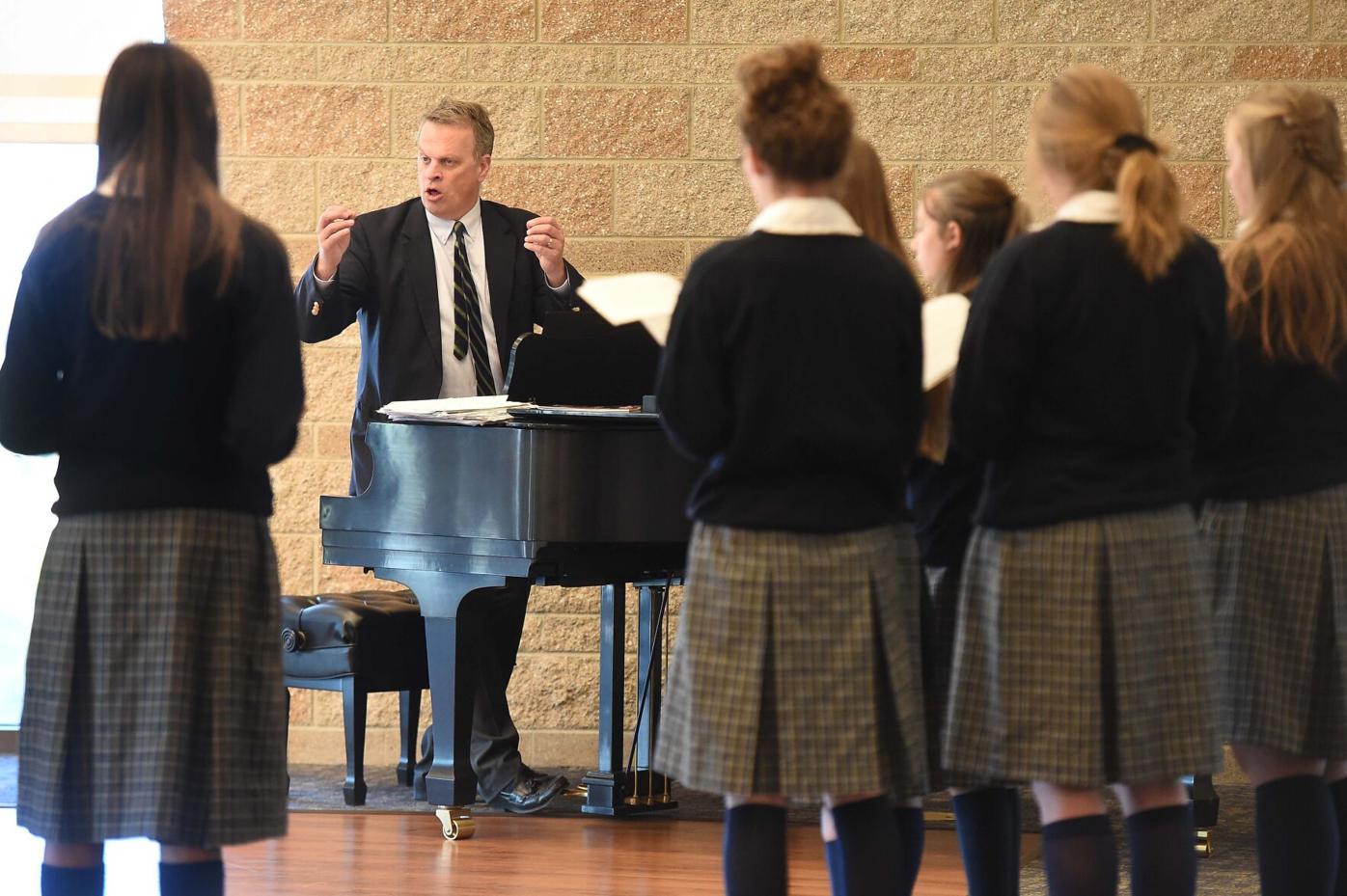 Students with Chesterton Academy of Our Lady of Walsingham sing songs during choir practice Oct. 11. They were being led by school headmaster Mark Langley. 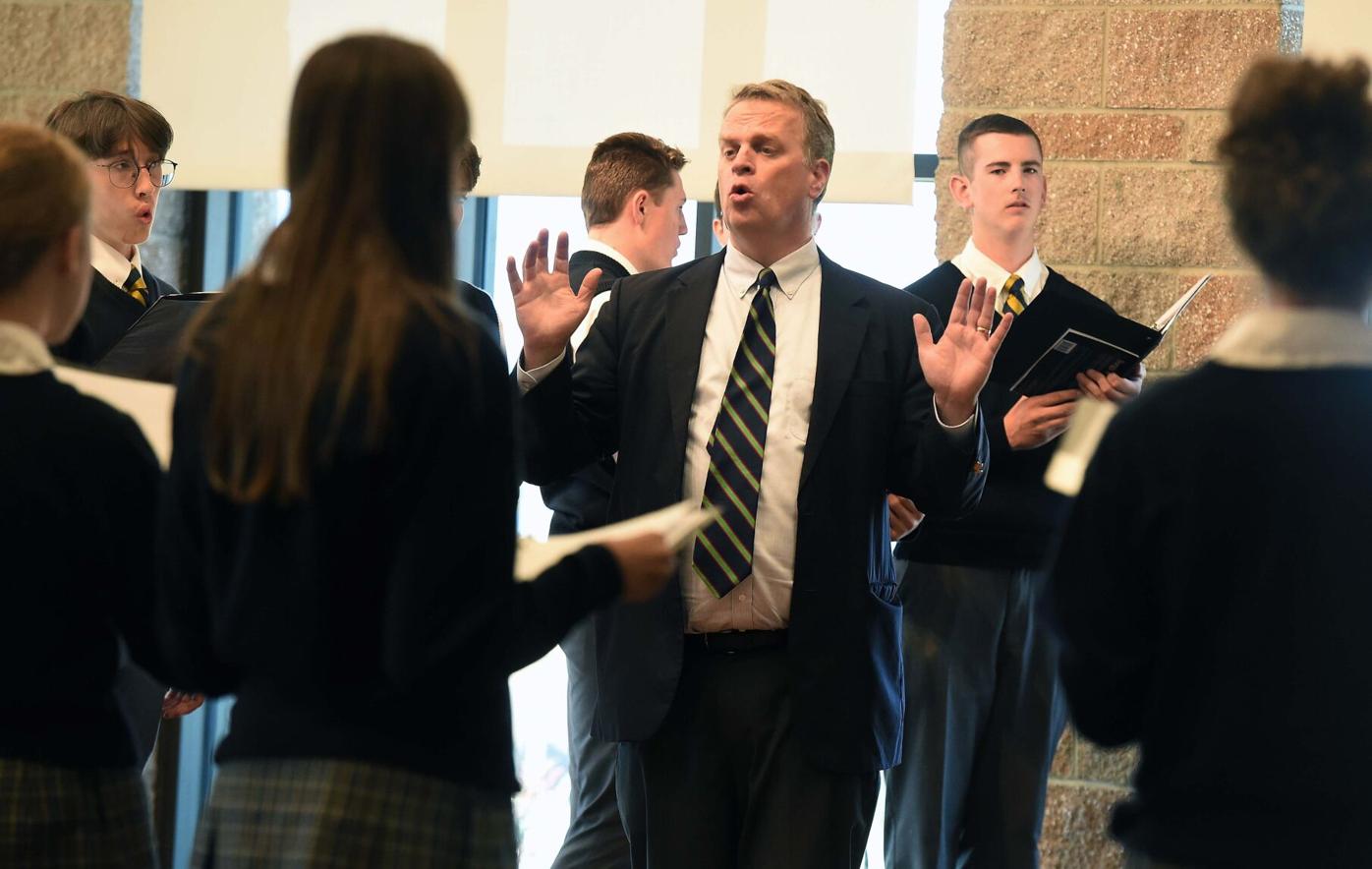 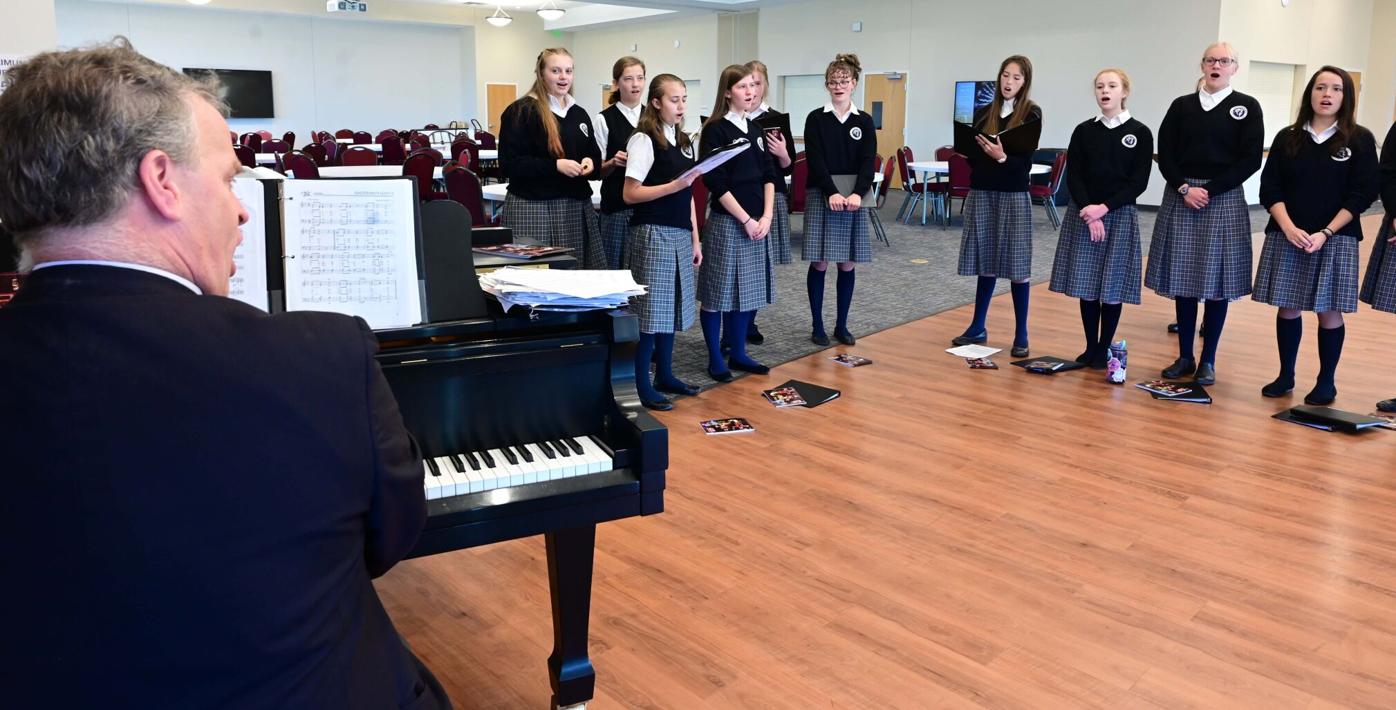 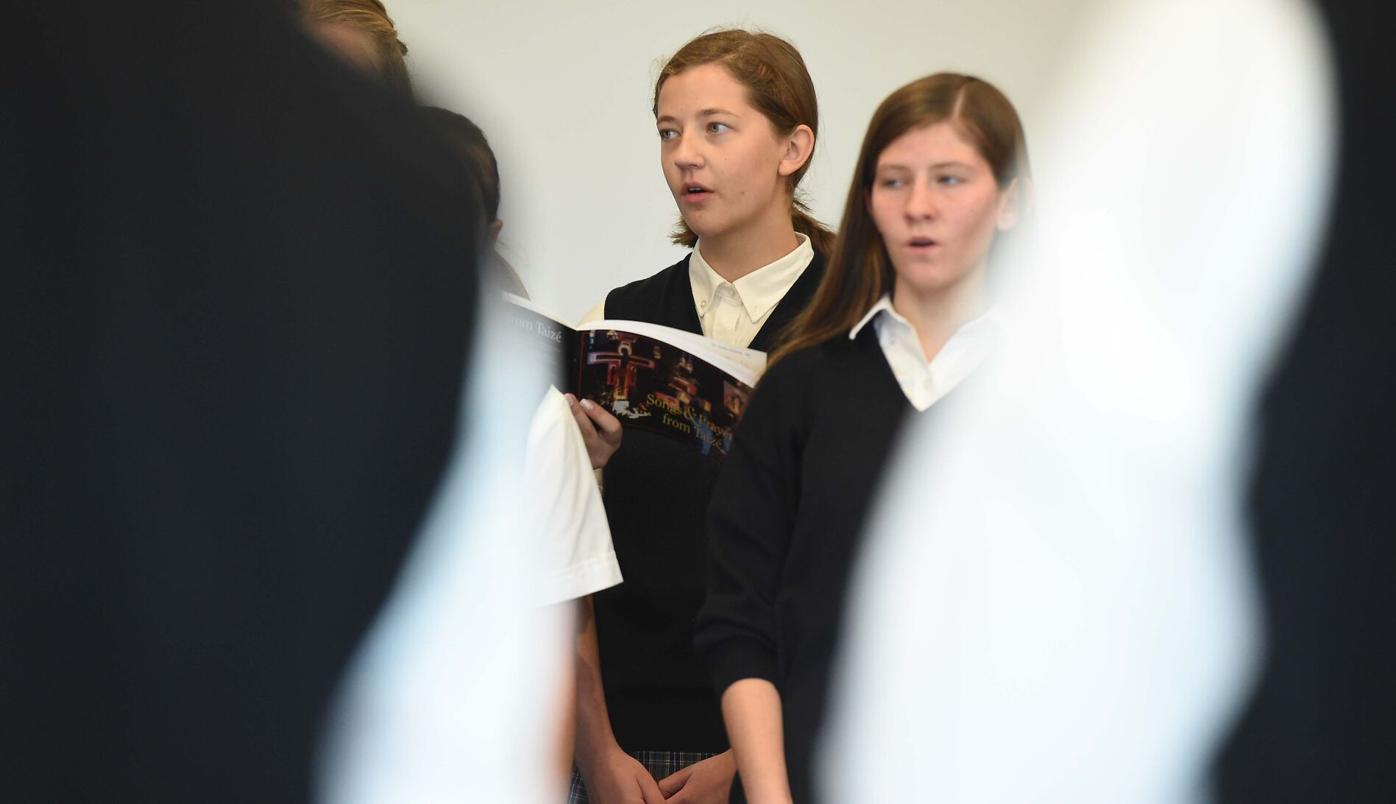 Fifteen-year-old Christina Klein (center) sings with the choir of Chesterton Academy of Our Lady of Walsingham. The choir was singing religious songs during choir practice on Oct. 11. They were being lead by school headmaster Mark Langley.

After a Euclidean Geometry class, 11th-graders at Chesterton Academy of Our Lady of Walsingham turn toward a crucifix on the wall and say a prayer Oct. 11.

Very conservative uniforms are worn by students Chesterton Academy of Our Lady of Walsingham. Female students go to their lockers between classes on Oct. 11.

Students with Chesterton Academy of Our Lady of Walsingham sing songs during choir practice Oct. 11. They were being led by school headmaster Mark Langley.

Fifteen-year-old Christina Klein (center) sings with the choir of Chesterton Academy of Our Lady of Walsingham. The choir was singing religious songs during choir practice on Oct. 11. They were being lead by school headmaster Mark Langley.

The fear, grief and tumult of COVID-19 brought an unforeseen blessing for Christian education.

A difference in pandemic practices created what Roland DeRenzo, superintendent of Colorado Springs Christian Schools, calls “a wave of enthusiasm for recruitment season.”

Parents noticed that the pandemic’s typical seesawing between live classroom instruction and remote learning didn’t seem to be happening at faith-based schools.

And families liked that, DeRenzo said.

“Parents were so hungry and excited and had an intensity in getting students back in seats,” he said.

Campuses in Colorado Springs and Woodland Park posted enrollment growth of 7% this semester, DeRenzo said, with a total topping 1,100 students. That’s nearing the record highs the 50-year-old school saw in the 1980s, he said.

That Christian schools have not wavered from teaching every subject through a biblical and faith-driven lens — amid public debates over gender identity and critical race theory instruction — also has bolstered interest, religious school leaders believe.

“People will call and ask about history and civics, and we say we have not changed our core knowledge curriculum, which incorporates world and U.S. history and infuses Catholicism throughout,” said Superintendent Sheila Whalen, who oversees the seven schools in the Catholic Diocese of Colorado Springs.

Some families lost jobs during the pandemic and withdrew their children, Whalen said, but enrollment this semester reflects a net gain of 38 students, for a total of 1,308 preschool through eighth grade students.

Two schools in the diocese are introducing Catholic classical curriculum this year, Whalen said, which asks students to dissect and analyze original text, such as the Declaration of Independence.

“It’s going back to providing a richer experience for the students,” she said.

Colorado Springs Christian Schools “do not shy away from the history of the United States,” DeRenzo said. “We present the whole history, the flaws, the successes, because when we teach, we teach with two cardinal truths — forgiveness and redemption.

“If you don’t have those, you end up with dominance or elimination, and that’s what we’re seeing in our culture today.”

Principal Jennifer Sutherland attributes a 30% boost in enrollment this semester at The University School in Colorado Springs to “the climate of the public schools.”

She cites parental dissatisfaction over not only gender identity teaching in traditional schools, but also overcrowded classes and standardized testing-based education as reasons for the “huge jump” in students at her school. Families also like that the school is not requiring masks, Sutherland added.

The non-denominational Christian school has been operating on the city’s westside for 16 years and this semester has 60 new preschool through 12th grade students.

And interest hasn’t slowed, Sutherland said, with inquiries about the school up by 80%.

“Just this week we’ve had four inquiries from families wanting to start right now, and seven families interested in the second semester,” she said.

The school is one of the pioneers of hybrid education under the University Model, in which students attend class three days a week and do homeschool lessons two days a week.

“We’re very upfront in saying that in Catholic education, we’re founded on Christian anthropologies, and within that, we believe God created each person male and female, and you’re either born a male or a female, and that’s how you identify,” Whalen said.

“When people come here, they understand that’s the perspective by which we will teach, and we will work with their children,” DeRenzo said. "Our philosophical foundation starts with the family first, not the institution."

Parental involvement has been a traditional cornerstone of Christian education, as parents are considered the primary educators of their children, school leaders say.

There's no talk of condoms in local Catholic schools.

Middle school parents are provided sexuality-related biology lessons to talk about at home, when the children are ready, Whalen said.

The material is based on the teachings of St. Pope John Paul II and speaks of "the dignity of the human person and body," she said.  "It explores who we are as children of God, how we show respect for each other and the reasons for sexual morality."

Families who pay for their children to attend Colorado Springs Christian Schools subscribe to the faith-based teachings, DeRenzo said, and look to the school to “reinforce what the family wants to do.”

To meet today's demand for flexibility and choice in education, his school system rolled out an online platform last spring when schools were required to close, as a “beta test site,” with all students and parents onboard. The exclusive online program continues as an option this school year, with curriculum mirrored to classroom instruction.

“We’re using it for military families or others who move, so we have students all over the country,” DeRenzo said.

The University School's Sutherland said with greater choice, participation in homeschooling has spiked nationwide, which also has been good for her school.

“Families are getting around tables and doing cooperative learning,” she said. “There are pros and cons to each decision, however, parents are far more educated about different learning options and meeting the needs of their individual students.”

One piece of advice DeRenzo always gives parents: “Make sure you’re not running away from something, but you’re running to something.”

The Colorado Springs-based Association of Christian Schools International also is tracking what's shaping up to be a developing trend.

The association reported in December 2020 enrollment growth among a chunk of its members, which include 2,057 American schools and 159 international schools, according to spokeswoman Caitlyn Berman.

“This could suggest an influx of students from other educational sectors, whose families chose Christian schooling over other options that would have been available to them that fall,” she said in an email.

The association, which supports Christian schools and educators with materials and training programs to help children grow spiritually, academically and culturally, does not yet have enrollment statistics for this semester, Berman said.

As further indication of increasing popularity of Christian schools, an association tuition and salary survey showed that about $453,000 in school choice dollars the median schools received in the 2020-2021 school year reflects an increase of nearly 50%.

“This suggests that more parents are exercising choice and enrolling their children in Christian schools,” Berman said.

In its 44th year of operation, Springs Baptist Academy in Colorado Springs has seen year-over-year growth for the past seven years, and this semester marks the largest enrollment ever, said Brother Tom Tolbert, principal, in a letter to parents.

A new independent Catholic high school, St. John Paul the Great Catholic High School, will open in Denver next fall, according to the Archdiocese of Denver.

"Ideological forces have radically altered the present state of education — and a new response of robust Catholicity is required," the Denver Catholic article said.

Not all Christian schools fared have fared well, though.

In the 2019-2020 academic, 42 schools in the Association of Christian Schools International closed, Berman said, and 17 closed last school year. So far this school year, just one has shut down.

“It seems miraculous it came together during COVID,” said Headmaster Mark Langley, who also has launched classical Catholic schools in Massachusetts, New Hampshire and Ohio.

Chesterton Academy of Our Lady of Walsingham opened this semester in leased space inside St. Gabriel the Archangel Church, a stone’s throw from the Academy School District 20’s Liberty High School in Briargate.

Already, more students than anticipated have enrolled, Langley said, with 26 students this semester and more interested in upcoming semesters.

Chesterton Academy in Colorado Springs is one of seven that opened as part of the network this year. It's the network’s second in Colorado, with Littleton also having a Chesterton school, and it became the 34th in the world.

The college preparatory Catholic high school focuses on “timeless education” using ancient texts, with technology, such as cell phones and computers, left at the door.

Hot topics such as critical race theory are viewed “in light of what came before,” Langley said.

“All of these movements may seem brand new, but they’re rooted in the philosophers and theologians of the past, who disagreed among themselves,” he said.

“A lot might think it’s an education in monolithic thinking, but it’s really a study in debate and disagreement.”

Students are taught to stand when visitors enter the classroom. They use intellectual tools, not a calculator or a smart board, to undertake 4th century BC Euclidean geometry, and the ringing of a brass bell marks passing periods.

“We really like the classical curriculum — we think it’s really important our children be formed in the idea of becoming fully human, learning about who they are and preparing for all aspects of life,” said parent Karin Pokorny.

She enrolled her 9th grade son, the youngest of five children, in Chesterton Academy in Colorado Springs because she considers it to be the best of both worlds.

“The education is about living goodness, creating beauty and knowing truth, and that’s what makes us deeply human,” Pokorny said.

“To have that within the context of a Catholic setting, that’s a dream come true. This school was really an answer to prayers for us.”