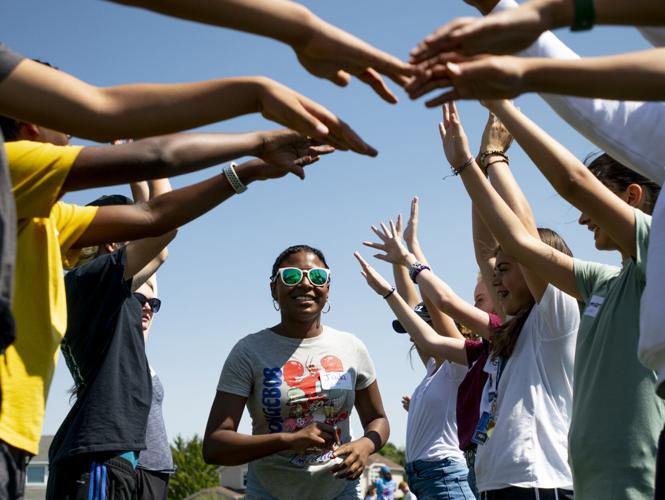 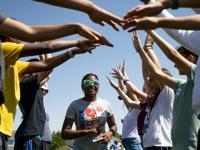 Eighth-grader Jada Jackson runs through the wave of trust during an afternoon of alternative learning at Community Middle School on Tuesday, Sept. 6, 2022. After two years of online learning and missed social opportunities because of the Covid-19 pandemic, eighth-grade students participated in a series of community-oriented trust-building activities. 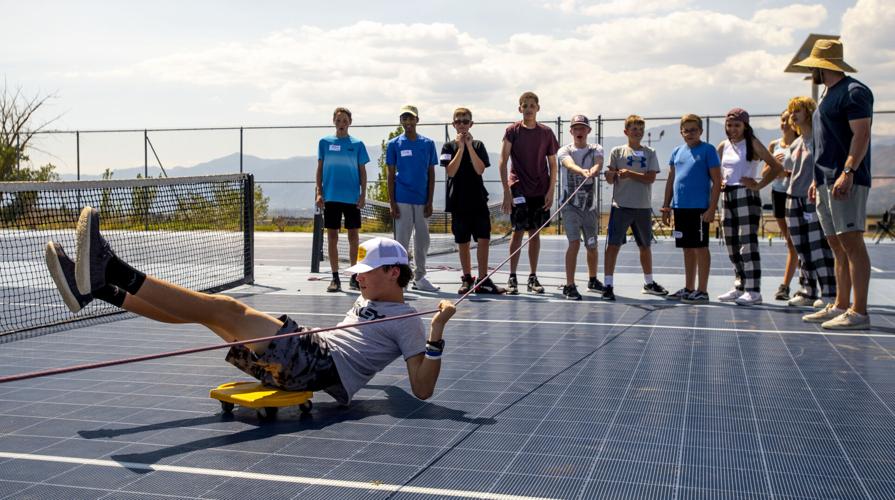 Wyatt Pittman balances on a scooter as he tries to pull himself across a tennis court with a rope held by his classmates on either end. The students had to work as a team to get everyone across the court without touching the dark blue section of the floor. 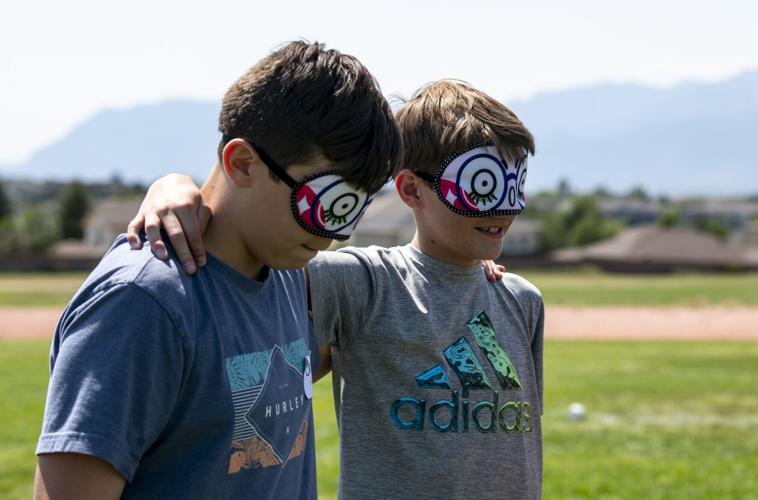 Chance Langford, left, and Jay Cherrington hold on to each other as another classmate guides them through obstacles as part of a trust-building activity on Tuesday, Sept. 6, 2022. 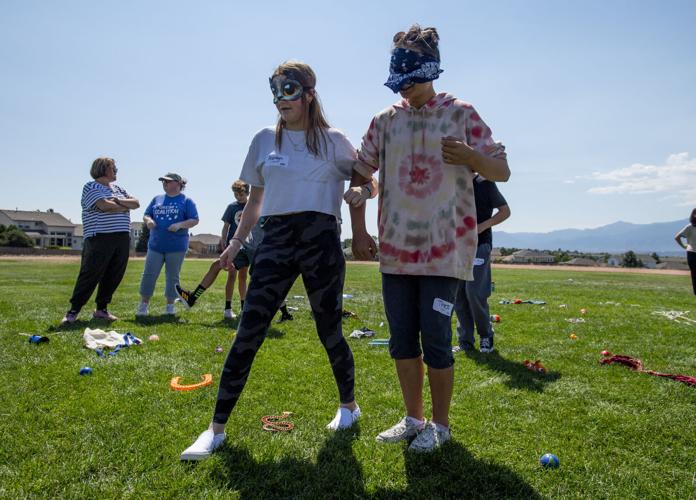 Ashlyn Anderson, left, and Theo Ryberg link arms as they are guided by another classmate through obstacles during a trust-building activity on Tuesday, Sept. 6, 2022. 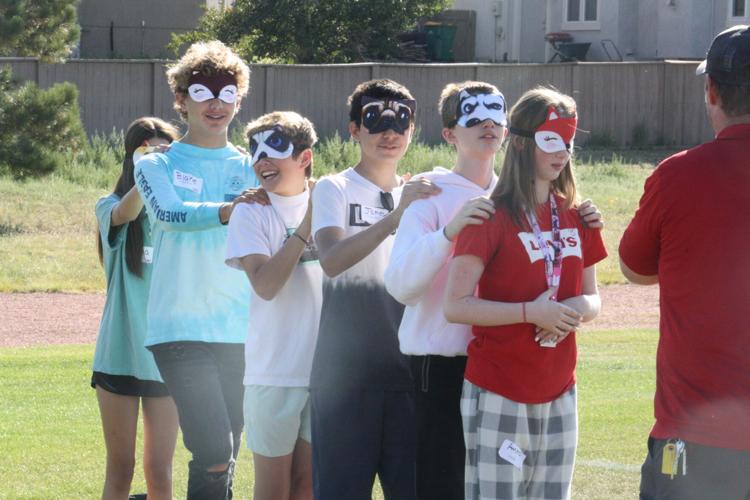 Blindfolded eighth-graders conduct a trust-building exercise during an "Adventure/Leadership" event at Challenger Middle School on Tuesday, Sept. 6. The event was designed to help offset some of the social opportunities the students missed during COVID.

Challenger Middle School on Tuesday held an “Adventure/Leadership” event that educators hope will help eighth graders make up for some of the experiences they missed during the closures brought on by the COVID-19 pandemic.

This year’s eighth grade students were sixth graders at the height of the pandemic and were forced to miss critical orientation time. They also missed out on field trips and other events that are key to social development, according to Challenger principal Debbie Holt.

“These students spent much of their sixth grade year in virtual learning, so they missed out on so much of the interaction you get when you’re onboarding,” Holt said. “This (event) is to offset some of that — to help build relationships, build leadership skills and develop problem-solving skills as they learn to work together.”

The first semester of sixth grade can be a difficult transition for students. They’d been the oldest and biggest kids at their elementary school just a couple of months before; now, they’re suddenly the youngest and smallest. They have to get accustomed to a drastically different learning structure, navigate crowded halls during “passing periods,” and learn to interact with unfamiliar students and teachers.

That’s under optimal conditions, and the 2020-2021 school year was far from optimal, Holt said.

“Transitioning from elementary school to middle school means learning a whole new set of skills, and some of those skills can only be learned by working alongside other students,” she said. “That’s a big part of what we’re doing today.”

Challenger staffers have been planning the adventure event since March, Holt said. Teachers held a training session last week to go through the exercises themselves and learn to facilitate the groups.

Divided into small groups, students were taken through a series of exercises designed to encourage teamwork, trust-building and communication. Each group was led by a teacher and an adult volunteer, but the grown-ups left the bulk of the problem-solving to the students. This allowed the youngsters to challenge each other, brainstorm, think critically, and learn to give and accept constructive criticism, according to Holt.

One exercise, called a “trust run,” was a team-building exercise where one student runs through a gauntlet of classmates with outstretched arms, trusting that they will move their arms out of the way before the runner makes contact. In another exercise, students guided a blindfolded classmate through a field of obstacles, using only verbal instructions.

Several other exercises were designed to allow the students to spend the day away from their desks, get some fresh air and exercise, and talk to each other.

After each exercise, the students sat in a circle and discussed what went right and what went wrong. Guided by the teachers and volunteers, they also brainstormed ways to improve their performance.

“Not good,” Maestas said of his first year at the Academy School District 20 middle school. “You couldn’t talk to anybody. You could only text, and not everybody has phones.”

Maestas, 13, said he enjoyed the temporary freedom from the bounds of the classroom on Tuesday.

“It’s pretty important, because last year, we missed our field trips,” he said. “This kinda gets us a little bit of exercise and we can socialize with each other.”

The exercises helped teach Maestas the value of teamwork, he said.

“You can’t always do everything by yourself,” he said. “Sometimes you need help from your friends.”

Holt said she hopes teachers and students will be able to use Tuesday’s lessons throughout the school year.

“The teachers will be able pull in the lessons that are learned today and appropriate them into their classrooms,” she said. “This will not only help the students this year, but we hope it will better prepare them to go to high school next year.”

Teachers, parents and activists implored the State Board of Education to consider reinstating LGBTQ+ references in the social studies standard…