Colorado Springs city contractors are expected to start work this summer on the long-awaited completion of the Centennial Boulevard extension to connect it to Interstate 25 at Fontanero Street, officials said Monday.

Centennial Boulevard, a major north-south connection on the northwest side, dead ends just south of west Fillmore Street. The $20 million extension of the more than half-mile of roadway will potentially relieve traffic congestion, said Aaron Egbert, project manager and senior engineer for the city. The work will be funded through the Pikes Peak Rural Transit Authority, which collects a dedicated 1% sales tax on goods and services in El Paso County.

"We're anticipating it to help other corridors. When we open the road on day one, we're expecting about 17,000 vehicles a day to use this road," Egbert said.

As a result of its new connection to the interstate, the Fontanero Street interchange's name will change to the Centennial interchange, he said.

The extension is expected to relieve traffic on north Chestnut Street, a residential road, that serves a frontage road in the area, particularly when the interstate is backed up. It will also take pressure off of the Fillmore Street interchange and may relieve congestion on Garden of the Gods Road, Egbert said.

However, the city can't fully predict traffic changes. It will take opening the road, scheduled about 18 months after the start of construction, to fully understand how traffic patterns will change, he said. 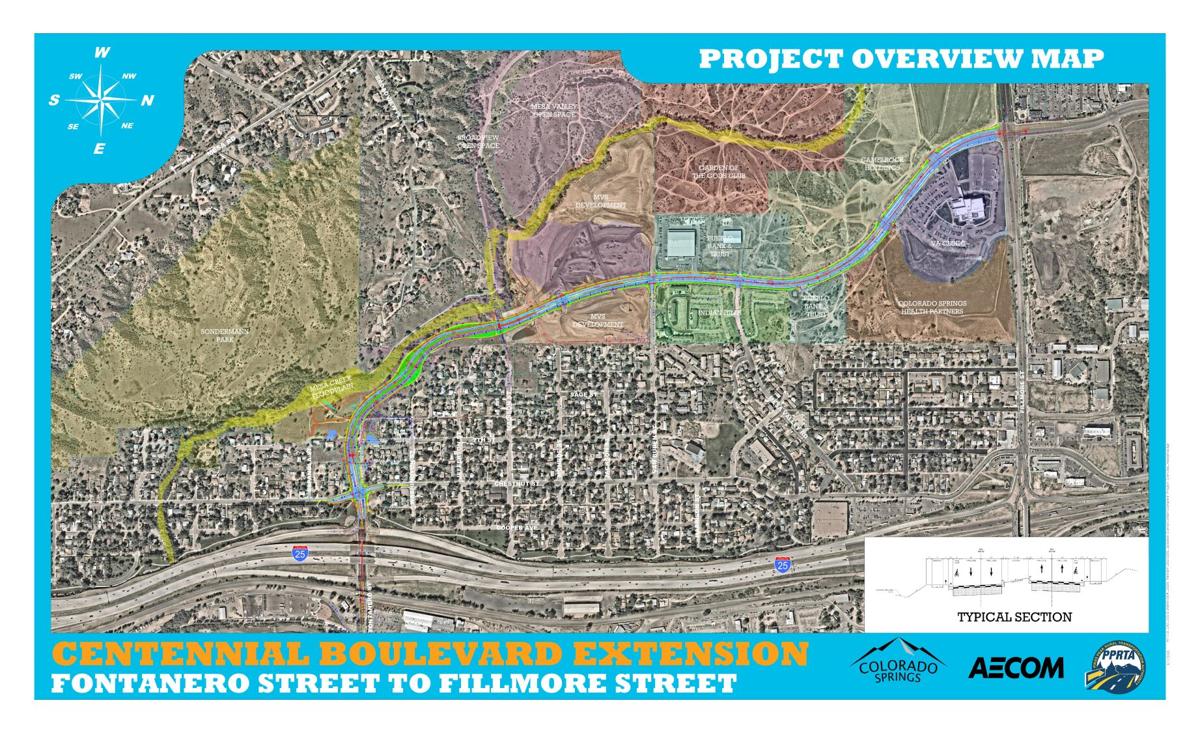 The extension has been planned to serve the area for decades, but its design has changed with the times.

Rather than providing six lanes as originally planned, it is expected to have four, two in either direction. Those lanes are to include four feet on either side set aside for bike lanes, a 10-foot separated sidewalk and a pedestrian crossing, Egbert said. The new layout will allow residents to cross Centennial mid-block near Madison Street and walk south down the sidewalk on the westside of the new road to the Sondermann Park.

Traffic lights are planned at Chestnut Street and Interstate 25, according to city plans. The only neighborhood streets that will connect to Centennial are Chestnut Street, Van Buren Street, and Mesa Valley Road.  The speed limit along the new extension will be 35 mph.

To help make way for the road, the city acquired more than 40 properties and demolished three houses and other structures, including a closed restroom at Sondermann Park, which contributed to the overall cost of the project, Egbert said. The road will cross into former Sondermann Park property in one area. However, the city is trading other property along the new road to the parks department to make up for taking parkland, Egbert said.

The city has agreed to contract with a local developer to clean up a former informal dumping ground for trash, which included a huge pile of tires, that developed along the planned route ahead of road construction, he said.

Once completed, the road could provide access to new single-family homes, apartments and other development, Egbert said. Mountain Metro Transit also plans to move their route from Chestnut to the new road and serve new stops along it, Egbert said.

Construction will extend from Fillmore to Van Buren where Centennial exists but needs to be finished, and continue south of Van Buren, where the greenfield construction will start, he said.

The construction schedule for the road has not been set, but a contractor will be selected based on plans to mitigate impacts to the surrounding residents, he said. Road closures are also expected at the Fontanero interchange, he said.

More information about the work will be presented from 5:30 to 7 p.m. March 10 during an online meeting. To pre-register for the meeting visit coloradosprings.gov/centennialblvdextension.