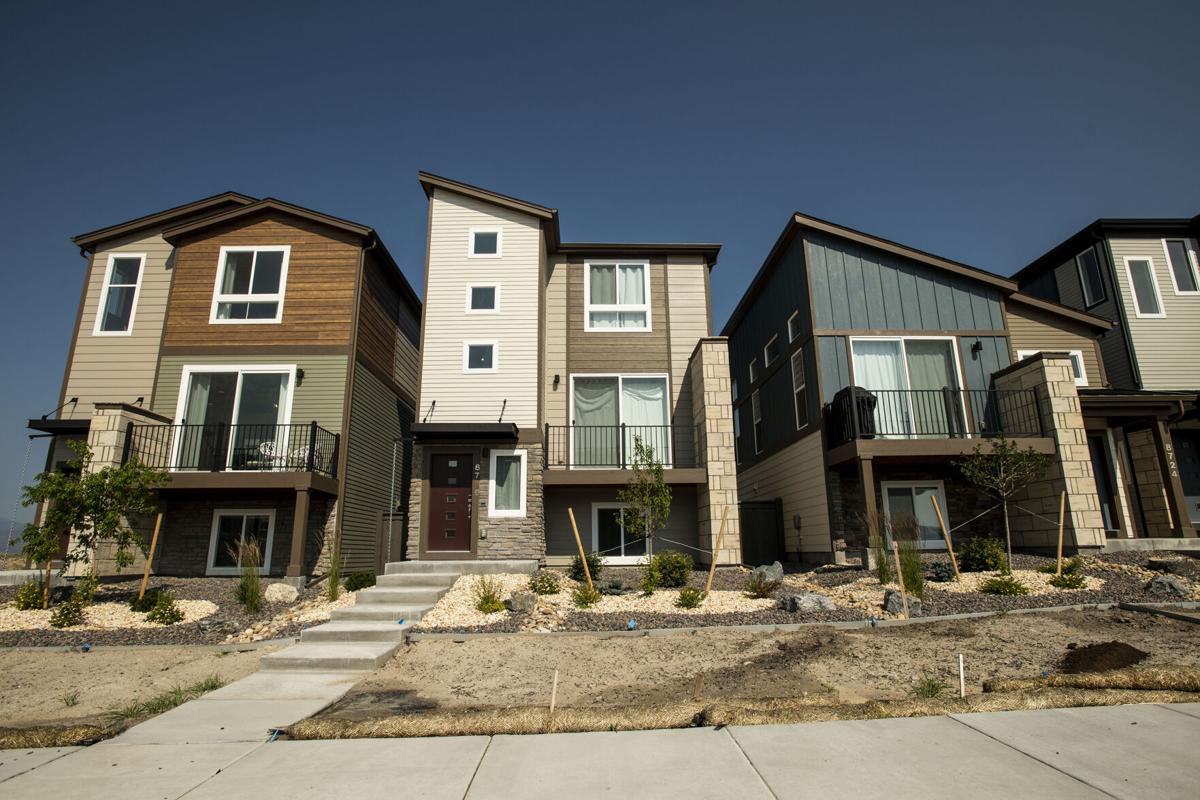 Single-family, detached homes that are taller, narrower and built on smaller lots are being developed as part of Classic Cos.' Midtown Collection in a portion of Wolf Ranch, west of Research Parkway and Black Forest Road in northeast Colorado Springs. Classic and other builders tout the homes as a more affordable option at a time when housing prices are soaring. CHANCEY BUSH, THE GAZETTE 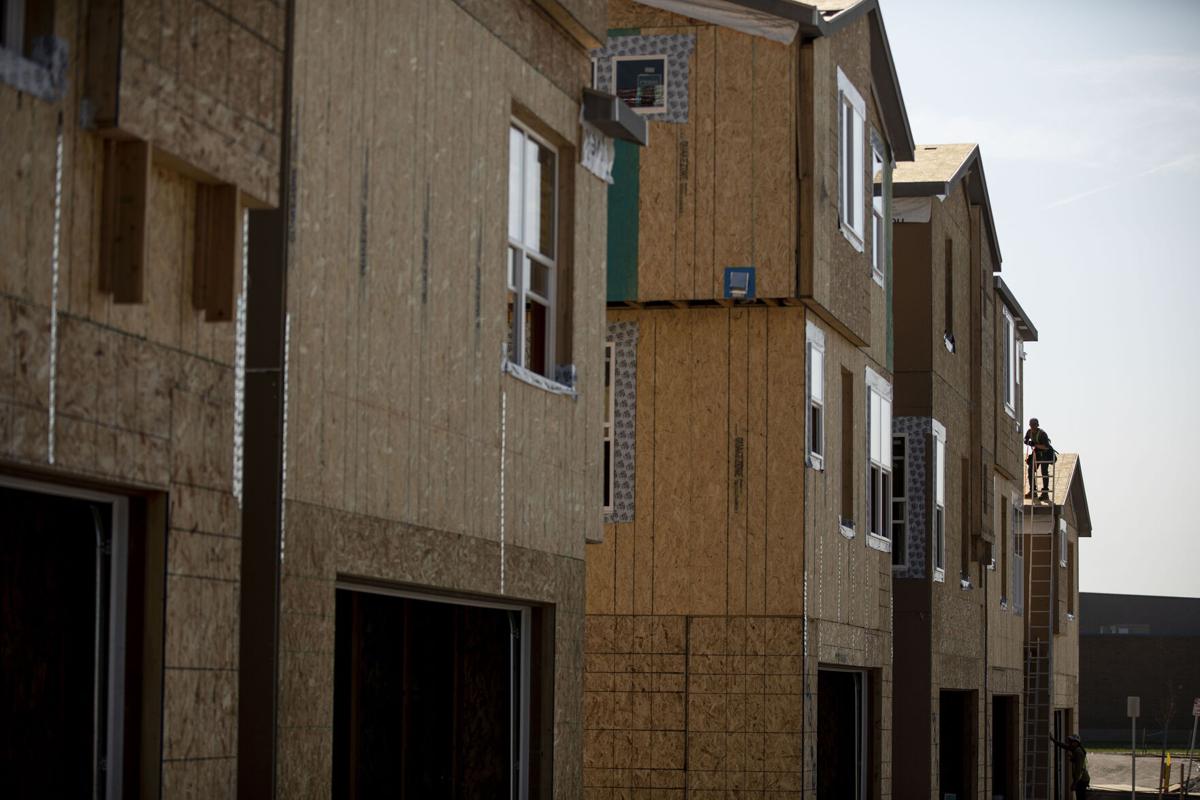 Classic Cos. is building its Midtown Collection of single-family homes — a taller, narrower, urban-style residence — in a portion of the Wolf Ranch development, west of Research Parkway and Black Forest Road on Colorado Springs' far northeast side. The homes are built side-by-side and close together in a denser development, yet homebuyers still have the privacy that comes with a single-family, detached home. CHANCEY BUSH, THE GAZETTE 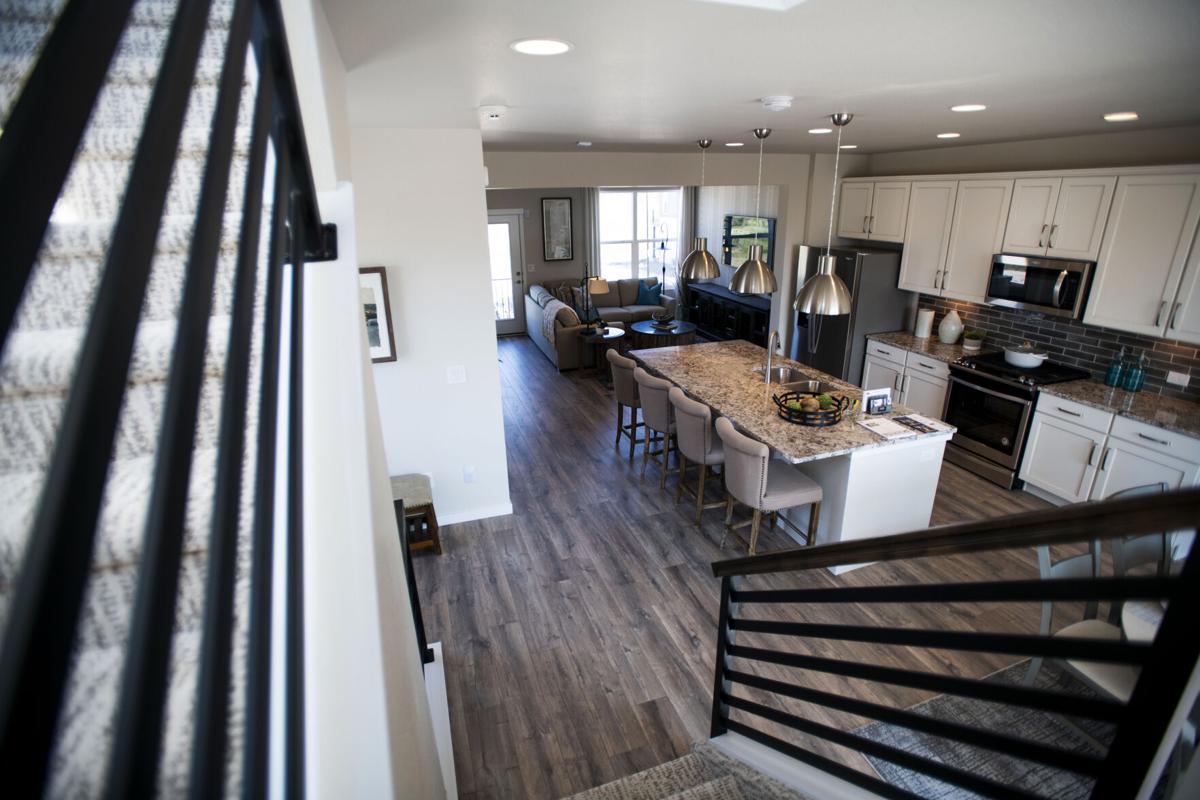 The interior of a Midtown Collection model homes is on display last week at the Wolf Ranch development in northeast Colorado Springs, west of Research Parkway and Black Forest Road. Homebuilder Classic Cos. of Colorado Springs launched its Midtown Collection homes — a taller, narrower, urban-style single-family residence — three years ago and has sold the homes in four Springs neighborhoods. CHANCEY BUSH, THE GAZETTTE 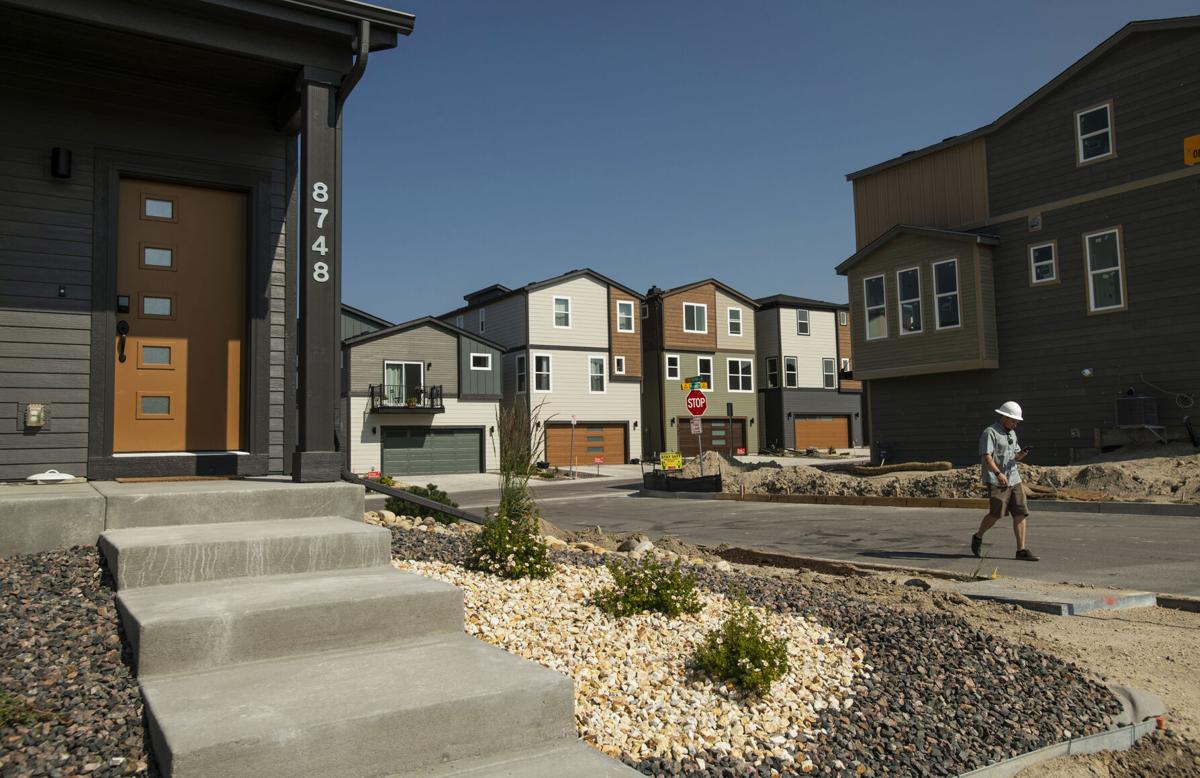 Single-family, detached homes that are taller, narrower and built on smaller lots are being developed as part of Classic Cos.' Midtown Collection in a portion of Wolf Ranch, west of Research Parkway and Black Forest Road in northeast Colorado Springs. Classic and other Springs-area builders tout the homes as a more affordable option at a time when housing prices are soaring. CHANCEY BUSH, THE GAZETTE

But finding an affordable place to live these days remains one of the biggest challenges faced by Colorado Springs buyers.

Prices for local resale homes, which climbed to $450,000 in June, have set record highs each of the last five months. New home prices have skyrocketed, as well; spiking lumber, building material and labor costs have made it tough to deliver homes under $400,000, builders say.

That's why some builders are offering an alternative home design they say gives buyers a more affordable option.

One builder calls them urban-style homes — two- and three-story residences that are taller and narrower than traditional suburban homes, with a look and feel akin to townhomes or even East Coast rowhomes.

They're built side by side on smaller lots and in a more densely packed fashion, with maybe 6 to 10 feet between them, depending on the builder.

Despite their cozy layout, the urban-style residences don't have common walls — like townhomes and apartments — and buyers still have the privacy that comes with owning a single-family detached home, some Colorado Springs builders say.

Even as they're touted by builders as more affordable, the homes still aren't cheap. Most also have little or no front or back yard and their square footage can be smaller than what's found in typical suburban areas.

Still, some of the homes can be had for several thousand dollars less than some of their suburban counterparts, while some buyers will have less maintenance than if they owned a wide-lot, suburban-style property, builders say.

"The main concept is just affordability," said Joe Loidolt, who heads homebuilding for longtime Colorado Springs builder Classic Cos. "One of the most obvious ways to get affordability is to have higher density product. I doubt everybody wants to live in a townhome with attached walls. Our initial concept wasn't anything more unique than just saying, 'let's take a typical townhome, a rowhome scenario, and pull them apart by 6 feet.'"

Classic launched its Midtown Collection three years ago and has sold the homes in four Springs neighborhoods. Classic constructs about 10 Midtown homes per acre, compared with roughly three to four homes per acre — depending on their building and lot size — in some of its other communities, Loidolt said.

In effect, Classic needs less land upon which to build its Midtown homes, which means it can sell the houses for lower prices, he said.

The smallest Midtown Collection home under construction and available in the north side Wolf Ranch development totals 1,304 square feet on two levels and sells for $398,300, according to the Classic Cos. website. The largest Midtown home at Wolf Ranch, a three-story floor plan with 2,130 square feet, is priced at $456,100.

Challenger Homes, another longtime Colorado Springs builder, markets its Ascent Collection at its Chapel Heights development, northeast of Academy and Fountain boulevards on the city's southeast side and on the campus of the former Nazarene Bible College.

But Challenger's marketing strategy is similar; the company is constructing eight to 12 houses per acre, compared with five per acre in a typical neighborhood, he said. That allows Challenger to offer its Ascent homes at lower prices.

"The land cost is much lower, which is a major part of the cost of a house," Hennessy said. "It still allows us to deliver the same square footage for a little bit lower price."

The Challenger and Classic urban-style homes typically have two to three bedrooms (additional bedrooms and bathrooms are optional, depending on the floor plan), garages tucked underneath the house and ground-floor flexible space.

Classic's homes have a second-level balcony and small front yards that are xeriscaped, with minimal landscaping. Challenger's homes might have a small yard, though another area of urban-style homes developed by the company northwest of Powers Boulevard and Platte Avenue had more traditional yards.

Denver-based Oakwood Homes also has a collection of urban-style homes it's building in the Banning Lewis Ranch development, southeast of Woodmen and Marksheffel roads.

Houston-based David Weekley Homes, meanwhile, plans to introduce its version of a higher density, two- and three-story home at its new Trails at Cottonwood Creek development, a gated community planned southwest of Woodmen Road and Austin Bluffs Parkway. Sales are expected to start in the fall and model homes are under construction.

David Weekley's project is meant to fit the irregular topography of the 15-acre site, which slopes downward and to the south toward Cottonwood Creek, said Dustin Nelson, the company's Colorado Springs division president.

Vertical homes on smaller lots will allow the company to maximize use of the land and develop more homes, which still will range in size from 2,000 to 2,800 square feet, Nelson said.

If it had sought to develop the Cottonwood Creek site with larger lots and traditional, suburban-style homes, the company would have produced fewer homes and been forced to charge seven-figure price tags to cover its costs, he said.

Prices haven't yet been determined, though Nelson said he expects the Trailside at Cottonwood Creek homes will sell for less than other David Weekley styles, though possibly more than those of Classic and Challenger.

Builders say the urban-style designs appeal to a cross section of buyers — singles, young married couples and families — who are attracted by the prices, even as some of the homes easily top $300,000.

The homes also have their tradeoffs, builders say.

If you want a large backyard for parties and barbecues, you won't find it at these homes. Yet many people like the idea of not mowing a lawn or pulling weeds on the weekends.

"Some of them have kids," Hennessy said of urban-style homebuyers, "but probably the majority of them don't. So, it's, 'I'm going to go work, I don't want to spend my weekends doing yard work. I want to go out with my friends. I want to hike the mountains.' They want to be active and be social and not spend time maintaining the yards of their house."

"You can just hop on the trail and be in Cottonwood Park or Venezia Park in minutes," Nelson said.

From In-N-Out to downtown hotels; Colorado Springs commercial construction not slowing down

Also expect to do a lot of walking up stairs to reach living rooms, kitchens and bedrooms, and not every buyer will want to make the up-and-down trips.

"There are certainly those buyers," Hennessy said. "And then there's the opposite, the people who really like the three-story living."

The homes aren't just for young buyers; builders say they've also caught the eye of empty nesters, who might be downsizing and looking for a less expensive house and don't want to worry about their yards.

Elena Sanders, who recently bought a two-level Midtown Collection home at Classic's Wolf Ranch development, is moving to Colorado Springs from New  York's Long Island to be close to her daughter and family, who also live in Wolf Ranch.

An assistant for several types of medical specialties, such as urology, plastic surgery and vascular surgery, Sanders will leave behind a larger two-story, four-bedroom, three-bathroom home with a finished basement when she moves to Colorado from New York.

But she's looking forward to the reduced maintenance that comes with her Midtown home, along with its amenities — a spacious floor plan, high ceilings and lots of natural light, she said. Townhomes have little maintenance, too, but Sanders said she didn't like the idea of sharing a wall with a neighbor.

"It's great looking,' she said of the Midtown home. "It's a very, very cool, modern home. I loved the appearance, I loved the look, I loved the functionality."

And, she said, "it's a free-standing unit. Very private. Even though your neighbor is right next to you, but still, you are on your own."

Classic's Midtown Collection represents about 20% of the company's home styles, and Loidolt said he expects that figure to grow. In fact, Classic has another urban-style, high-density home product that it plans to soon add to its portfolio, he said.

Challenger's Ascent homes make up about 15% of the homes it sells and closes on, Hennessy said, though he doesn't expect that figure to increase much more.

"We have people that love it, that go, 'wow, I really like it, it's really cool,'" Hennessy said. "And then we have people that say, 'you'd never catch me living there.' It's not your standard single-family home that 80% of us would probably live in. It's built for the specific person looking for the low maintenance, the affordability."