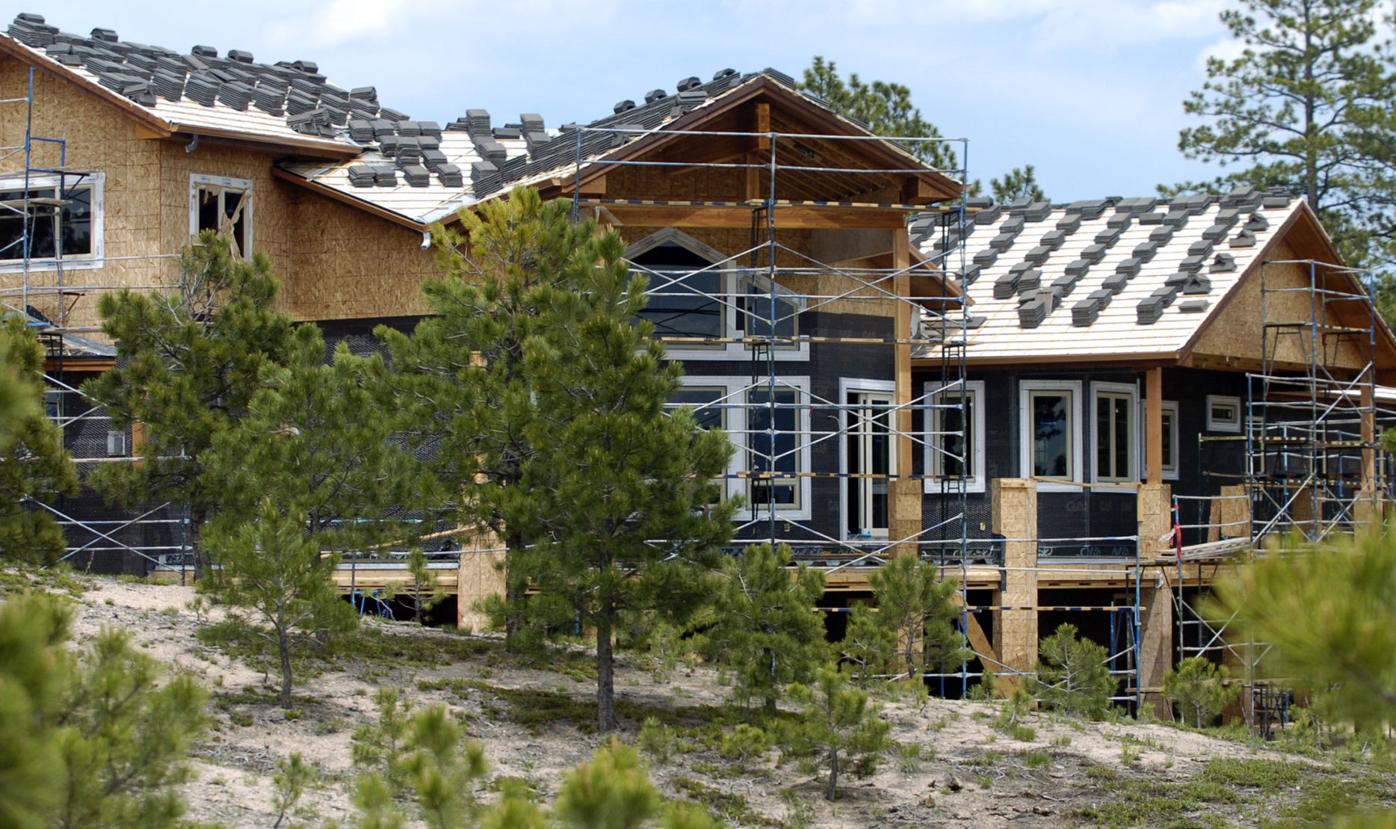 A home under construction in the Cathedral Pines development in Black Forest is shown in May 2007. 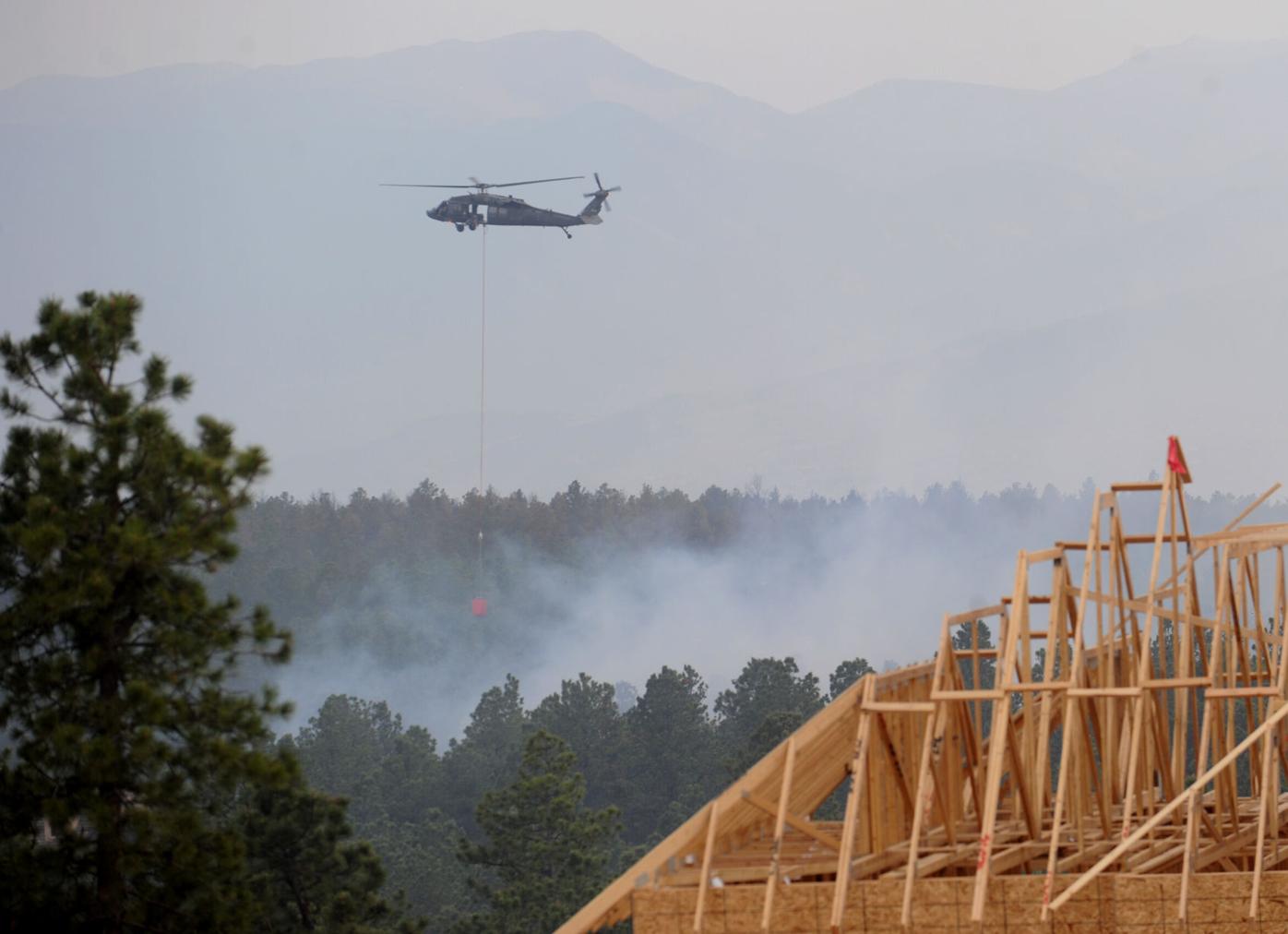 A helicopter drops water on a hot spot in the Cathedral Pines neighborhood on the third day of the Black Forest fire on June 13, 2013.

A home under construction in the Cathedral Pines development in Black Forest is shown in May 2007.

A helicopter drops water on a hot spot in the Cathedral Pines neighborhood on the third day of the Black Forest fire on June 13, 2013.

A group of residents in Black Forest are worried that the current draft of the new El Paso County Master Plan does not address their concerns about increased density in the forest, which they say would pose higher wildfire hazards and could strain water supply.

Much of Black Forest was identified in the draft plan as a “large lot residential” area, one of 12 different place-types that classify specific areas of the county based on their character, scale, form and function.

The “large lot residential” place-type “consists almost entirely of residential development and acts as the transition between ‘rural’ and ‘suburban residential’ areas,” the plan states.

The plan currently suggests a minimum lot size of 2 ½ acres within the forest’s timbered areas, but the Friends of the Black Forest are requesting county planners change the minimum lot size to 5 acres, arguing denser development there presents fire, water and wildlife concerns.

“It’s an advisory plan, it’s not directive,” Stokka said. “But the statement that says in the timbered area lots should be no less than 5 acres per lot, that doesn’t sound very advisory to us.”

“The minimum lot size may be 2 ½ acres, but the plan says new development must be compatible with existing development,” El Paso County Planning and Community Development Executive Director Craig Dossey said. “We aren’t saying that we’re going to go down to 2 ½-acre lots all across Black Forest. This plan creates better expectations for those areas.”

But Stokka said compatibility between developments must be better distinguished.

As defined in part by the El Paso County Land Development Code, “Compatibility does not mean ‘the same as.’ Rather, compatibility refers to the sensitivity of the proposed use, activity or design in maintaining the character of existing development within the vicinity.”

“Compatibility is only a concept. We’re saying we have to have some numbers in here that will say what the rules are. We can’t just have concepts,” Stokka said.

Dossey said compatibility between developments has more to do with how to transition to new development, while zoning laws “set a firm line on lot sizes.”

Stokka said he was concerned that if the new El Paso County Master Plan didn’t specify 5-acre lot minimums in Black Forest it would pave the way for denser development there. In the past, he said, the county has sometimes ignored the Black Forest Preservation Plan’s guidance for 5-acre lots when approving new developments like Cathedral Pines and Sanctuary in the Pines.

“There are examples where densities were higher, but it’s a trade-off because we get bumper areas,” Dossey said.

One compromise would be more clustered development in Black Forest, Stokka and Dossey said.

Incorporating the concept of “overall density” in Black Forest would mean the average parcel size or density is kept at or above a determined threshold, the Black Forest Preservation Plan states. Developers could then “cluster” lots or structures on only a portion of the property, leaving more open space. Clustered developments would share utilities like water and wastewater services, depending on the subdivision or area of the county, according to the draft master plan.

“If you encourage conservation design, typically what comes with it are more well thought out covenants” that restrict “undesirable” development, Dossey said.

Clustering “leaves a lot more open space and undeveloped forest, and that, to us, is good,” Stokka said.

A second concern among members of the Friends of the Black Forest was that Flying Horse North in northern Colorado Springs was identified in the draft county master plan as an area with “potential for annexation.”

“This is no more a potential for annexation than any other area, and furthermore, it is over a mile from the nearest city limits,” Stokka wrote in a March 24 memo sharing the group’s input on the plan. He worried if Flying Horse North was annexed it might lead to portions of Black Forest, which is adjacent to the development, being annexed into Colorado Springs.

The county does not control annexation, even with a new intergovernmental agreement recently approved by the county and the City of Colorado Springs meant to help guide growth near the city boundaries and help protect the county's groundwater, Dossey said.

“That designation came from a map provided to us from Colorado Springs,” he said. “Far be it for us to say that it’s wrong. We want to map similarly. But (annexation is) a decision the property owner and Colorado Springs would have to reach.”

The public comment period on the master plan closed earlier this month, and the Master Plan Advisory Committee could still implement changes to the draft based on community feedback before the county planning commission gives its stamp of approval, Dossey said.

The revised document will be the version the planning commission will consider for approval during two special meetings at 9 a.m. on May 5 and May 26, Gebhart said. There will be opportunities for public comment.

The El Paso County Planning Commission will review the draft El Paso County Master Plan and consider it for approval at two special meetings on May 5 and May 26. The meetings will begin at 9 a.m.

Residents can watch and participate in the meetings remotely on the county’s website at elpasoco.com/news-information-channel or online at bit.ly/3e14zXW. Comcast customers can find the meeting broadcasted on Channel 59, while CenturyLink customers can tune into Channels 89 or 1089 to watch.

Those who want to provide testimony on an item being heard by the Planning Commission should email Tracey Garcia at traceygarcia@elpasoco.com or contact her at (719) 520-7940 with your name and best phone number to be reached at. Include any documents you would like provided to the hearing body as part of the official records. Note: New exhibits are not permitted via email the day of the hearing. All exhibits must be emailed to Garcia no later than one day prior to each of the above listed hearings.

Construction on Colorado Springs' eastern edge will march forward with potentially more than 1,700 homes over nearly 300 acres in Banning Lewi…