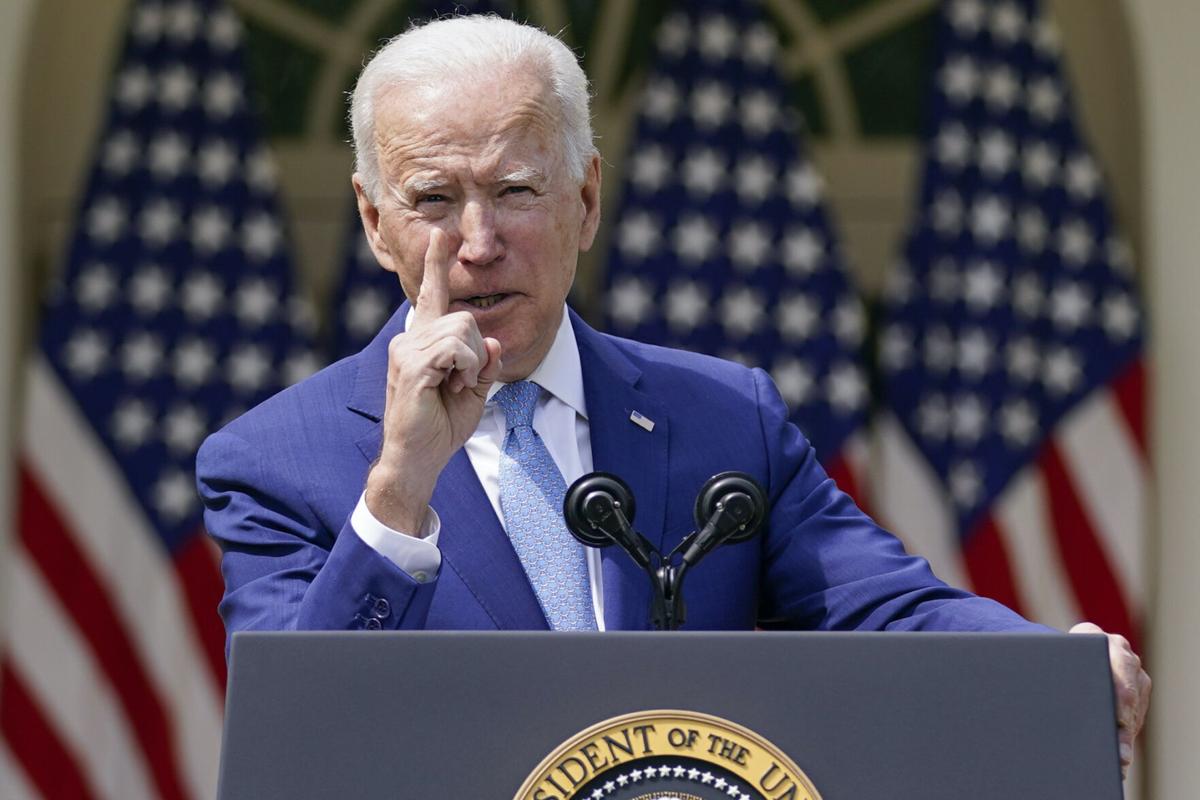 President Joe Biden speaks about gun violence prevention in the Rose Garden at the White House, Thursday, April 8, 2021, in Washington. 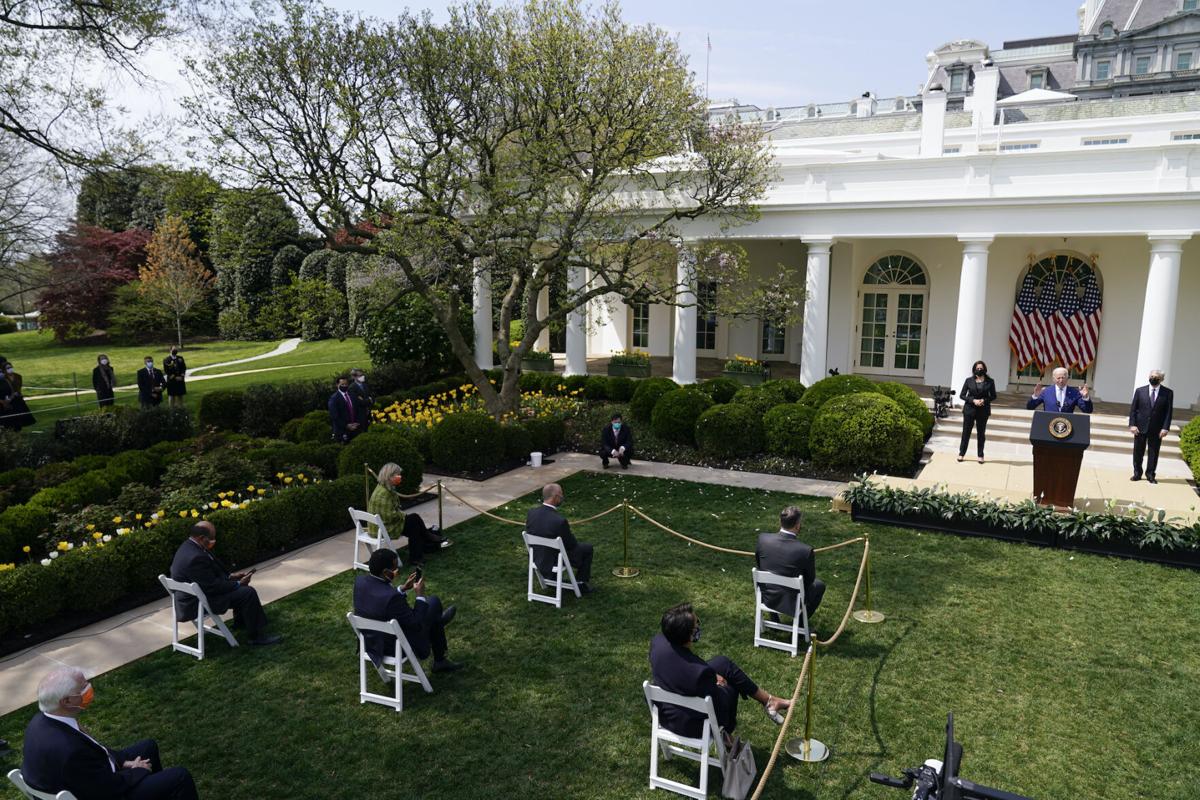 . U.S. Rep. Joe Neguse, D-Lafayette, is seated second from the left in the lower row.

President Joe Biden speaks about gun violence prevention in the Rose Garden at the White House, Thursday, April 8, 2021, in Washington.

. U.S. Rep. Joe Neguse, D-Lafayette, is seated second from the left in the lower row.

President Joe Biden announced Thursday that the weapon police say was used by the gunman accused of killing 10 people at a Boulder King Soopers last month will be subject to tighter federal regulation, part of a set of executive actions aimed at curbing what he called an "epidemic" of gun violence.

"A stabilizing brace makes the pistol a hell of a lot more accurate and a mini-rifle," Biden said. "It's more lethal, effectively turning it in to a short-barreled rifle. That's what the alleged shooter in Boulder appears to have done."

The man charged in the March 22 Boulder shooting allegedly used an AR-556 semi-automatic pistol, which was purchased legally, authorities have said. The gun can be made more accurate by using a brace while remaining concealable.

The brace is similar to collapsible stocks used on other variants of the rifle, but can be held against the forearm when it is used as a pistol. In 2011, the federal Bureau of Alcohol Tobacco and Firearms classified the weapon as a pistol, making it exempt from regulations on short-barreled rifles in place since the 1930s.

Those regulations make short-barreled rifles carry a $200 tax when purchased and require their owners to obtain a federal firearms license, subjecting them to fees and scrutiny from the ATF.

Attorney General Merrick Garland and the White House said the Bureau of Alcohol, Tobacco, Firearms and Explosives will publish a proposed rule within 60 days.

"Gun violence in this country is an epidemic, and it’s an international embarrassment," Biden said.

Neguse, a Lafayette Democrat, led a letter last week calling for the Biden administration to use its authority to regulate "concealable, assault-style firearms that fire rifle rounds." The letter was signed by more than 100 House Democrats, including U.S. Rep. Ed Perlmutter of Arvada, a vice chair of the Gun Violence Prevention Task Force.

In a statement, Neguse, one of seven lawmakers who attended Biden's announcement in the White House Rose Garden, said he was "grateful" the administration had included the request in its executive actions.

“The actions that President Biden has announced today will save lives, and are important first-steps in enacting common-sense, gun violence prevention measures,” Neguse said in a statement.

The administration also plans to release model "red-flag" legislation to make it easier for states to pass laws like one Colorado has allowing individuals or law enforcement to petition a court so police can confiscate weapons from someone deemed to be a danger to themselves or others.

Biden said he is nominating David Chipman, a former federal agent and longtime advisor to the gun control group Giffords, to direct the ATF, which hasn't had a permanent director since 2015.

Said Neguse: "In addition to these steps, it’s critical that the House and the Senate take bold steps to approve comprehensive gun violence prevention legislation. We must do everything we can to stop the epidemic of gun violence and frequent mass shootings that have plagued our nation for far too long.”

In recent months, Neguse has also urged the Biden administration to appoint a federal gun violence prevention czar to coordinate policy across agencies and to ban import of semi-automatic rifles and high-capacity magazines, but the president didn't address those topics Thursday.

Biden reiterated his call for Congress to pass legislation he described as wildly popular with the American public, including gun owners, urging the Senate to pass bills already approved by the House to establish universal background checks for firearms purchases and close a loophole that allows a buyer to take possession of a firearm if the FBI hasn’t completed a required background check within three days.

"Whether the Congress acts or not, I’ll use all the resources at my disposal," Biden said. "They’ve all been sending their thoughts and prayers, members of Congress, but they haven’t passed a single bill."

Reactions in Colorado to Biden's announcement split along party lines.

"Republican Attorney Generals, get ready to fight the Biden executive orders on gun control all the way!" tweeted U.S. Rep. Lauren Boebert, the Silt Republican and staunch Second Amendment advocate who owns a gun-themed restaurant in Rifle, ahead of Biden's remarks.

"I’ll be doing my part from the House! Let’s ensure we stop this tyrant."

“From proposing new federal rules that clearly violate the 2nd Amendment to nominating a gun-control zealot to head the ATF, it’s clear that President Biden is selling out law-abiding Americans and their right to keep and bear arms for the benefit of extremist gun-control groups who bought and paid for President Biden’s loyalty," Williams said.

"I grew up a hunter and served as an Army Ranger," he said. "I didn’t take my deer hunting rifle to Afghanistan, nor did I take my assault rifle deer hunting.

"Don’t be fooled by the gun lobby. The type of gun matters. Weapons of war have no place in our communities."

"David Chipman is a rabid anti-gun advocate and longtime gun control spokesman," Lamborn said. "It is clear from his nomination that the Biden administration is intent on completely destroying our Second Amendment. He should never be the director of the [ATF]."

“I have worked with Mr. Chipman on a number of occasions. He is intelligent, knowledgeable, accessible and has always been very helpful," she said in a statement, adding that his decades working as an ATF agent and years working for Giffords "make him uniquely qualified to be a dynamic leader of this critical agency."

This is a developing story and will be updated.

Dave Heath has noticed his business of private firearms education classes tends to boom after incidents that cause people to fear for their safety or worry they will lose their rights to possess guns.Right now, that has meant March’s massacre in a King Soopers on Boulder’s south side and President Joe Biden’s remarks calling gun violence in the U.S. an "epidemic" and "an international embarrassment."