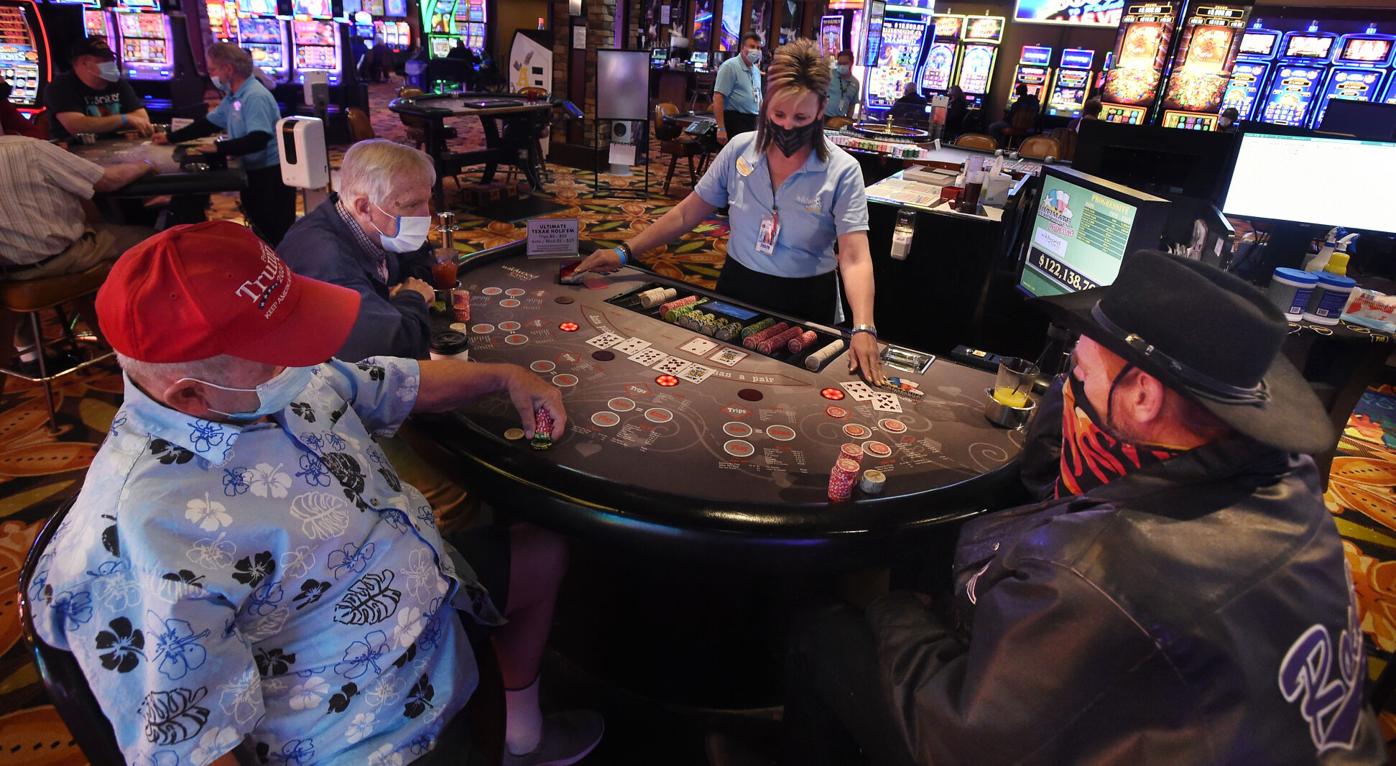 Dealer Deb Ortiz works the Ultimate Texas Hold ‘Em Table at the Wildwood Casino in Cripple Creek on Thursday, April 29, 2021. This weekend will be the debut of no-limit betting in three mountain gambling towns, including Cripple Creek, Black Hawk and Central City. (Photo by Jerilee Bennett, The Gazette) 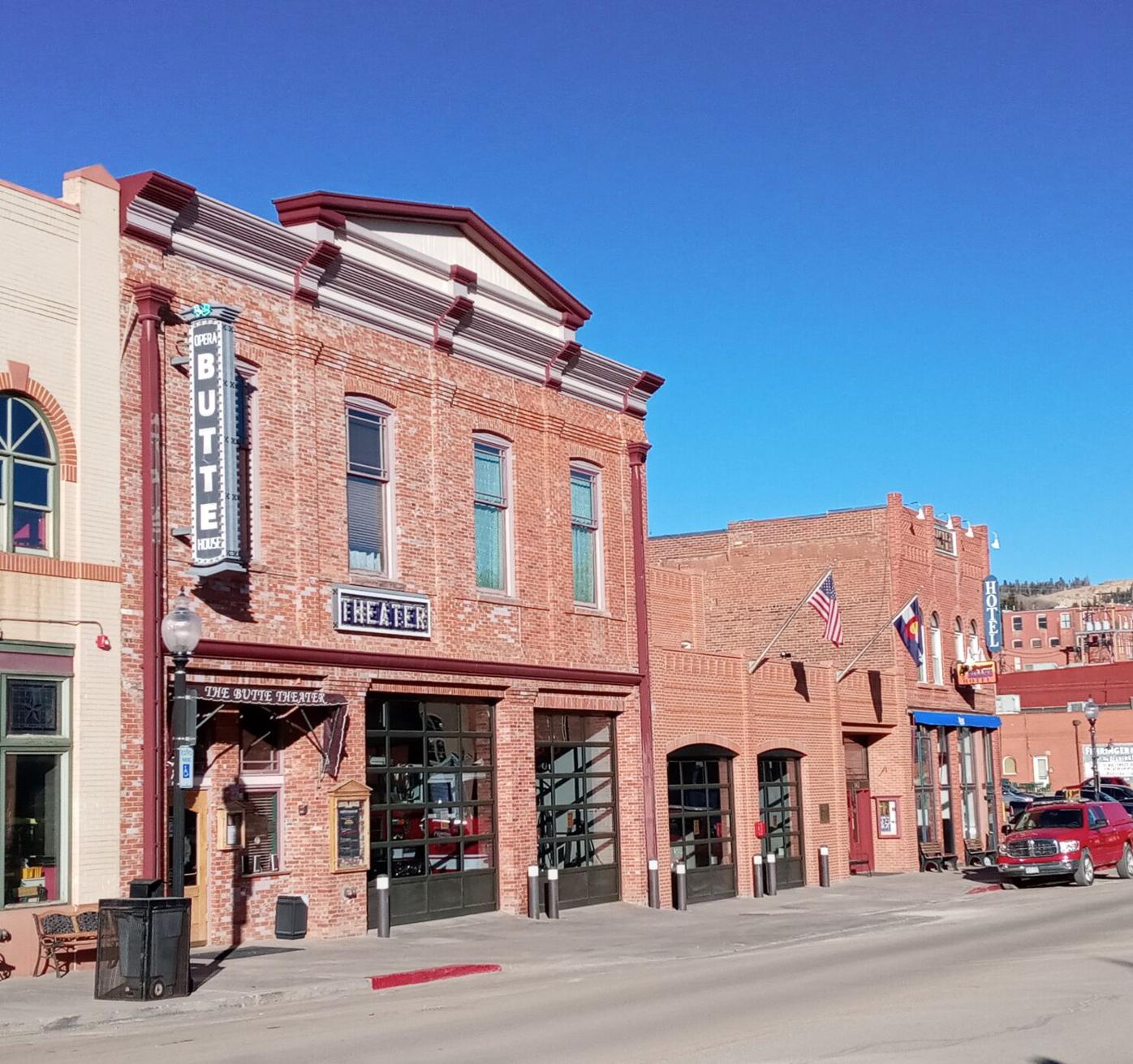 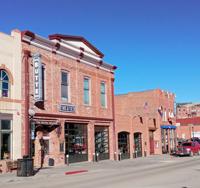 A portion of the fees the state collects from casinos is earmarked for historic preservation in Colorado’s three gaming towns. The Butte Theater in Cripple Creek is just one of the many the fund’s beneficiaries. 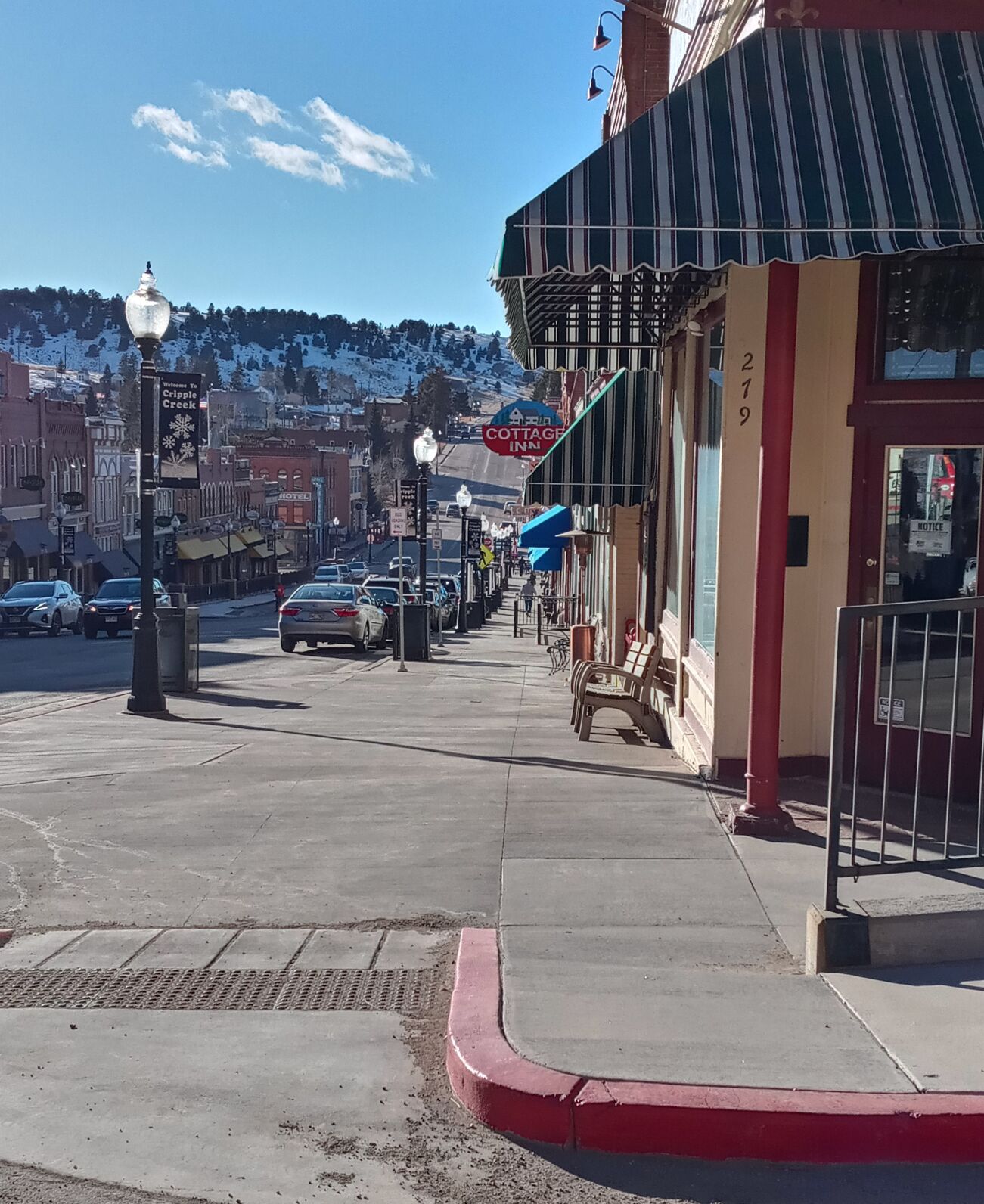 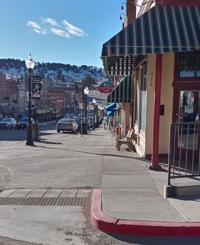 Cripple Creek officials and casino owners are hoping that the new games and unlimited stakes that will start in May when Amendment 77 takes effect will help bring people to Cripple Creek who might have gone to out-of-state casinos.

Dealer Deb Ortiz works the Ultimate Texas Hold ‘Em Table at the Wildwood Casino in Cripple Creek on Thursday, April 29, 2021. This weekend will be the debut of no-limit betting in three mountain gambling towns, including Cripple Creek, Black Hawk and Central City. (Photo by Jerilee Bennett, The Gazette)

A portion of the fees the state collects from casinos is earmarked for historic preservation in Colorado’s three gaming towns. The Butte Theater in Cripple Creek is just one of the many the fund’s beneficiaries.

Cripple Creek officials and casino owners are hoping that the new games and unlimited stakes that will start in May when Amendment 77 takes effect will help bring people to Cripple Creek who might have gone to out-of-state casinos.

Colorado voters have given casinos and three mountain gambling towns an early Christmas on Saturday with the debut of no-limit betting.

Don't expect bet limits to completely disappear — they will be set by individual casinos instead of state law. Most casinos are expected to adopt limits between $500 and $1,000 per wager, but likely will allow higher limits approaching $2,500 for their best customers, according to casino managers in Cripple Creek.

The higher betting limits and a host of new games were allowed starting Saturday under Amendment 77, approved by Colorado voters in November and also by voters in Black Hawk, Central City and Cripple Creek as well as city councils in all three towns.

The change has triggered a wave of investment in new hotels, bigger casinos and other amenities in all three mountain towns with casinos hoping to attract more gamblers and big spenders as the state emerges from the COVID-19 pandemic.

That's the first monthly increase since February 2020, before the pandemic forced gaming halls to close for three months amid the COVID-19 pandemic, according to data posted Thursday by the Colorado Division of Gaming.

Casinos in Cripple Creek expect big crowds this weekend. The higher betting limits coincide with warm weather forecast this weekend and an easing of pandemic restrictions that set capacity limits for casinos and restricted alcohol sales, said Jeff Mosher, director of marketing and special events for the City of Cripple Creek.

"The casinos really haven't started marketing the higher limits yet, so I'm not expecting to see a lot of high rollers this weekend," Mosher said. "I'm guessing we will see a lot more people who are just hoping to see someone win big. I don't think we will see a massive payout as soon as the limits are gone. It will likely be a slower process" that plays out over weeks and months.

Higher limits for slot machines will take a few days or a week to arrive as casinos install new software, which the Colorado Division of Gaming can't approve until after the change happens on Friday, said Matt Andrighetti, general manager of the Wildwood Casino.

Nor is Wildwood launching any new games right away. Instead, the casino plans to reopen its craps table this weekend, he said.

Bronco Billy's Casino plans to open a baccarat table in a month or two, after receiving approval from the Colorado Division of Gaming, said Baxter Lee, the casino's general manager.

"I don't expect it (no betting limits and more games) to have the immediate impact the changes made in 2009 did," Lee said, referring to an earlier vote that raised bet limits from $5 to $100, added craps and roulette and allowed casinos to operate around the clock.

"Part of that is due to how COVID has changed people's habits, but I believe these changes are a good thing," he said. "And the higher limits are a beautiful thing that would have more impact in normal times, which I hope will return at some point."

Cripple Creek is taking its time rolling out higher limits and new games amid a struggle struggling to hire more staff for poker, blackjack and other table games.

Most casinos are not operating table games around the clock, and probably won't for several more weeks, because they lack the staff to do so, Mosher said.

But the long-term promise of more big spenders from unlimited bets and additional games prompted owners of the Wildwood Casino to build a $14 million, 102-room hotel that is scheduled to open June 1 across from the casino.

Full House Resorts, which owns Bronco Billy's Casino, is spending $180 million to build a new upscale casino and 300-room hotel that is expected to open next year.

The Wildwood Hotel has been taking reservations for about four weeks and has hired some employees but is still looking for front-desk and housekeeping workers, Andrighetti said. Nightly rates in the new hotel will be $129 on weekdays and $159 on the weekends.

"We built this hotel to cater to the higher-limit player who wants to stay for a few days with more amenities," Andrighetti said. "It was a gamble for us because we started before the vote, but we thought it (lifting betting limits and adding new games) would happen."

The Chamonix Casino Hotel, scheduled to open late next year, is part of a $180 million expansion project under construction that will nearly double the gaming floor of Bronco Billy’s and add upscale hotel rooms, restaurants, a spa, rooftop pool, convention and meeting space and a parking garage.

Full House also said it plans to close Bronco Billy’s for up to four months for renovations after the Chamonix project is completed.

As for Central City, the change to no-limit gambling helped activate a long-shuttered casino building on Main Street and the mayor expects a financial boost to city coffers.

“It affects Black Hawk more than Central City, but this will definitely help,” said Mayor Jeremy Fey. “Even more than this, the sports betting helped quite a bit.”

The four-story building first built in 1992 after Colorado voters approved legal gambling has been shuttered since 2013, and the former owners donated it to the city.

The online listing for the property specifically cited opportunities for sports book and no-limit betting. The council is expected to approve the lease to Sprt Entertainment LLC on May 4.

“That wouldn’t have happened without these two legalization moves,” Fey said.

Central City, which had the most casinos in the state in the 1990s, now has the Grand Z, which prepped for Saturday with baccarat tables, and Century Casinos as its mainstays.

The city chose to enforce strict historical preservation guidelines for developers, which led most casino owners to develop high-rise resorts in Black Hawk.

Fey said most of the city’s gambling revenue comes from slot machines, and “very few people will bet more than a $100 on a pull.”

“That being said, the long-term potential is there and the market might evolve … (but) we are not on a trajectory to rival the economic benefits to Black Hawk,” he said. “We take pride in the decision maintaining the historical character of this town.”

In Black Hawk, the new no-limits stakes are expected to attract many of those hard-core gamblers who would otherwise head to Las Vegas.

“There’s tremendous upside for the city of Black Hawk,” said Mayor David Spellman. “With the limits lifted, and the full compliment of games available, we’ll be adding patrons from Denver metro, but also Colorado and regionally in general.”

Owners have been prepping for the weekend crowds.

“We’ve been hiring a lot,” said Dave Farahi, chief operating officer of Monarch. “We’re trying to get 300 people hired as the resort just opened. Table game dealers, IT, accounting, food and beverage and every position you can think of for the back house. We’ve been having job fairs every month since November.”

The baccarat tables will be open as of 12:01 a.m. Saturday, and the casino is opening a poker room mid-May “the quality of poker room Colorado has never seen before,” Farahi said. Close behind are keno and high-limit slots.

“The hotel will be full absolutely,” he said. “We have a database and we’ve been reaching people all over the area to let them know ... limits are going away – you don’t have to fly to Vegas anymore.”

Both casino reps said there will obviously be more cash on premises, and the corresponding security to go with it.

“We have a lot of experience with bigger limits and players from Nevada, and we’ll deploy those best practices in Colorado,” said Farahi.

Casino owners and officials predict the unlimited betting can turbocharge a recovery for not only the casinos, which have been strapped by pandemic-forced closures and crowd limits, but the towns themselves.

“There will be an increase of tax revenue ... this will be a real jump start, so the timing is good as far as that goes,” Spellman said.

'Mattress Mack:' I'll be back for another bet in Colorado Springs