Houston Astros fans sit in the clubhouse level of Coors Field as a heavy snow falls in the ninth inning of the team's baseball game against the Colorado Rockies on Wednesday, April 21, 2021, in Denver. The Rockies won 6-3. (AP Photo/David Zalubowski) 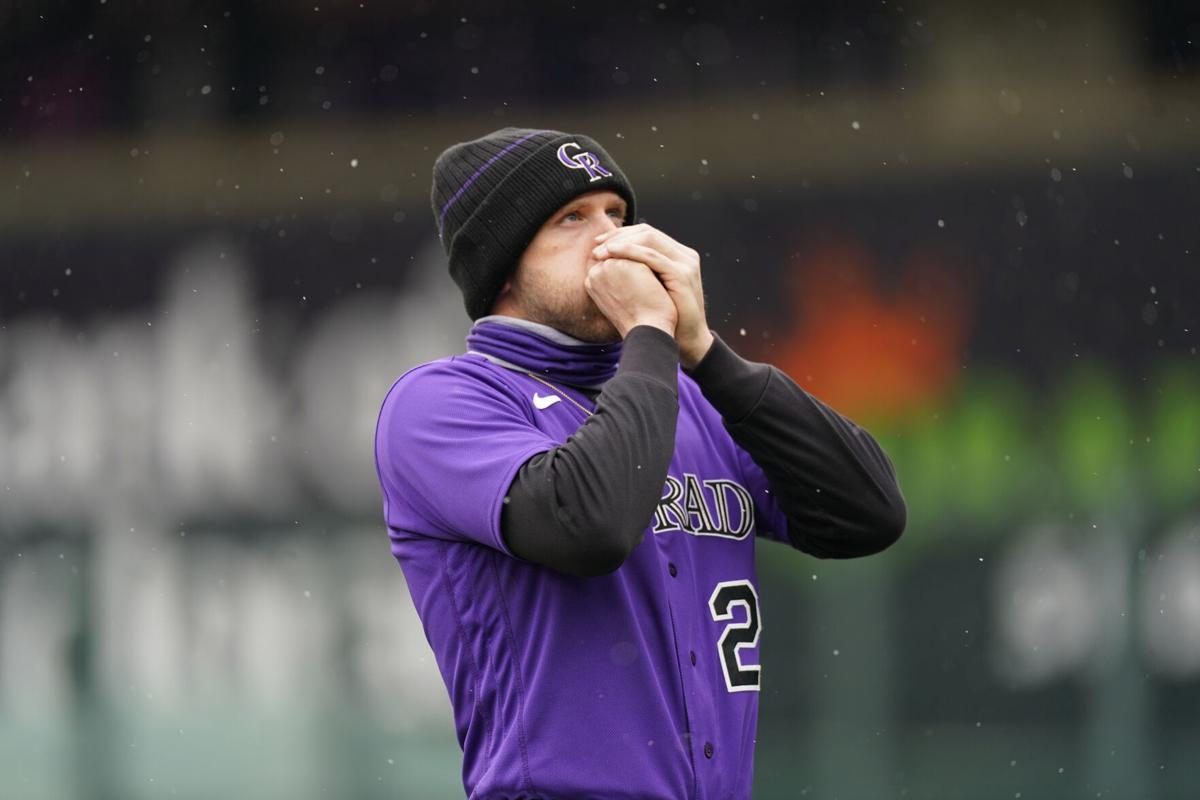 Colorado Rockies shortstop Trevor Story tries to keep warm as a light snow falls before a baseball game against the Houston Astros on Wednesday, April 21, 2021, in Denver. (AP Photo/David Zalubowski)

Houston Astros fans sit in the clubhouse level of Coors Field as a heavy snow falls in the ninth inning of the team's baseball game against the Colorado Rockies on Wednesday, April 21, 2021, in Denver. The Rockies won 6-3. (AP Photo/David Zalubowski)

Colorado Rockies shortstop Trevor Story tries to keep warm as a light snow falls before a baseball game against the Houston Astros on Wednesday, April 21, 2021, in Denver. (AP Photo/David Zalubowski)

DENVER — No matter how the next 144 games go, the 2021 Rockies will always have The Snow Game.

Picture this baseball scene, as 7,120 true diehards shivered under their Broncos blankets at Coors Field: Heavy, nickel-sized snowflakes dumping all over LoDo, the temperature gauge in the low 30s. In December-ish conditions, how were the Astros supposed to see an Austin Gomber curveball ... much less hit one hard?

“First time I’ve ever pitched in snow like that,” the Rockies’ left-hander said Wednesday after a 6-3 win.

This Rockies season will see the playoffs only on television. So now it’s all about the little things.

The little things like Gomber showing he’s more than the answer to the trivia question, “What did the Rockies get for Nolan Arenado?” No, the Rox did not get fair value in exchange for a Hall of Fame third baseman. Yes, they did get a talented, super-competitive starter to plug into their pitching rotation, now and in the future.

Gomber flummoxed the Astros and limited the cheaters to two hits and two runs over six innings, his third straight quality start. His curveball drops like a stone in a wishing well. Between innings, he wished for a space heater.

“It’s not something I’d ideally love to do every five days,” said Gomber, who grew up in, ahem, Winter Garden, Florida.

The little things like Yonathan Daza hitting his first home run in the major leagues — in the snow. The Venezuelan spent a decade mostly in the minor leagues. Grand Junction, Boise, Hartford, Albuquerque. Out of minor league options, this year is his one, big, final chance.

Boom! On a 2-2 pitch in the second inning, snow flurries clouding his view, Daza launched a 415-foot shot into the left-field bleachers. Now there’s a story to tell on the beach back home.

“My first time (playing in the snow),” Daza said.

The Rox are outmanned, and that says more about ownership and the front office than it says about the players themselves. And sweeping a two-game series from the Astros, in miserable conditions, said lots about the players. It said their care factor is high.

Anyone who’s stood on a frigid 16th tee box with double bogeys all over the scorecard could relate to the Rockies’ predicament: Is it time for the 19th hole yet? With a 4-12 record that stood as the worst in baseball, the Rockies could have checked the forecast and empty ballpark and checked out of a midweek series against an AL opponent. Instead, they said, “Let’s win two.”

Dom Nunez had two RBIs. Trevor Story had two RBIs and his usual, a diving defensive stop to save a hit. Ryan McMahon had a couple of hits. The ski masks and hidden hand warmers felt like a scene from the top of Jabberwocky at Winter Park. At 34 degrees, it was the coldest game in Astros history. Here in Colorado we call it April.

“It was an experience for sure,” Gomber said.

You might need a game program to recognize some of these Rockies. But they are playing for something, even if it’s not a pennant. They’re playing for a permanent job — their dream job.

“We have a number of guys who are trying to make their mark in the big leagues,” Bud Black said. “Charlie (Blackmon), Trevor, (CJ) Cron (are veterans). The rest of the group are trying to solidify themselves as major league players.”

Then there’s Austin Gomber. Count me in on this guy. While he arrived under unfortunate circumstances, the Rockies found one here. His pitch mix and delivery won’t remind too much of Rockies starter Kyle Freeland, but his competitive streak will. He struck out six, and five came on the bottomless curveball. He trusts that pitch now. As our ace Rockies writer Danielle Allentuck pointed out, Gomber threw a curve on 23.5 percent of his pitches.

The snow’s white. The ball’s white. Then it drops off the table? Good luck with that, fellas.

“Big fan of his curveball,” said Nunez, the catcher.

DENVER — Austin Gomber’s first outing at Coors Field on April 4 was one of the worst of his career. Manager Bud Black chalked it up to new tea…