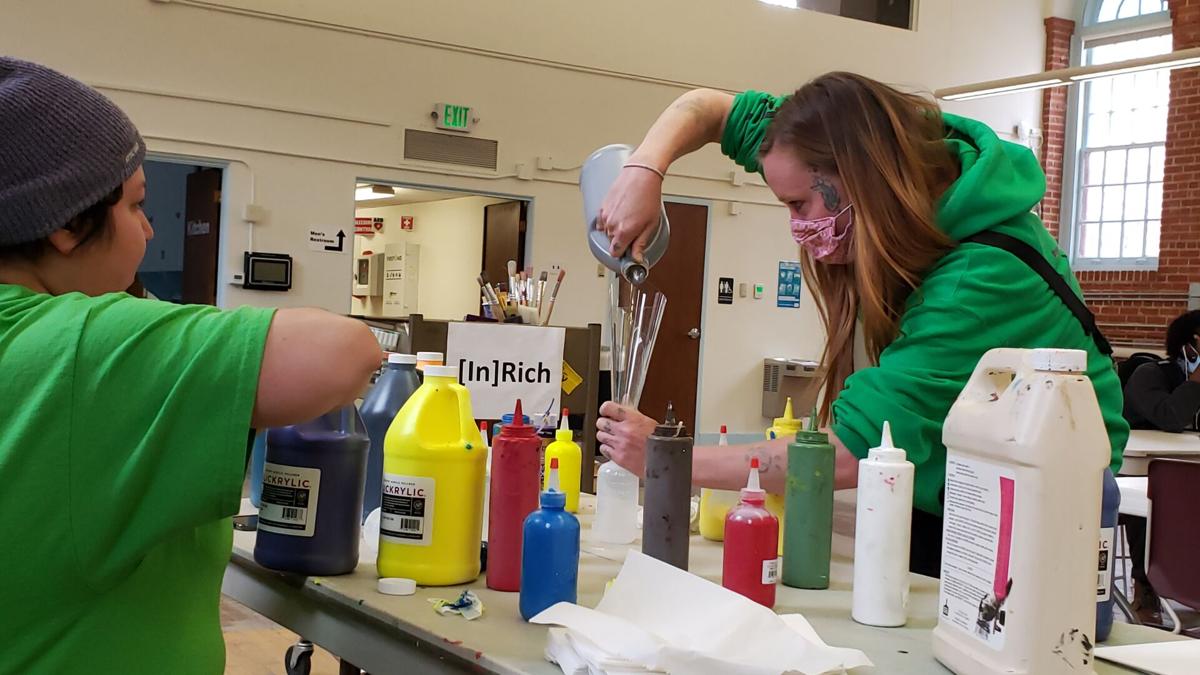 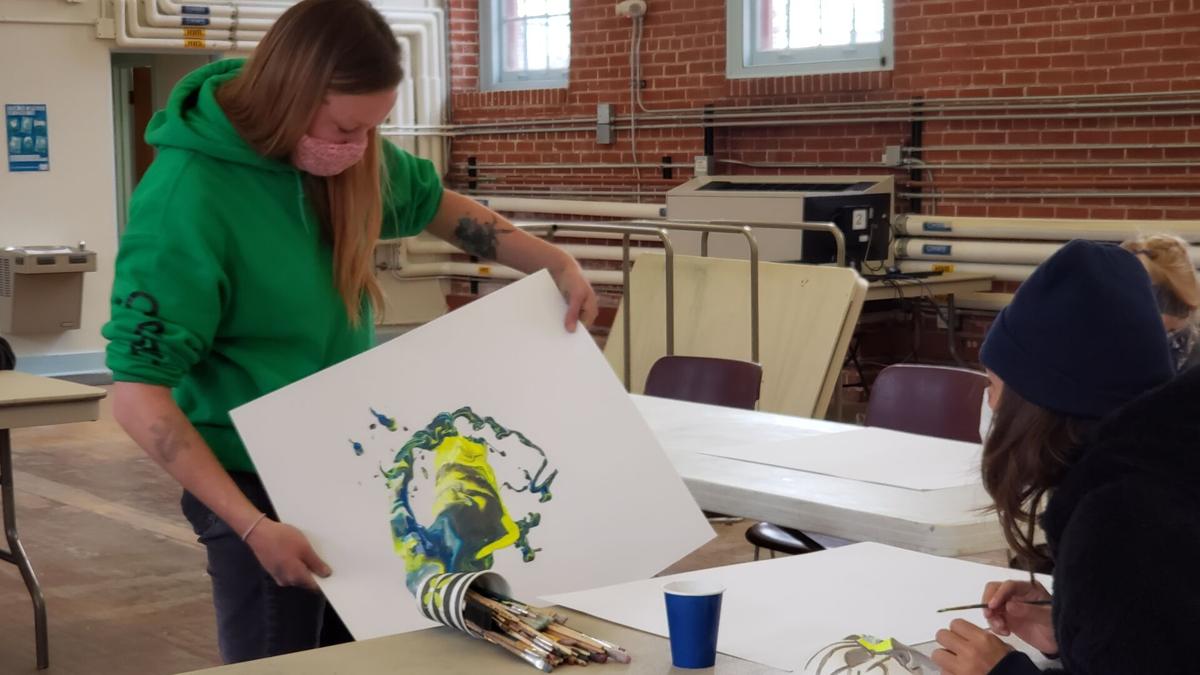 Soft, forgiving chalk pastels bring beauty to what can look like an ugly world.

Pieces of pale green, yellow, blue and pink chalk pastels beg to be picked up and put in motion.

As people enter the expansive Knights of Columbus Hall, which in the early 1900s hosted public bazaars and boxing matches, their eyes flicker to the supplies laid out.

Jansen Howard, street outreach program manager for Homeward Pikes Peak, asks guests to choose a color they connect with and scribble on the paper for 30 seconds. Working in pairs, they move to other tables and repeat the process. They then look for an image emerging, give it a title and come up with a story about it.

The ice-breaker exercise is a way for participants to meet others, express themselves and forget about their problems for a while, Howard said.

“It really brings the group together and takes the pressure off,” she said. “This population feels like they’re put in a box at all times — here they can be pretty open.”

She chose chalk pastels for the group activity because it’s a fluid substance that doesn’t require a lot of technical background to produce a pleasing result.

No artistic ability or skill is needed for Howard’s weekly art therapy program, which is for anyone living on the street, in shelters, with friends or finding their way out of homelessness.

Participants can spend up to three hours every Friday afternoon experimenting as they please with painting, drawing, mask-making and creating soft figures.

Howard, a graduate student studying art therapy, opened the program in the fall of 2019, closed it last year when COVID arrived, and restarted it last month, as a project of Homeward Pikes Peak and the Pikes Peak Library District.

Danielle Duran, 23, loves everything about the art studio.

Her favorite activities include the pastels and making a plush cat — which sits in her apartment that The Place, the region’s shelter for homeless teens, helped her get into.

“We can be free and not feel judged,” she said of the art studio.

The time Duran spends there has also been helpful in healing and becoming self-sufficient.

“I’m able to put my anger on the paper,” she said last Friday. " ... After you look back at your art, you feel proud of your piece and accomplished."

“Youth who are experiencing homelessness are still young people who crave all of the things other young people do — community engagement, enlisting their creativity, a chance to have a friend,” she said.

Howard knows how difficult living on the streets can be, having been homeless herself at one point.

In addition to providing a creative outlet, the (In)Rich studio — named with the thought of enriching the lives and being inclusive of those encountering tough times — gives respite to the homeless and helps them with basics such as obtaining identification and moving into housing.

“This goes hand-in-hand with my graduate studies of art-making as a mechanism of social change,” she said.

During the six divided months of operation, nearly 100 individuals have participated, Howard said.

“People see the benefits,” she said. “Art-making in general is therapeutic to address trauma, or whatever’s going on, and is a good way of digging deeper without feeling threatened.”

Howard often rounds up potential participants from parks, soup kitchens and chairs inside Penrose Library, next to the hall.

“There really isn’t anywhere for people to be downtown during the day, which has caused anger in the community and with business owners,” she said. “I wanted to develop a place where people could come and do something productive and benefit their lives.”

Howard carries an iPad to assist with needs such as getting a new identification card, signing up to be on a waiting list for transitional housing or enrolling for food stamps.

“If we got the regulars to form a cohesive community as social justice artists, public perception would shift from the camps,” she said.

The program is invaluable, says Dustin Booth, manager of the Knights of Columbus Hall.

“The attendees leave the Friday sessions energized and vibrant,” Booth said. “Too often, people in these situations are operating in survival mode and rarely get the opportunity to engage in creative pursuits.

“Creativity is an essential aspect of our humanity, and this program recognizes and nurtures this.”

Howard agrees. Producing art removes homeless people from the despair and hopelessness they constantly live in, she said, and for a few hours a week, gives them a chance to experience one of the world’s many splendors.

“You can’t create change if you can’t imagine it first, and this is a way of taking them out of their homeless identity that stops them from being able to create that change — by making something of value that allows them to be seen and heard.”