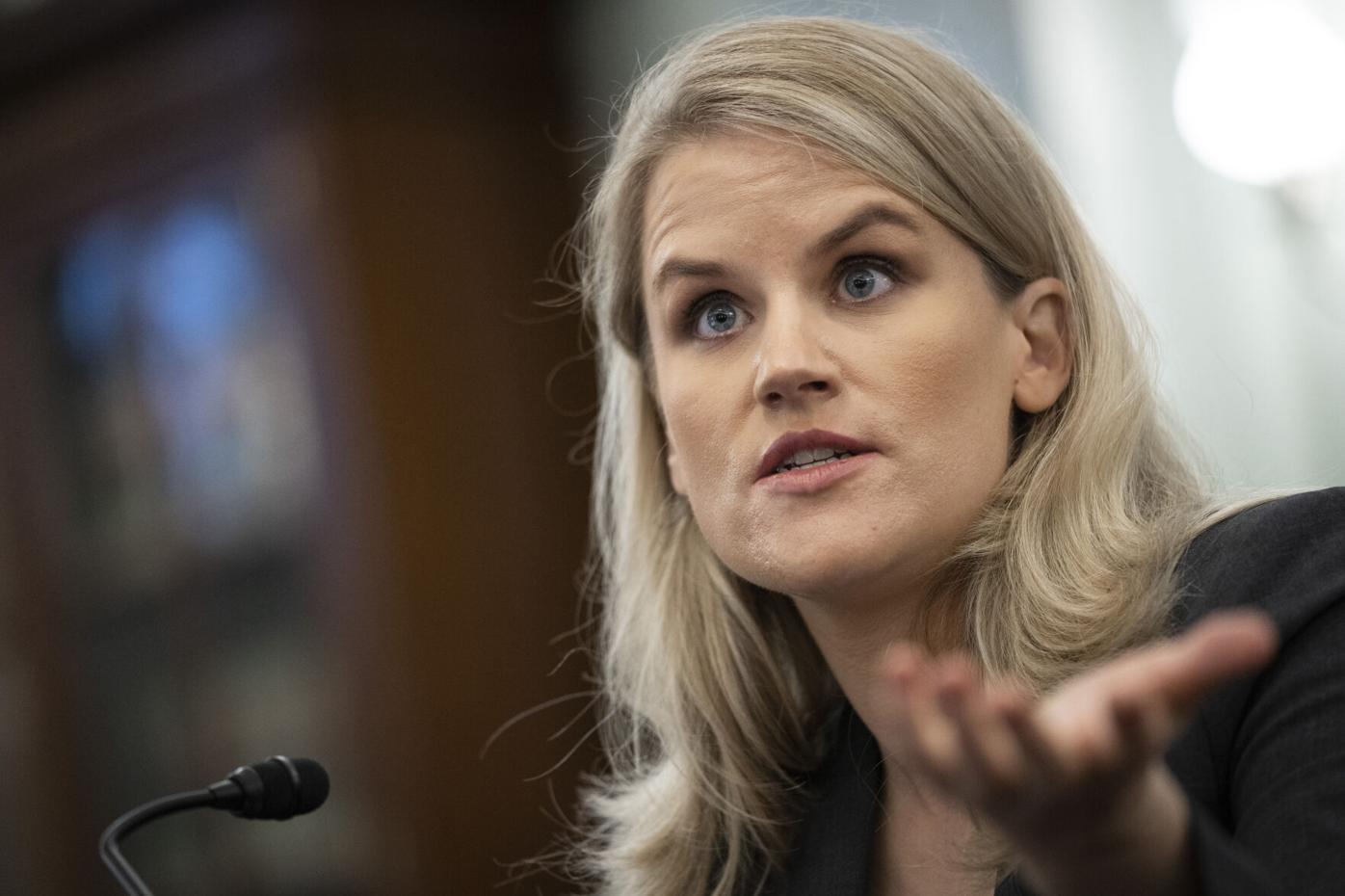 Former Facebook employee and whistleblower Frances Haugen testifies during a Senate Committee on Commerce, Science, and Transportation hearing on Capitol Hill on Tuesday, Oct. 5, 2021, in Washington. (Drew Angerer/Pool via AP)

Former Facebook employee and whistleblower Frances Haugen testifies during a Senate Committee on Commerce, Science, and Transportation hearing on Capitol Hill on Tuesday, Oct. 5, 2021, in Washington.

Former Facebook employee and whistleblower Frances Haugen testifies during a Senate Committee on Commerce, Science, and Transportation hearing on Capitol Hill on Tuesday, Oct. 5, 2021, in Washington. (Drew Angerer/Pool via AP)

Former Facebook employee and whistleblower Frances Haugen testifies during a Senate Committee on Commerce, Science, and Transportation hearing on Capitol Hill on Tuesday, Oct. 5, 2021, in Washington.

We learned this week from a former employee that Facebook has done extensive research on their own products, particularly Instagram, that shows the undeniable detrimental impact of social media on the mental health of children and young adults. Their research is the most persuasive I’ve seen on the direct relationship between the rise in social media and the decline in mental health.

The problem is, Facebook never shared that research, nor changed their products to lessen the harmful effects of them on teenagers and young adults.

But because of whistleblower Frances Haugen, a data scientist with a degree in computer engineering and a Harvard master’s degree in business, we now know definitively this troubling link exists.

Haugen, who testified before Congress this week about what goes on inside Facebook, took thousands of documents with her when she left the company. She has leaked one Facebook study that shows 13% of British users and 6% of American users say their suicidal thoughts became more frequent after regularly using Instagram.

Another leaked study found 17% of teen girls say their eating disorders got worse after using Instagram.

“Thirty-two percent of teen girls said that when they felt bad about their bodies, Instagram made them feel worse,” the researchers said in a March 2020 slide presentation posted to Facebook’s internal message board, which was first reported on by the Wall Street Journal in a blistering series, The Facebook Files.

A clinical psychologist who specializes in children and young adults reviewed the testimony and research for me.

”This documentation confirms what we all assumed: When teenagers go into a deluge of comparative analysis with their bodies their mental health is significantly impacted,” she said.

In public, Facebook has said quite the opposite — that the app has positive effects on teens.

“The research that we’ve seen is that using social apps to connect with other people can have positive mental-health benefits,” CEO Mark Zuckerberg said at a congressional hearing in March 2021.

But my psychologist friend explains that social media is a very different experience for children and adults.

“Supporters of social media will suggest that the negative impact is counterbalanced by the connective properties that help us stay in touch with people we love, particularly during the pandemic when we were so isolated,” she said. ”But that is an adult’s interpretation of how social media is used. A teenager and a pre-teenager uses social media as a private way to explore expectations they feel society has for them and it begins to cultivate the expectations they have for themselves.”

“If a barrage of superficial images and, at times, misleading narratives about life, looks and perfection is hard on us adults, imagine having (virtually!) no alternative reality than social media or depth of experience with which to balance fantasy with reality,” my psychologist friend told me.

Heidi Baskfield, vice president of Population, Health and Advocacy for Children’s Hospital Colorado, once showed me a chilling graph. Since the day that the Apple iPhone was introduced in 2007, the rates of mental illness in children have skyrocketed. The chart she drew for me showed that the growth of social media directly parallels the rise in suicide and mental health problems among teens and young adults.

Witness these sobering stats from research published by the American Psychological Association:

The rate of adolescents reporting symptoms of major depression in a given year increased by 52% from 2005 to 2017.

There was also a 71 percent increase in young adults experiencing serious psychological distress from 2008 to 2017.

The rate of young adults with suicidal thoughts or other suicide-related outcomes increased 47 percent during that same time period.

So what do we do?

Well, since this is Facebook’s research, I think its only fair we listen to what a former Facebook employee recommends.

Haugen was extraordinarily blunt in telling lawmakers that Facebook needs to be regulated by Congress because they will never regulate themselves.

“I believe Facebook’s products harm children," she testified. "The company’s leadership knows how to make Facebook and Instagram safer, but won’t make the necessary changes because they have put their astronomical profits before people. Congressional action is needed.”

Colorado Attorney General Phil Weiser had some ideas Thursday on what that congressional action should look like.

Truck of the future? This all-electric pickup might just save the world | Vince Bzdek

In a letter sent to the chair and ranking member of the subcommittee conducting the Facebook hearings, Weiser and Pennsylvania AG Josh Shapiro presented a trio of recommendations:

Haugen went even further and suggested that we immediately increase the minimum age for any person using social media to 17 years old from 13 years old.

It all makes me wish for a social media app that sends positive cues and messages to our kids every day rather than negative ones. Oh for an app that issues Ted Lasso-like daily reinforcements such as “You know what, you’re perfect just the way you are.”

This week‘s testimony and the Wall Street Journal’s investigative reporting have posed tough questions not just to Congress and Facebook, but probably to us parents of teens and young adults as well.

No matter what Congress does, social media isn't going anywhere. This genie is out of the bottle.

Given that, Haugen's challenge to all of us parents is pretty black and white: What’s more important, your kids’ screen time and access to social media, or their mental well-being, and ultimately, their lives?

In search of the new Aspen (and they're out there!) | Vince Bzdek

I remember some 40 years ago, I visited Aspen to write a story about the first McDonald’s coming to town. Locals at the time were apoplectic, …