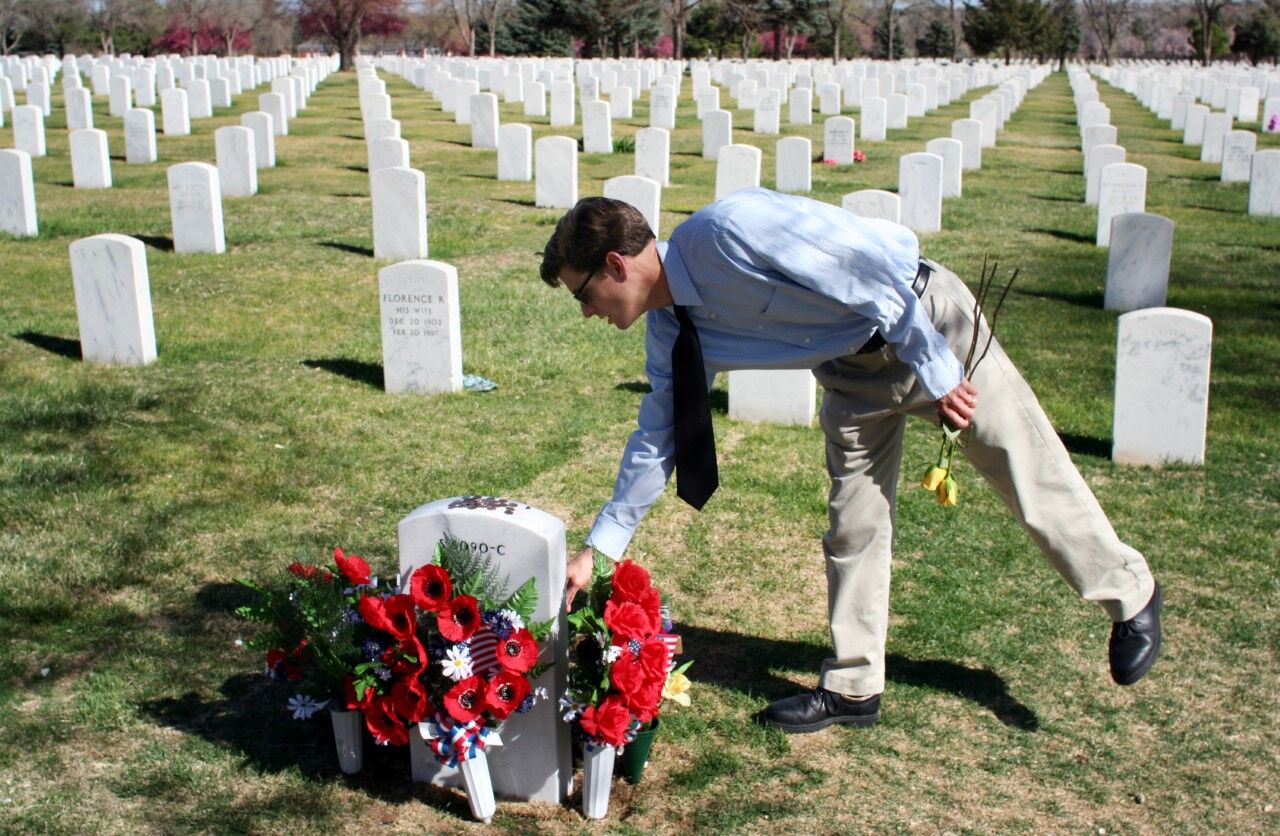 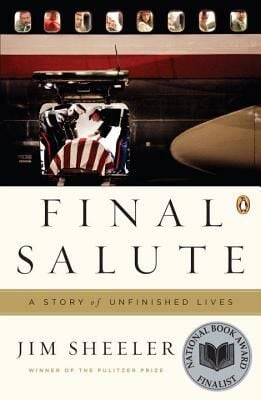 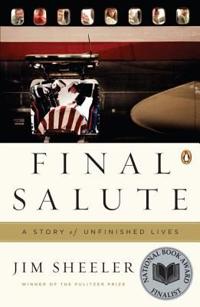 Jim Sheeler and Todd Heisler’s powerful story of Colorado Marines killed in the Iraq war won Pulitzer Prizes for feature writing and feature photography, respectively. Published by the Rocky Mountain News, the story later was turned into a book which was a finalist for the National Book Award. Sheeler died last week at his home near Cleveland. 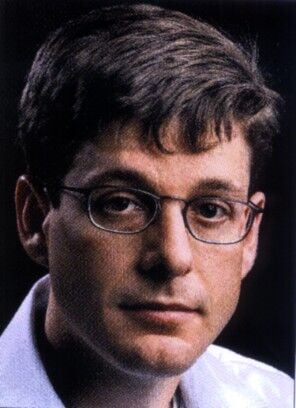 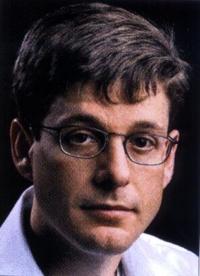 Jim Sheeler, then of the Rocky Mountain News, won the 2006 Pulitzer Prize for feature writing.

Jim Sheeler and Todd Heisler’s powerful story of Colorado Marines killed in the Iraq war won Pulitzer Prizes for feature writing and feature photography, respectively. Published by the Rocky Mountain News, the story later was turned into a book which was a finalist for the National Book Award. Sheeler died last week at his home near Cleveland.

Jim Sheeler, then of the Rocky Mountain News, won the 2006 Pulitzer Prize for feature writing.

His towering talent as a storyteller never overshadowed his humility, his compassion and generosity toward others, his innate sense of decency and concern that allowed complete strangers to share with him the intimate details of their lives.

He was a meticulous and painstaking craftsman whose artful constructs achieved the remarkable: Readers were delivered as present, first-hand observers into the narrative being detailed. One did not read a Jim Sheeler story so much as experience it in the living moment.

Those of us who loved Jim — and there are legions — were shocked, saddened and, fair to say, devastated by his passing. Jim would not approve. He would say you’re telling me, not showing me.

“Jim always wanted to be there, to see for himself,” said Todd Heisler, the Pulitzer Prize winning photographer and Jim’s partner on many stories for the Rocky Mountain News. “And he had great eyes. I think that’s why many photographers loved working with him.”

Part of Jim's power derived from understanding the emotional center of his story and being able to deliver it like a rabbit punch. In my time as his editor, I would be reading along, 400 words in, happy as a clam, and suddenly find tears streaming down my face.

Jim and Todd won their Pulitzers in 2006 for their work on “Final Salute,” which, to quote Jim’s award citation, was “for his poignant story on a Marine major who helps the families of comrades killed in Iraq cope with their loss and honor their sacrifice.” And to quote Todd’s, “for his haunting, behind-the-scenes look at funerals for Colorado Marines who return from Iraq in caskets.”

It is relatively rare for one story to win two Pulitzers, but that is what Jim and Todd accomplished. Our goal at the Rocky Mountain News, led by our editor, John Temple, was to tell the story of the Iraq war as best we could on the home front. And that meant increasingly, as the war mounted and took its toll, covering funerals at Denver’s Fort Logan National Cemetery, as well as at other locales in the Rocky Mountain West.

Through those stories Jim met Major Steve Beck, the U.S. Marines casualty notification officer for the region, and that was the inception of “Final Salute,” a year-long enterprise to follow Major Beck and his Marines as they delivered the dread knock on the door to inform military families that their loved one had been killed in action. Major Beck, a Marine of steel with a poet's soul, was at first dubious.

"It's going to take you understanding what we do, all of our traditions," he said he told Jim and Todd early on. "You're going to walk this crucible with us, it's going to  be painful, but that's the only way you're going to be able to do this story."

Jim and Todd learned that they each had won the Pulitzer the night before the formal announcement. On the morning of the announcements, they went to Fort Logan National Cemetery to pay respects to some of the fallen service members they'd reported on, Todd said by telephone on Thursday.
"It’s essentially where our project began. He bought flowers at a supermarket on the way and placed one at each headstone. It was his way of staying grounded, I think. He always wanted the attention to be on the people he wrote about."
In 2008, after “Final Salute” had become a book, by then Lt. Col. Beck described the mission on NPR’s “Fresh Air” with Terry Gross. Jim was there on the show, too.

“What you must do is convey to them that their loved one has fallen, their loved one has died, and that you’re there, that you have empathy for their pain and you are there to care for them and to help guide them through what will prove to be some of the most difficult days of their lives,” Lt. Col. Beck said. "And so you go with an empathetic heart, but at the same standing as strong as you can so that you can be their oak…”

What Jim and Todd achieved in “Final Salute” was the telling of that mission, and the stories of remarkable families who’d sacrificed all. It was a searing, beautiful, life-affirming compendium of words and photographs about loss.

In his Facebook tribute to Jim after his death, Steve Beck said, “Today Jim is with our heroes and I know they call him brother because of the delicate care and respect he showed for their families and the memories they left behind. One of his many legacies is that the shared voice he was able to give to a few, echoed with great resonance for thousands of Gold Star families across this nation and it brought their collective pain into the light for a nation that could then act to appropriately embrace them … ”

Before “Final Salute,” and long before he had moved on from daily newspapers in Colorado to become a much-lauded and well-loved professor of journalism at Case Western University in Ohio, Jim wrote wonderful obituaries for the Boulder Camera, for the Denver Post, and finally for our readers at the Rocky Mountain News. In Jim’s telling, these were not stories of people who had died. They were stories of people who had lived.

Some of those stories were collected in his book “Obit: Inspiring Stories of Ordinary People who Led Extraordinary Lives.”

When the book came out, Jim did a reading at the Tattered Cover on Colfax. There was a nice crowd there, including his Mom and Dad up from Texas, and several of his colleagues from the Rocky and other friends.

Jim shared the extraordinary privilege he felt in being invited to sit with grieving families as they shared their memories. He had the intuitive sense that they would say something true and utterly revealing about their loved one, and that he would understand it when he heard it. “I would wait for that one true thing,” he said, “no matter how long it took.”

Todd, now a photographer with The New York Times, described that quality in talking about their work together: “He was such an incredible listener and observer. He always knew the right questions to ask. But also knew when to just watch. He’d always stay longer than anyone else. He’d stay until they’d ask him to leave. Which to my recollection never happened.”

Instead, I joked to Jim once, the families would finally spill the beans about their loved ones so that Jim could leave and they could go to bed.

Jim and Todd spent long days and nights together gathering the stories for "Final Salute." And Todd spoke more about that experience.

“We spent so much time together, often around so much unimaginable grief that we developed a sense when the other needed a break, to step back. And so much of this relationship was fortified by long drives, sharing hotels, or sleeping in a van on a cold night in South Dakota. You get to know a lot about what someone is made of … I learned about what a dedicated father he was. He cherished his son’s voice messages when he was on the road. It sustained him. (Jim is survived by his wife, Annick, and their son, James.) And it informed his work on such a deep level."

I started this appreciation of Jim and his work by noting his selflessness. But that doesn’t mean he wasn’t proud of what he did. He had his own well-informed ideas and standards. I think it’s possible I raised his ire a time or two with an editing suggestion with which he didn’t agree.

He loved his work, and I think there were times when it probably tormented him, writing as he often did about the jagged boundaries of human love, loss and grief. Steve Beck said by phone Thursday, "There is zero doubt that he carried this pain with him, that he was tormented. We all are. Jim and Todd were the right people at the right time to tell a hard story."

I do believe that Jim's kindness, his empathy and concern brought comfort to the many his words touched.

As Steve Beck put it in his tribute, “The world is dimmer without his pen because it was light by which he helped others see humanity more clearly.”

• Jim Trotter is an associate editor at The Gazette. He worked with Jim Sheeler at the Rocky Mountain News.

NEW YORK • Jim Sheeler, a former Rocky Mountain News journalist who won a Pulitzer Prize for his extensive and compassionate reporting on the …