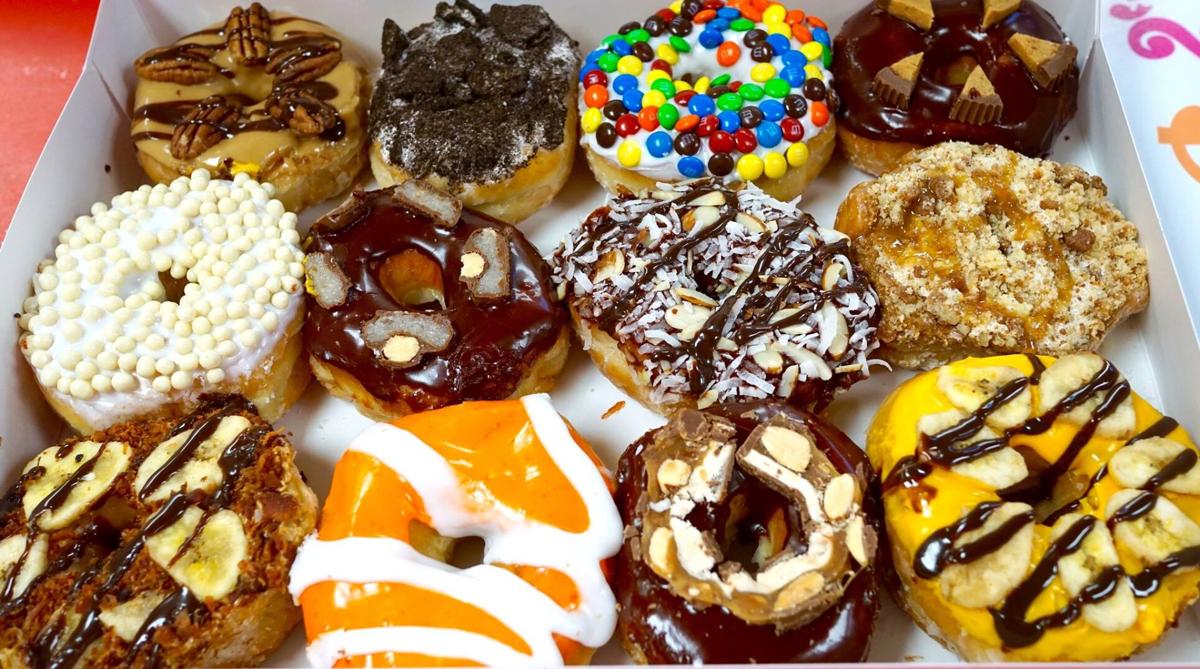 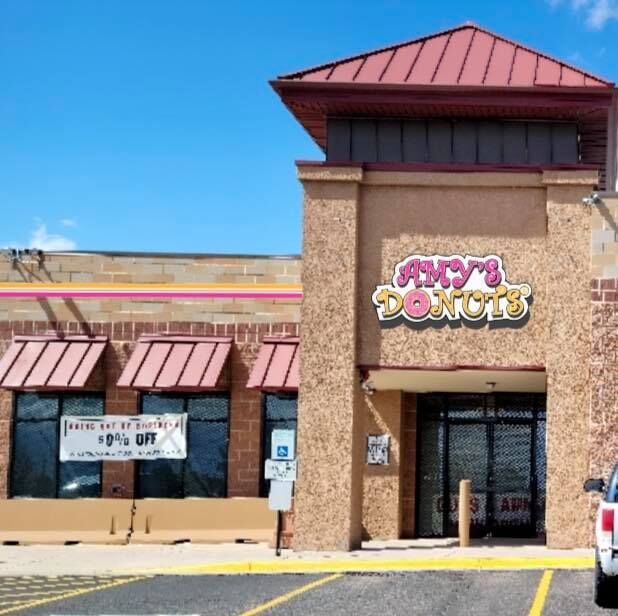 A photoshopped logo has been affixed to a building northeast of Powers Boulevard and North Carefree Circle in northern Colorado Springs, where Amy’s Donuts plans to open its second local store in January. Amy’s will continue to operate its original location at 2704 E. Fountain Blvd. on the city’s south side. 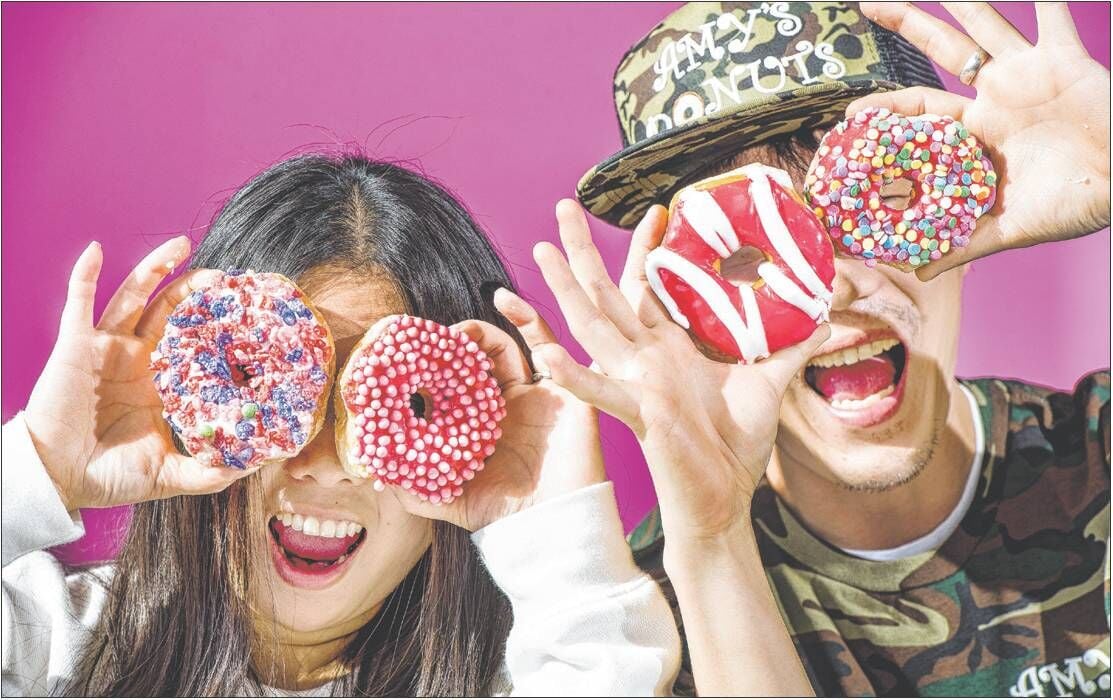 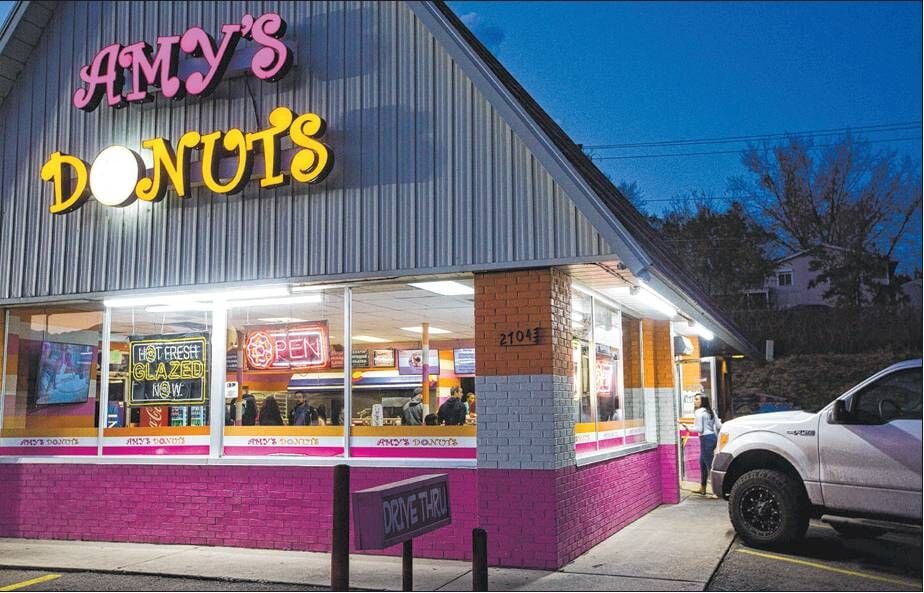 Amy’s Donuts opened in December 2013 at 2704 E. Fountain Blvd. on Colorado Springs’ south side; one of its attractions is long hours for its more than 100 varieties of doughnuts — from 5 a.m. to midnight every day of the year. Amy’s will add a second location in January northeast of Powers Boulevard and North Carefree Circle on the city’s north side.

Amy’s Donuts, whose more than 100 varieties range from the traditional to the exotic, will add a second location next year in fast-growing northern Colorado Springs while it keeps its original store on the city’s south side.

Amy’s will take over a 2,300-square-foot space that had been occupied by Colorado Springs Guns & Ammo; an opening date has been targeted for Jan. 1, Kim said.

He and his wife, Amy, launched the namesake business in December 2013 at 2704 E. Fountain Blvd., near South Circle Drive. At the time, Chin had experience working with his parents in the doughnut business, while Amy had a background as an electrical engineer.

Over the years, their Fountain Boulevard store became popular with locals and tourists for its wide variety of doughnuts served nearly round the clock — from 5 a.m. to midnight every day of the year.

Simpler fare includes raised, cake, frosted and filled doughnuts, with chocolate, glazed icing, vanilla and blueberry flavorings, among others. Cinnamon twists and rolls, apple fritters and pigs in a blanket — sausages in a croissant — also are on the menu.

The Kims have looked to expand to northern Colorado Springs for some time, Chin said.

Many longtime customers urged them on social media to open on the north side, he said.

The city has grown north and northeast for decades, and hundreds of restaurants, retailers, big-box stores, groceries and service-oriented businesses have set up shop along or near Powers Boulevard, one of the city’s busiest retail corridors.

“The north side, obviously, with everything growing so fast, we don’t want to miss out,” Kim said. “We don’t want to be left with no locations open, with all these new companies coming in. Everything’s not a guarantee, we understand that. But with our brand recognition and with our long-lasting customers, we hope the north side will be just as successful.”

The new Powers and North Carefree store won’t have a drive-thru, unlike the Fountain Boulevard location, Kim said.

That’s a concern, Kim said. But based on the owners’ experience, customers will come out for quality doughnuts in a safe environment and with reliable employees, he said.

Still, the north-side location will have an expanded on-site kitchen and slightly more space to accommodate a fourth display case, which will allow it to carry a larger variety of doughnuts, he said.

Since launching their original Fountain Boulevard location, the Kims have sought to grow their business and continue to have goals of expanding the brand and franchising it nationwide.

In addition to the Fountain Boulevard store in the Springs, they now have locations in Albuquerque, N.M.; Columbus, Ohio; Denton, Texas; and Tucson, Ariz.

A sixth location will open Oct. 1 in Lewisville, Texas. The northern Springs location would be the seventh, and the Kims envision a further Texas expansion in Austin, Houston and San Antonio, Chin said.

His younger brother, Jin, a former lawyer in Texas, has joined the ownership group. He owns the Albuquerque, Columbus and Denton stores; Amy and Chin own the other locations.

Not every location has been a hit, however. The Kims opened Amy’s Donuts in Pueblo in late 2014, but closed it less than two years later. In May, they shuttered a Spokane, Wash., location that had opened in 2018.

Hurtin' for a donut? Missouri-based Hurts Donut to open in northeast Colorado Springs

“We did everything we know how to do. We just couldn’t make it there, we couldn’t make it in that community. No excuses,” Chin said of the Spokane location. “We made the sound business decision to lock up and close the doors after 2½ years. We learned from our lesson and we’re moving on as we continually try to keep going forward.”

The north-side Springs store will face plenty of competition.

Dunkin’, Hurts Donuts and Arnold’s Coffee and Donuts are among local, regional and national brands along or near the Powers corridor. A Krispy Kreme Doughnuts franchisee plans to open at Powers and South Carefree Circle, while grocery and convenience stores also sell doughnuts.

Chin, however, believes the Amy’s brand will travel successfully to the city’s north side.

Customers like the opportunity to buy doughnuts at all hours of the day, and most of their competitors close in the afternoon and evening when Amy’s remains open, Chin said.

“Our long hours make us special and having the doughnuts throughout the day makes us special,” he said.

“Our model,” he added, “is to make the doughnuts as soft and fluffy as possible, make them throughout the day, don’t run out and keep the cases full.”