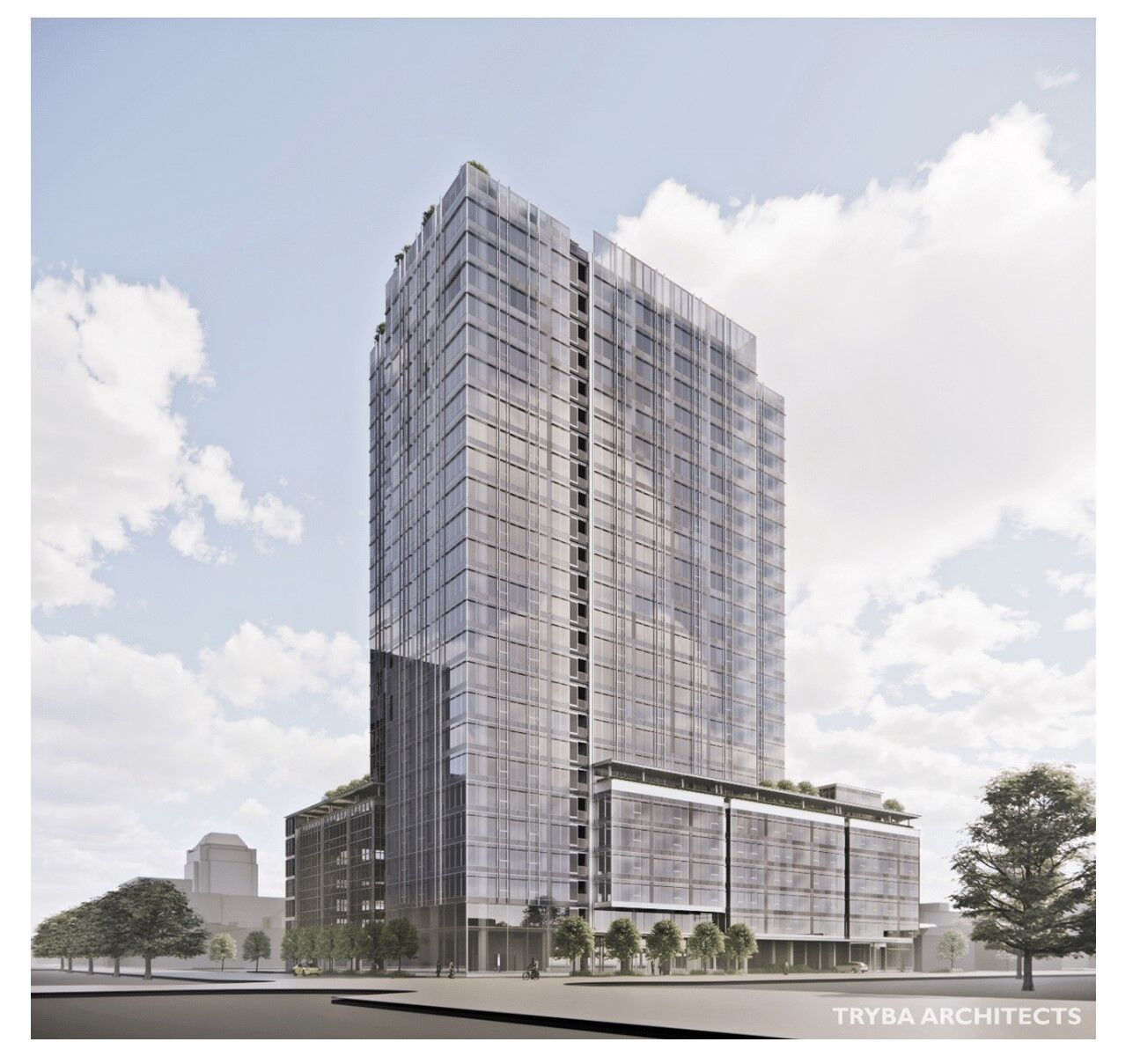 A 25-story residential tower — Colorado Springs’ tallest building — would be part of a downtown mixed-use project that would include an 11-story office tower. The project has been proposed by the Springs-based O’Neil Group. 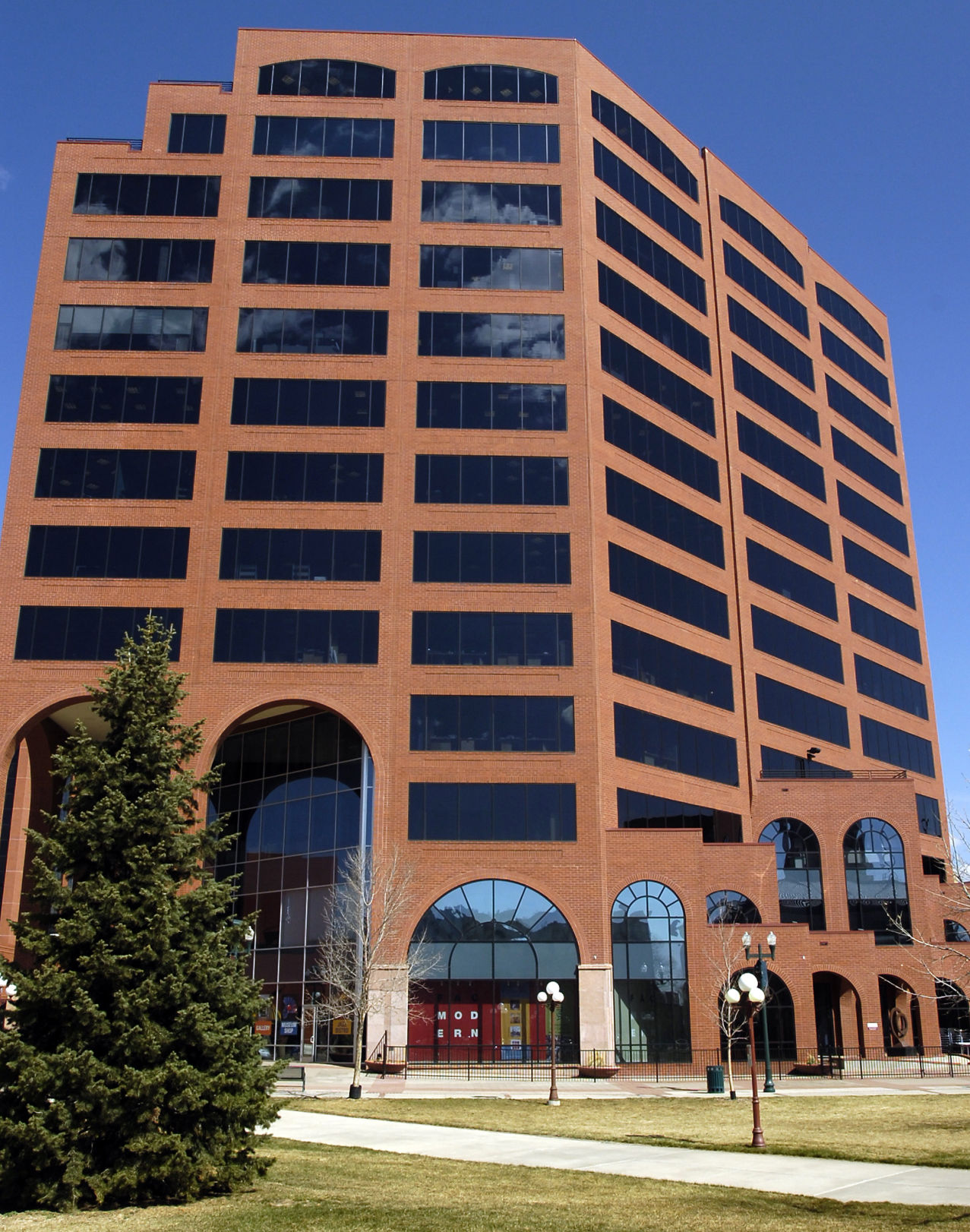 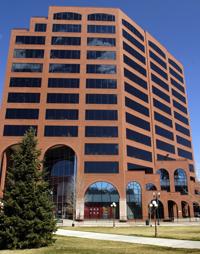 Plaza of the Rockies south tower in 2007.

A 25-story residential tower that would be the tallest building in Colorado Springs history would be constructed downtown along with an 11-story office structure as part of a proposed $270.1 million mixed-use project that would dramatically change the city's skyline.

"The proposed project represents a historic step in the evolution of Colorado Springs' urban core," according to a plan submitted to the city’s Urban Renewal Authority by The O'Neil Group, the Springs-based company that developed the Catalyst Campus for Technology and Innovation on downtown's east edge and formerly owned a local defense contractor.

The project would be developed immediately south of Centennial Hall and the Pikes Peak Center for the Performing Arts, on a block bounded by Sahwatch and Costilla streets and Cascade and Vermijo avenues.

The residential tower, which would include a five-level, 405-space parking garage, would go up on the block's southwest corner; the office building, with its own five-level, 250-space garage, would be constructed on the northeast corner.

The sites currently are occupied by a surface parking lot formerly used by 4th Judicial District jurors, two houses that have been converted to offices and an aging, vacant warehouse.

The residential tower's 25 stories would eclipse the height of the Wells Fargo Bank Tower that opened in 1990 at Cascade and Colorado avenues. The Wells Fargo building has 15 stories of offices and a 16th-floor penthouse that houses building equipment.

As part of city government’s form-based code, created several years ago to regulate downtown development with a goal of achieving a more urban look and feel, there are no height restrictions for buildings in the area of The O’Neil Group proposal.

"After years of planning and significant public investment in infrastructure and streetscape improvements along Vermijo Avenue, the proposed project represents the first new private development along what the city has deemed a signature street in the heart of downtown," The O'Neil Group proposal says.

2 downtown Colorado Springs houses for free? Yes, with a catch

"To fulfill the city’s vision of establishing Vermijo Avenue as a destination corridor, this type of private investment in high quality complementary land use is critical to create vibrancy and commercial activity where there is currently a proliferation of surface parking lots and non-engaging civic buildings such as Centennial Hall and the County Judicial complex."

A study prepared for The O'Neil Group by economist Tatiana Bailey, director of the University of Colorado at Colorado Springs Economic Forum, estimates the project will generate a total economic impact of $491 million over its first seven years, which includes construction-related spending, the buildings' operation and creation of 3,760 jobs.

The O’Neil Group project would continue a surge of construction and redevelopment in downtown Colorado Springs that includes last year’s opening of the U.S. Olympic & Paralympic Museum, this year’s debut of the Weidner Field multiuse stadium and Robson Arena at Colorado College, a half-dozen hotels, and hundreds of apartments that are open or in various stages of planning.

Susan Edmondson, president and CEO of the Downtown Partnership advocacy group, said there’s still a strong demand for downtown housing that The O’Neil Group project would help fill. While many people will focus on the residential tower’s 25 stories, its 316 units would be comparable to projects proposed or underway by other developers.

At the same time, the availability of downtown office space has been tight, Edmondson said. The 13-story Plaza of the Rockies South Tower, which opened in 2001, was the last high-rise office building to be constructed downtown.

Through its Catalyst Campus office park and other downtown assets, which include the building at 6 N. Tejon St. occupied by The Gazette, The O’Neil Group and founder and CEO Kevin O’Neil have worked to bring jobs to the area, Edmondson said.

“When people compare downtown to perhaps another era, that’s often been an era of a lot of vacant spaces and empty lots, and I would say that’s never been healthy for a downtown,” she said. “This is a much healthier direction for us to be in, to have more jobs and more people living downtown.”

Kevin O’Neil said Monday he wants to develop the buildings to attract companies that will bring “high-quality, high-paying jobs” in engineering and other technical occupations to downtown.

“A strong downtown is the definition of a strong community," he said. "This kind of product isn’t available now in Colorado Springs. We need a great environment to attract young adults and the quality employees we need.”

Company officials had discussed downtown apartments for the past few years, but didn’t have concrete plans until El Paso County put its juror parking lot on the market last fall, O'Neil said.

A partnership controlled by the company bought the lot in December for $4.25 million and added property along Vermijo Avenue this year for $3 million. The Vermijo property includes two houses The O’Neil Group is trying to give away rather than demolish, though recipients must pay to move the houses by Jan. 22 to make way for the 25-story tower.

Talk of The O'Neil Group's plan for a high-rise residential tower has circulated for months among city officials and the area's commercial real estate community.

The company now wants to make use of an urban renewal designation, and financial incentives that come with it, as it moves forward on its project.

As a first step, it's submitted details of the project to the Colorado Springs Urban Renewal Authority, which meets Wednesday.

The site of the proposed 11-story office tower lies within an urban renewal district created in 2018 that includes the U.S. Olympic & Paralympic Museum and nearby property being developed by Nor’wood Development Group, one of the Springs' biggest real estate companies.

The residential tower site lies outside of that district and in a separate, older urban renewal area created in 2001, which covers remaining portions of southwest downtown.

As proposed, The O’Neil Group wants to remove the residential tower site from the southwest downtown urban renewal district and create a new stand-alone redevelopment area.

Designating the residential tower as its own urban renewal site — which would require approval by the Colorado Springs City Council — would qualify the project for tax-increment financing, commonly known as TIF.

Increased property and sales tax revenues generated by the residential tower would be set aside to help pay for public upgrades at the site — a financial incentive for the developer to transform a blighted area.

In an urban renewal area, bonds typically are issued to pay the upfront costs of onsite public improvements, and then are paid off over 25 years by use of the increased tax revenues generated by the new development.

But the clock has been ticking for 20 years on use of TIF revenues generated within the southwest downtown urban renewal district.

By removing the residential tower from that existing district, and creating a new redevelopment area, The O’Neil Group would have a fresh 25 years over which to make use of TIF revenues for that portion of its mixed-use project.

The O’Neil Group proposal identified $43 million worth of public upgrades that the company says would qualify to be financed with TIF revenues, including parking, demolition, façade, elevator and sprinkler costs. TIF reimbursements to support the residential tower’s improvements still must be determined.

Use of the TIF revenue will be crucial for the residential tower, according to The O’Neil Group. The company’s proposal says "more than $34 million in total equity from the developer and other investors has been raised to date."

But without the new urban renewal designation and TIF funding for the residential tower, the project's rate of return for investors would drop and "jeopardize private financing from equity partners," the company's proposal says.

"The mixed-use nature of this project embodies the live, work, play dynamic that is critical to downtown vibrancy and promoted by the mission of the (Urban Renewal Authority)," according to The O'Neil Group proposal. "The project will contribute to downtown employment growth by attracting talent to the residential component and attracting employers to the office component.

"An unfortunate reality of the downtown office market today is that it is nearly impossible to find 10,000 square feet or more of contiguous class-A space," the proposal adds. "This project will help downtown finally overcome that hurdle to attracting new businesses and jobs to the urban core. Coupling the office development with an iconic residential tower further positions the project as a prestigious destination for business and talent."

Other details of The O'Neil Group plan include:

• Nearly 11,600 square feet of retail space would be developed on the residential tower's first floor.

• Construction of the residential tower is estimated to begin in the summer and fall of 2022, with completion in July 2024.

“The design will incorporate technology-enabled winter gardens that will provide tenants open air conference rooms that can be used year-round, providing an amenity that does not currently exist at any other office property downtown," according to The O’Neil Group.

"The property will also include a 26,343-square-foot outdoor deck and event space along with several private terraces for tenants."

• The office building's core and shell would be completed by September 2023. Further construction would continue after that time as tenants lease space and complete their offices.

The Gazette's Wayne Heilman contributed to this story.