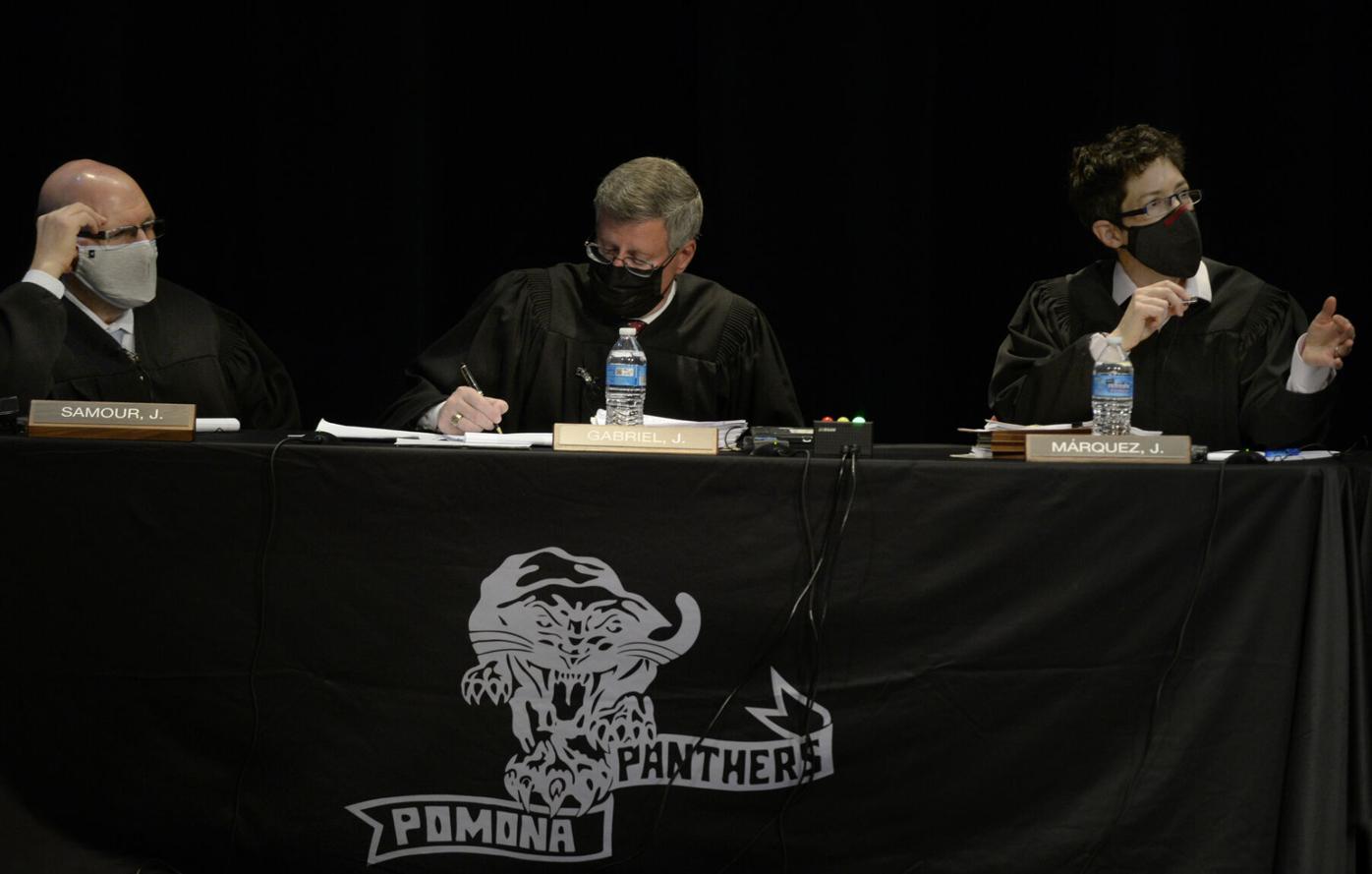 ARVADA, CO - OCTOBER 26: The Colorado Supreme Court, including left to right, Justices Carlos A. Samour Jr., Richard L. Gabriel and Monica M. Márquez, hear two cases at Pomona High School before an audience of students on Oct. 26, 2021 in Arvada, Colo. The visit to the high school was part of the Colorado judicial branch’s Courts in the Community outreach program. (Photo By Kathryn Scott) 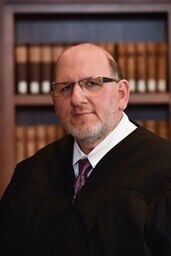 The basement of a Colorado Springs apartment building was covered under the state law that permits deadly force in defense of a home, the Colorado Supreme Court ruled on Monday.

The decision upholds a lower court's determination that Patrick Rau was able to claim immunity from prosecution for shooting and killing Donald Russell in 2017. While a 1985 law, nicknamed the "Make My Day" statute, authorizes occupants of dwellings to use physical — even deadly — force against unlawful intruders, it was unclear whether the common areas of multifamily buildings qualified as a "dwelling."

Justice Carlos A. Samour Jr., writing for the court, indicated simultaneously that the law did cover Rau's basement, but also that the court was not drawing a line on immunity in all types of dwellings where residents share space with each other.

"This opinion should not be understood as establishing that all common areas in shared living arrangements come within the scope of the term 'dwelling' in the force-against-intruders statute," he wrote.

The Supreme Court's decision in Rau's case also overruled a prior Court of Appeals holding from 1992. In that matter, People v. Cushinberry, the appeals court issued a brief, seven-paragraph ruling determining that common areas of apartment buildings were not part of a dwelling. Samour said the Cushinberry opinion did not persuade the Supreme Court because it lacked any detailed analysis of the law.

Timothy Bussey, the lawyer representing Rau, believed the court's move wiped away any presumption that immunity does not apply to people who use deadly force in congregate areas.

"What I believe that they're essentially saying is that courts need to establish the definition of dwelling on a case-by-case basis," he said.

Rau and his girlfriend lived in a home on the 200 block of North Wahsatch Avenue that the owner had converted into seven units. The basement contained a furnace, water heaters, plumbing and other rooms that were not in use.

When his girlfriend reported an intruder in the basement, Rau encountered a sleeping Russell and told him to leave. According to Rau, Russell began shouting and throwing objects. After Rau repeated that he would use force unless Russell left, Rau finally counted to five and shot Russell with his gun.

Under the Make My Day law, formally known as the Home Protection Bill, a person is immune from prosecution for using deadly force only if the victim makes an unlawful entry into the dwelling and the occupant believes they intend to commit a crime and use any degree of physical force, however slight. An El Paso County judge found Rau met the requirements for immunity, and the Court of Appeals upheld that decision in 2020.

During oral arguments before the Supreme Court, Rau's lawyer explained that the case implicated whether people in multifamily buildings had the same right to self-defense in areas that would unquestionably be covered in single-family homes. The prosecution, however, warned against giving people in congregate settings the right to shoot indiscriminately if they saw a face they did not recognize.

For that reason, Doyle Baker of the Fourth Judicial District Attorney's Office asked the court not to find that an entire building was fair game.

"A person in this situation is not defenseless. It’s not as if they have no ability to exercise self-defense. What they don’t have, if they’re not in their dwelling, is this uncommonly broad right to have deadly force," he said.

Samour, who referred to the Make My Day law as the "force-against-intruders" statute for accuracy's sake, wrote that Rau's use of his basement would have been incidental to the use of his residential unit. Therefore, it was part of the dwelling.

He acknowledged the argument from the government that the variety of living arrangements that exist in 2022 — including short-term rentals through companies like Airbnb — should lead the court away from categorizing "every nook and cranny" as part of a dwelling with the potential for use of deadly force.

"Rather than play legislators, we exercise restraint and limit our decision to the narrow situation in this case," he wrote. The basement of Rau's apartment building was "part of his dwelling when he shot (Russell). We decide nothing more and nothing less."

Tim Lane of the Colorado District Attorneys' Council, the organization representing the state's elected prosecutors, believed the court's opinion will still inform future judges in interpreting the Make My Day law, even if the justices declined to issue a sweeping rule.

"How future cases resolve those issues is unclear. What is clear is that the Colorado Supreme Court believes there is still confusion and that the responsibility to clarify is that of the legislature, and not the court," Lane said.

Although when the General Assembly enacted the Make My Day law the focus was on strangers breaking into the home in the middle of the night, an analysis of the first 23 criminal cases involving the law found no such scenarios. Instead, residents shot, stabbed or beat police officers, neighbors or romantic rivals. Lawmakers ended up revising the Make My Day law in 2016, solely to prevent inmates from being covered under the home-defense provisions.

Fountain police had no probable cause to deploy drug-sniffing dog, appeals court rules

An El Paso County judge wrongly concluded that Fountain police acted lawfully when they used a drug-detection dog to uncover illegal narcotics in a man's vehicle — even though there was no probable cause of a crime, the state's Court of Appeals ruled on Thursday.