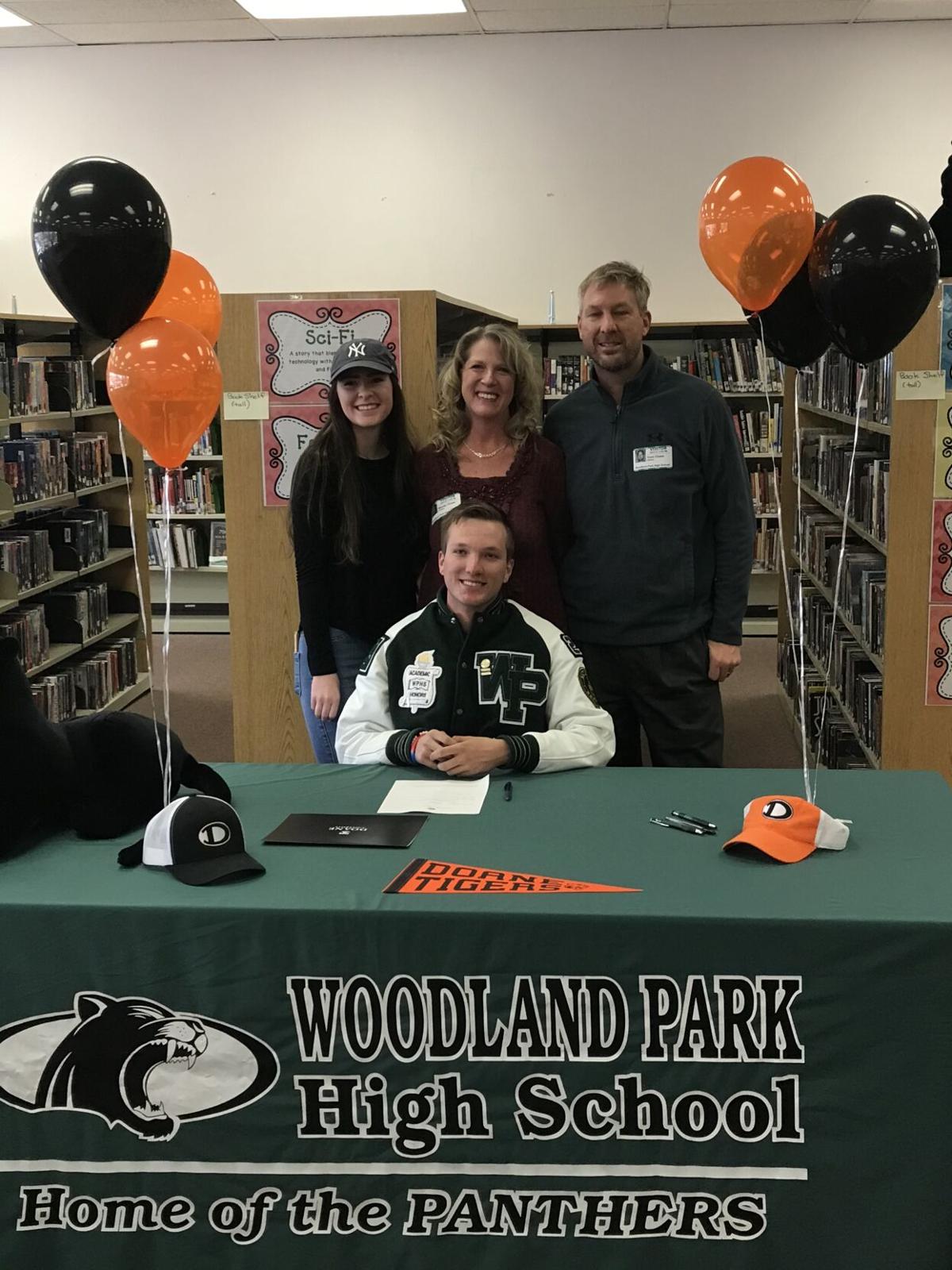 Woodland Park senior Cameron Chase, sitting, was joined by his family during his national letter of intent signing ceremony April 27 at the school. From left, sister, McKinsey, mother, Wendy, and father, Trent. 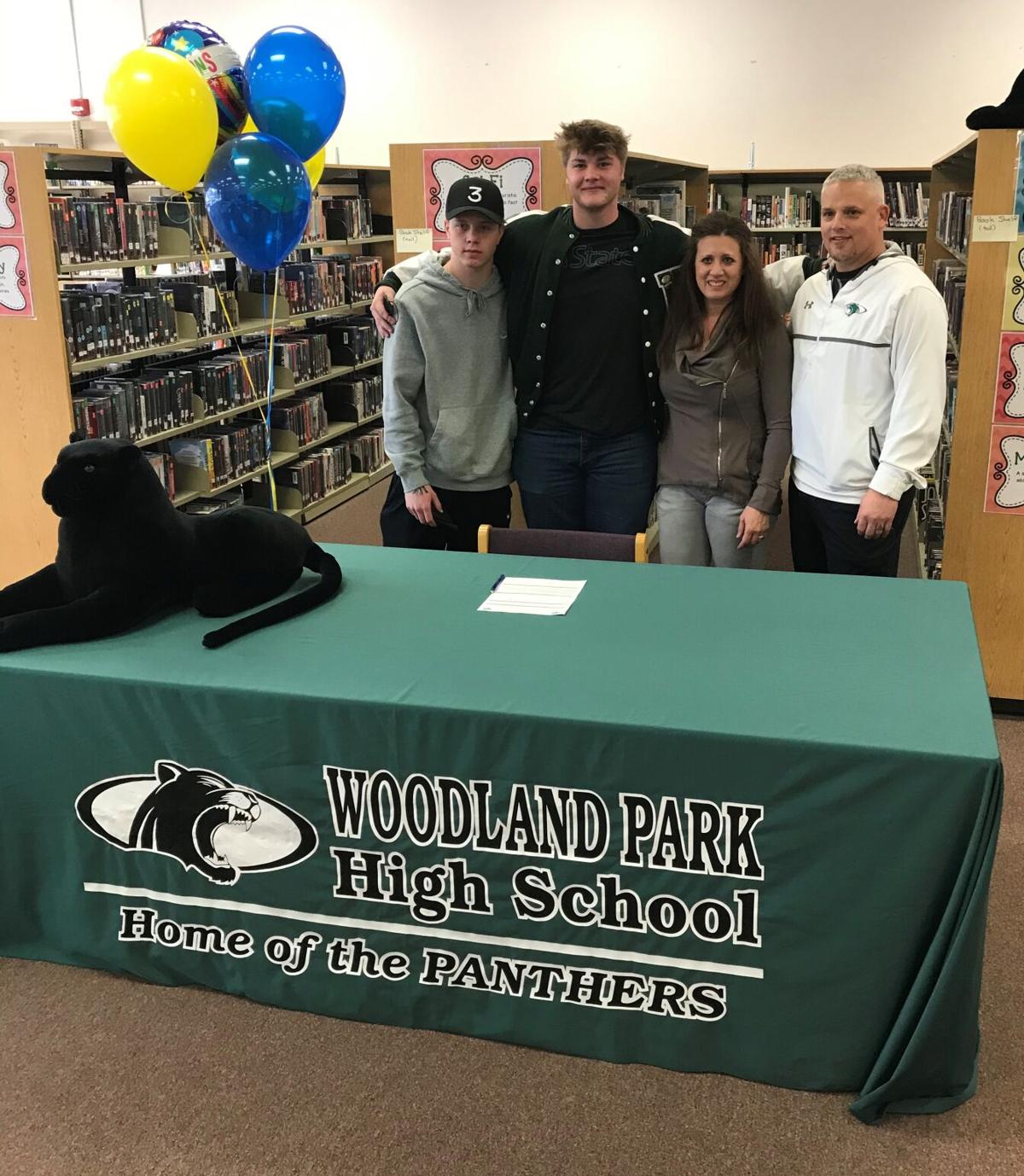 Woodland Park senior Griffin Owens, second from left, was all smiles during his national letter of intent signing ceremony April 27 at the school. He was joined by the Roskam family. From left: classmate Braden Roskam, Shannon Roskam and Joe Roskam.

Woodland Park senior Cameron Chase, sitting, was joined by his family during his national letter of intent signing ceremony April 27 at the school. From left, sister, McKinsey, mother, Wendy, and father, Trent.

Woodland Park senior Griffin Owens, second from left, was all smiles during his national letter of intent signing ceremony April 27 at the school. He was joined by the Roskam family. From left: classmate Braden Roskam, Shannon Roskam and Joe Roskam.

Woodland Park seniors Cameron Chase and Griffin Owens signed their national letters of intent during a party in high school library on April 27.

Chase will play baseball for NAIA Doane College in Crete, Neb. The left-hander is a multi-dimensional player, excelling as a pitcher, first baseman and outfielder.

Owens (6-foot-2, 270 pounds) will play football for Minnesota State Community and Technical College in Fergus Falls, Minn. He was recruited as an offensive lineman.

Chase has not played in a high school baseball game since his sophomore season in 2019. Last season was canceled by the Colorado High School Activities Association due the COVID-19 pandemic. But that did not keep Chase off the field from playing with his club teams.

“I’ve played probably 85 games in the last year,” he said. “I never really stopped, except for snow and cancellations.”

As a sophomore for the Panthers, Chase sported a .377 batting average while leading the team in RBIs (19) and extra-base hits (12).

“Doane said they want me to pitch and play in the field,” said Chase, who plans on majoring in electrical engineering. “It should be a really good fit academically and athletically.”

“Hopefully we get to play the full season,” Chase said. “It will be nice to get back on the field with everyone again.”

Chase thanked a lot of people for helping him get to this point in his life, including his former high school baseball coach Neil Levy, who died last year of cancer. He coached Chase his freshman and sophomore seasons.

“It would have been something totally different to have him here today,” Chase said. “He coached me since I was like 8. I played up, so I was always the little runt on the team.”

Owens was a three-year starter for the Panthers’ football team. He played a key role in the success of the 2019 squad that went 5-4, thus helping Woodland Park to its first winning season since 2005.

“At the end of the day, I felt I wanted to go to Minnesota because of the coaching staff,” Owens said. “Their coaching staff coaches a lot like Coach Roskam, and that really meant a lot to me.

“Coach Roskam always knows when to give you a pat on the back and a kick in the butt. He doesn’t believe in excuses. Everyone has one.”

During his time at Woodland Park, Owens has contended with a lot of turmoil — on and off campus. Roskam and his family invited Owens to live with them in their home. He will remain with the family until he heads off to college.

“The last four years have been a crazy ride,” Owens said. “Lots of ups and downs. But at the end of the day, everyone who’s supporting me today has had a huge impact in my life. I couldn’t be more blessed with the people around me.”

Roskam said he believes Owens is headed in the right direction.

“Minnesota State Community College is going to get a good one in Griffin,” Roskam said. “He went from being a chubby little kid to nearly squatting 500 pounds and moving people.

“Griffin has overcome a lot of adversity. He had to work really hard to earn this. We’ll see what happens down the road, but his could be one of those stories you make a movie out of.”

Due to NCAA rules involving COVID-19, all college football players last fall received a free year of eligibility. That means Owens will be competing against some players with much more experience.

“That kind of competition fuels me,” he said. “It keeps me moving. I have to keep my head on a swivel. Make sure I’m not lacking at practice or in games, or even in the classroom. I can be competitive.”