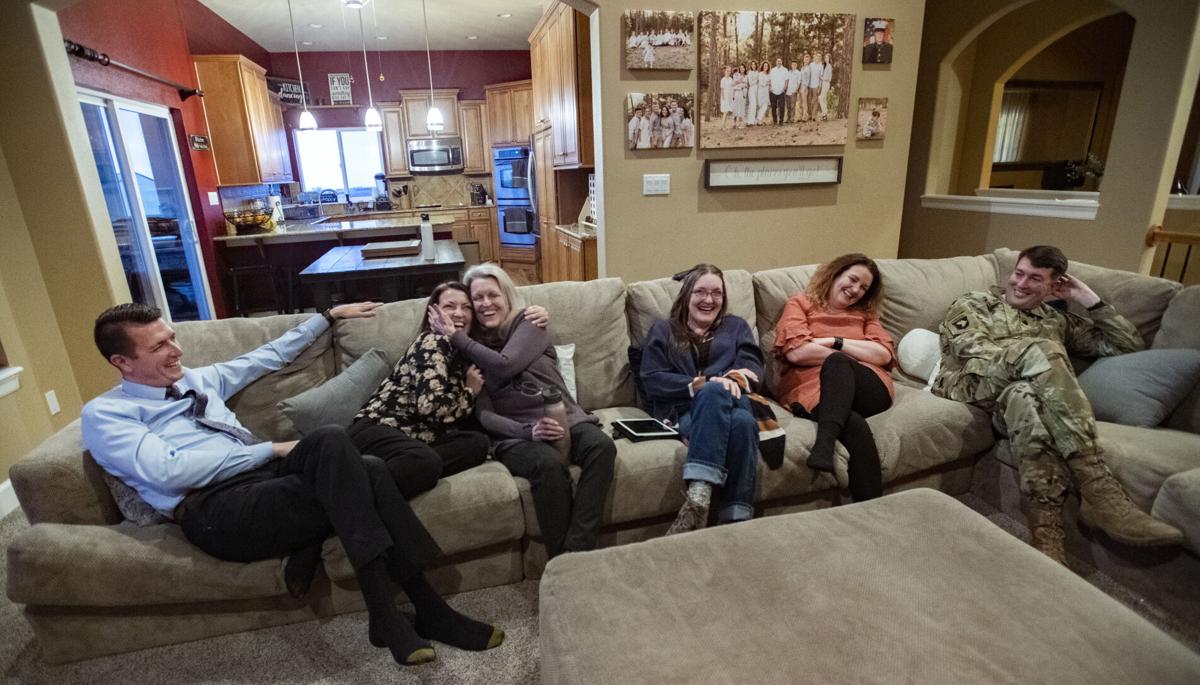 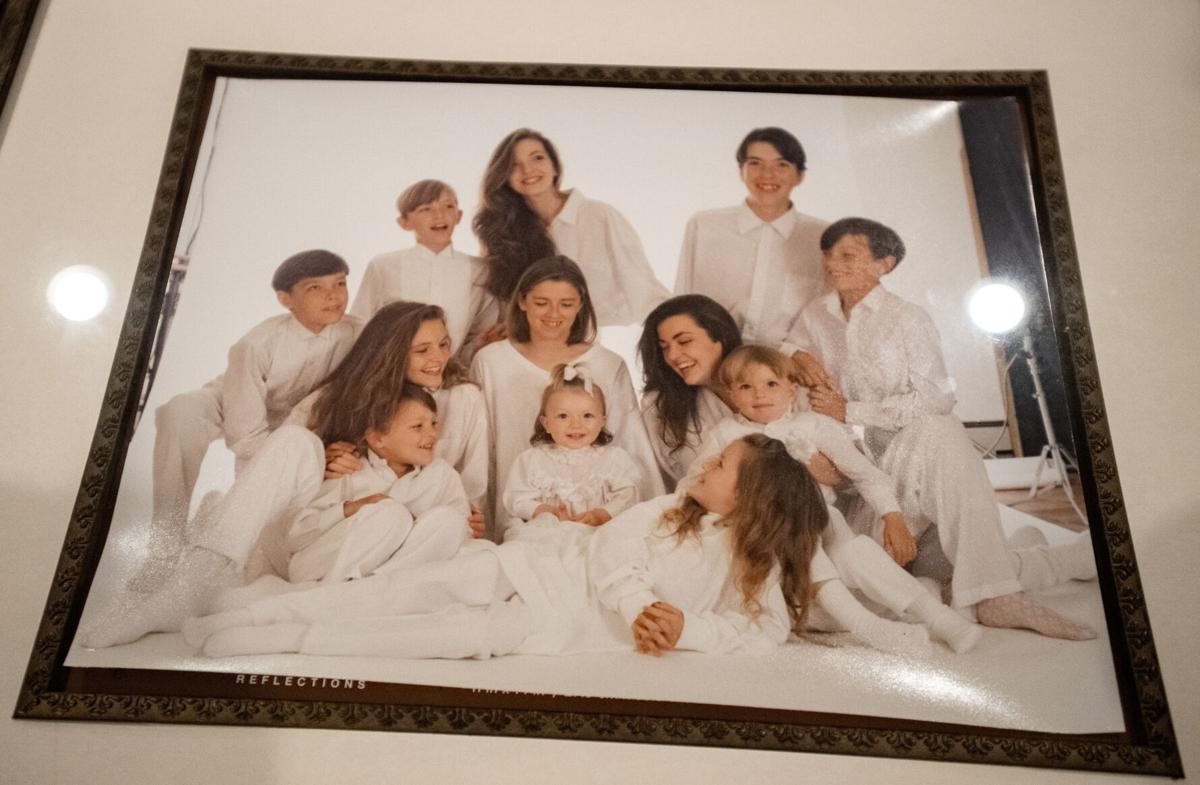 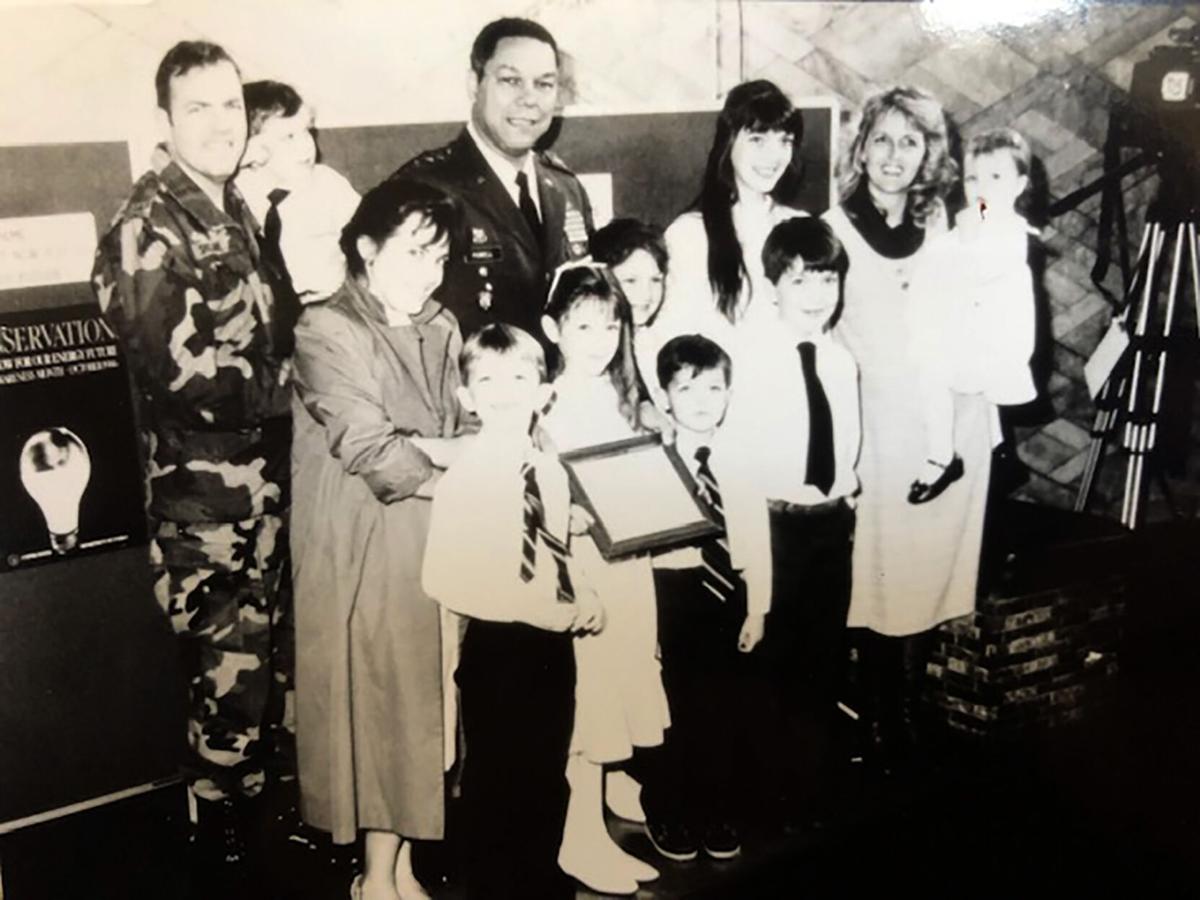 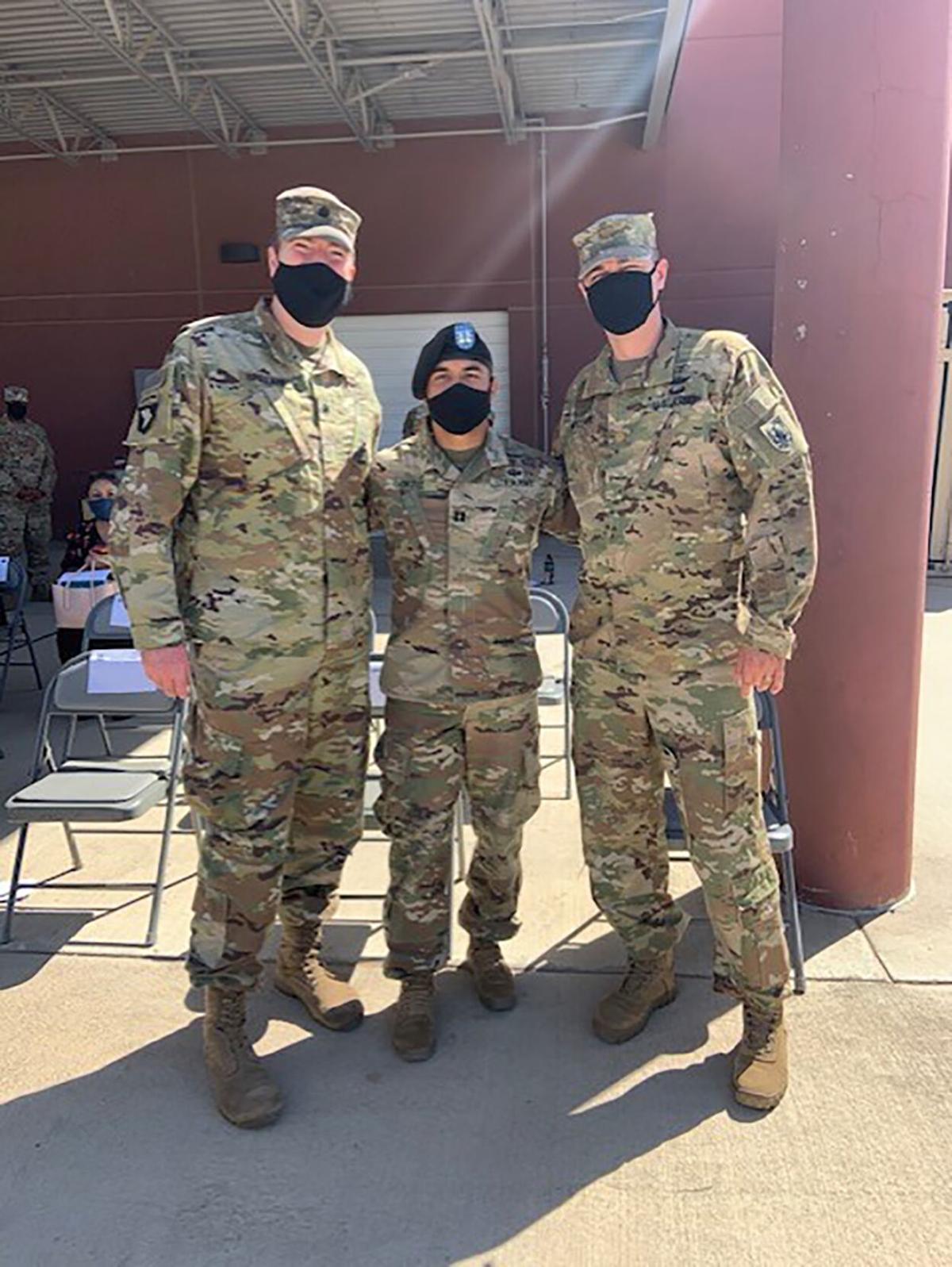 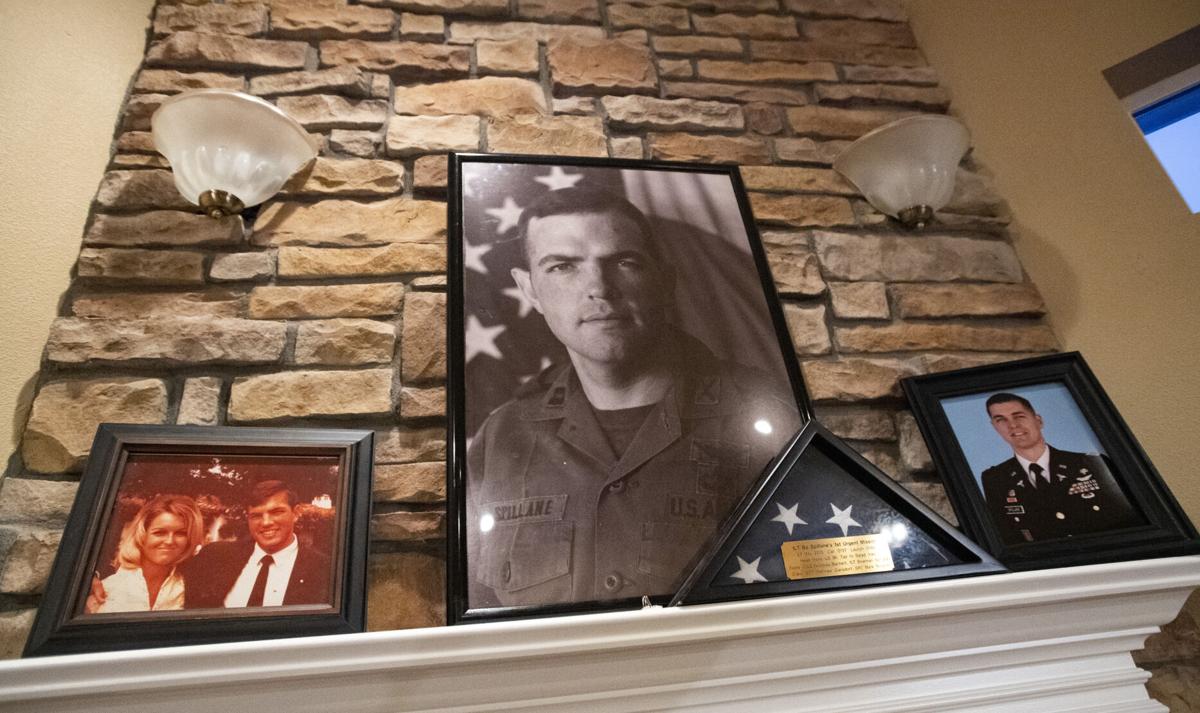 It was an accidental beginning that spawned fate, faith and a sprawling legacy that, today, can be hard to keep straight, even for a matriarch with a cheat sheet.

The Spillanes are a military family, like so many families, in Colorado Springs. They’re also a family that’s not like very many families at all.

“They were like the American von Trapps,” said Amy Johnson, who was unofficially adopted by the family when she was a young Army officer serving in Germany during the Reagan years. “At that time, they only had 11 kids, I think.”

The Spillane’s Aspen grove of a modern family tree began, as abiding love stories do, with a moment of serendipity.

Tom and Brenda Spillane met in the San Diego area, after Brenda — a local beauty queen, Miss Poway — walked down the sidewalk outside the store where Tom was shopping. Tom asked the pharmacist if he knew the name of the most beautiful girl in town. He did, and Tom looked her up.

“It was a blind date. I swore I would never go on another one of those, but I did,” Brenda said. “And he was just so cute, and had the most beautiful smile.”

What he didn’t have, though, turned out to be a deal-breaker, said Brenda, a member of The Church of Jesus Christ of Latter-Day Saints. Tom was Catholic, and Brenda knew that her future, as a wife and mother, would be with a man who shared her faith.

“All my friends were Catholic, but I knew I wanted to marry someone who’d gone through the Temple, and then we’d be married forever,” Brenda said. “I think we fell in love instantly but then our brains said no, it’s not going to work.”

Tom wasn’t about to let “the one” get away so easily, though. He studied Mormon teachings for a year, gained a testimony and was baptized, on Valentines Day, 1969, and the couple got engaged.

They married on Dec. 19 of the following year, the day after Tom graduated from Officer Training School. They immediately headed to North Carolina, where he attended Ranger School — one more step in an Army career that would span more than two decades and include service in counterintelligence, Special Forces, and as a Green Beret and helicopter pilot.

Tom came from a very military family, with deep Colorado roots. His dad was a colonel and a retired Army surgeon, his older sisters served and married servicemen, and his brother was in Vietnam.

Now their children, all 12 of them, do too. Their patriotism is personal.

Month of the Military Child

April is Month of the Military Child, set aside to honor the children of service members — children who didn't make the choice to join the military but who nonetheless shoulder the burdens of those duties, enduring long separations from loved ones and, on average, changing schools nine times between kindergarten and high school graduation.

The oldest, daughter Ashli, was born in 1972 at Fort Bragg.

Over the next dozen years, the family relocated more than a half dozen times stateside, to bases in Alabama, Texas, Georgia and California, as the Spillane brood continued to expand. By the time Tom was promoted to major and posted to Frankfurt, Germany, in 1984, there were four boys and four girls.

“We didn’t live on base because they didn’t have a big enough house,” said Summer Spillane Jordan, born in 1975 at Fort Hood, Texas.

For a while, the family shared the top floor of a building off base that once housed German officers.

“It had been the old maid’s quarters, and they unlocked the doors so we had all three units,” Brenda said. “It was five flights, though, so carrying up the groceries — and the laundry was in the basement — wasn’t fun … and I was pregnant with Number Nine.”

“Twelve kids, and no twins. I really don’t know how she did it,” said Ashli, now a mom of five.

Sometimes Brenda marvels at that, too. Raising a family of that size on a military installation thousands of miles from home — with a husband whose other duties included serving as base commander. And, doing it on what was standard officer’s pay at the time.

“Tom’s pay as a major qualified the family for free lunches,” Brenda said.

She remembers making French bread for dinner at the end of the month, when money ran out for expensive dairy ingredients. And Cheerios, lots of Cheerios.

“All I know is they would have died had it not been for Cheerios and her (Ashli). I was always pregnant and sick or nursing a baby, so she kept them alive with Cheerios,” Brenda said.

The kids were mostly oblivious to their parents’ financial plight — “We didn’t know we were poor,” said son Creed Spillane. “We just knew you couldn’t ask for seconds.”

They also didn’t realize, until later, the kind of perspective such an international upbringing instilled.

“I’ve found that my kids, their choices are very global. I’d say that’s true of all our kids,” Ashli said. “Because of how we were raised, and how we then raised our children ... the world is really big and they’re really comfortable in it.”

Something else the Spillane kids didn’t know back then: Mom made all their clothes, even underwear and swimsuits.

“That’s why I learned to sew,” Brenda said.

Keeping the kids out of trouble meant keeping them busy, with homeschool and chores, a full-time job in a household their size.

“If it was your time to do dishes it would take two hours, literally,” Ashli said.

There were more outward facing, and artistic, daily obligations, as well.

“One of my favorite stories was in Germany, it was a military community that had a bunch of community programs and community theater,” said Amy Johnson, who served as Major Spillane’s first lieutenant. “When they did ‘The Sound of Music,’ all the girls wanted to be in it … and Tom drove them.”

He hadn’t planned on joining the cast, but destiny stepped in.

Turned out, Tom Spillane had a beautiful singing voice.

So did his kids.

In Europe, the family traveled around in a stripped down and refashioned 15-seat van, often singing, dancing and performing at retirement homes, churches and gatherings, like a double-stuffed 80s Partridge Family with an Alpine twist.

When chores weren’t keeping them occupied, they were practicing dance routines, songs and musical instruments.

“Growing up in a military family, on diverse bases around the world, not only did I not realize that there was still racism in the United States, I didn’t know that other people didn’t rehearse after school every day,” said Ashli.

Johnson was so impressed by the Spillanes that, in 1989, she nominated them for the Great American Family award. They didn’t win, but were finalists and received a letter from First Lady Nancy Reagan.

Tom retired from the military in 1989, and the family returned to the states — first to California, where youngest daughter, Paris, was born in 1990. They moved several more times over the following decade, including to a farm in Missouri, where the younger siblings got to experience a “completely different” upbringing.

“There’s the ones of us who grew up in the military with dad gone all the time,” Summer said. “Then dad got out and dad was home all the time. And that worked out really well, because he had teenage boys at home.”

In 1999, move Number 34 brought them from Arizona to Colorado Springs, where sons Brennan and Bo were attending the Air Force Academy. Tom found work at The Broadmoor, ultimately as assistant general manager, and — as they always had, and would — his children followed in his footsteps.

“We had, I think, nine of us working at The Broadmoor, almost all at the same time,” said Creed. “Britton was in the golf shop, I was in sales and marketing, Bo and Stryder were in maintenance.”

Oldest brother Ryan, who is now the chief of operations at Evans Army Community Hospital on Fort Carson, worked night security when he wasn’t attending college. Brenda was assistant to the director of the spa, which is where she was working in 2004 when a surprise makeover team arrived from the “Live with Regis and Kelly” show, thanks to a “secret” nomination by daughter Rachel.

“They were going to fly my whole family there (to New York) for the big reveal,” Brenda said.

Clearly, Regis and Kelly didn’t know what they were getting into.

Today, Brenda is a grandmother of 65, and great-grandmother to 3. Seven of her children live in Colorado Springs. Ashli, Summer and their families share a big home in Peyton, and Brenda lives in a fifth-wheel parked out back.

“Since the older kids started growing up and moving out ... three times is all we’ve all gotten together. Just three times,” Brenda said.

They’d been planning a big reunion in Estes Park, for an extended family of more than 100 who live around the globe — who are now busy growing their own families, many within the military community.

The last time all the siblings were in one place, at one time, however, was for the funeral.

His funeral was also the last time the Spillane children performed together, and the first time they had all done so, through tears.

They sang a song written by Ashli, “Legacy,” celebrating their dad — what he’d given to them, and to everyone he knew.

“If there was one thing about dad, every person he talked to, whether it was a gardener, whether it was a head of state, he treated them like they were the most important person in their life at the moment,” Ashli said. “Everybody left feeling like Tom Spillane thought they were important. And that legacy — of faith, of love — made everything else in our lives seem trivial. Which makes life a lot easier.”

No matter how many times you move.