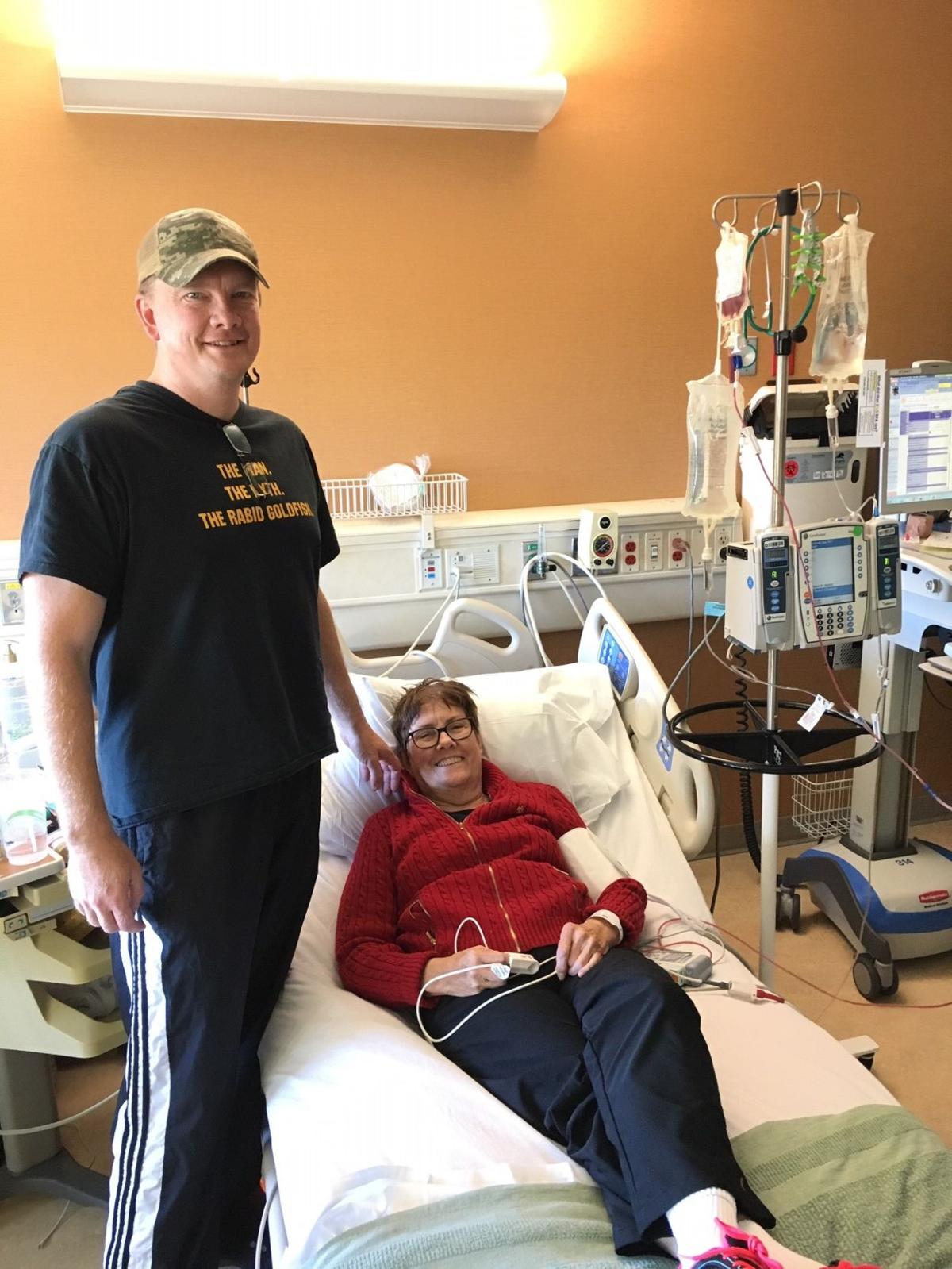 Sean Spradling spends time with his mom, Nancy Spradling, as she recovers from a bone marrow transplant. Sean was her donor. 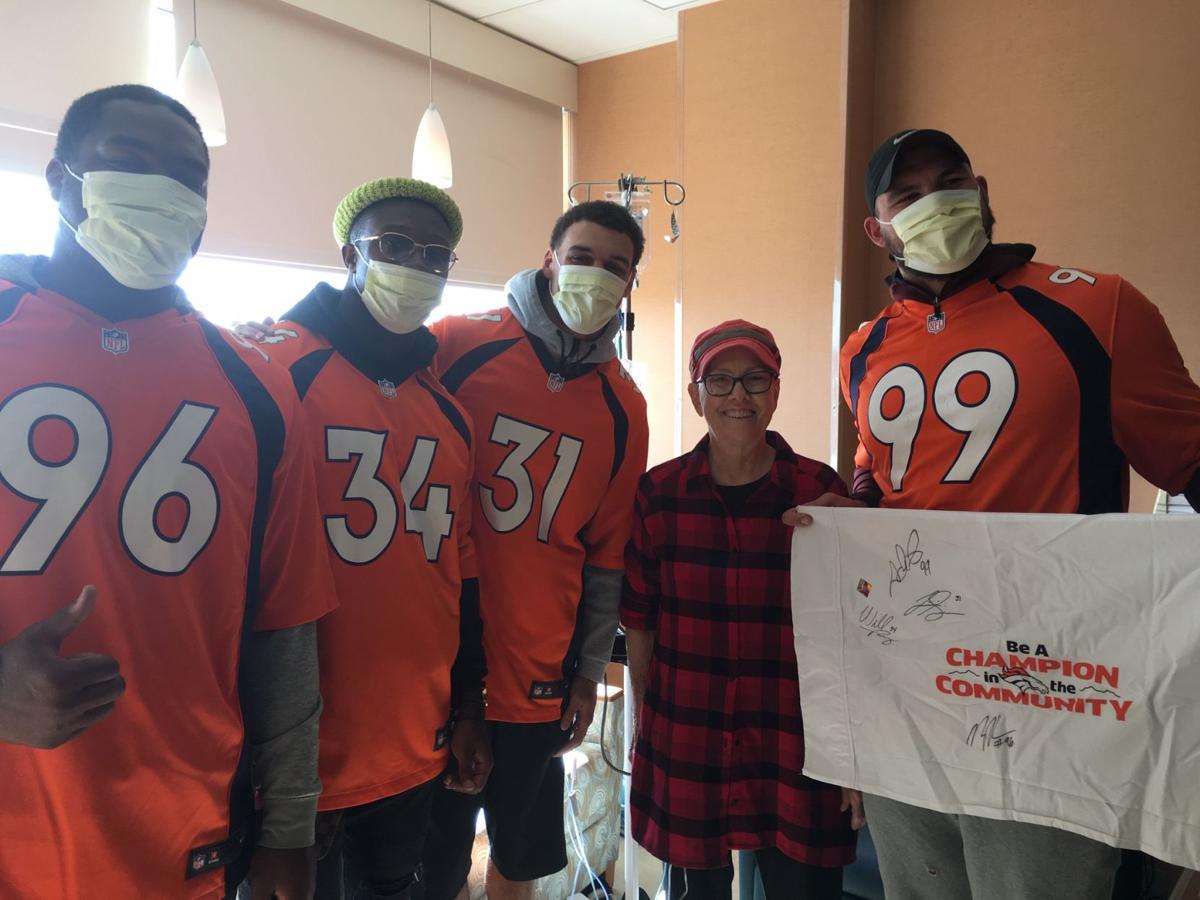 Woodland Park resident Nancy Spradling hangs out with members of the Denver Broncos team while recovering from a bone marrow transplant. 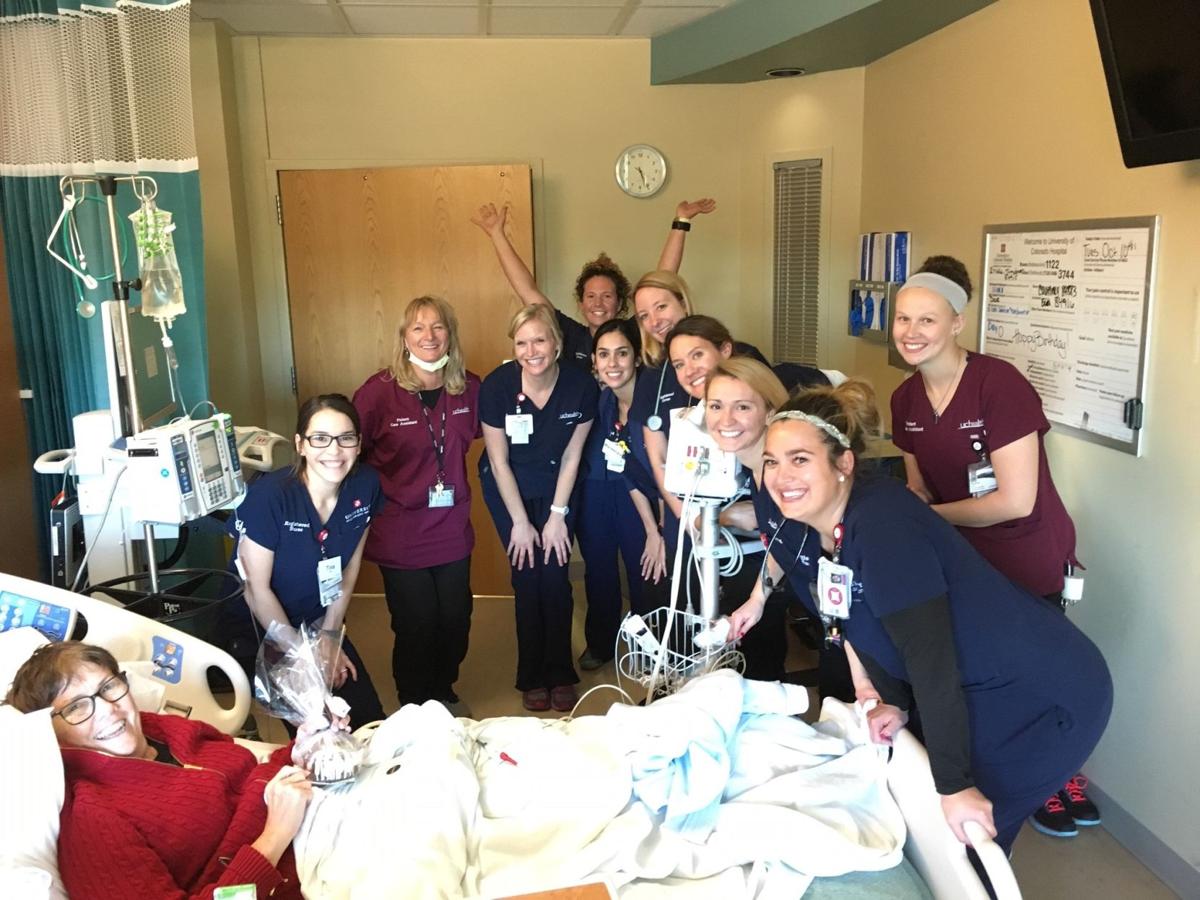 Woodland Park resident Nancy Spradling recovers from a bone marrow transplant at the Anschutz Medical Campus in Aurora. Nancy’s son, Sean Spradling, was her donor. Celebrating her recovery with Nancy are members of the campus medical team.

Sean Spradling spends time with his mom, Nancy Spradling, as she recovers from a bone marrow transplant. Sean was her donor.

Woodland Park resident Nancy Spradling hangs out with members of the Denver Broncos team while recovering from a bone marrow transplant.

Woodland Park resident Nancy Spradling recovers from a bone marrow transplant at the Anschutz Medical Campus in Aurora. Nancy’s son, Sean Spradling, was her donor. Celebrating her recovery with Nancy are members of the campus medical team.

Nancy Spradling, longtime Woodland Park resident, had no clue about 18 months ago that her life was about to drastically change.

While seeking medical treatment for another condition in May 2017, Spradling had routine blood tests. Some were concerning. It was possible she had cancer. Doctors ordered more tests.

For Spradling, telling her family that doctors were concerned she might have cancer was difficult. The family digested the news, then took action.

Sean Spradling, Nancy’s youngest son and a 1991 graduate of Woodland Park High School, and David Spradling, the oldest son, were taught by Nancy and her husband, Dave Spradling, to persevere. So, that’s what they did. Dave, being a retired Army Deputy Garrison Commander at Fort Carson, knew just how to take charge of the situation.

Nancy consulted with Dr. Brad Haverkos, a cancer expert at UCHealth University of Colorado Hospital and an assistant professor at the University of Colorado School of Medicine. After a series of tests, Spradling learned in July 2017 that she had T-cell prolymphocytic leukemia, a rare and often life-threatening disease.

Haverkos explained the options to the Spradlings, and they decided the best course of action would be for her to begin taking a cancer therapy drug called alemtuzumab several times per week, which would put her in temporary remission. Knowing this drug would only work for 10 to 12 months, they decided a bone marrow transplant would be Nancy’s best shot at overcoming the disease.

Patients often look for donors among siblings and other relatives. Unfortunately, Spalding’s brother was not a match. Each of her sons was a 50 percent match, and Haverkos recommended that Sean, who is young, in good health and lived the closest, be the donor.

There would be risks involved, such as infection and graft versus host disease, so the Spradlings rented an apartment close to the Anschutz Medical Campus in Aurora, knowing that they would be there for at least three months following the transplant. This was quite a change from their spacious home in Woodland Park, but they were willing to do whatever was necessary to ensure the treatment’s success.

“I cannot imagine having gone through leukemia without Dave by my side,” Nancy said of her husband’s support. “He supported the decisions and helped with my care. I can’t begin to express how blessed I feel to have such a supportive husband.”

“There was never any question that I’d do this for my mom,” he said.

Though Sean has had a lifelong fear of needles, he sat calmly with needles in both arms as experts harvested 8 million stem cells. Nancy’s medical team then transplanted 5 million stem cells into her and stored 3 million more in case Nancy ever needed another transplant.

Haverkos said Nancy is now doing well. “Nancy is currently in complete remission and is likely cured,” he said. “She is not your typical 75-year-old patient. She’s healthy, highly motivated and did everything we asked her to do. It’s a testament to her to go through all of this with such a great outcome.”

Nancy continues to have her bloodwork checked every three months. Eventually, she’ll only need follow-ups every six months, then every year.

“I cannot put into words what it means to have had my son as my bone marrow donor,” Nancy said. “Our bond is stronger than ever.”

Nancy loves the circle of love in their family. First, she gave Sean life. Then he, in turn, gave her life.

The holidays have been all the more special this year.

“I feel like I’ve been given a second chance at life,” Nancy said. “I feel stronger all the time and can’t wait to travel and get back to doing all the things I love.”