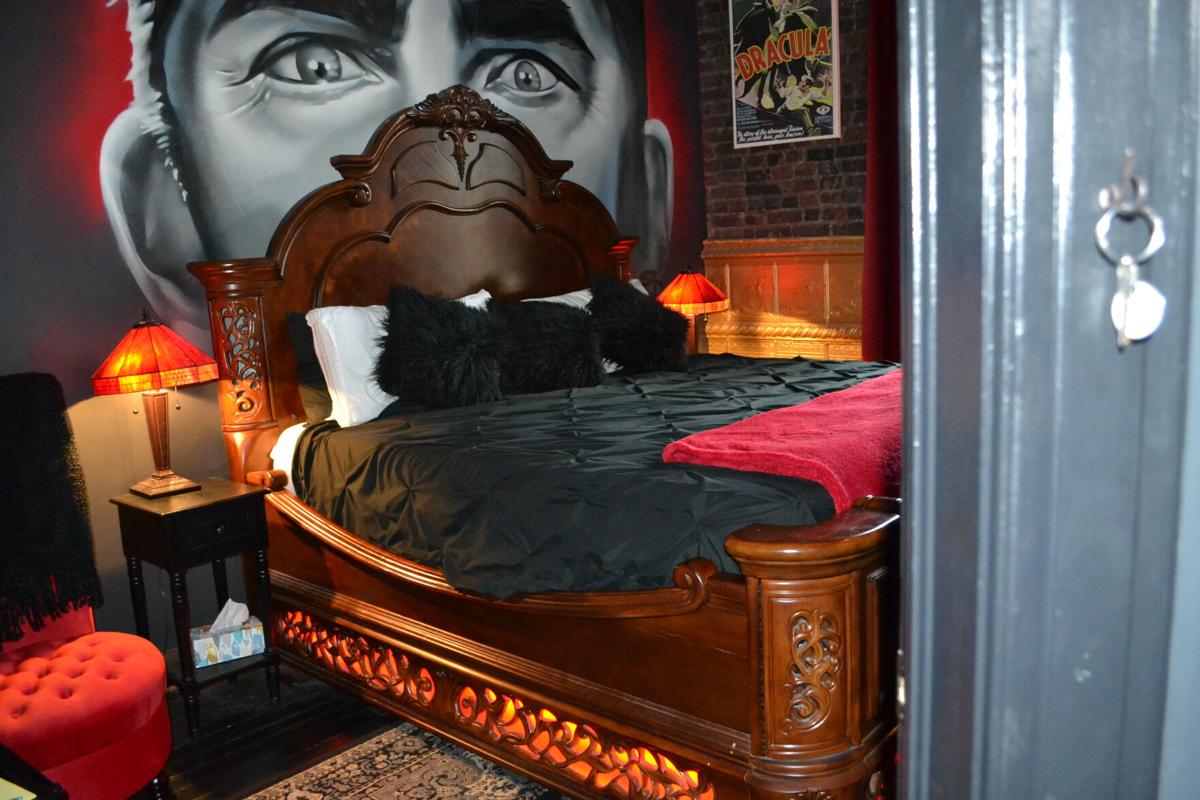 The piercing eyes of Bela Lugosi over the bed in the room inspired by the actor at Black Monarch Hotel in Victor. 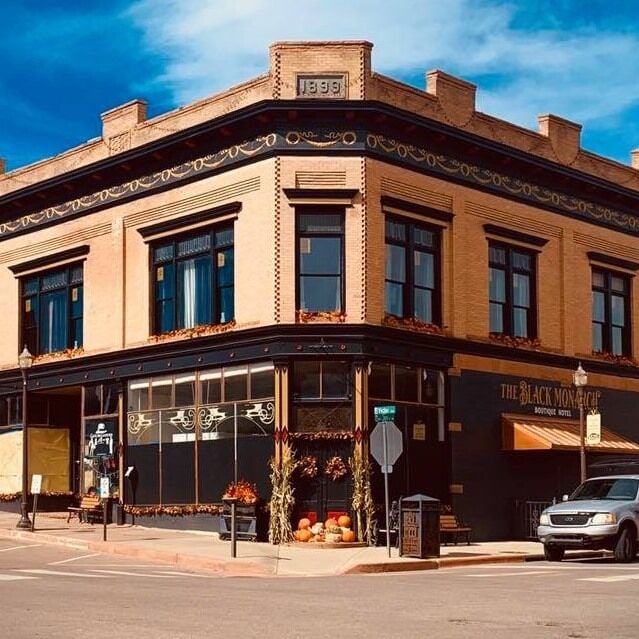 The Black Monarch Hotel, 301 Victor Ave., Victor, was originally the Monarch Hotel, a casino, hotel and brothel, according to hotel’s Facebook page. It is pictured here in October 2020. 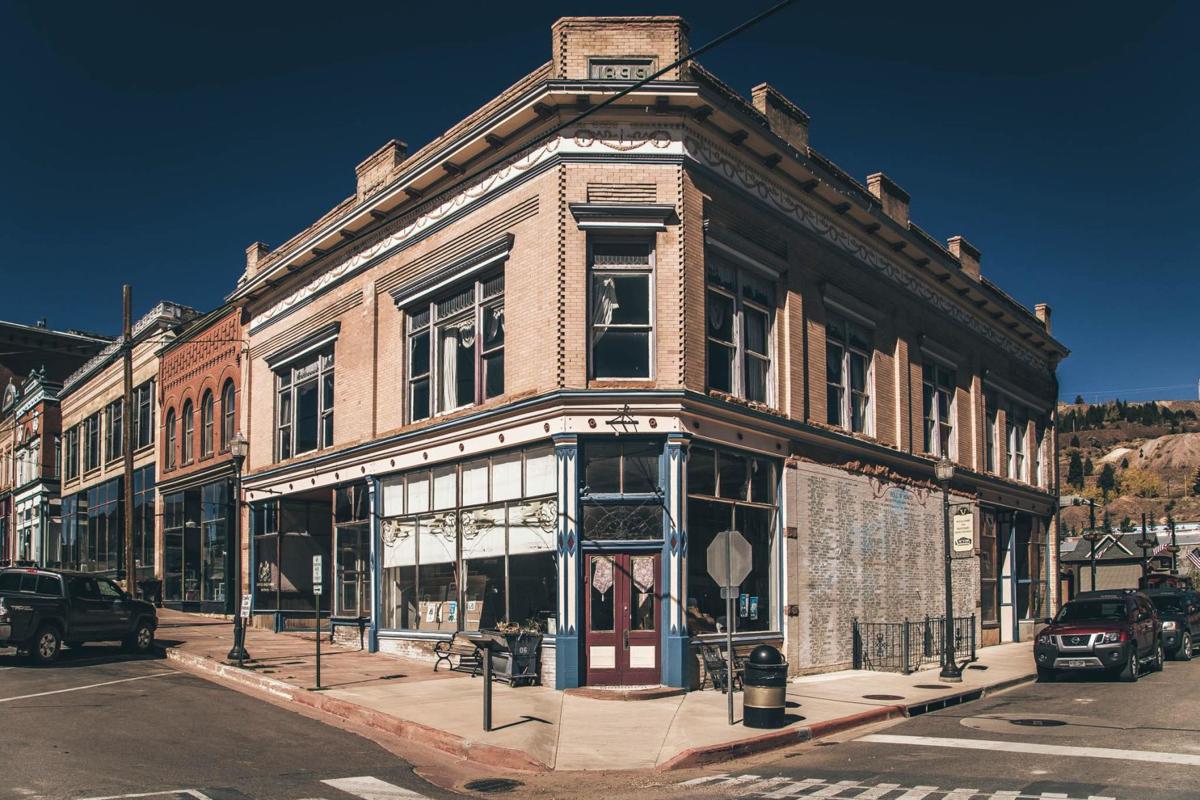 The Black Monarch Hotel in Victor is pictured in 2018.

The piercing eyes of Bela Lugosi over the bed in the room inspired by the actor at Black Monarch Hotel in Victor.

The Black Monarch Hotel, 301 Victor Ave., Victor, was originally the Monarch Hotel, a casino, hotel and brothel, according to hotel’s Facebook page. It is pictured here in October 2020.

The Black Monarch Hotel in Victor is pictured in 2018.

VICTOR • The Black Monarch Hotel has increased the number of its unique — and possibly haunted — themed rooms by three.

New to the boutique hotel at 301 Victor Ave. are rooms that celebrate Bela Lugosi, Jack the Ripper and Lizzie Borden.

But it’s the room themed for Lugosi’s legendary role as in the 1931 horror movie “Dracula” that’s garnering all the attention.

Adam Zimmerli, owner of The Black Monarch, gained permission from LUGOSI LLC, a family-owned enterprise whose mission is to protect and extend the legacy of their patriarch, Bela Lugosi, to launch the room.

“The Lugosi family is thrilled to support the Bela Lugosi room at The Black Monarch Hotel,” said Lynne Lugosi Sparks, granddaughter of Bela Lugosi and CEO of LUGOSI LLC.

“We hope that guests enjoy the unique decor and experience the vibe that exudes from the room — that indelible mark left on our culture by Bela Lugosi and his iconic portrayal as Dracula,” she said.

Lugosi was born in Hungary as Béla Ferenc Dezső Blaskó in 1882. He took the stage name Lugosi from his hometown in Lugos, Hungary. He came to the United States in 1920, went through Ellis Island in 1921, and became a naturalized American citizen in 1931.

In 1927, he created his original characterization Count Dracula for his role in the Broadway adaptation of Bram Stoker’s 1897 novel. In 1931 he brought his unique characterization of the famous vampire to the Universal Pictures film “Dracula.”

An interesting sidenote, Lon Chaney, a famous Colorado Springs silent film actor, had been in contract negotiations to play Dracula, but died of cancer in 1930. The role made Lugosi a horror film icon.

Although Lugosi is best known for his role as “Dracula,” he only played the character on film twice. He appeared on stage hundreds of times over his career and performed in 113 films and shorts.

His legacy included creating the benchmark for all future depictions of the “Dracula” character, including the formal dress and dramatic cape, makeup, hand gestures, and his native Hungarian accent. The film accentuated his penetrating eyes — eyes that sent shivers down the spines of his victims as well as the audience.

Those very eyes, as they peered over the bed while his unsuspecting victim slept, are what the guest gets above the bed the themed room at the Black Monarch. The room is tastefully and dramatically decorated with an eerie feeling as the red light from the bottom of the bed glows faintly across the floor. Staying there would be a night to remember. As Lugosi is quoted as saying, “To win a woman, take her with you to see ‘Dracula.’”

The gift shop is open and the coffee shop is planned to open later this summer. The gift shop carries unique and unusual items, including apparel to commemorate a visit to the Black Monarch. The coffee shop will offer coffees, lattes, and expresso as well as tea and light foods.

The Monarch Hotel was built as a historic saloon, casino, and brothel in Victor, according to The Black Monarch’s Facebook page.

Zimmerli is constantly working and conjuring up new ideas for The Black Monarch and one can only guess what he’ll design next.