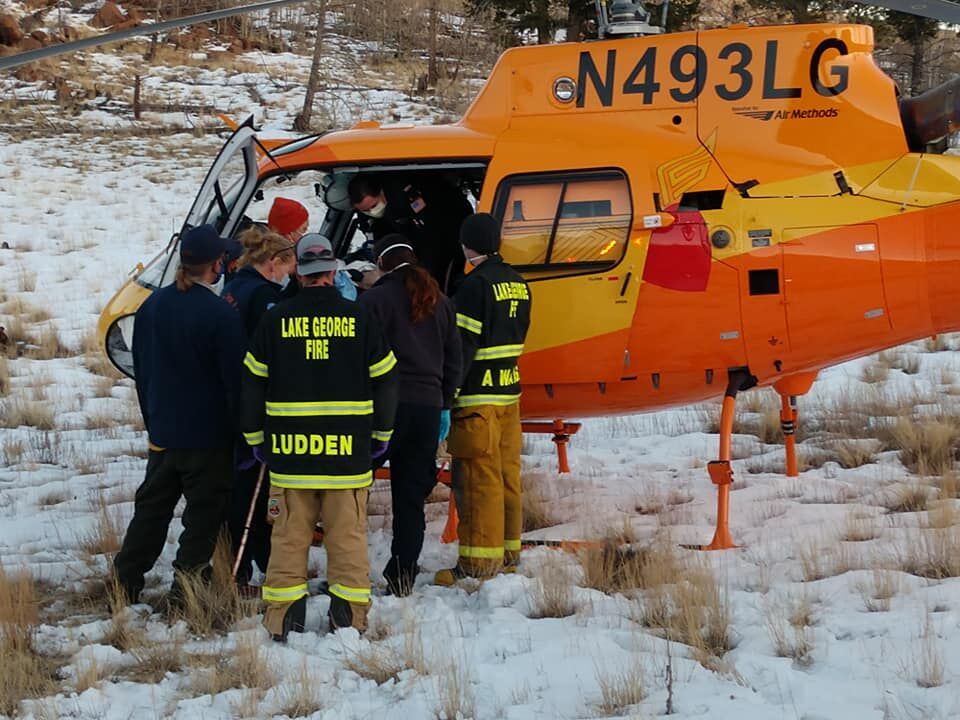 Volunteers with Lake George Fire Protection District responded to an accident, first establishing a landing zone for Flight for Life. 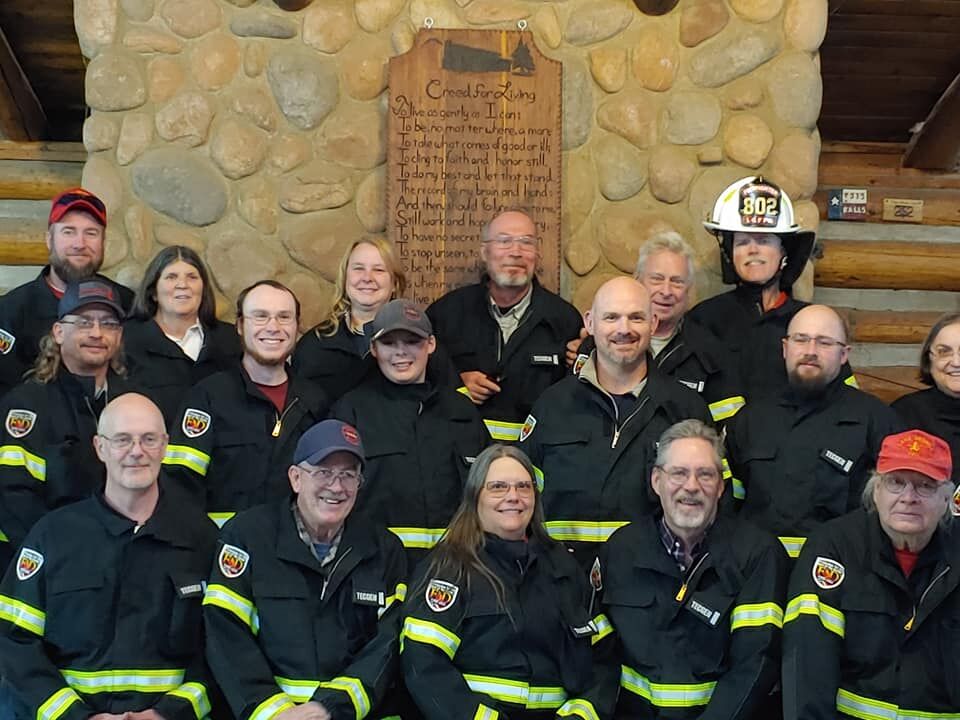 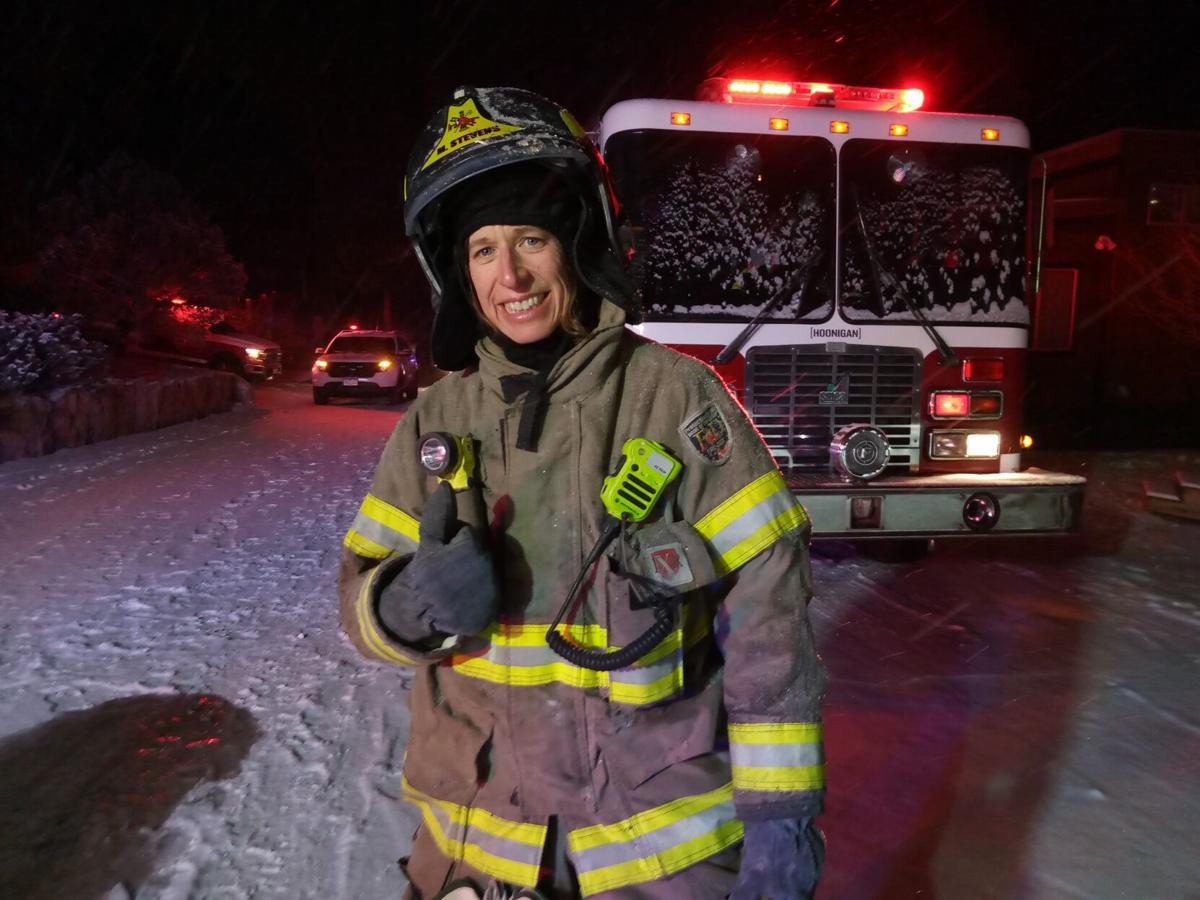 Molly Stevens, volunteer with Green Mountain Falls/Chipita Park Fire Protection District, responds to an accident in the middle of the night in frigid weather.

Volunteers with Lake George Fire Protection District responded to an accident, first establishing a landing zone for Flight for Life.

Molly Stevens, volunteer with Green Mountain Falls/Chipita Park Fire Protection District, responds to an accident in the middle of the night in frigid weather.

Editor’s note: This is the latest in a series of articles about the emergency services system in Teller, Park and El Paso counties.

Volunteers for small firefighting districts are the unsung heroes in rural and remote areas in the Pikes Peak Region.

While big-city fire and emergency services responders are paid employees, it’s volunteers in Lake George and Green Mountain Falls/Chipita Park answer the calls. Most work full-time elsewhere, yet are prepared and willing to respond whenever a call comes in.

Jeremy DeWall, a UCHealth physician, is the medical director for both districts, which are members of the Teller County Regional EMS Council.

In Lake George in unincorporated Park County, Susan Bernstetter is the chief of the fire protection district and the only paid (non-volunteer) employee in the district.

With 23 volunteers who are a median age of 60, Bernstetter’s troops share the load. While the younger ones are on tap for the most strenuous rescues, others may drive the trucks or deliver water to the firefighters.

In the year of the pandemic, calls multiplied as coronavirus shut-ins flocked to the national forest to recreate. “They were out of work, couldn’t do anything ... and the governor said to enjoy the great outdoors,” Bernstetter said, with a slight tinge to her voice.

Ready to play in the woods, visitors bought ATVs, rode them without helmets and crashed, she said. “That was huge – accidents could be anything from simple bumps and bruises to spinal and head injuries.”

Chainsaws became the tool of choice in the forest, with resulting accidents — some life-altering. “Or we had people working on their houses, where they’d fall off the roof,” Bernstetter said.

The volunteers are trained emergency medical responders who provide basic life support for the initial response. “We take vitals, control bleeding, clear airways,” she said. “We do mutual aid with Florissant and Guffey fire departments.”

Due to the collaboration with other agencies, the volunteers play a key role in rescue missions. “We depend on Ute Pass Ambulance District and Flight for Life,” Bernstetter said. “But we do everything we can to keep people alive until help gets there. We’re the first step.”

That first step was crucial in the recent rescue of a woman who was stranded while rock climbing in Park County.

Volunteers from Lake George arrived first to the remote area.

“One of my volunteers was able to get on the rock with her, give her water; she wasn’t hurt, and he got her moved into the shade a little bit,” Bernstetter said. “They were up there for couple of hours; he couldn’t get off the rock either so he stayed with her to keep her calm.”

Another volunteer organization, Teller County Search & Rescue, sent a high-angle crew to the site, where they lowered the woman and the volunteer to safe ground.

Lake George volunteers are a vital resource for the professional responders. “When helicopters come in, we have to be trained on how to find good landing zones,” she said. “You have to watch for power lines or uneven ground.”

After 12 years with the district, and working as chief for the past three, Bernstetter contributes her institutional knowledge about locations. “Google Maps is not always your friend, not up here,” she said. “It can take you to some interesting places.”

When vehicle crashes happen in blizzard conditions on U.S. 24, Lake George volunteers seek permission from appropriate authorities to respond first. “On a dangerous highway, we can push cars off the road, get everybody safe and take people back to our station to wait for a deputy, state patrol or their families to pick them up,” she said, adding that some crashes require an ambulance or Fight for Life. “We keep them inside and warm.”

Some of the victims in these crashes are skiers racing to the slopes. “In a snowstorm they continue to pass,” Bernstetter said. “Some don’t get to go skiing.”

These days, the chief is building a reserve fund for new equipment for both fire and medical. “It’s imperative that they have the right equipment,” she said. “I didn’t create the emergency and can’t have one of my volunteers have an emergency of their own. Each year I’m building on basic supplies and getting them up to where we should be.”

Bernsetter works long hours. “I love what I do,” she said.

In the mountain community where the Green Mountain Falls/Chipita Park Fire Protection District has a new state-of-the-art fire station, the department still relies on volunteers for emergency responses.

“It’s hard to recruit and retain volunteers,” said Tyler Stevens, medical captain for the district, one of 20 volunteers under the direction of Chief Steve Murphy, who is paid.

To be certified as firefighters and/or emergency medical technicians, the volunteers train for six months. “And we have to be willing to commit up to three hours on a call and away from home,” Stevens said.

Of 90 calls since January, 70% have been medical. “The EMS side of the department is to help the community provide care by first responders in collaboration with all the other agencies,” he said.

Stevens and his wife, Molly, are the only married couple among the volunteers. Recently, the two responded together to a call from Ute Pass Regional Ambulance District.

The UPRAD staff was transporting a patient in cardiac arrest from Pikes Peak Regional Hospital in Woodland Park to Memorial Hospital in Colorado Springs. “They pulled over on the highway, called us, and Molly and I were able to hop in the ambulance and help them,” Stevens said. “That’s a way to have surge support and help that patient have better care.”

Some calls for help require volunteers to have exceptional physical fitness. “Many of the medical calls are from hikers because we go on the Manitou Incline and Barr Trail,” Stevens said. “We also respond up to Pikes Peak — which is really for Colorado Springs — but it’s pretty far for them to come.”

The calls from the top of Pikes Peak are usually from tourists who forget about the rise in elevation from 7,800 feet to 14,000 feet. “People come from low altitude and immediately go up on Pikes Peak,” Stevens said. “Some are traumatized and have to be defibrillated.”

The district’s calls range from rescuing a parakeet stuck in a tree to responding to car crashes, carbon monoxide alarms or assisting citizens at home. “Maybe someone has fallen and can’t get up by themselves and they call us,” Stevens said. “We come and help, check their vitals to make sure they are OK.”

Obviously, volunteering is a commitment for a man who runs his own business, like Stevens. “I enjoy helping out, love having the ability to be involved, along with the challenges, working with other people to solve problems,” said Stevens, who is the owner and general manager of Complete Kitchens in Colorado Springs. “EMS is the hidden side of public service.”

Especially during the isolation period over the past year, the volunteers are a resource for more than just treating the incident. “We walk by dozens of doors in our neighborhoods and don’t know what’s happening,” he said. “But when people are dialing 911, we enter and see what those physical, medical or psychological issues are, and we can lend a hand to help them.”

In partnership with UCHealth, the volunteers received monthly training with Christine Sines, who chairs the EMS Council. “UCHealth is responsible for what we do in the field, so it’s in their best interests to see that we are well-trained,” Stevens said.