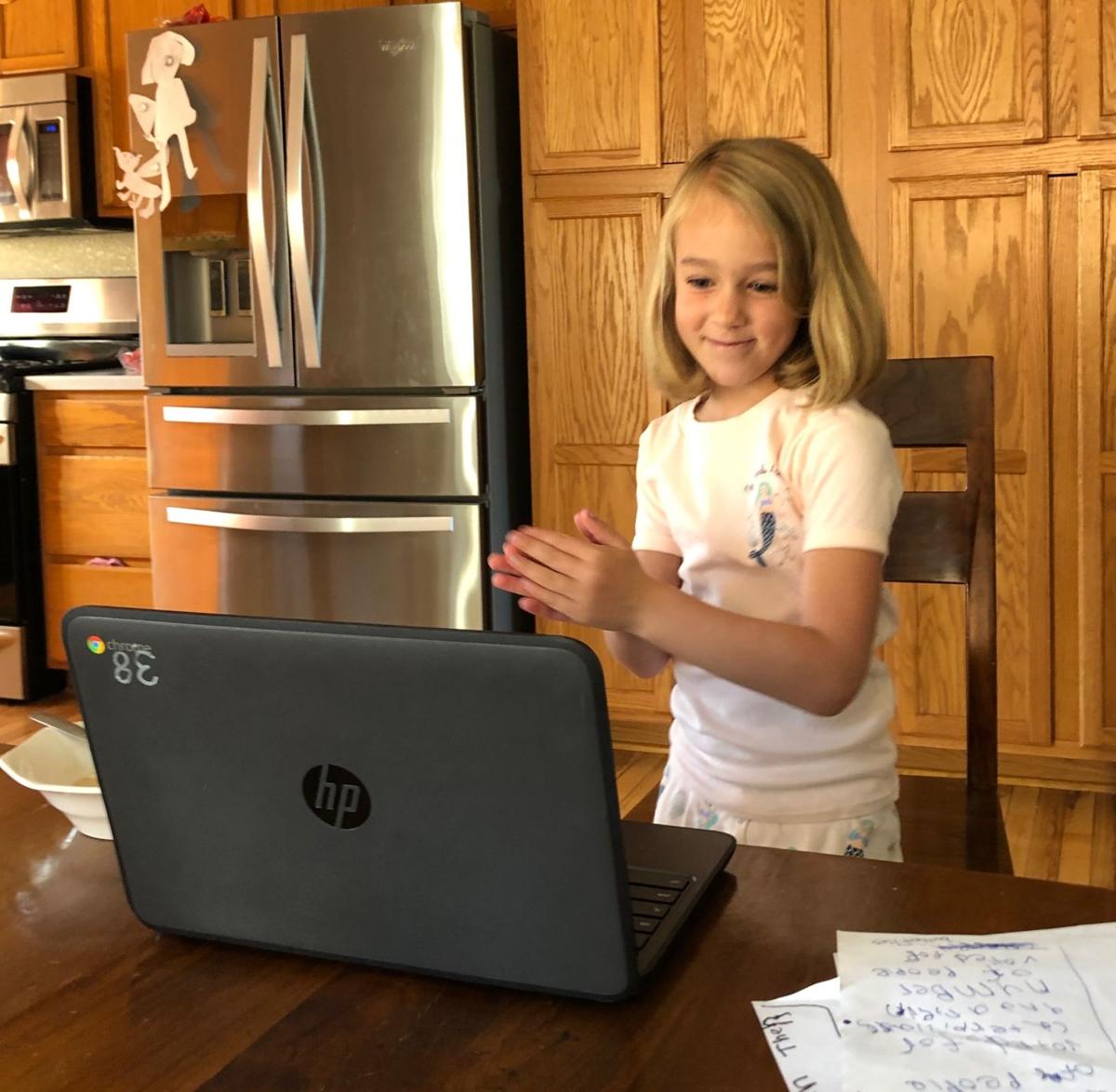 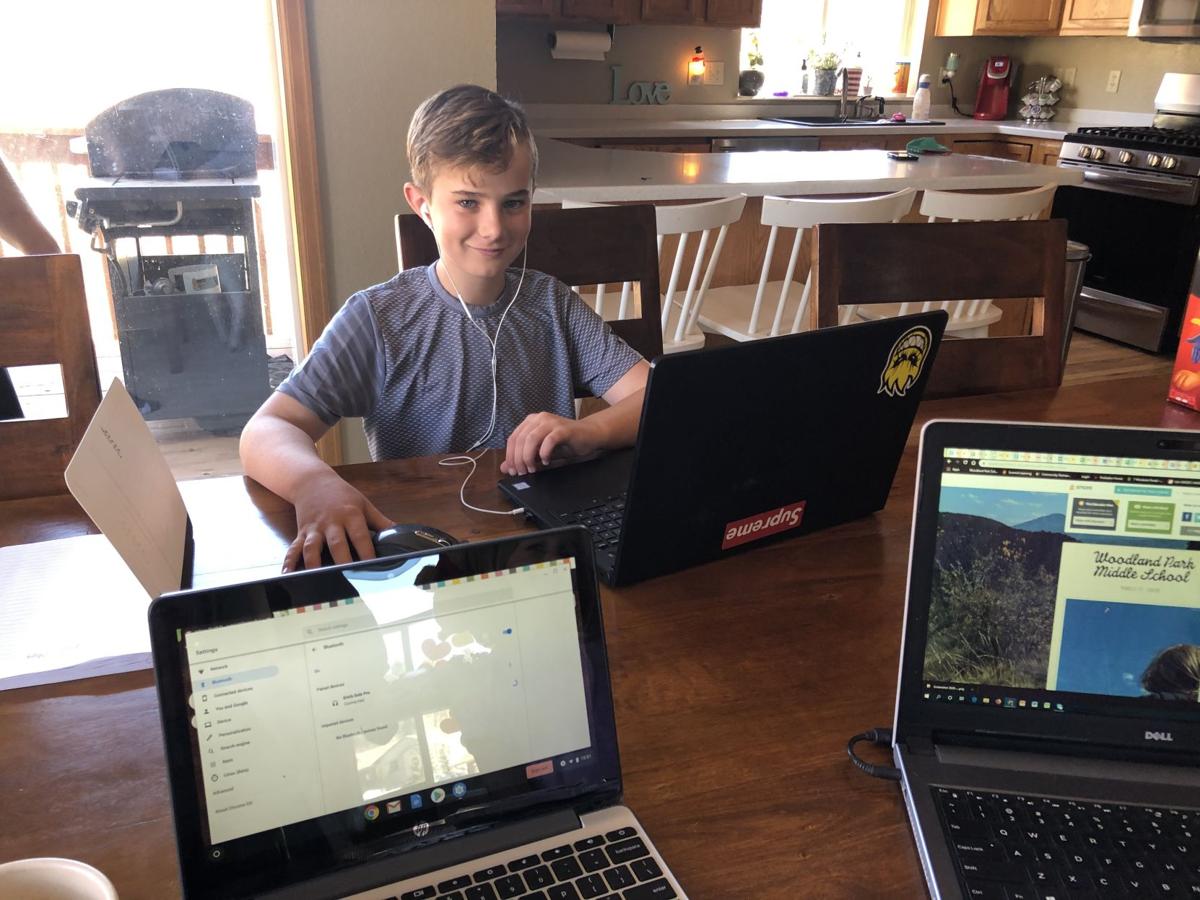 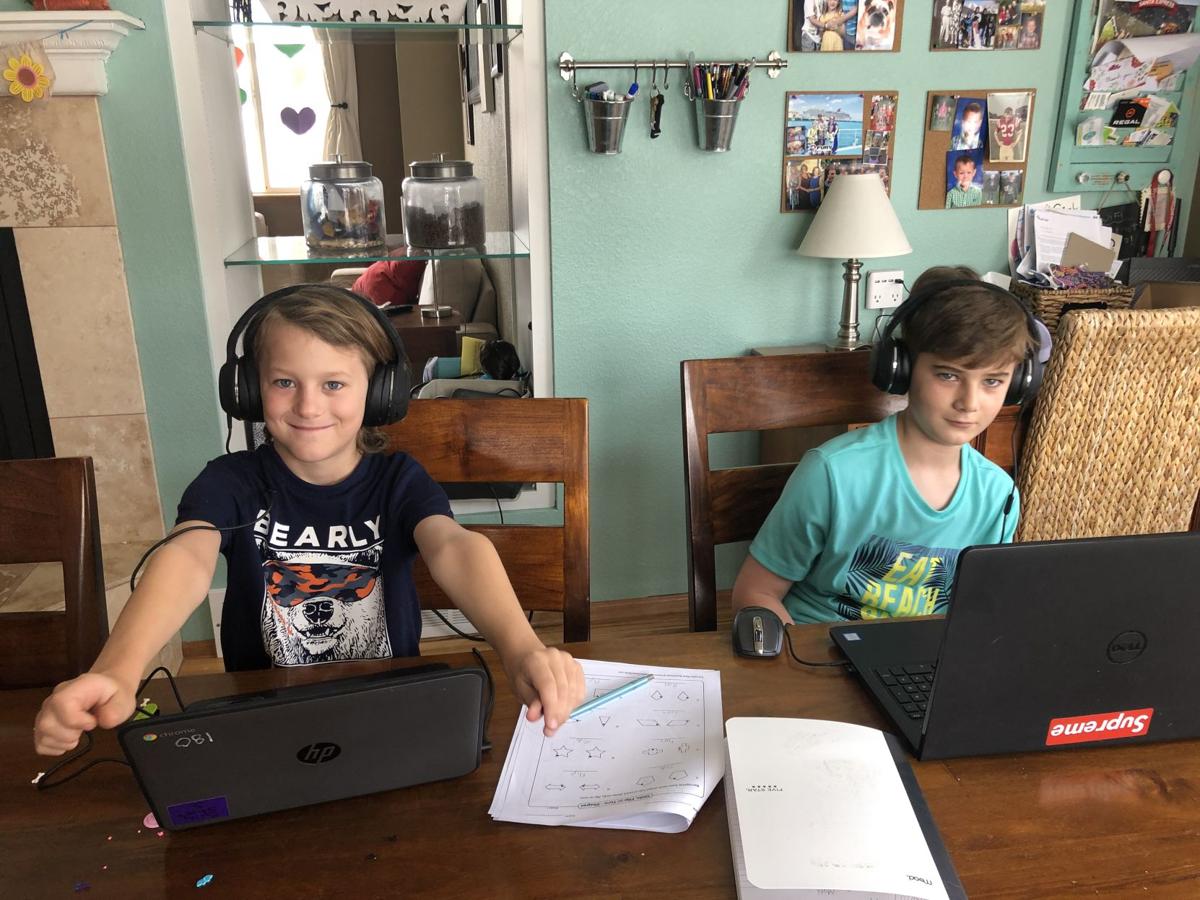 All three of Erin Street's kids attend Columbine Elementary. Pictured from left during a recent remote learning session: Sully, who's in third grade; and Max, a fifth-grader. 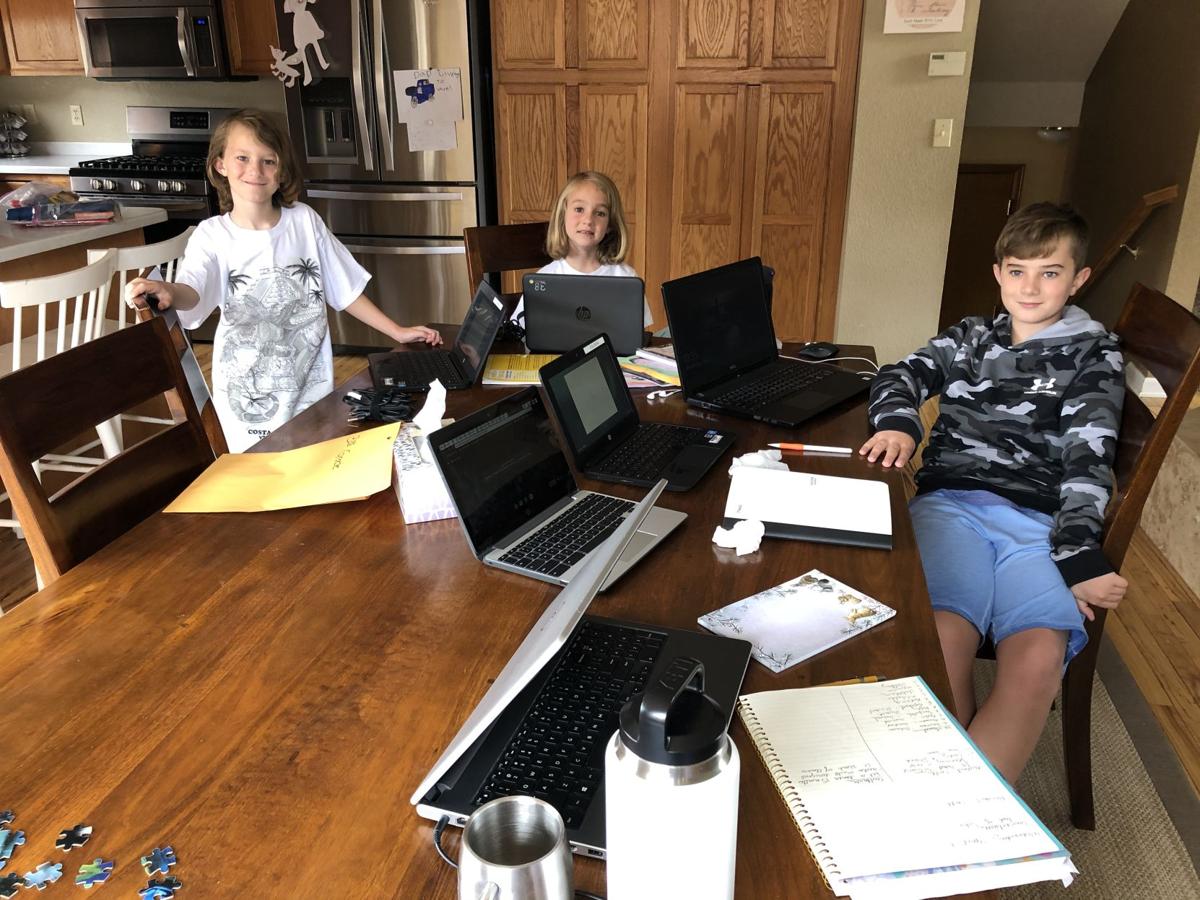 All three of Erin Street's kids attend Columbine Elementary. Pictured from left during a recent remote learning session: Sully, who's in third grade; Myra, a kindergartener; and Max, a fifth-grader. 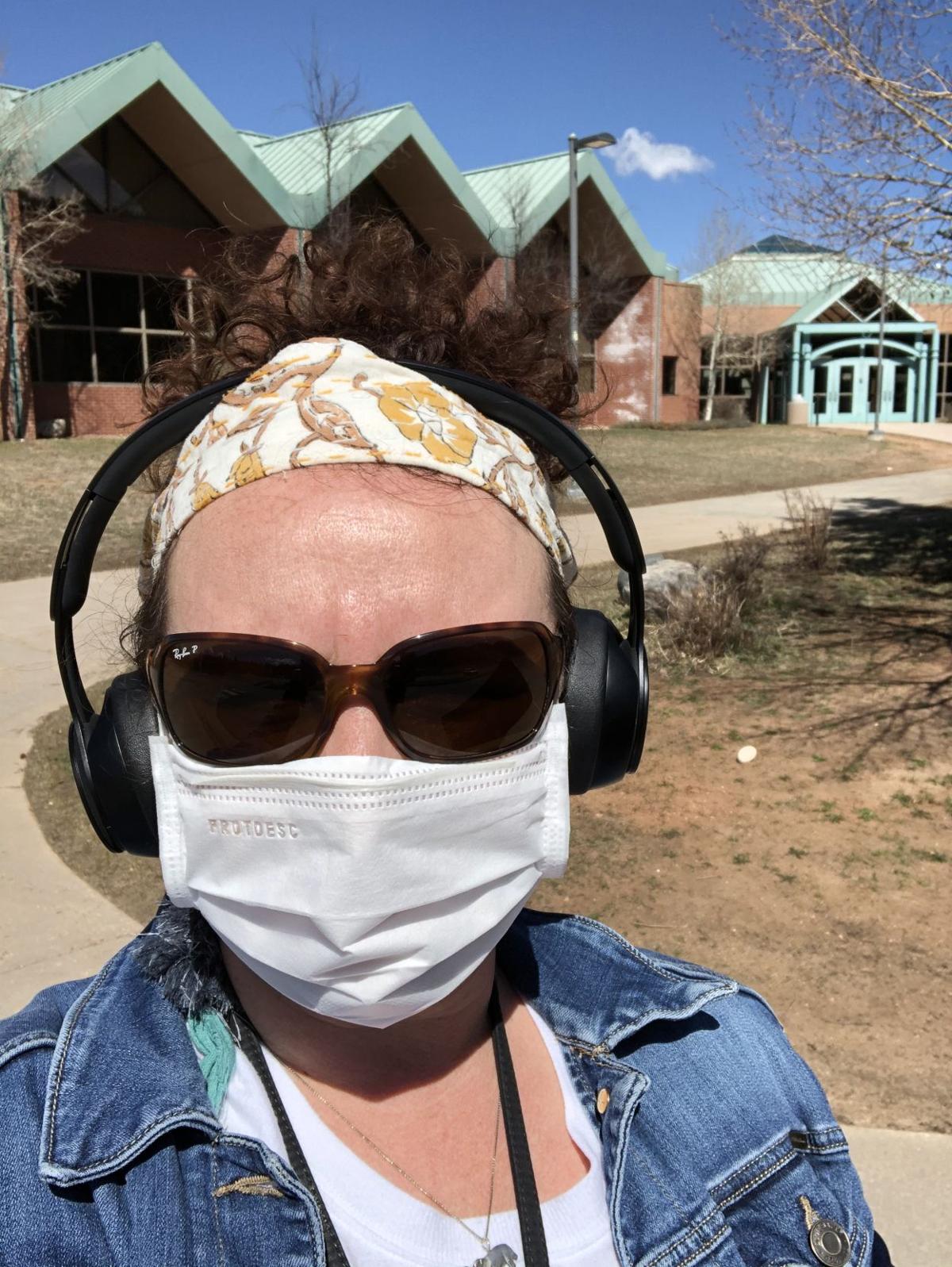 All three of Erin Street's kids attend Columbine Elementary. Pictured from left during a recent remote learning session: Sully, who's in third grade; and Max, a fifth-grader.

All three of Erin Street's kids attend Columbine Elementary. Pictured from left during a recent remote learning session: Sully, who's in third grade; Myra, a kindergartener; and Max, a fifth-grader.

Transitioning to remote learning while schools have been shuttered due to COVID-19 has been a fairly pain-free process throughout Woodland Park School District — thanks in part to having laptops ready for students and a process for feedback already in place.

Principals at the district’s elementary, middle school and high schools shared how the out-of-classroom learning experience has been going.

“We started March 31 with live lessons and things have been going great. We all are finding ways to keep connected to school,” said Ashley Lawson, principal of Gateway Elementary — one of three elementary schools in the district.

A typical school day for a K-5 student includes three 15-20 minute live lessons on academic subjects in rotation as well as physical education and art. “Each teacher built their own schedule. The lessons could be spaced throughout the day with breaks for lunch and outdoor time. We wanted to give the kids time to go out and be kids,” Lawson said.

May 21 will be the last day of remote learning “school” for students. May 22 is the last day for staff, who will be working over the summer with WPSD Superintendent Steve Woolf on plans for the fall, which depend on whether state government allows reopening or opts to continue remote learning.

Lawson noted that Gateway has a 1:1 ratio of Chromebook per student, K-5, and sent the computers home with students prior to the district’s spring break. For the 10-15 students who cannot get internet service at home, despite WPSD setting up several temporary mobile internet hotspots in the area, teachers prepare lesson packets that are delivered to those families along with grab-and-go lunches, she said.

Gateway teachers use Google Classroom — a free web service that allows for easy file sharing — as a primary tool to host lessons, Monday through Friday.

Fourth and fifth-grade students were already familiar with using Google Classroom via the district’s Summit Learning platform, which incorporates one-on-one weekly “check-ins” between teacher and student.

“The kids didn’t have to learn it (Google Classroom), but we did have to do some teaching with the parents,” Lawson said.

Lawson said she regularly emails surveys to parents to see how the process is going for them. “The feedback from parents has been great. I just want to praise our parents; they have been awesome in supporting us.”

Erin Street, assistant principal at Woodland Park Middle School, said in an interview posted on the Summit Learning platform blog last week, “The transition to remote learning has been much easier for our students and teachers because we have been using Summit Learning’s mentoring approach to foster strong relationships and personal connections.”

She told The Courier, “Summit Learning is where our curriculum lives. We added the Google Classroom piece as a communication launchpad.”

The middle school also has a 1:1 ratio of Chromebook/student, and the school’s roughly 450 students were already familiar with academic mentoring via one-on-one weekly check-in meetings with teachers.

“Overall we’ve been doing really well,” Street said. “I really am proud of our kids and am thankful and have a lot of gratitude for our parents.”

With regular feedback from parents via daily emailed surveys sent to each family, the teachers have made some adjustments to the remote-learning process along the way.

“For example, each live classroom has an invite (link), and in the beginning, the teachers were putting them in all different places. Some people said they were hard to find, so we made one place to post those,” Street said. “We knew we were not going to be perfect at this (remote learning) going into it, and that we can make changes as we go along.”

The school’s counseling staff has been reaching out to families at home and supporting them virtually as well, Street said.

She added, “I have just been overwhelmed by the kindness and support we’ve been receiving from our families. We’re all in this together.”

Woodland Park High School Principal Kevin Burr said the remote learning process has been going “surprisingly very, very well.” He credits the success to the Summit Learning platform and the groundwork the teachers and students had already put in before the stay-at-home order. Also, every student has a Chromebook to work on at home.

“We’ve been implementing a lot of e-learning and getting stuff in place in Google Classroom,” he said. “It was an easy transition physically and technologically. But it was a mammoth undertaking to build out the curriculum, especially for things like chemistry labs.”

Burr said he’s heard about school districts in other places of the country “telling their students they were essentially done” (with the school year) with the cancellation of in-person classes.

“We didn’t want to do that. We didn’t want to just send the kids home,” he said. “We knew we were going to do our best to make sure this was seen as a hiccup in the school year rather than just an interruption.”

The high school administration devised a temporary mission statement, posted on its web page under “A Message from the Principal”:

We keep moving academically as if we were in school. We teach and learn according to the standards already in place. We don’t lower expectations. We adjust the method of instruction. We expand the methods of demonstrating learning.

Burr said initially was some understandable frustration amongst parents and students transitioning to remote learning. “It’s like the old adage about changing horses in mid-stream. But the feedback we’re getting overall has been positive.

“I think the mothers and fathers have a newfound respect for teachers and how hard they work day in and day out. I also think they’re very proud of Woodland Park High School, that we came up with a plan.”

For the 150-or-so-member WPHS senior class, graduation plans are underway, he said. Prom had to be canceled due to the pandemic.

Student participation in remote learning has been high at all the district’s schools, the principals said. A remote-learning summer school opportunity is planned.

In the battle to maintain education in the time of the coronavirus, the Cripple Creek-Victor School District has unleashed an army of soldiers.