The Daniels Pass network spans about 6 1/2 miles, including a singletrack loop in a forested, little-known swath of the canyon and a new route to Mount Muscoco, the park’s highest point.

The spine of the new system is the realigned Daniels Pass Trail. The steep, downhill descent historically known by mountain bikers has been remade in a gentler, switchbacking way to cater to people on foot and wheels. The 2-mile trail tops out at a ridge, where travelers can take the short, hiker-only path to Muscoco, or drop into the trees for 3-plus miles of Sweetwater Canyon trails.

David Deitemeyer, the city’s senior landscape architect, oversaw construction by FlowRide Concepts. He said he’s heard the network described as “a game changer in adding some significant loops and connections.”

The goal, Deitemeyer said, “was to have a trail system that appeals to the majority of park visitors.” 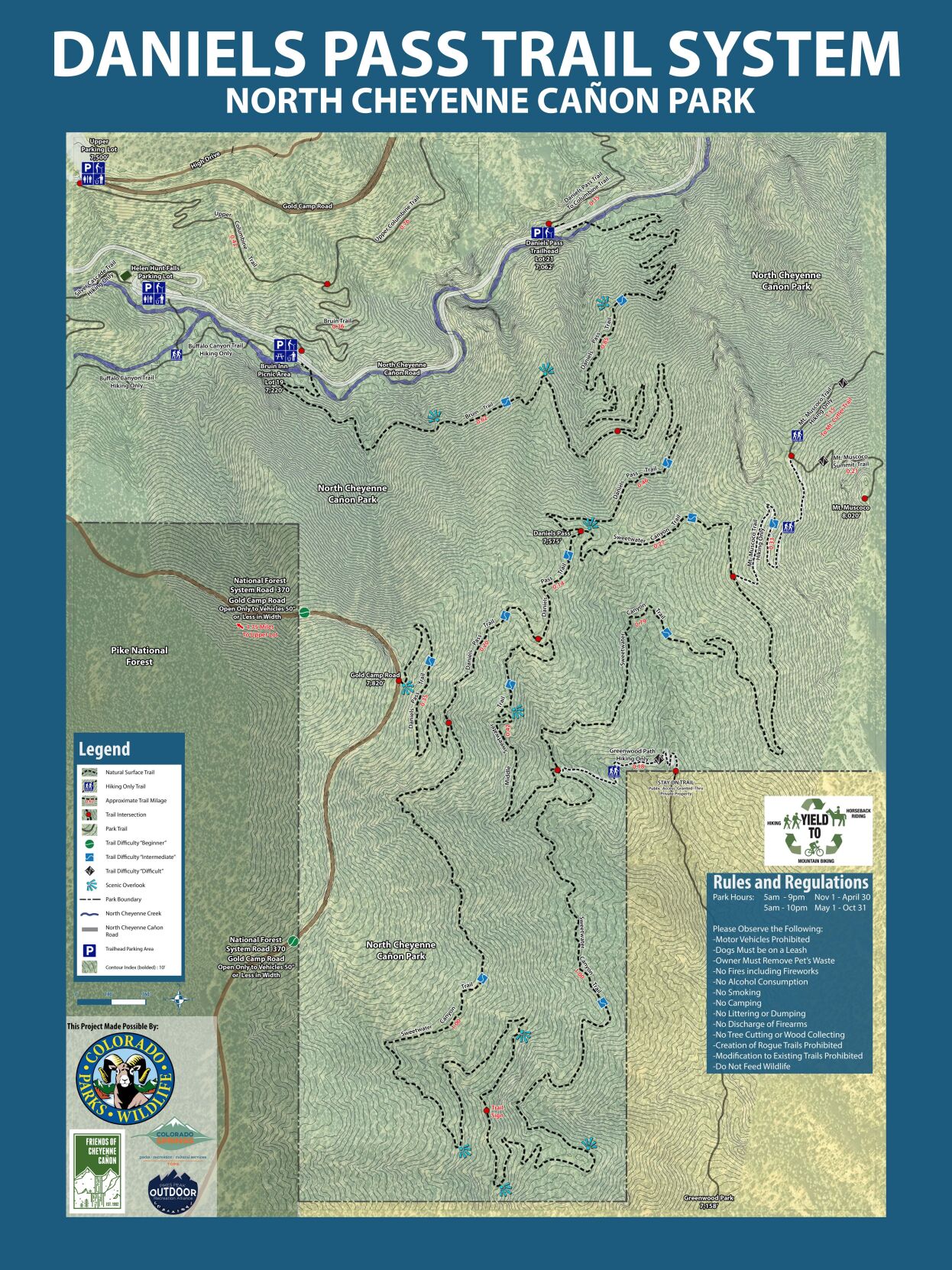 For now, while the park’s main road is closed for extensive construction, the system is reserved for those willing and able to venture to it.

For hikers and runners, Friends of North Cheyenne Cañon President Calla Balliett recommended taking lower Columbine to the Mount Cutler/Muscoco trailhead and coming down Muscoco’s new connector with Daniels Pass. That amounts to more than a 10-mile round trip — not counting a detour into Sweetwater Canyon.

“It’s quite beautiful back there,” Balliett said. “You really feel like you’re out there.”

As Cory Sutela put it, the executive director with mountain biking group Medicine Wheel Trail Advocates: “It feels like a special and different place to be.”

This is the 200 acres the city received in the controversial 2016 land exchange with The Broadmoor.

Sutela suspected “new trails are not going to appease” all critics of that move. “But if you take a step back, I mean, 6 1/2 miles of new trails, it’s a huge addition. I really hope some of those opponents can say, Well, at least there was some good that came from it.”

Sutela also suspected “pure downhill” riders of the former Daniels Pass would miss the old thrill. He called Sweetwater trails “more flowy” with “some compelling tech features” like rocks and jumps. He classified the system as intermediate to advanced — an extension of the cross-country experience riders have come to cherish in the canyon.

“I’d say it’s for any rider that really appreciates that experience of being close to the city but being in a completely wild area,” Sutela said.

Sweetwater Canyon “is a little bit more of a remote part of the park,” Balliett said. She expected it to help spread out crowds in the tight, narrow park, adding: “I think it’ll help alleviate some of that (parking and traffic) congestion.”

Once open to drivers, Daniels Pass trailhead will include 12 parking spots. Fifteen more have been added at the Bruin Inn picnic area — another connection point with a new half-mile trail.

To Sutela, the trail system represented another attraction and another reason to take a closer look at traffic control concepts listed in the park’s 2018 master plan. Sutela likes the shuttle idea.

“We may look at those (ideas) in the future,” Deitemeyer said, “but currently no plans.”

Last winter, Florida-based Jeff Moss and a business partner found themselves at a bed and breakfast in the southern Colorado hamlet of Cuchara…