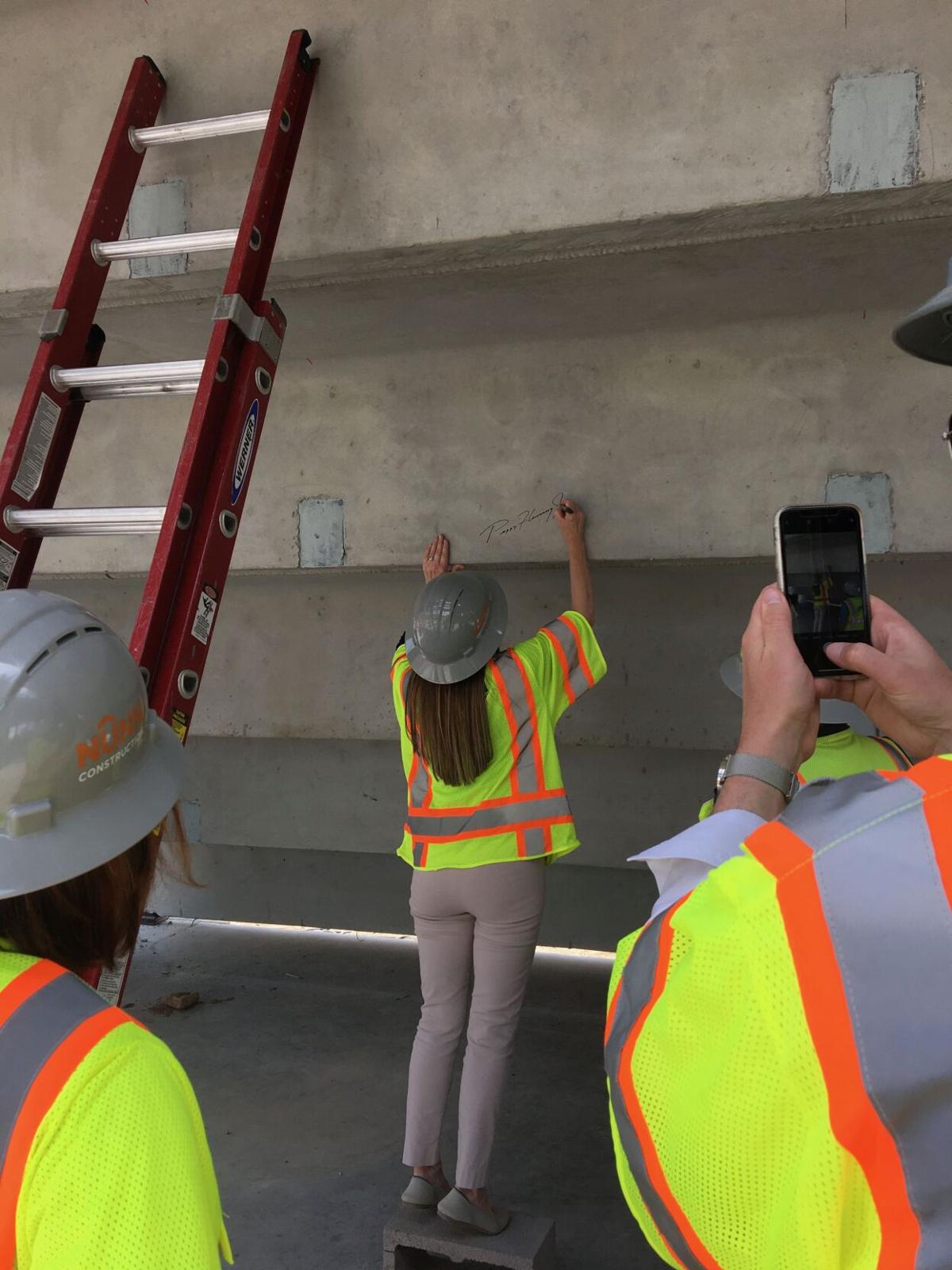 Construction workers watch as Peggy Fleming signs her name on a concrete wall at the Ed Robson Arena. 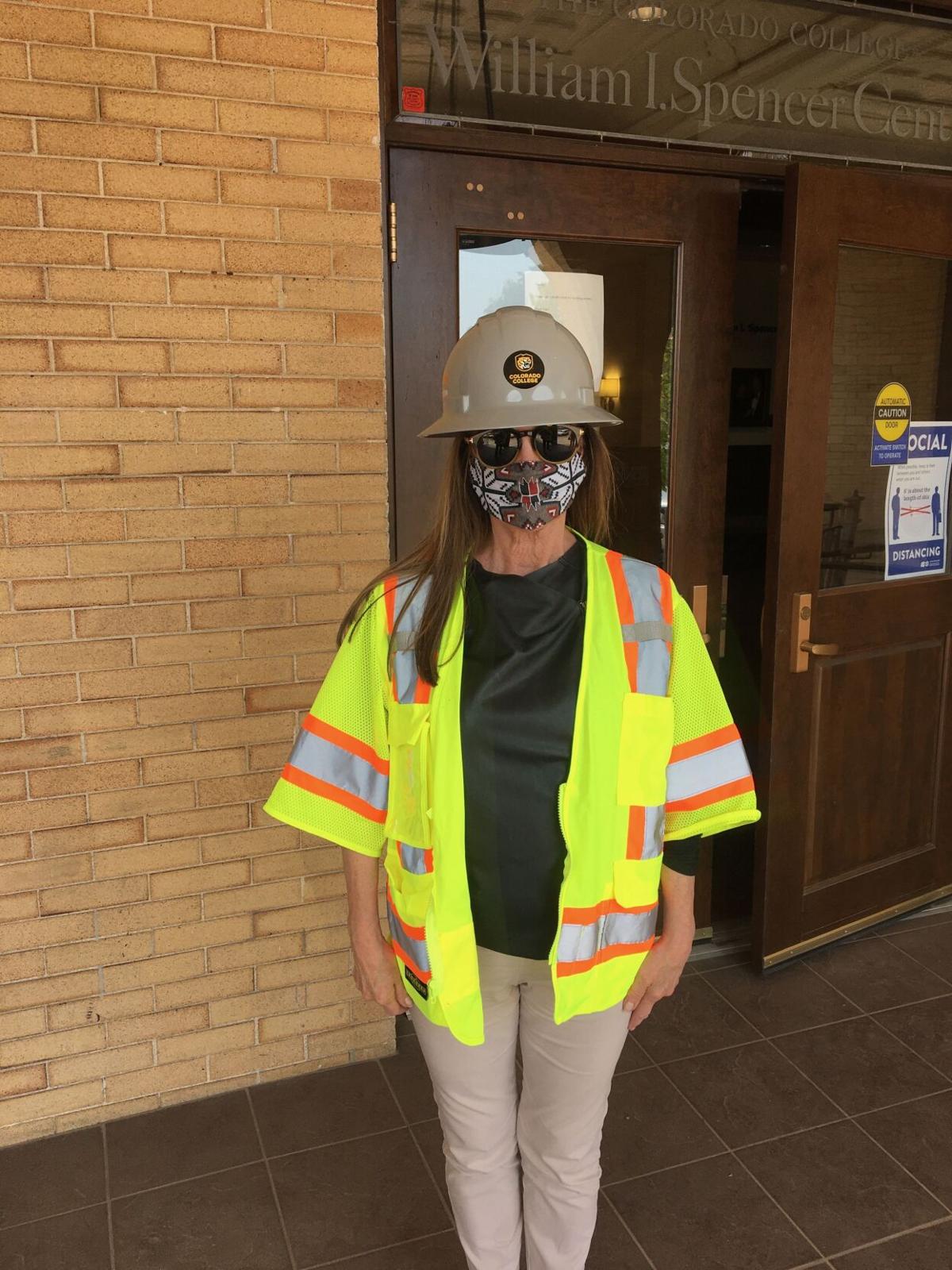 Peggy Fleming Jenkins was incognito when she took a tour of Ed Robson Arena last June. 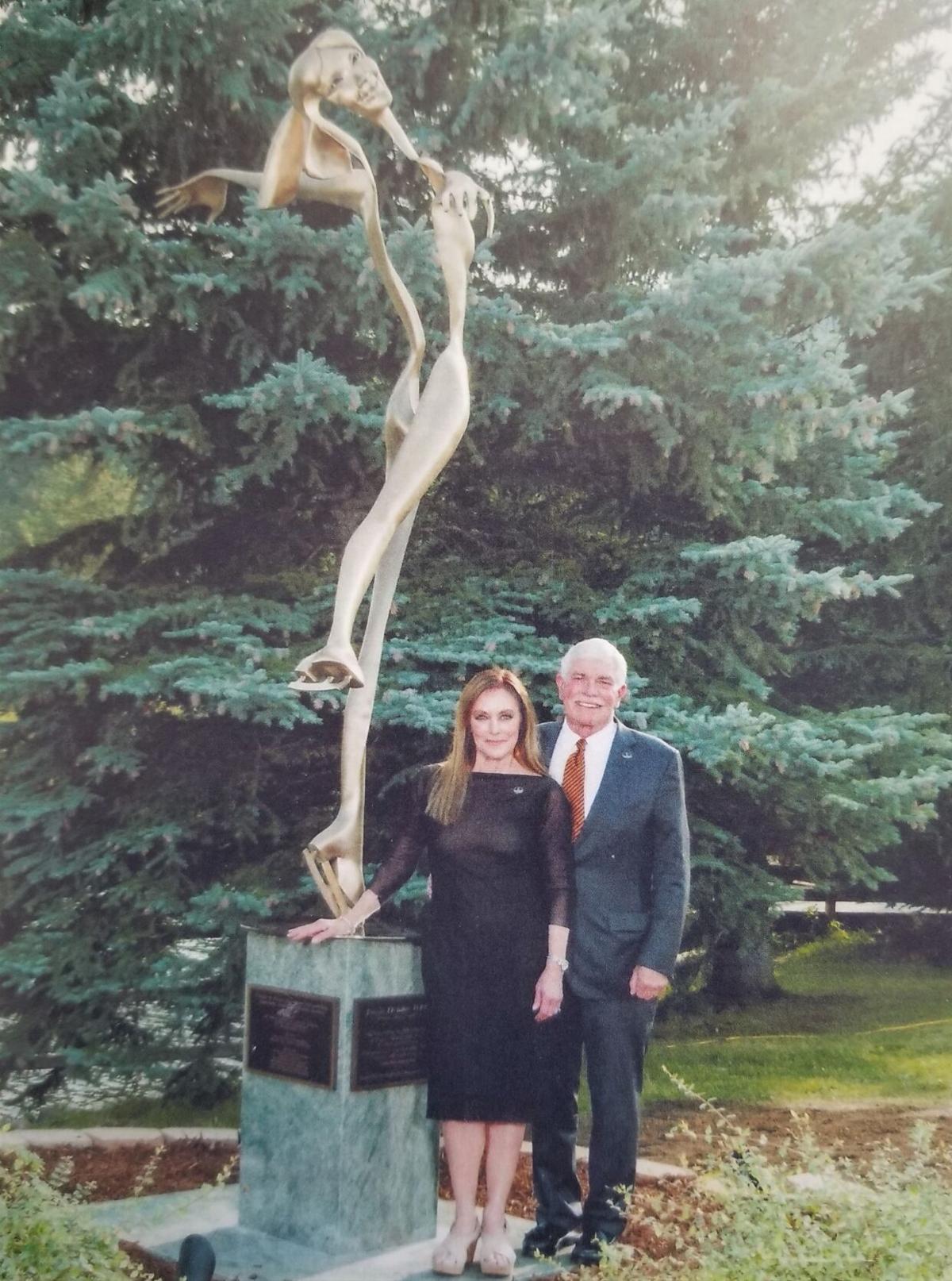 World famous women’s figure skater Peggy Fleming Jenkins and her husband, Dr. Greg Jenkins, were both students at Colorado College in the 1960s. They are generous supporters of the Jenkins Olympic Corridor, which will be part of CC’s new Ed Robson Arena. 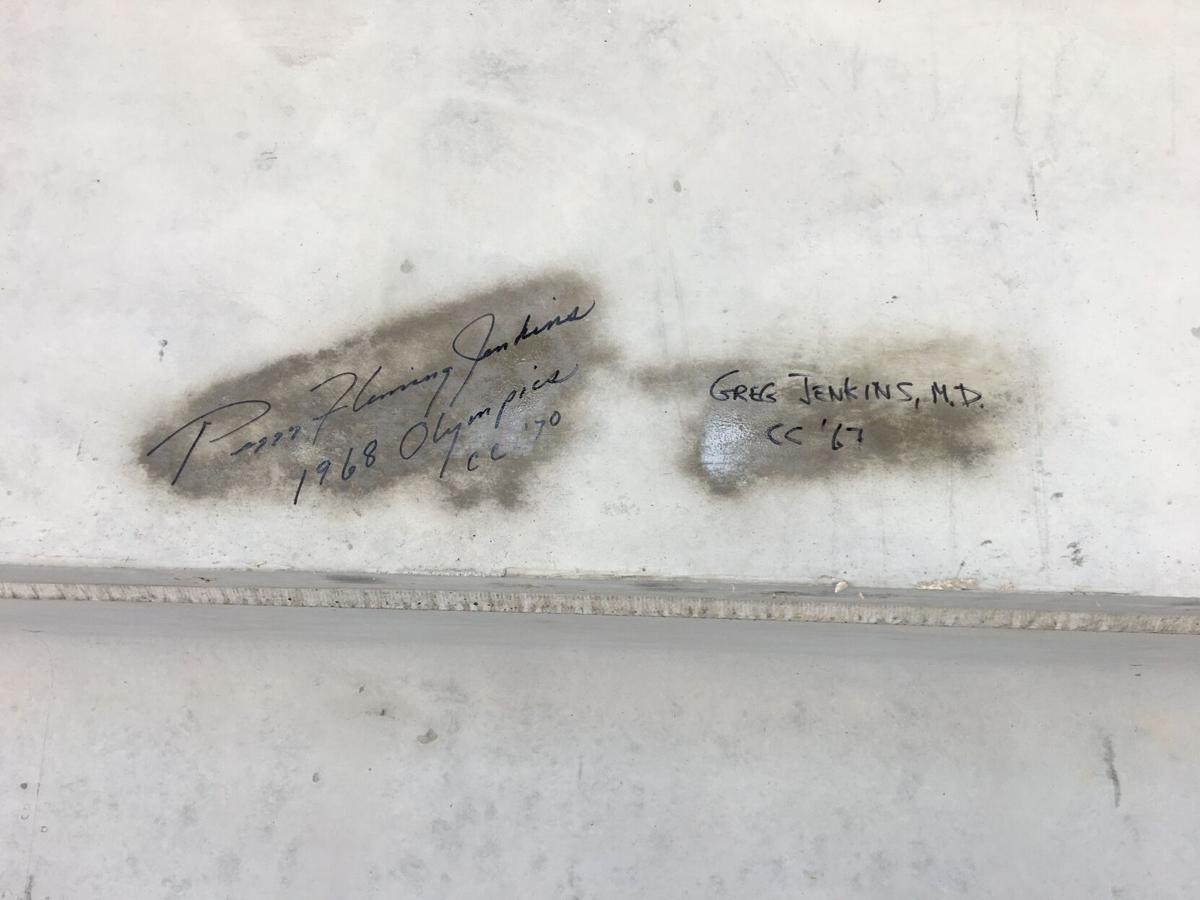 Construction workers watch as Peggy Fleming signs her name on a concrete wall at the Ed Robson Arena.

Peggy Fleming Jenkins was incognito when she took a tour of Ed Robson Arena last June.

World famous women’s figure skater Peggy Fleming Jenkins and her husband, Dr. Greg Jenkins, were both students at Colorado College in the 1960s. They are generous supporters of the Jenkins Olympic Corridor, which will be part of CC’s new Ed Robson Arena.

During a tour of Colorado College’s under-construction Ed Robson Arena in June, a masked construction worker showed up and signed her name on a wall.

It was none other than Olympic Gold medalist Peggy Fleming Jenkins, a former Colorado College and Cheyenne Mountain High School student.

Fleming was at the arena that day with her husband of 50 years, Dr. Greg Jenkins (CC class of 1967) as part of a low-key special ceremony for the ice palace that will pay homage to many Colorado College alumni who became Olympic athletes.

“The arena will be a great addition to the campus,” Peggy said. “Colorado College is written into our life story and we are happy to continue to support our alma mater through the creation of the Jenkins Olympic Corridor.”

The Jenkins’ make their home in the Denver area and are regular visitors to Colorado Springs. They help support the efforts of the United States Olympic Committee and occasionally make their way to their old college stomping grounds.

They met there in the 1960s, when Greg was a student and Peggy was training at CC’s Honnen Arena, then an outdoor facility. It was her home away from home. The old Broadmoor World Arena, located by the lake of the famous hotel, was her main training facility.

Peggy, who at the time was already the most recognized American women’s figure skater and on the verge of international stardom, blushes when she recalls how she would get extra excited when Greg would watch her skate at Honnen. “Being outdoors, the arena was great conditioning for me and it was a great place to practice,” Peggy recalled. “Greg would come watch me between studying. I would try really hard to impress him.

“I tell young female figure skaters, if you want to become a better skater, have your boyfriend come watch you practice.”

All of Peggy’s training paid off at the 1968 Winter Olympics in Grenoble, France. She was the only American to bring home the gold at those Games.

She had already won five U.S. titles and three world titles and, to this day, remains one of the most famous Olympians.

After his graduation from CC, Greg went to have a long career as a dermatologist, mostly working in northern California. He and Peggy got started in the wine business in 1999, and by 2003 they opened Fleming Jenkins Vineyard and Winery in Los Gatos, Calif. They occasionally entertained former CC classmates or hosted CC-related events.

When Peggy and Greg moved to the Denver area in 2017 to be closer to their grandchildren, they became even more involved with CC. “We asked them, ‘What can we do now that is impactful and meaningful,’” Greg said. “When the topic of new Ed Robson Arena was brought up and how we can be involved, that perked our ears.”

Greg and Peggy became generous supporters of the Jenkins Olympic Corridor that will be a main feature of the arena. It will open next year and is named in honor of Ed Robson, a 1954 graduate of CC and former CC hockey player. It will be the first on-campus home for the CC Tigers hockey team.

The 3,407-seat multiuse arena is part of the Colorado Springs’ City for Champions initiative. It will also host community events, offer public skating and more.

“We have wonderful memories of being at Colorado College,” Peggy said. “It was a natural thing for us to support the school in this way now.”

Greg, a former competitive skater, is thrilled that the corridor will be an inclusive space and hopefully be an inspiration for all visitors. “We believe the corridor will inspire everyone who walks by — whether student, faculty, administrator, parent, or other CC supporter,” he said.

Peggy and Greg also support CC’s collegiate figure skating team. In 2017, Peggy was one of several distinguished alumni for whom residences in CC’s East Campus Housing Community were named. The Fleming House provides living space for 16 students. The following spring, she was awarded a Doctor of Humane Letters during commencement ceremonies at CC.

“Both of those were real surprises,” Peggy said. “It was an extreme honor. It was really cool. I even got to walk in commencement.”