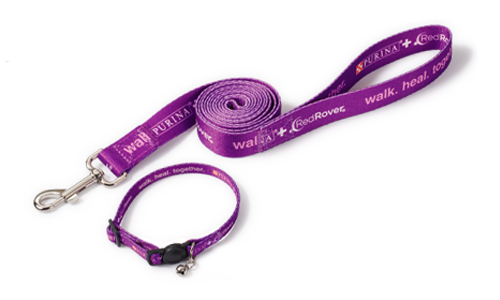 Pets are family. And when there’s a family dispute, they can get caught in the crossfire.

I hadn’t heard of the Purple Leash Project before I became a dog owner a couple of years ago. It’s a project spearheaded by pet-food maker Purina to help domestic violence victims and their pets escape violence at home.

With one of October’s designations being Domestic Violence Awareness Month, I thought the Purple Leash Project would be a timely part of that greater subject to highlight here.

The goal of the Purple Leash Project, created by Purina and RedRover in 2019, is to “help ensure that at least 25 percent of U.S. domestic violence shelters offer pet-friendly survivor services by the end of 2025,” states Purina.com.

The project was so-named because during the month of October, a purple ribbon is used to show support of domestic violence victims and survivors. “The purple leash serves as a visible symbol of the invisible struggle domestic violence victims and their pets endure, as well as the unbreakable bond between pets and their owners,” the website states.

One in three women and one in four men have experienced some form of physical violence by a partner. This includes behaviors such as slapping, shoving, pushing — and in some cases might not be considered “domestic violence,” states the National Coalition Against Domestic Violence on its website, ncadv.org.

But only 15% of domestic violence shelters accept pets.

“In addition, over 70 percent of women in domestic violence shelters report their abuser threatened, injured or killed a pet as a means of control. As a result, nearly half (48%) of domestic abuse victims delay leaving because they can’t take their pet with them,” states purina.com.

Visit RedRover’s resource directory for survivors and advocates that lists pet-friendly programs across the U.S. and Canada: SafePlaceForPets.org.

It makes sense that victims of domestic abuse would find it harder to escape an abusive situation if they had to leave a pet behind.

Finding a way to leave a bad living situation has become even more difficult during the COVID-19 pandemic.

“The pandemic, like other kinds of disasters, exacerbates the social and livelihood stresses and circumstances that we know lead to intimate partner violence,” said Clare Cannon, assistant professor of social and environmental justice at UC-Davis.

In an article published on the university’s website in February, Cannon said “increased social isolation during COVID-19 has created an environment where victims and aggressors, or potential aggressors in a relationship, cannot easily separate themselves from each other. The extra stress also can cause mental health issues, increasing individuals’ perceived stress and reactions to stress through violence and other means.”

Cannon added, “Compounding these stressors, those fleeing abuse may not have a place to get away from abusive partners.”

Editor of this publication and the other three Pikes Peak Newspapers weeklies, Michelle Karas has called the Pikes Peak region home for six years. Contact her at michelle.karas@ pikespeaknewspapers.com.