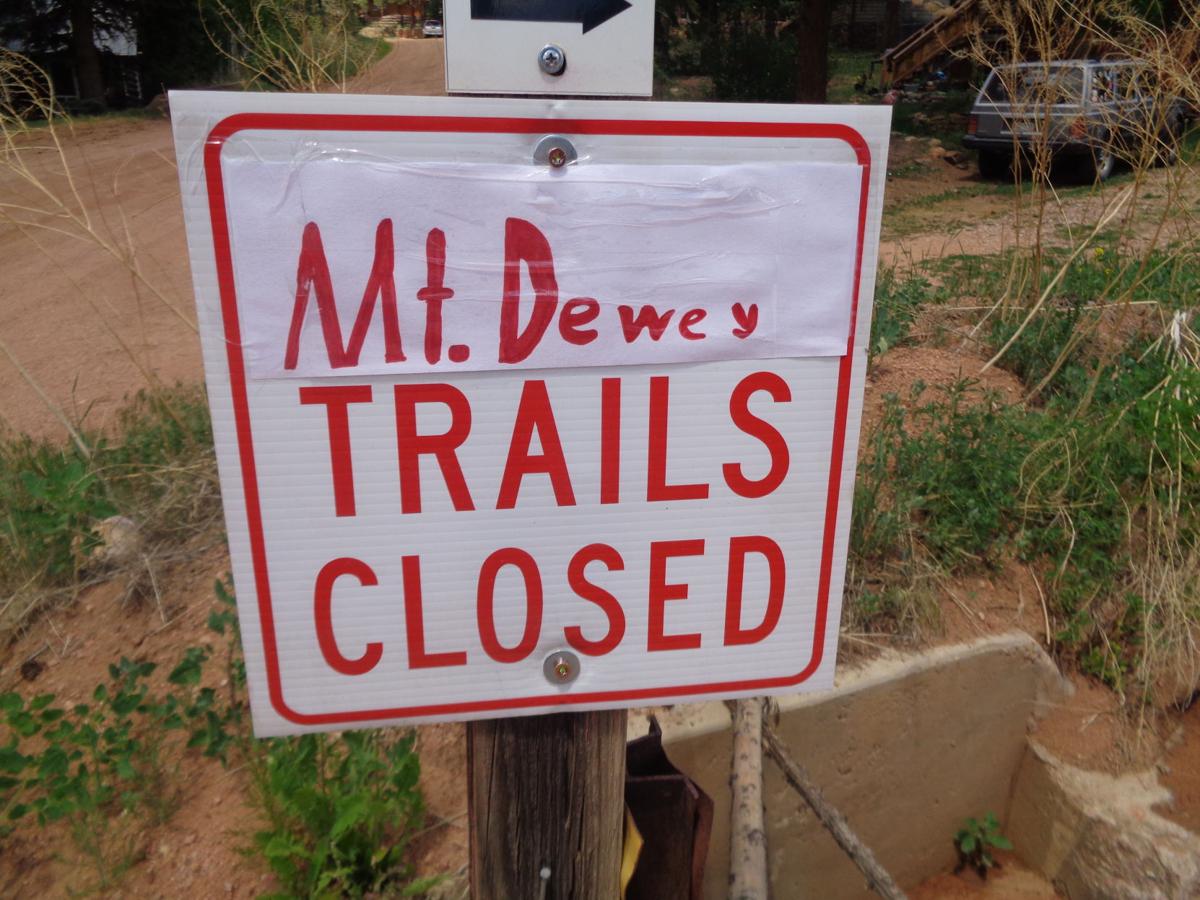 The Green Mountain Falls Board of Trustees voted last month to close the Mt. Dewey Trail and two side trails. 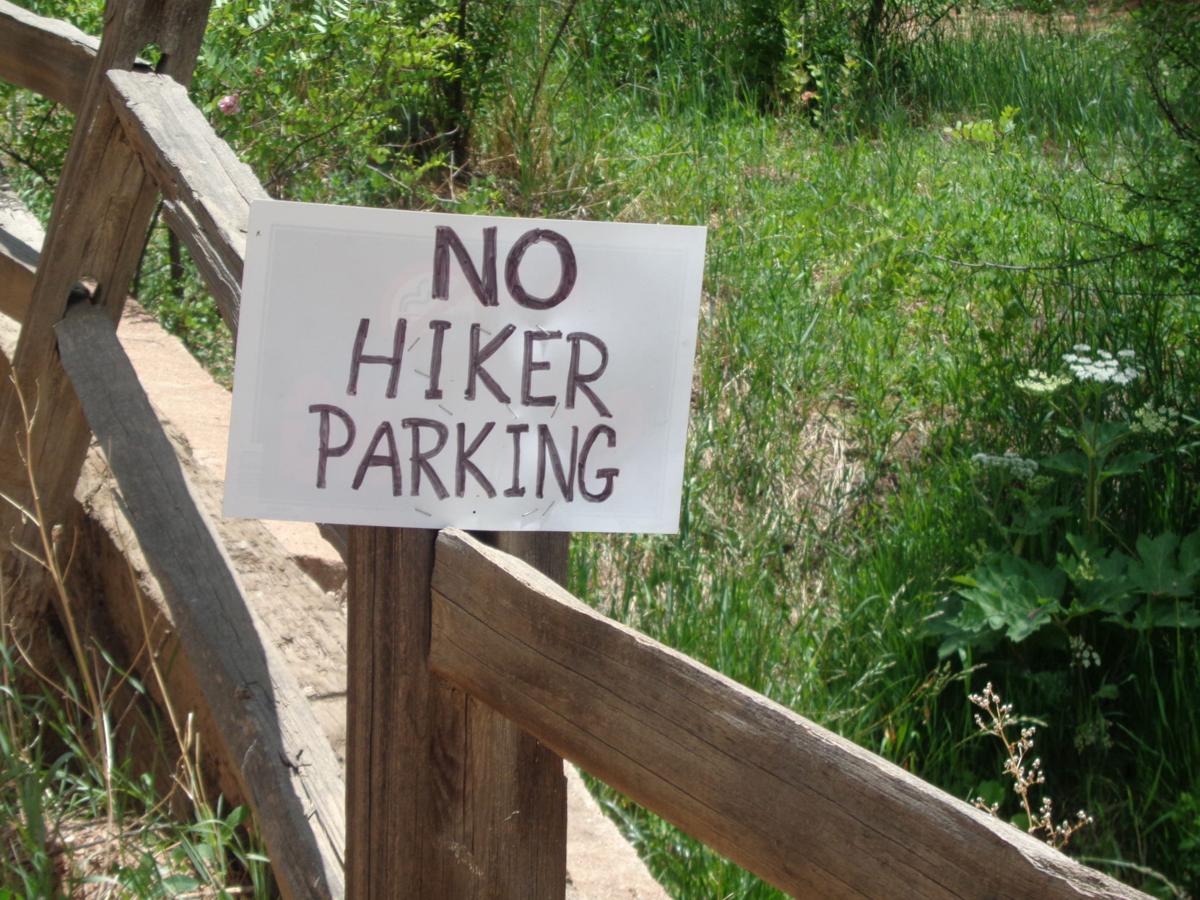 Signs like this one are a frequent sight near trails in Green Mountain Falls.

The Green Mountain Falls Board of Trustees voted last month to close the Mt. Dewey Trail and two side trails.

Signs like this one are a frequent sight near trails in Green Mountain Falls.

The Green Mountain Falls Board of Trustees has voted unanimously to temporarily close the Mt. Dewey Trail, a popular hiking spot.

The vote came after a resident, Clay Gafford, threatened to sue the town. At issue is the increasing number of hikers on the trail that crosses Gafford’s property near the summit.

“There’s no enforcement at all right now,” Gafford said at the Board of Trustees’ June 16 meeting, held via the Zoom platform. “So that’s when I demanded they close the trails.”

The Mt. Dewey Trail also includes the Horseshoe and Bratton side trails.

“The board made the decision to temporarily close the (Mt. Dewey) trail in order for the town manager to work with the property owners to get it resolved,” said Trustee Margaret Peterson. “I know we’re all hopeful that it can open back up soon.”

Gafford’s beef is with the town’s 11-member trails committee, initiated and led by former mayor Dick Bratton who does the mapping for the group.

With a map and a pencil, Gafford pointed out the problem — beginning with identifying his 62-acre property near the summit. “There is also this connector trail that Bratton built,” Gafford said, showing how the connector trail is a shortcut to the top, though his property. “I’ve told Bratton for years that this is private property but he never once came to us.”

As well, the entire summit of Mt. Dewey is private property, Gafford said.

The trails committee is supposed to be advisory to the board of trustees, Gafford said. “We don’t need more trails. We need to manage the trails we’ve got and start charging for them. But the committee goes off building trails that the town doesn’t want.”

Mayor Jane Newberry acknowledged that the board wasn’t aware of the issue. “Our first reaction and, I think it was the correct one, was to immediately shut that trail until we come to a resolution, even though it’s between two homeowners,” Newberry said. “Because it’s a Green Mountain Falls’ trail we had to step in.”

When it comes to building trails, the town can’t encroach on private property, she said. “It’s important that we get this right so that trails are in the proper place.”

However, if the property owner, in this case the Historic Green Mountain Falls Foundation, gives permission to the trails committee to build on their property, that’s fine, Newberry said. “There are actually three or four property owners all over Mt. Dewey,” she said.

The trail in question is supposed to be solely on property owned by the foundation, Newberry said. “Our hope is that if it’s a built trail we can get that corrected right away because it doesn’t help all the hikers to have the trails closed,” she said.

Asked for a comment, Rocoo Blasi, trails committee chair/trail builder, responded: “It’s unfortunate that the Mt. Dewey Trail was closed in this manner, but the Town is working with the landowners to resolve the issue,” he said. “The GMF Trails Committee stands ready to support this process and hopes the trail reopens soon.”

Mac Pitrone lives near the Mt. Dewey trailhead on Myrtle Street. “I believe the closure is long overdue,” he said. “I believe the town was pressured by the trails committee to build the trails. And the area is prone to wildfire. People smoke up there and leave trash.”

Yet Gafford feels he is up against long odds of a solution with legal recourse. “I don’t want to sue the town; nobody wins and it costs everybody money,” Gafford said. “I don’t want to, but what else can you do? I’ve complained for years but nothing has been done.”

The board plans to discuss the issue at its July 7 meeting, to be held at 7 p.m. via Zoom.

The Colorado Department of Public Health & Environment has issued new guidelines for personal and outdoor recreation that includes gyms, p…