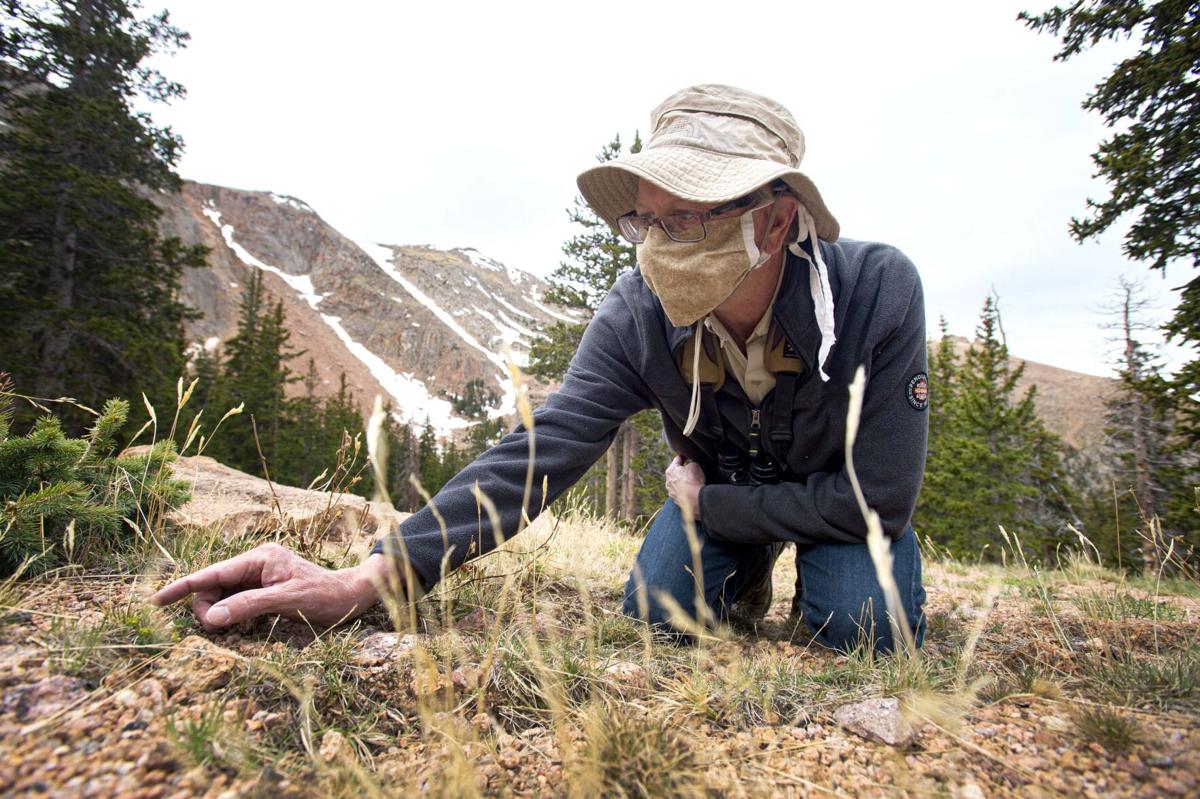 U.S. Forest Service botanist Steve Olson gets on his knees to explore the flora growing above Glenn Cove on Tuesday, June 2, 2020. 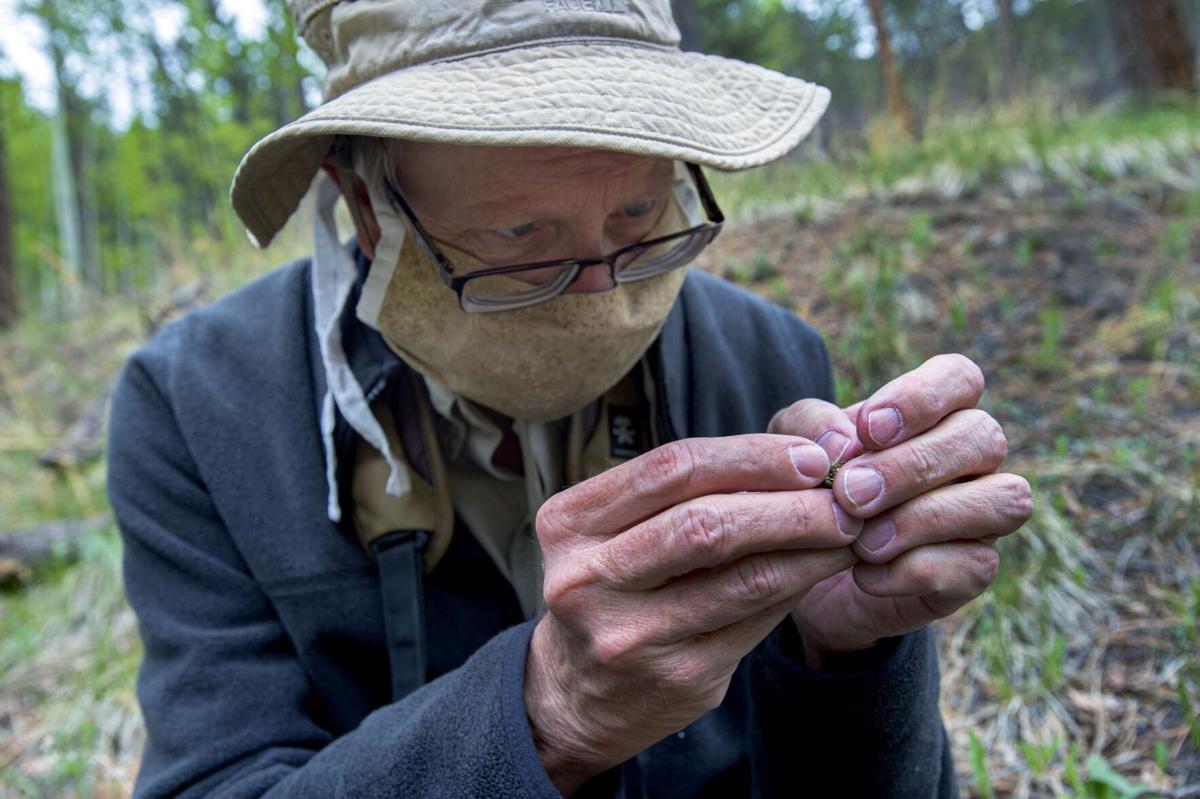 U.S. Forest Service botanist Steve Olson looks at lichen he found on Pikes Peak on Tuesday, June 2, 2020. Olson is the lone botanist for the Pike and San Isabel national forests and Cimarron and Comanche grasslands. 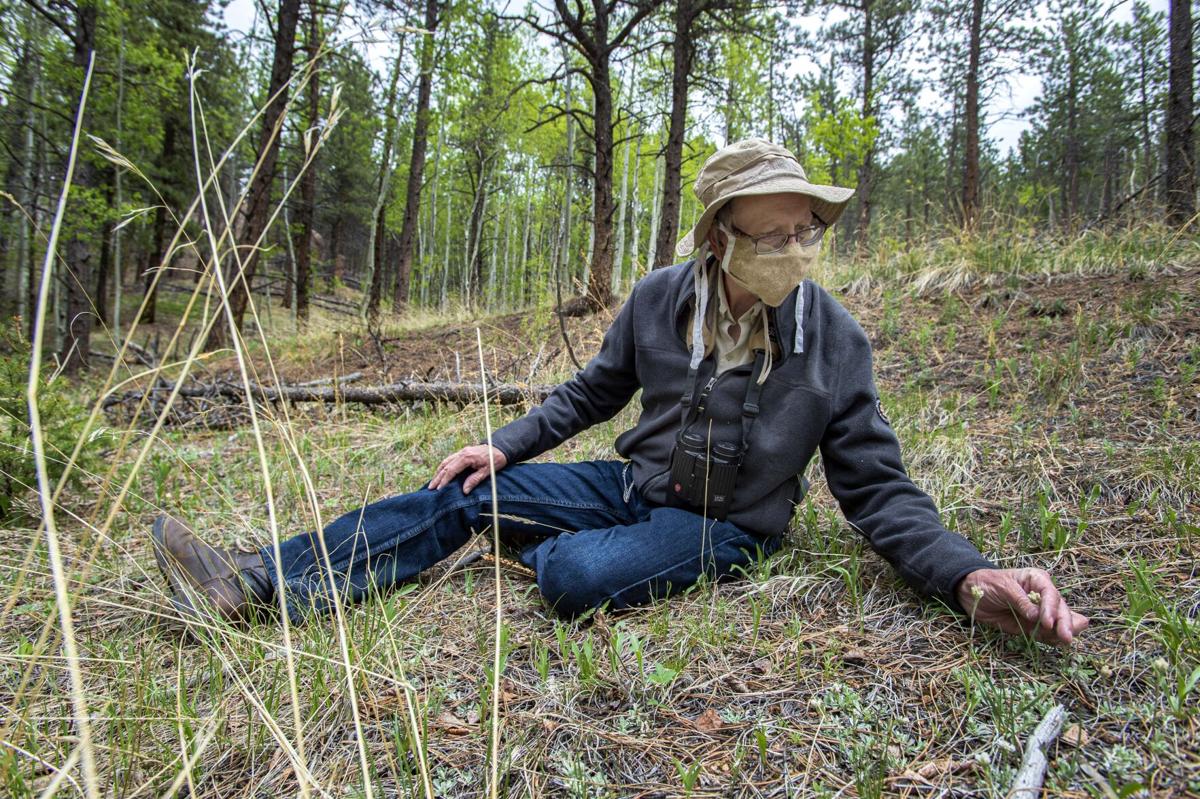 Steve Olson, botanist for the U.S. Forest Service in Pueblo, reaches for a pussytoe flower along the Pikes Peak Highway on Tuesday, June 2, 2020 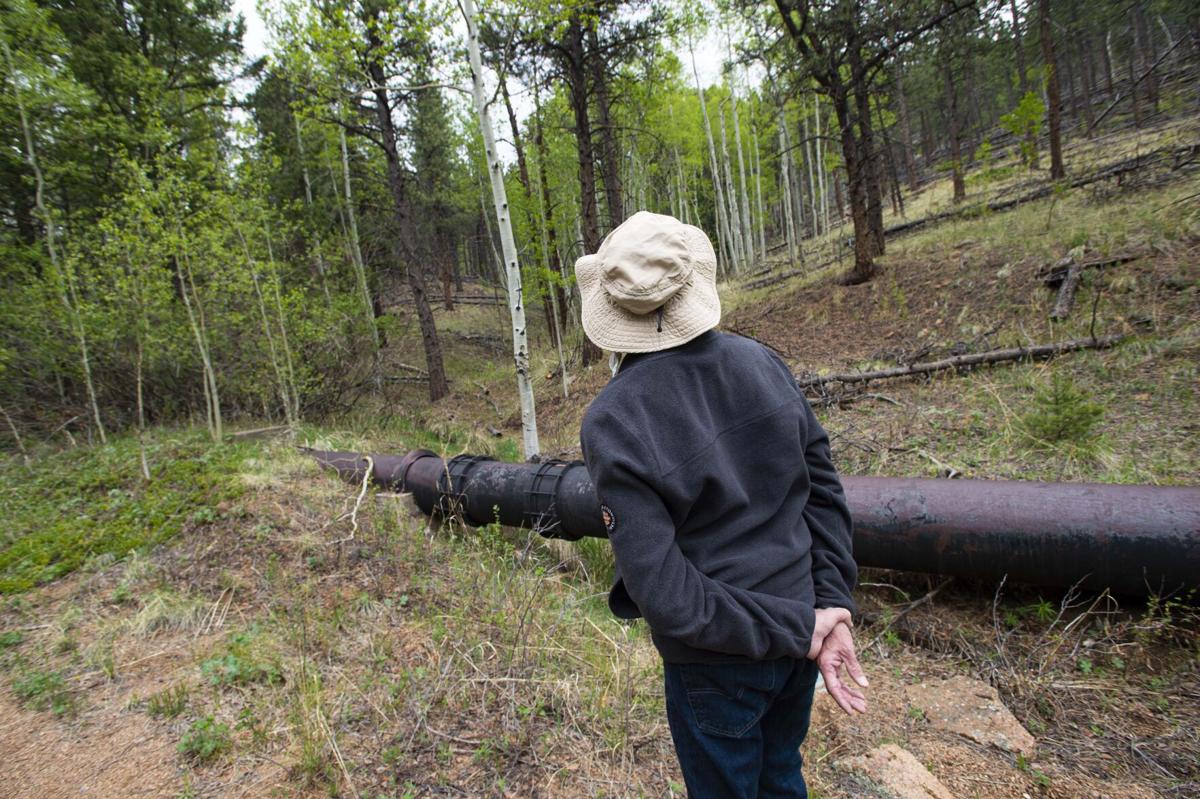 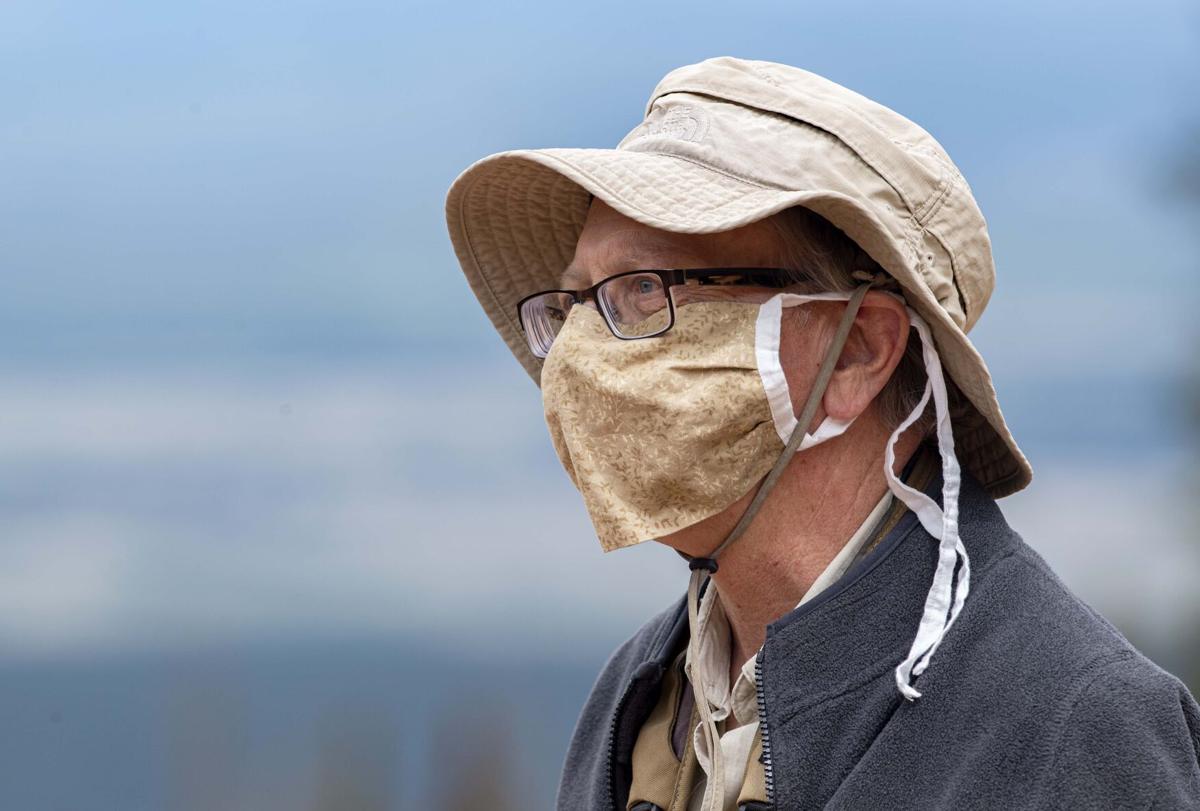 U.S. Forest Service botanist Steve Olson gets on his knees to explore the flora growing above Glenn Cove on Tuesday, June 2, 2020.

U.S. Forest Service botanist Steve Olson looks at lichen he found on Pikes Peak on Tuesday, June 2, 2020. Olson is the lone botanist for the Pike and San Isabel national forests and Cimarron and Comanche grasslands.

Steve Olson, botanist for the U.S. Forest Service in Pueblo, reaches for a pussytoe flower along the Pikes Peak Highway on Tuesday, June 2, 2020

Steve Olson stops along the Pikes Peak Highway and enters a spruce forest to see what he can find.

“Let’s see what this is,” he says, crossing his long, skinny legs and folding downward to the ground.

His arms are gangly, like branches, his fingers spindly, and they gently inspect this green patch. It’s not an inch away from his glasses, which rest at the crook of his nose. He sits as if in communion, or like a kindergartner at story time.

It’s Pikes Peak parsley. One of a kind, Olson explains, found only around this summit and the neighboring slopes of Almagre. It’s something about this particular soil, Olson says, this crumbly granite.

“It’s been suspected in a few other places,” he says, “but nothing definitive.”

It would be easy to confuse. Pikes Peak parsley looks like some clump you might find in your backyard. That is if you’re someone without the analytical eye of Olson. He’s the U.S. Forest Service botanist assigned to the 3 million acres defining the Pike and San Isabel national forests and Cimarron and Comanche grasslands.

You can find Pikes Peak parsley — its scientific name is oreoxis humilis — within a database of some 2,200 other hard-to-pronounce plant names that Olson has compiled. This has been a project of his for the nearly 20 years he’s spent at his Forest Service post in Pueblo.

In the broader management of the PSICC, his duty is to protect rare life that grows from the earth. Permit renewals will reach his desk. A continued request for an overhead power line, for example. Or a new permit proposing construction, or logging, or mining, or gas and oil exploration. Olson will turn to his database to see what flora might be harmed.

Here on the side of the Pikes Peak Highway, it’s easy to imagine a cement drainage — built as part of the mountain’s long history of development and commercialism — consuming ground where Pikes Peak parsley might have once sprouted. True, Olson says. Pikes Peak parsley was probably impacted.

But for as globally rare as it is, “within this place, it’s clearly not hard to find,” Olson says, “and it seems to be fairly happy.”

Here in early June, he’s pleasantly surprised to see some yellow already bursting forth, not long after snow melted from these high elevations. “It’s just getting started,” he says.

Olson, however, is wrapping up. He’s looking to retire in the coming months. He’ll leave behind that database for his successor — assuming there will one.

It’s hard to know for sure amid ongoing uncertainties with the Forest Service’s budget, which has been increasingly consumed by wildfire management. For fiscal year 2021, the agency’s proposed cuts were described as “an improvement over past years’ recommendations” by the National Association of State Foresters, “but nearly all of those proposed cuts would be made to state and private forestry programs.”

Olson has been the lone botanist assigned to the entire PSICC. He concedes those 2,200 plant entries hardly scratch the surface of the vast and varied beauty and mystery of his assigned “unit,” covering the Kansas prairie, the canyonlands of southern Colorado, the famed rivers of Chaffee and Fremont counties, the foothills of America’s Mountain and other 14,000-foot peaks spread across the Sangre de Cristo, Sawatch and Mosquito ranges.

Olson’s database “is one of those things that’ll never be complete,” he says. “Because there’s always something new showing up.”

He often roams likes this, quick to curl himself down to the ground for investigation. He brings binoculars, because he’s a bird aficionado. “But also it’s a labor-saving device,” he says. He might train the binoculars on a distant ridge and decide he need not go there.

Efficiency has been key to his job.

A permit request comes, and “the ultimate goal is to look at every single site,” Olson says. “But the reality is, for as big a place as the Pike and San Isabel and Cimarron and Comanche is, you have to find ways to do it more efficiently.”

Hence his database, which he can refer to from his desk. It was mostly built from his desk, using past research and other available online catalogs.

The project started as he had to learn about what he called “a whole new world.” That was Colorado compared to the Midwest.

He grew up in the Chicago suburbs, too “clumsy and inept” for sports, by his own description. So he gravitated to nature. First the birds in his backyard. Then, while attending Southern Illinois University, the world of plants.

It was a fragile and intricate world, he came to learn. There were layers. Understory and overstory. And everything was connected.

He eventually had enough of the swamps and flatlands. “A change of scenery was necessary,” he says.

And Colorado was that. The milkweed of the plains. The colorful cacti of the desert. Forests of ponderosa pine. Meadows of wildflowers, every color of the rainbow. Rugged cliffs and their surprising, persevering vegetation. The surprises found at every elevation range, from montane to subalpine to the extreme tundra, where flora somehow found a way.

“All kinds of good stuff here,” he says, returning to his cross-legged position on the ground.

Something grows below a rusted pipeline. “Besseya plantaginea,” Olson says, referring to the flower commonly known as cat tails. Near it is one that goes by pussytoes, for its pad shape.

Olson carefully peels back grass. “For people with sharper eyes,” he says, revealing a minuscule blossom that upon closer look appears to be a perfect, white diamond. “Rock jasmine.”

He picks a furry-feeling strand and smells a scent that recalls some cleanse. He picks sage to smell that soothing scent, too.

He moves onto a perennial, starry solomon’s seal. He admires the flower barely in bloom.

“Nothing spectacular,” he says. “Just kind of nice.”

Named after John Evans, the second governor of the territory of Colorado, Mount Evans stands tall at 14,271 feet above sea-level. It’s one of …