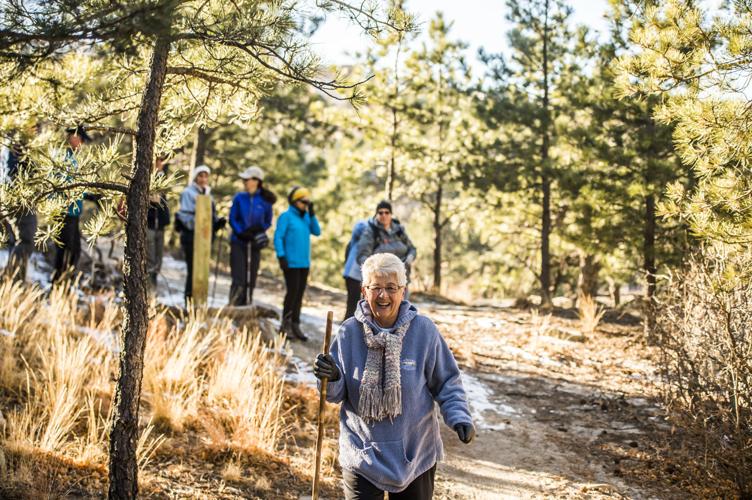 Lynette Reagan leads a group down a trail at Ute Valley Park on Saturday, January 28, 2017. The group walks together every Saturday on local trails. Photo by Stacie Scott, The Gazette 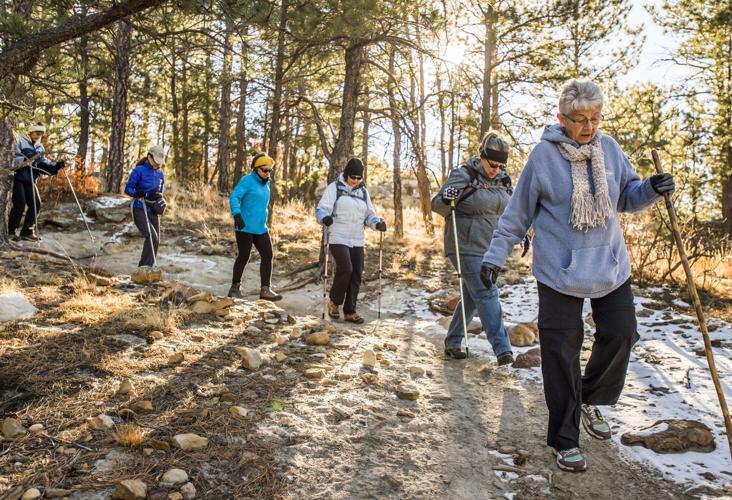 Lynette Reagan leads fellow walkers down a trail at Ute Valley Park on Jan. 28, 2017. The group walks together every Saturday on local trails.

Lynette Reagan leads a group down a trail at Ute Valley Park on Saturday, January 28, 2017. The group walks together every Saturday on local trails. Photo by Stacie Scott, The Gazette

Lynette Reagan leads fellow walkers down a trail at Ute Valley Park on Jan. 28, 2017. The group walks together every Saturday on local trails.

The library is mostly empty on a Saturday afternoon, when in a quiet room five women gather in a circle, deciding how possibly they can carry on.

They did not walk this morning. Every Saturday they had walked with others, mostly retired women like themselves, thanks to the guidance of Lynette Reagan.

Like she had for 15-plus years, she sent an email on a Wednesday, this one on June 13 to a listserv that had grown to nearly 100 people. “Hello, walkers!” she started, as she always started, the greeting alone bringing the image of her megawatt smile to some who needed it in the middle of a mean week.

That Saturday would be a breezy 3.2-mile walk out on the plains.

At the trailhead, they waited for their leader.

It was past 9 a.m. She was never tardy like this.

Later, an email came from one of the regulars.

“It saddens me to inform you of the untimely death yesterday of our beloved Lynette.”

She lay down sometime before dinner with her adoring partner, who cried over her as she would not wake. She was 75.

The next Saturday, there was a memorial walk. There were pictures shared from walks past, including one at Ute Valley Park’s rock arch, which I had not known existed until Lynette happily showed me to it once. I always wanted to walk with her again, but I never did.

Now over email, there was talk of how to continue the Saturday walks without her. Several responded by asking to be removed from the list — sorry, they were no longer interested, or sorry, but they had moved, come and gone as people do, or sorry, they were busy.

“Sorry to say that it appears no one will take up the lead of the Saturday walks.”

But Coleen Abeyta wasn’t about to let the tradition fade so fast.

A year-and-a-half ago, she saw The Gazette article about Lynette’s walks and thought they’d be good for her. She’s a widow and empty-nester, and between commutes to Denver for her job caring for the sick and elderly, she wasn’t getting out much.

She liked hiking, but she didn’t like going alone. She saw Lynette’s picture in the paper, “and I wanted to walk with that lady,” she says. “That big smile...”

Here Abeyta is in the library room with the four others, providing a rundown of to-dos. “One of them is managing the mailing list,” she says, a task that sounds overwhelming, what with all those responses lately from people asking to be removed.

Some people probably aren’t even checking it, says Colleen Kouri. “These days, they’re busy texting all the time.”

She’s new to town and wanting to see the beautiful places all around while also getting some exercise. She met Lynette just a few weeks ago and was just starting to look forward to Saturday walks.

She’s hopeful by the long trail list brought by Lois Boschee, a six-year frequenter of Lynette’s walks. Boschee says she’d be happy to lead, but she might not be the best option with all the traveling she does.

That’s the greatest need, Abeyta says: a leader. “How about we pull up hikes for the next three months and see who wants to lead?”

The room stays silent for a while. “If one of us here could organize the first one,” Abeyta says ... then nervous silence again.

She was a relative newcomer to Lynette’s group, so the incorrect distinction of “hikes” and walks is understandable. These were not “hikes,” Lynette always said.

“It’s a mindset thing, you know,” she told me, explaining how “hikes” might imply some strain, some rough terrain. On “walks,” people knew they were only in for a simple stroll and fresh air, humbling views along the way.

While it was easy to get stuck on a harsh trail in the local hills, and while the internet was quick to recommend those trails for their awesome overlooks, Lynette discovered less-intimidating places.

She knew they could benefit people who might not otherwise test the outdoors. She knew people needed these places and needed the slow ease of a walk, needed the interaction and this walking escape that she needed during tough times in her life — the divorce, for one, and the loss of friends and family as time went on all too fast.

It can be hard getting older. Better to have some company along the way, Lynette figured.

And the walks were all the better, she told me, as life seemed to be getting more complicated.

Technology. Social media. Politics, which, by the way, was a topic not banned from walking discussions, nor was religion, nor was anything at all, because Lynette felt fellow walkers should be able to speak freely, especially about things that troubled them, for it was very possible to make peace in this peaceful hour.

Not everyone was always impressed by the trails, “but we came for the social part,” Boschee recalls in the library room. “Sometimes you feel crummy about what’s going on in your life, but you come together and visit with people, it makes you feel better.”

“And you’re walking in nature at the same time,” adds Janice Farish. “It just makes everything OK.”

And letting go of the walks, the women agree, would not be OK.

She’s not exactly sure of the route, not entirely comfortable, but wasn’t Lynette always fearless in the face of getting lost? So Farish offers to lead one Saturday. Boschee offers her service for the next.

For the foreseeable future, they have a plan.

One more thing, Abeyta says: “If you’re in agreement, what I’d like to propose is to keep Lynette’s name in it as a way to honor her.”