Where are they now?

Nearly three years after his discharge from the Army, Jensen, who lost part of his face to a roadside bomb, remains toothless as he faces a world of red tape so complicated that he says dreams of bureaucracy have replaced nightmares about combat.

Above: Jerrald Jensen breaks down in the garage of a Central City home last month while talking about his struggles since he was discharged from the Army nearly three years ago. Photo by Christian Murdock - The Gazette

CENTRAL CITY — “Can I get more napkins?” Jerrald Jensen asked a young waitress.

When she delivered a couple, Jensen, bedecked in a leather vest proclaiming him a wounded combat veteran, asked for more.

Nearly three years after his discharge from the Army, Jensen, who lost part of his face to a roadside bomb, remains toothless as he faces a world of red tape so complicated that he says dreams of bureaucracy have replaced nightmares about combat.

“It drives me crazy,” Jensen, a former Fort Carson soldier who served with the post’s 4th Brigade Combat Team, said recently. “I used to have patience for stupid stuff. I don’t any more.”

Retired Maj. Gen. Mark Graham, a director of the veteran peer-support program Vets4Warriors, said he hears similar tales all the time. Troubles can pile up for war veterans who, like Jensen, suffer wounds including post-traumatic stress disorder and traumatic brain injury.

“It just exacerbates the challenges they are having,” Graham said. “One more stressor is just more than they can take. They feel like they are getting hit with a fire hose.”

Replacing Jensen’s teeth means overcoming bureaucracy. He said steps to get the Army or the Department of Veterans Affairs to replace his teeth — a tough job for a man with a metal jaw — include finding a national-level expert on rebuilding a mouth without proper gums. That means special paperwork to authorize treatment outside government channels.

The Army tried and failed to give Jensen false teeth, a set of dentures that aggravated his wounds.

The Army and VA won’t comment on the specifics of Jensen’s case, including his teeth.

“You look around and they are nowhere,” he said of the support network he expected to help cut through the paperwork that stands in the way of his smile.

Jensen, wounded in a 2007 bombing, blames himself for the paperwork nightmare. He said that if he’d just gotten out of the Army after his wounds, everything would be fine.

But he stayed in, served with his unit in Afghanistan and was injured again. Jensen said that second tour also cost him his career, the respect of many of his peers and thousands of dollars in benefits after he was retired from the Army abruptly after a scandal over a failed drug test. 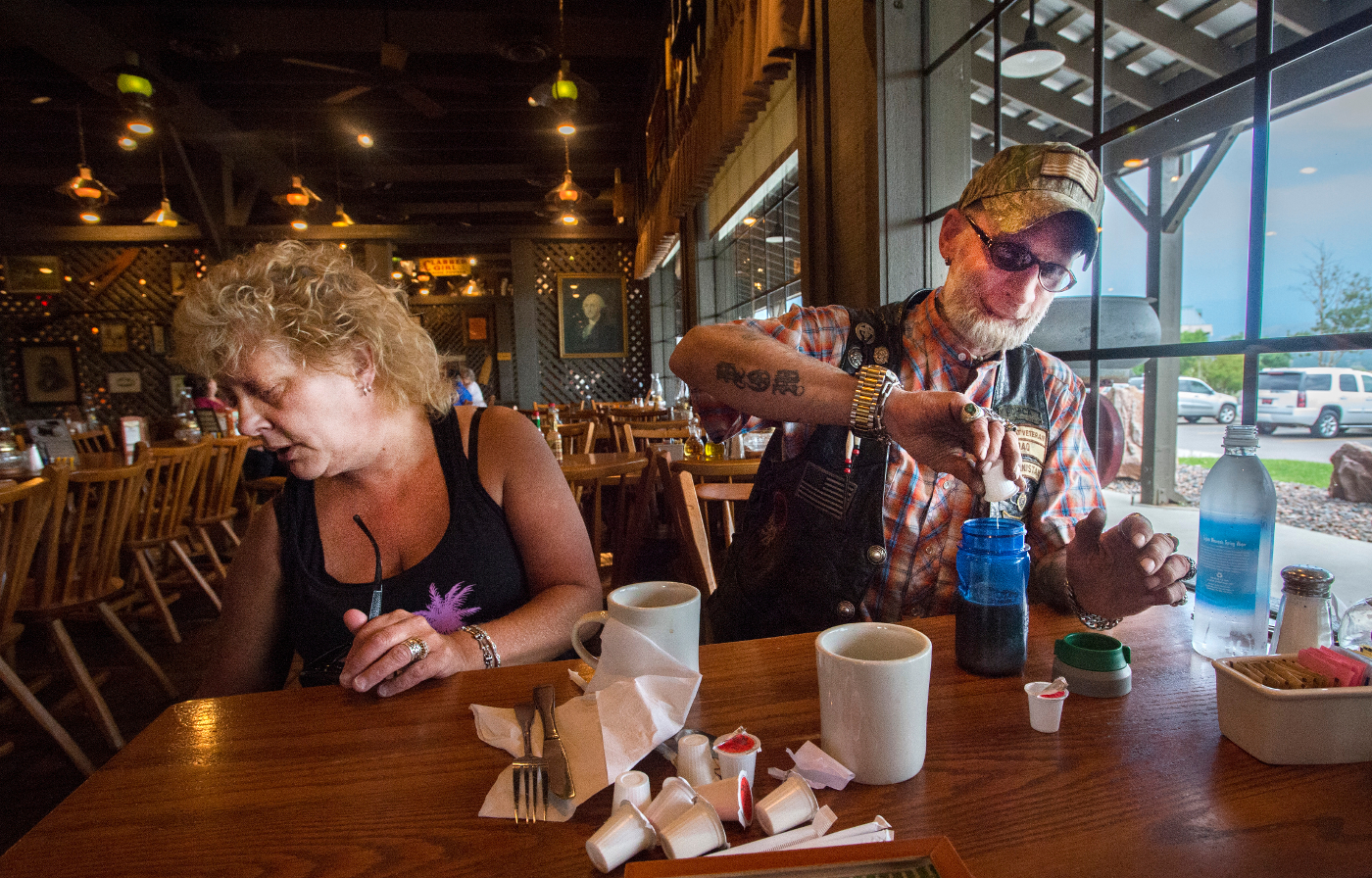 In August, Jerrald Jensen pours coffee and cream into a sippy cup while eating at a Colorado Springs restaurant with his wife, Robin. Jensen, who has no teeth, has trouble drinking from a normal cup and goes through a stack of napkins while trying to eat. A bomb blew off parts of his face in 2007 while he was in Iraq and left him toothless. Photo by Christian Murdock - The Gazette

“I didn’t realize how much it cost,” Jensen said of the impact on his life.

Bill collectors hound him and have garnished his disability pay because of old student loans and debt owed to the Army and Air Force Exchange Service on a “Star Card.”

When he tries to deal with his debts and untangle other problems, Jensen, whose speech was impaired by his Iraq wounds, sometimes gets a terse response.

Jensen was a latecomer to the Army, joining at 35. Getting in wasn’t easy. He needed waivers for his tattoos — souvenirs of a life spent drifting in Colorado and Arizona with bikers — and had to convince the Army that he would be of use despite being almost twice the age of most new recruits.

The Army gave Jensen a chance, sending him first to medic training in Texas and later to cavalry scout school in Kentucky before he landed at Fort Carson, not far from the Denver stomping grounds of his youth.

He was soon sent overseas with the post’s 4th Brigade Combat Team and its new 3rd Squadron of the 61st Cavalry Regiment, which became one of the most decorated outfits in the Army, earning three Medals of Honor.

On Aug. 22, 2007, Jensen was on patrol in Baghdad, where he was a driver for his unit’s operations officer. His Humvee was hit by one of the war’s newest weapons, a bomb called an explosively formed penetrator that shot a molten slug of copper into the vehicle’s thin armor and showered the interior of the Humvee with shrapnel.

Though badly wounded, Jensen slammed on the accelerator of the Humvee, bouncing the crew out of harm’s way. He was bleeding but ready to fight and grabbed his rifle and lurched out of the vehicle. An enemy round hit him in the arm, shattering his elbow before the bullet hit his back.

Jensen thought he would die that day. One of his last conscious memories is of a medic confirming his diagnosis.

But like many wounded soldiers in Iraq and Afghanistan, Jensen was pulled from death’s door by a revolutionary medical system that saves the lives of 14 troops for every one that dies of wounds.

In August, Jerrald Jensen and his wife, Robin, talk outside a Colorado Springs restaurant about his struggles with the Army after receiving an other-than-honorable discharge nearly three years ago. Photo by Christian Murdock - The Gazette

A helicopter rushed him to a hospital for stabilization, and he was later transferred to Germany then Brooke Army Medical Center in Texas — one of the most advanced medical facilities in the world for treating bomb patients. Jensen got a titanium jaw, rebuilt lips and a skin-grafted face during 16 surgeries over two years.

Medical paperwork shows the Army offered Jensen a retirement, assuming he was too injured for further service.

But in 2008 — a year after his injury — Jensen did something amazing. With a feeding tube and a tracheotomy, he came back to Fort Carson and reported for duty.

The sure-handed sergeant, jokingly nicknamed “Shaky” by his comrades, wanted back in the war. He got his wish in 2009, when his unit was deployed to Afghanistan. On duty in remote Kunar province, the now-toothless sergeant was praised for his work ethic and leadership.

While running to a gun position at a remote outpost called Bari Alai, Jensen reinjured his jaw and cracked a kneecap. The injuries ended his combat tour and landed him in a Fort Carson unit for wounded troops.

Jensen said he never clicked with leaders there, and friction drove more and more problems.

He was written up for a number of small issues. One letter in his file said Jensen couldn’t control his wife, Robin, who had screamed at commanders over his medical treatment.

Prescribed large doses of pseudoephedrine and other drugs for his wrecked sinuses, Jensen came up hot on a drug test for the illegal drug methamphetamine. The Army dropped the case as a false positive, but Jensen wound up under a spotlight in an Army that was rapidly downsizing as it drew down forces in Iraq and Afghanistan.

Jensen was retired from the Army. He gets a pension check and other disability benefits from the Department of Veterans Affairs.

The Army pledged to help him to success as a civilian with an advocate from AW2, a program designed to help severely wounded soldiers cut through red tape and deal with the daily issues of civilian life.

Jerrald Jensen sorts through piles of discharge paperwork from the Army in September at his Central City home. Jensen blames himself for the paperwork nightmare. The Army and Department of Veterans Affairs won’t comment on the specifics of Jensen’s case. Photo by Christian Murdock - The Gazette

Jensen, though, said the Army’s advocate won’t return his phone calls and his pay is screwed up. Combat-related special compensation for his wounds hasn’t been paid. Money for his wife, who functions as his caregiver, hasn’t come.

The Army wouldn’t directly address his issues but offered a statement defending its advocacy program.

“The goal of every advocate with every soldier and family they assist is to be there to provide support and assistance until their soldiers are well-established and receiving the financial and medical care support they require,” the Army said. “When this goal has been met, the role of the advocate routinely becomes much less involved with the everyday life of those they have assisted.”

Jensen said he has begged the Army and VA to help him get false teeth so he can properly eat. They haven’t delivered. One Army source claimed the military won’t give Jensen teeth because he smokes cigarettes, something deemed bad for dental work. 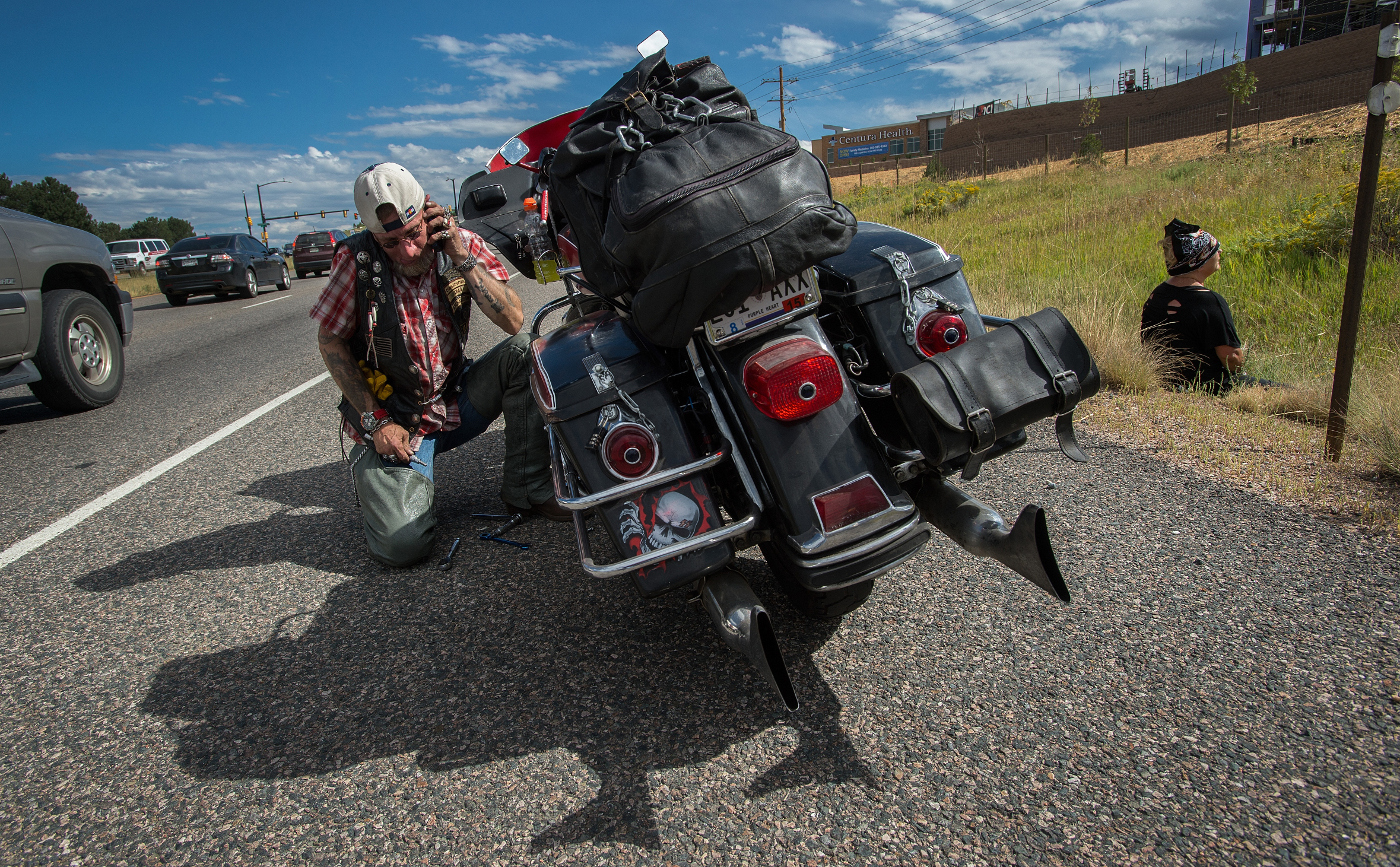 In September, Jerrald Jensen calls the Veterans Affairs clinic in Golden to say he will be late. His wife, Robin, sits in the grass after Jensen’s motorcycle broke down. Photo by Christian Murdock - The Gazette

Last month, Jensen and his wife headed to a meeting with the VA in a bid to straighten out some of his issues. A VA financial expert was visiting the agency’s Golden clinic, and Jensen got an appointment.

Obsessively, Jensen checked and rechecked the systems of his 1983 Harley motorcycle, a habit he said he picked up after his wounds. Robin, herself a sufferer of anxiety attacks, was running late. The couple feuded before roaring off.

On the highway, the old Harley shuddered, then stopped. Jensen quickly diagnosed the problem as a failed clutch cable. Grabbing tools from a bag on his bike, he fixed the problem, racing against a ticking clock for his appointment. 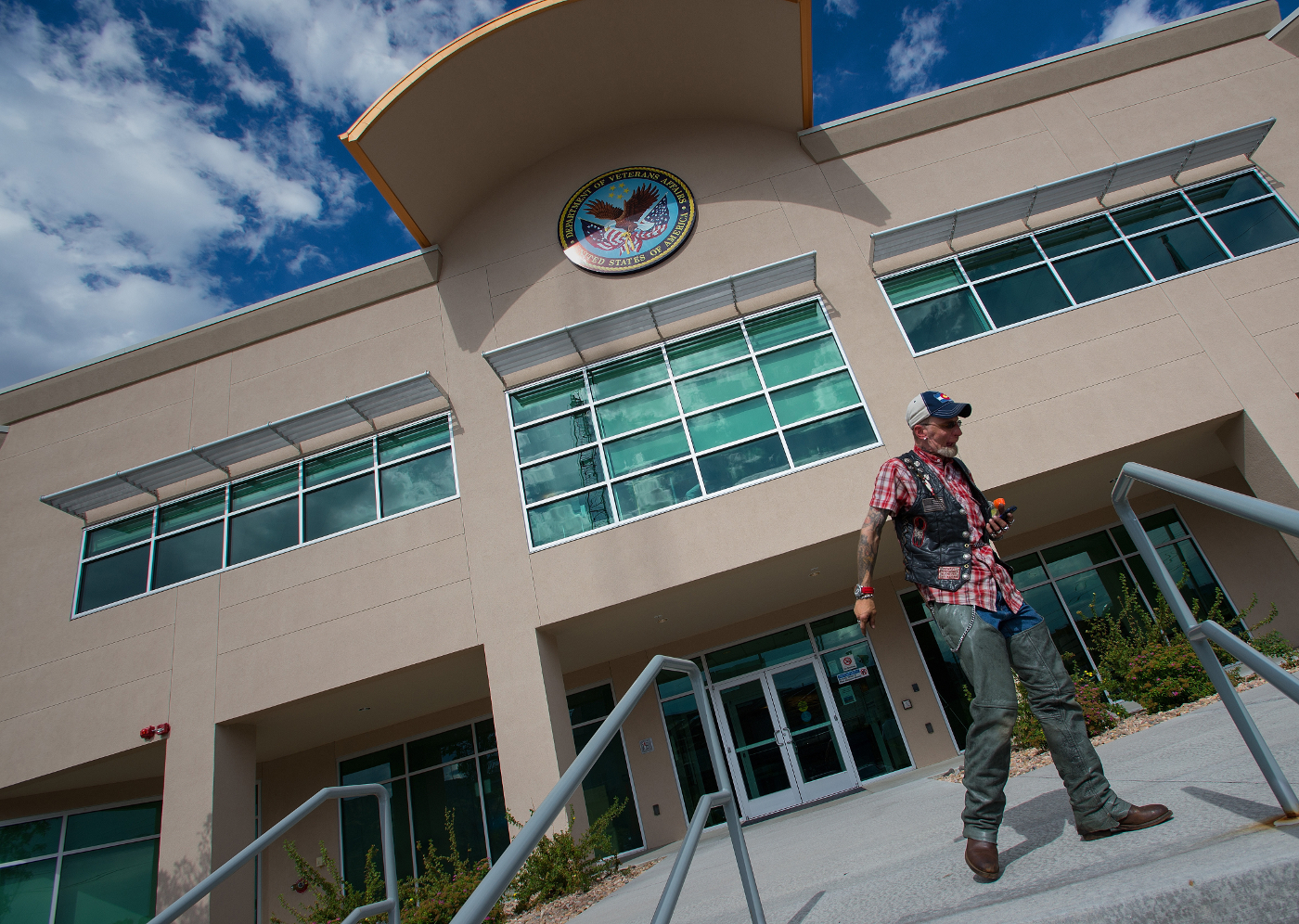 Jerrald Jensen leaves the VA clinic in Golden, Colo., after missing his an appointment with a financial adviser. Tuesday, Sept. 1, 2015. Photo by Christian Murdock - The Gazette

A couple of miles later, he repeated the repair. He later had to wrench on the bike for a third time. They reached the clinic a half-hour late.

Inside, a receptionist started at Jensen’s mangled face as he tried to explain why he was late for his appointment.

“You missed your appointment. He’s gone for the day,” the receptionist said.

In the parking lot, a frustrated Jensen lit a cigarette. He looked close to tears as Robin sulked by his broken bike.

“That’s the way this has been” he said. “Once you get behind, you just stay behind.”