Dr. Deborah Birx, right, takes off her mask as she goes to speak during a news conference with members of the Coronavirus Task Force at the Department of Health and Human Services in Washington, Friday, June 26, 2020. Vice President Mike Pence listens at left.

U.S. Correspondent for Seven News Australia Amelia Brace, puts on her mask after making an opening statement, Monday, June 29, 2020, on Capitol Hill in Washington, during the House Natural Resources Committee hearing on the police response in Lafayette Square. 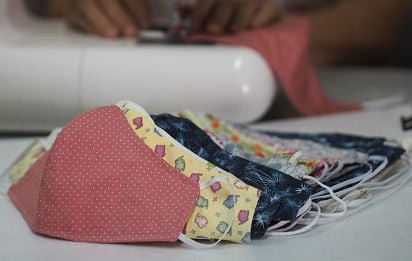 Dr. Deborah Birx, right, takes off her mask as she goes to speak during a news conference with members of the Coronavirus Task Force at the Department of Health and Human Services in Washington, Friday, June 26, 2020. Vice President Mike Pence listens at left.

U.S. Correspondent for Seven News Australia Amelia Brace, puts on her mask after making an opening statement, Monday, June 29, 2020, on Capitol Hill in Washington, during the House Natural Resources Committee hearing on the police response in Lafayette Square.

Masks not depriving us of freedoms

There are those that say that wearing a mask goes against the right of freedom of expression. My mask is my way of expressing to you, I respect you enough to subject myself to temporary discomfort. My action are taken to make sure further shut downs aren’t necessary. Wearing a mask confirms the pact we have to one another. I’m am looking out for you and you are looking out for me. If we as a community cannot trust or believe in each other, how do we come together to combat this virus.

As a military member I took an oath to protect this country and my mask is my weapon. This adversary does not use conventional weapons, so I must adjust the way I fight it. I love this city and the people in it. So when you see me in a mask remember I’m not doing this for me, I’m doing for you — even if you don’t reciprocate. A mask is not depriving us of any type of freedoms, we are.

Now that we have gotten a glimpse of what appeasement brings to the citizens and businesses of our country, we see Gov. Jared Polis signing Senate Bill 217 into law, further hamstringing the police from enforcing the laws of our state by allowing the police to be sued for doing their jobs. Why stop there? Let’s also include judges for not handing out tough sentencing to those who deserve tough sentences, parole boards for letting the people out of jails and prisons that do more harm to the people of our communities while on parole and politicians who do not defend and protect the people they have sworn to defend and protect when they took their oath of office.

That is what they do by allowing rioters to continue rioting without using law enforcement to enforce the laws on the books. Enforcement sometimes requires the use of force. Appeasement never ends. The demands continue to get more and more absurd. Just look at history, which the rioters are trying to destroy. It took WWII and the loss of 70 to 85 million lives to defeat the Nazis after the years of appeasement and looking the other way.

I am compelled to respond to AnneMichelle Johnson’s hate America diatribe. I was privileged to grow up poor with black families as neighbors and friends in the late 1940s and early 50s. In grammar school when Hilliard and I misbehaved Miss Wilcox would have us hold out our hands and the ruler didn’t care that he was black and I was white it hurt us both equally. We learned to behave at an early age.

One of our friends became the first minority commander of the Connecticut state police. Another a top cop on our small town’s police force, another a college professor and sadly, another died in Vietnam. All were American heroes.

The difference was that we all had role models who insured that we toed the mark. I have black friends in Colorado Springs and the reason they are an asset to the community is that they were raised by families who saw that they respected authority.

The rioting, looting and killing that is going on today is being led by Marxist anarchists who could care less about my black friends’ lives. The BLM movement is as racist an organization as the KKK or the Nazi party of the 1940s. They are using incredibly naive graduates of today’s colleges to front their hateful attacks on this country’s history.

If they really cared about erasing symbols of our “evil” past why in Massachusetts did they tear down a memorial to a regiment of black soldiers who fought and died to end slavery? They are trying to destroy our culture and they should beware of the silent majority of patriots in the land who if pushed far enough will enact a terrible toll on them.

I have had the privilege of having a friend on the Colorado Springs police force. I’ve done ride alongs, talked with cops here and over the years in Connecticut. I can tell you for sure 99.9% of blacks or whites are not racist.

In closing I would like to give the same advice to young black men that I gave to my grandsons when they reached the age where they were driving and going “out and about”:

If you get pulled over by a cop make sure it’s yes sir, no ma’am have a good day ma’am. Do that and if there’s an issue talk to me and we’ll handle it.

Is kneeling really a bad thing?

As we approach the Fourth of July celebration, where the founders of our nation rejected the inequities of England’s governance over its colonies in America, there will be many parades, marching bands and firework demonstrations. Some will stand, remove their hats and place their hand over their hearts during the national anthem or as the flag passes … but given the recent movement to kneel during the national anthem, I suspect there will be many who will kneel to express their dissatisfaction with the inequities in the treatment of some of the minority citizens of this nation.

When I was young, I learned to kneel before going to bed and while in church to show my respect as I prayed to my “father who art in heaven.” I knew to kneel before the lady I loved as I asked if she would have me as her husband. I observed people I respected kneel before Queen Elizabeth as she honored their achievements by conferring Knighthood upon them.

I won’t try to speak for or rationalize Kaepernick’s actions, but after all the violence and destruction we have observed in the past month, and during similar cases of apparent inequity, isn’t it about time for this nation to accept the fact we aren’t quite the “more perfect Union” the preamble to the Constitution inspires us to be?

Isn’t it possible that some will be proud and stand tall during the Fourth of July, while others may be concerned about the inequities they see, or experience, and choose to kneel with a prayerful hope to remind all of us that we are equal, and deserving of being treated with dignity and respect?

Why do the street names, school names and mascots need to be changed? The statues are part of history, you cannot change it. Where were all the complaints when these were being built and named?

Protesting is one thing but destroying one’s home, businesses is another. If history is wrong take down other statues that recognize other races also. Protest can be done without destroying property and stopping some from doing their jobs. I don’t understand, to me it is just an excuse to destroy things.

LETTERS: Next steps in our energy future; what the real world is like

Next steps in our energy future