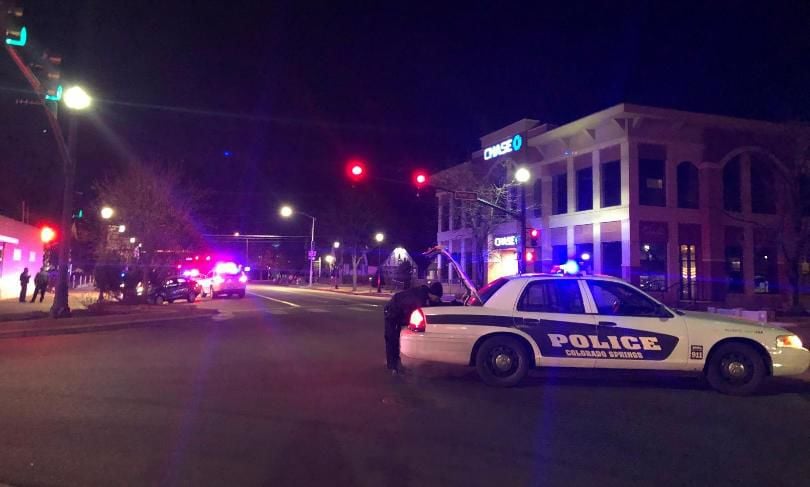 A man was in custody after going on a stabbing spree around downtown Colorado Springs early Monday. 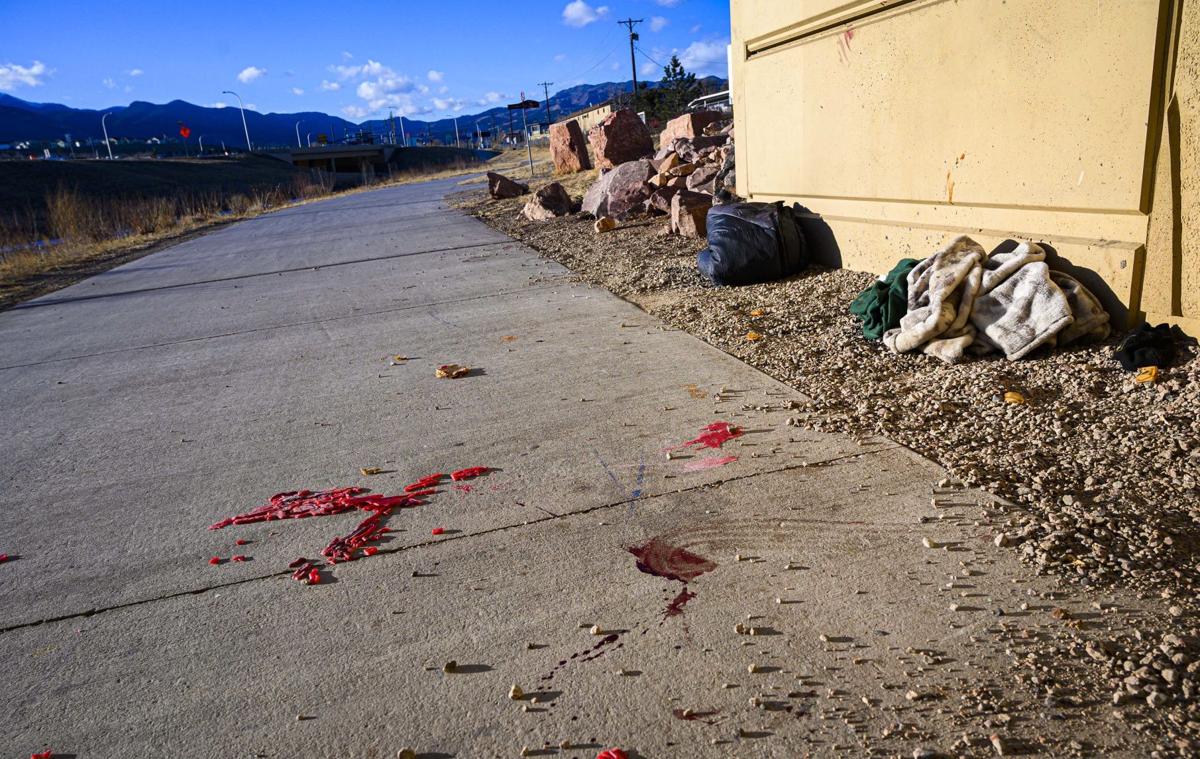 Blood from one of the eight stabbings early Monday morning stains the path of the Midland Trail along Fountain Creek in Colorado Springs, Colo., on Monday afternoon, Jan. 13, 2020. A man went on a 40-minute stabbing spree about 1:30 a.m. along a series of trails near Interstate 25 and downtown Colorado Springs. 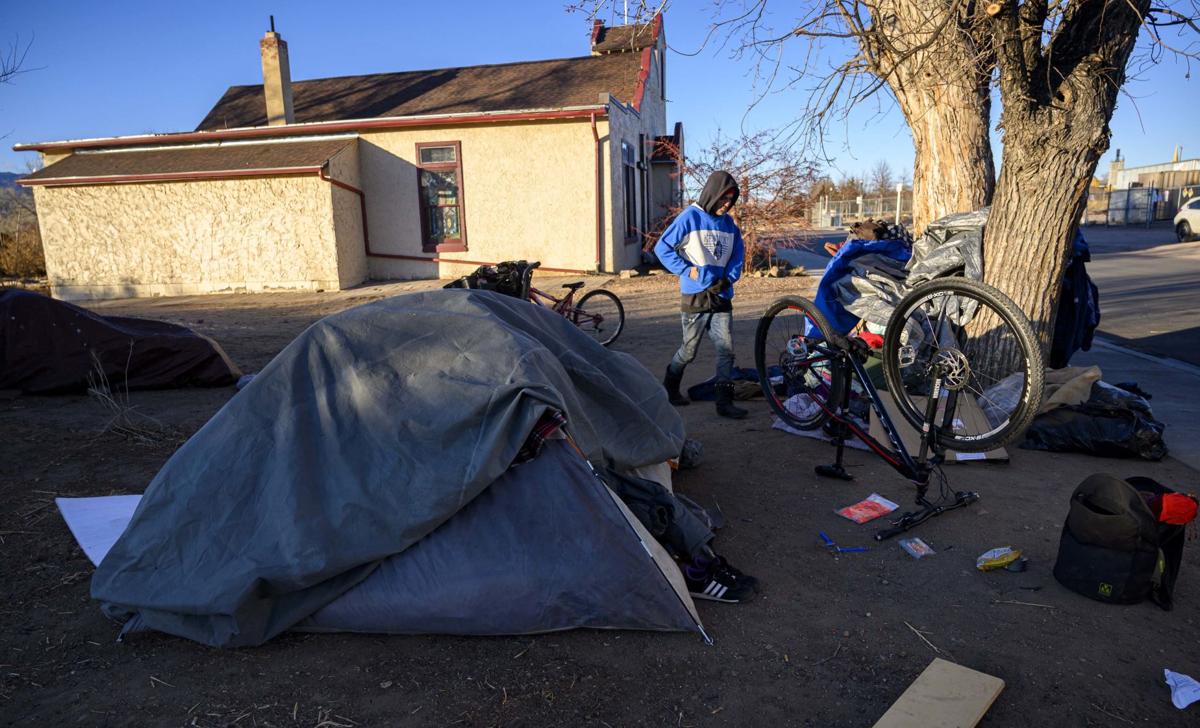 A homeless man walks past the tent near America the Beautiful Park in Colorado Springs where Terri Poore, who witnessed one of the eight stabbings during an assailant’s spree early Monday, rests inside Monday afternoon, Jan. 13, 2020. Two people remain hospitalized as of Monday afternoon with non-life threatening injuries.

A man was in custody after going on a stabbing spree around downtown Colorado Springs early Monday.

Blood from one of the eight stabbings early Monday morning stains the path of the Midland Trail along Fountain Creek in Colorado Springs, Colo., on Monday afternoon, Jan. 13, 2020. A man went on a 40-minute stabbing spree about 1:30 a.m. along a series of trails near Interstate 25 and downtown Colorado Springs.

A homeless man walks past the tent near America the Beautiful Park in Colorado Springs where Terri Poore, who witnessed one of the eight stabbings during an assailant’s spree early Monday, rests inside Monday afternoon, Jan. 13, 2020. Two people remain hospitalized as of Monday afternoon with non-life threatening injuries.

Springs also has a darker side

I read this morning (Jan. 14) in the Gazette, with much dismay, about the multiple stabbing incident in the downtown Colorado Springs area early Monday. Eight of our citizens have been slashed and severely traumatized by a homeless person with a knife.

Fortunately, there are apparently no life-threatening injuries. There were two similar incidents this month in Austin, Texas, which did result in loss of life when an apparently homeless persons with knives terrorized their downtown area. Texas Gov. Greg Abbott tweeted after the latest incident that there would be an increase in law enforcement presence in the downtown area, while also asking “How many people will be killed and injured before Austin reforms its homeless policies?”

Colorado Springs continues to revel in many national surveys about the desirability of living here for a multitude of reasons. We are blessed with great natural beauty, a thriving economy, and an amazing local history. But we also have our darker side. Especially downtown.

LETTERS: The 'stay homeless' message in Colorado Springs; moving in the wrong direction

The area has seen a fabulous renaissance over the years and has become a gem for visitors and residents alike. But I and many of my friends are now reevaluating whether we want to spend time there anymore. “Hey man, got a spare buck?” “Dude, got some extra weed?” “Sure could use a drink buddy.” “Do you love God?”

No one wishes ill for those who are suffering homelessness, whether by choice or by circumstance. Solutions are elusive, and the problem is growing. But don’t doubt that it’s affecting the quality of life in our town.

My wife and I and friends used to regularly ride bikes on the Greenway Trail along Monument Creek from Corporate Drive to the north to El Pomar Youth Sports Complex to the south. No more. We got tired of driving through poop on the trail, steering around broken glass, seeing piles of garbage along the creek bed, and smelling smoke and human waste. When a disoriented homeless person ran out in front of me on the trail, causing a crash and injury, my ER tab was around $8,000.

Our beautiful downtown is suffering. The city parking enterprise should be providing free parking to all instead of raising the rates and making it confusing and inconvenient for people to visit and patronize merchants.

All you have to do is look at the other developing entertainment and shopping areas around our city like University Village, First and Main, the rapidly expanding north side, or any number of other areas, and you suddenly realize the choices are mind-boggling, there are acres and acres of free parking, nobody is approaching you for whatever they might want from you, and you feel pretty much safe and secure.

So why would I want to spend time or treasure downtown until things get back under control?

A tax on electric vehicles

More and more electric cars are coming, and The Gazette better learn to deal with it. I don’t dispute that there might be abuses in the mining of certain minerals needed for batteries, as The Gazette alleges. But similar abuses have been more widely reported in the extraction of say, diamonds, and I don’t see The Gazette calling for higher taxes on jewelry stores.

As for additional financing for roads, of course the logical revenue source is a fuel tax increase. It almost goes without saying, those who use the most fuel are the ones who are getting the most usage from our streets and highways. At this point, electric cars are still only a miniscule portion of the vehicles on the road, and the consensus seems to be that they are beneficial in helping reduce air pollution and greenhouse gases. As their numbers grow, it would seem appropriate to phase in some form of taxation to make these drivers pay their share of road costs, such as through an additional mileage-based annual registration fee.

I think the voters have made clear that a general sales tax increase is not a desirable solution for transportation funding. And The Gazette’s call for a semipunitive tax on electric cars seems more like a grudge than a serious proposal.

The problem is the system

I sent a message to our president to do something about health care, that if he doesn’t the vacuum of leadership in this matter will be filled by his opponents and by the time they have a candidate this will be an issue he will be blindsided by.

I have been on/off work, employed, minimally employed and unemployed since moving here. While unemployed, I and many are unable to afford the high cost of health care. I’m a disabled vet, but my disabilities are not such to get full health care. Medicaid requires you earn pay but not over a certain point. I went to a facility — I prefer not to name since they all are the same — excellent care, but after finding Medicaid was cut for earning slightly over the maximum pay.

The facility did not contact me to inform until a year later that treatment for a small injury resulted in a bill of $2,400. I understand the system allows this, but I was given no option but to pay and was threatened with a lawsuit. I paid a negotiated $2,000 for a simple procedure that took five minutes with local anesthesia.

This is not right. It is not just this facility, all do the standard operating procedure, though these facilities should try to work with their patients instead of using lawyers. The problem is our system. It must be portable, guaranteed that all can afford. Contact your representatives on this.

I wonder how many of your Gazette readers saw the interview with Nancy Pelosi’s daughter, Christine Pelosi, on Monday night’s Fox News? The Fox interviewer did her best to get her to comment on the fact that Pelosi was holding up the sending of the “urgent” articles of impeachment to the U.S. Senate. Pelosi’s daughter sounded like a recording of her mother.

It is interesting to note that after one generation of “enlightenment” that the daughter had not one new original thought! It was kind of like inserting a paper in the copy machine and wondering why the copies all came out the same!