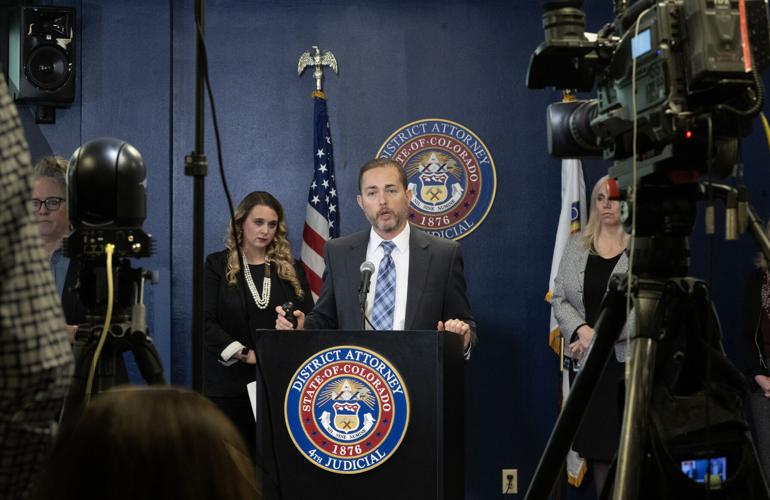 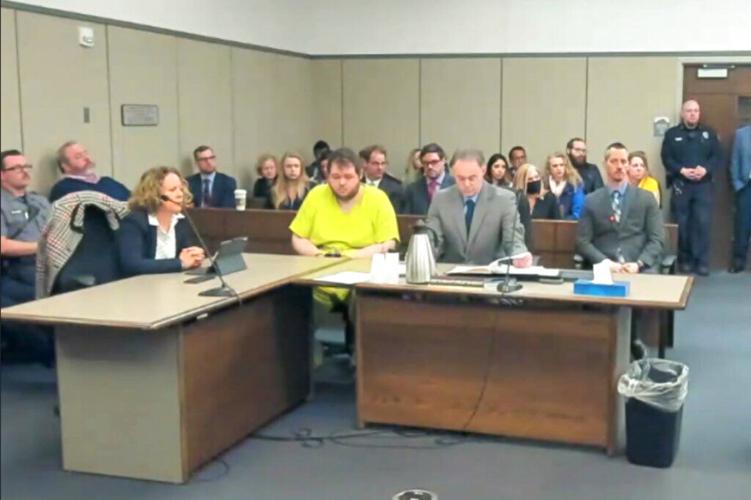 Four days before Anderson Aldrich was scheduled to go to trial last year on charges of threatening to set off a bomb and become the “next mass killer,” a prosecutor handling the case could not provide details to the presiding judge over why a key witness might not be available to testify, according to court documents and testimony.

The prosecutor for the 4th Judicial District Attorney's Office struggled to answer basic questions from the judge during a hearing on the witness’ efforts to quash a subpoena due to deficient service. Up until that point, the yearlong case had been handled primarily by a different prosecutor.

“We have a hearing about whether service was proper or not, but it sounds like the DA doesn’t have all of her information in front of her to be able to say service was proper, here is who made it, here’s their testimony,” said District Court Judge Robin Chittum during the July 1, 2022, hearing.

Four days later, on the day of the trial, the judge dismissed the case after the prosecutor told her the witness never was personally served, and that the subpoena for testimony had merely been left on the witness’ front door. Aldrich, who was 22 at the time the judge dismissed the case, escaped a potential long prison sentence on seven felony counts.

Now, Aldrich stands accused of carrying out the Nov. 19 mass shooting at Club Q that left five people killed and another 22 injured.

The revelations gleaned from transcripts of court hearings obtained by The Gazette raise questions about how aggressively prosecutors pursued the earlier case against Aldrich and whether enough was done to stop Aldrich when he threatened to be the “next mass killer" a year and half ago.

Former Denver District Attorney Mitch Morrissey said he once dispatched an investigator to Florida for 10 days to secure the testimony of a reluctant witness in a first-degree murder case.

“He got the guy into court, and basically the judge said, ‘You get on the airplane, or you’re going to spend all the rest of the summer here in Florida, in our county jail, with no air conditioning, and I’m going on vacation, and I’m not going to let you out until I get back,’” Morrissey recalled.

“It can be done, renditioning witnesses. There’s no doubt about it.”

Former Arapahoe County District Attorney George Brauchler said witnesses must be served in person for a subpoena to be valid for uncooperative witnesses. Leaving a subpoena on a front door, as was done in the Aldrich bomb-threat case, won’t suffice, he said.

“You want them under personal service. Then you can go to the court and say, ‘We followed the rules, and they’ve now skipped out on service.’ You can then ask for a warrant for their arrest or ask for a continuance.”

Brauchler and Morrissey cautioned that they didn't know the specifics of how subpoenas in the bomb threat case had been handled.

Judge warned of Club Q attacker's shootout plans: 'It's going to be so bad'

District Attorney Michael Allen, the top prosecutor for El Paso County, in a press conference last week blamed family members who didn’t want to testify against Aldrich for the dismissal of the earlier case.

The family “didn’t cooperate, and it led to the dismissal of that case,” Allen said. “But this office absolutely prosecuted it; we prosecuted it until we couldn’t any longer.”

Allen’s spokesperson, Howard Black, has not responded to requests that he give details on what steps Allen’s office took to personally serve a subpoena on a reluctant witness and what the process server did. The District Attorney’s Office also has not made the prosecution file available for public review, despite a request from The Gazette.

Some details on how aggressively the prosecution team pursued the case can be gleaned from transcripts of court hearings.

During one earlier court hearing on Dec. 16, 2021, another prosecutor, Assistant District Attorney Younsung Park, told the judge that there was the potential for a long prison sentence against Aldrich that the prosecution “would want to see mitigation for.”

She added that she wanted “to see more information to make the best offer possible for all parties involved.”

During an Aug. 5, 2021, hearing, Chittum, the district court judge, reduced a $1 million bond that kept Aldrich incarcerated in the El Paso County jail to $100,000 after the defense argued Aldrich struggled with post-traumatic stress disorder and separation anxiety, and that those conditions escalated when his grandparents told him they were moving to Florida.

His grandmother needed to move because the high elevation in Colorado exacerbated a lung condition she struggled to control, his lawyer said.

Aldrich, reading from a statement he prepared, testified during that hearing that he would seek medical treatment and psychiatric counseling to quell the type of turmoil and the use of heroin and alcohol he had struggled with when he realized his grandparents were relocating.

“I see the mental health piece here,” the judge said during the hearing. “I see that this person sitting here with me in my courtroom is not the person who was caught up in all of this. Mr. Aldrich was a different person that day. But, holy cow, that was a scary person.”

During a July 1, 2022, hearing, held four days before the scheduled trial date, Assistant District Attorney Desiree Sullivan fumbled for an answer when the judge asked whether prosecutors had told Aldrich’s grandmother, a key witness who had moved to Florida, that she wouldn’t have to pay for her flight from Florida to testify.

“A lot of time, they, they think just because they get a subpoena, they’re going to have to pay for themselves to fly out and everything,” Judge Chittum said. “Sometimes that resolves these issues. Have you been able to contact her?”

“Let me double-check,” the prosecutor said. “I’m looking into my contacts here.”

Eventually, Sullivan said prosecutors only had been able to leave phone messages for the grandmother.

Sullivan was making an appearance in a case that, by that time, had been pending for nearly a year and had been primarily handled by another prosecutor. She said during the hearing that she believed the judge should leave until the day of trial — scheduled four days later — a ruling on the issue of what had been done to secure the witness and whether the witness could be compelled to testify.

“It sounds like from all parties, we know that the victims are probably not going to come here on their own volition,” Sullivan said.

The witness the prosecutor was trying to secure for the trial was Pamela Pullen. Pullen reported to a 911 dispatcher on June 18, 2021, that her grandson, Aldrich, was making a bomb in the basement and that he told her he “was going to be the next mass killer” and wanted to go “out in a blaze,” according to an affidavit from El Paso County Sheriff’s Deputy Bethany Gibson.

The grandmother also told the dispatcher that she and her husband “have been living in fear due to Anderson’s recent homicidal threats towards them and others,” the affidavit further states. Pullen also reported Aldrich had threatened to kill his grandparents with a loaded Glock handgun and had chugged vodka, which he said he needed for “what he’s about to do,” according to the arrest affidavit.

“You guys die today, and I’m taking you with me,” the grandmother reported Aldrich as saying, according to the affidavit.

Law enforcement officials seized two guns from Aldrich after that incident: a 9 mm pistol that was a “ghost gun,” as well as an AR-15 rifle. They also took from his possession about 10 gallons of Tannerite, a brand of explosive targets, as well as 113 pounds of ammonium nitrate and packets of aluminum powder, according to sheriff’s investigative reports. Ammonium nitrate and aluminum powder become explosive when combined.

A lawyer representing Aldrich’s grandmother, who had moved from Colorado Springs to Ormond Beach, Fla., told the judge during the hearing held four days before the trial date that, while the grandmother wasn’t thrilled about testifying against a family member, the real issue in securing her testimony was her health.

“My client is in ill health, your honor,” said the lawyer, Aaron Gaddis. “She’s basically bedridden, my understanding is roughly 24 hours a day, and is reliant upon her husband and some other people to help her out.”

The hearing shows that the judge, at the request of the defense lawyer, asked Sullivan to prepare a brief over the weekend on the issue of whether Aldrich’s grandmother could be compelled to testify.

“I’m thinking at least 500 words,” the judge said as to what she expected to be the minimum length of the brief.

No brief on the witness subpoena issue can be found in the court file or in the register of action detailing motions and filings in the case.

When the trial date arrived, Sullivan told the judge that a process server had only left the subpoena to testify on the front door of Aldrich’s grandmother. The prosecutor said the process server had failed in the efforts to have Pullen personally served.

“It’s my reading, then, that they were unable to have that hearing that’s required in Florida to tell the witness that they are compelled to testify in another state,” Sullivan told the judge.

During the four-minute hearing held on the scheduled trial date, Sullivan, the prosecutor, didn’t argue to keep the case alive.

The judge dismissed the case after the prosecutor requested a continuance, saying a previous continuance already had been granted during an earlier May 19, 2022, hearing. The judge said the prosecution was in danger of violating speedy-trial statutes, which require a defendant to have a trial within six months after a defendant’s guilty plea.

“Well, what it boils down to is, I’ve granted one continuance to the DA in the past; the second continuance will be denied,” the judge said. “They knew this was going to be an issue coming up.”

The Summit County district court judge who recently launched into a courtroom tirade just two days after returning from a mandated suspension and anger-management counseling has resigned.