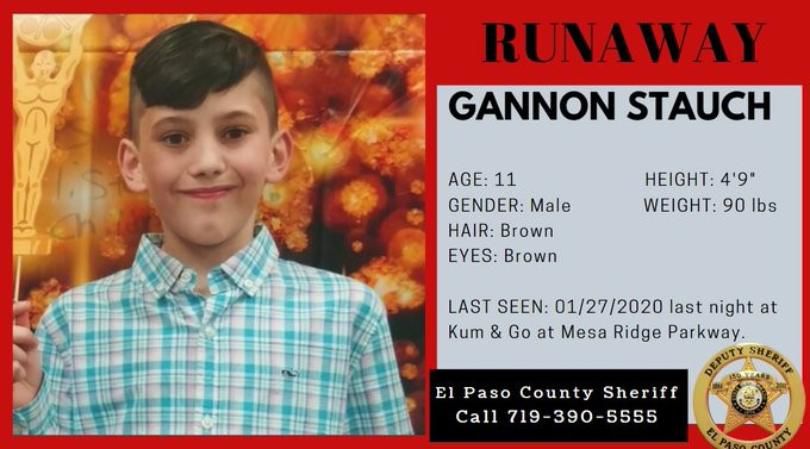 Gannon Stauch was last seen wearing a blue jacket and jeans and reportedly left his home on foot. 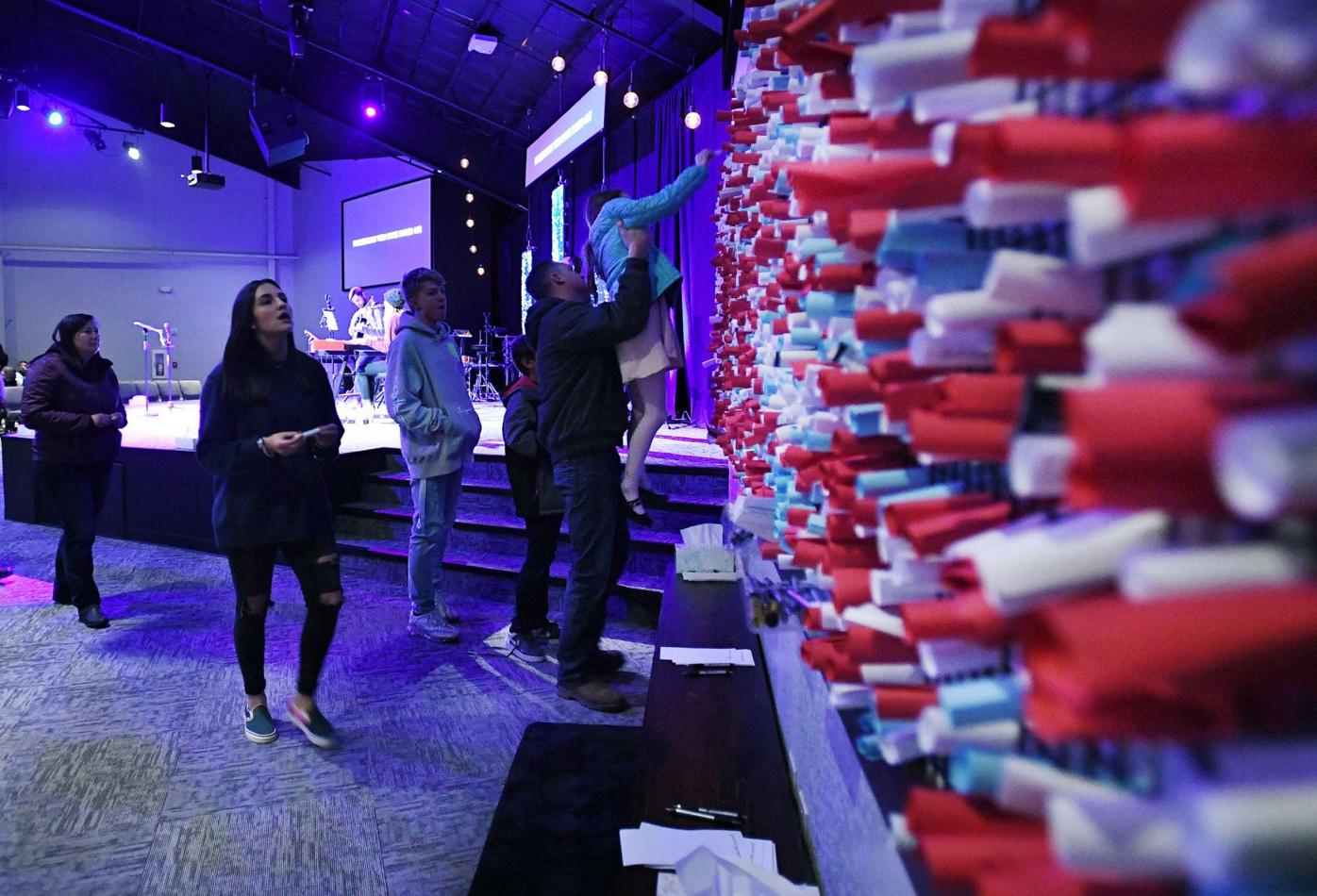 A prayer wall is filled with hand-written prayers by those attending a vigil for 11-year-old Gannon Stauch who has been missing since Monday afternoon. Stauch was last seen between 3:15 and 4 p.m. at his home in the Lorson Ranch neighborhood of Colorado Springs before leaving on foot for a friend's house. The vigil was held at the Restoration Church in the Lorson Ranch neighborhood, where Stauch lives with his family. (Photo by Jerilee Bennett, The Gazette) 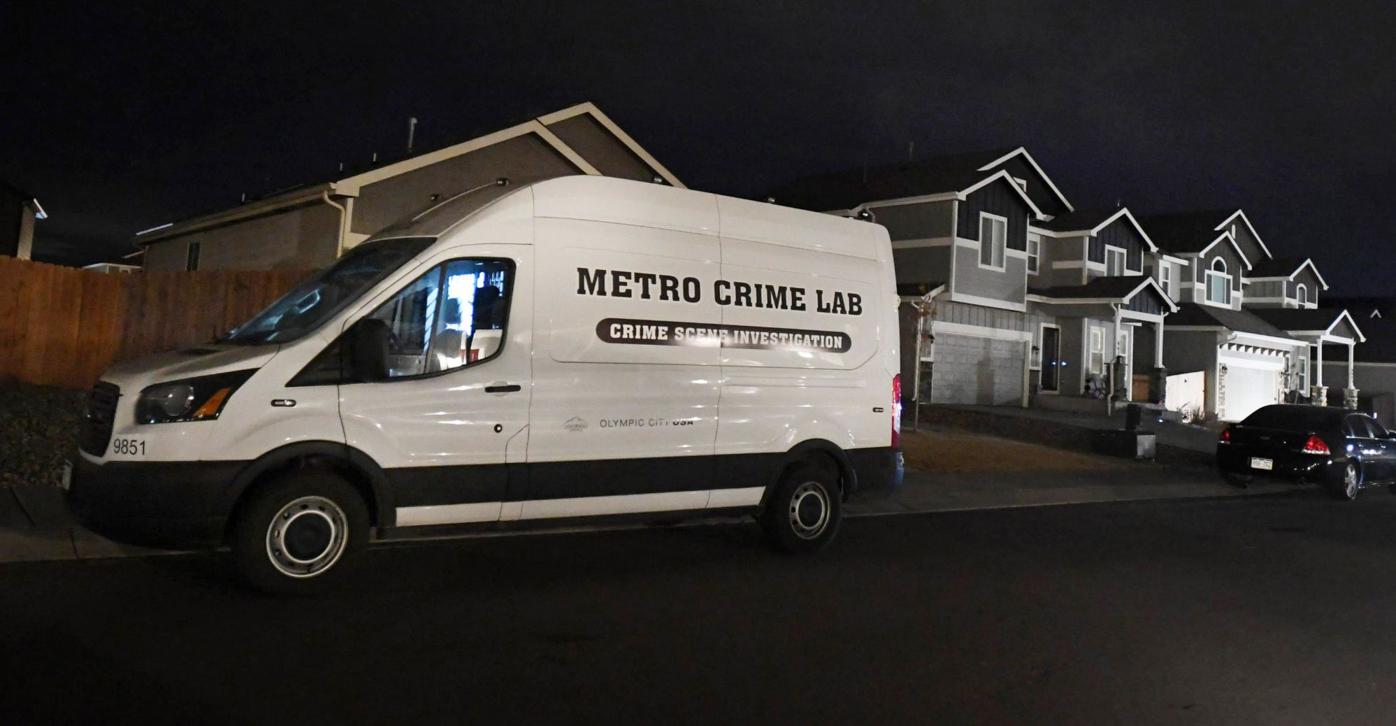 Gannon Stauch was last seen wearing a blue jacket and jeans and reportedly left his home on foot.

A prayer wall is filled with hand-written prayers by those attending a vigil for 11-year-old Gannon Stauch who has been missing since Monday afternoon. Stauch was last seen between 3:15 and 4 p.m. at his home in the Lorson Ranch neighborhood of Colorado Springs before leaving on foot for a friend's house. The vigil was held at the Restoration Church in the Lorson Ranch neighborhood, where Stauch lives with his family. (Photo by Jerilee Bennett, The Gazette)

More than 48 hours after an 11-year-old boy went missing from his home near Fountain, a crowd of hundreds gathered Wednesday night to pray for his safe return.

At least 300 people packed Restoration Church on Peaceful Valley Road for the prayer gathering. Earlier in the day, authorities had asked for the public's help in finding Gannon Stauch, who they believe to be a runaway.

"Praying and reading Scripture is the best thing we can do (for Gannon)," said pastor Andy Davenport. People were urged to write down their prayers and put them on a designated "prayer wall" where they would "go up to God."

Gannon was last seen by his stepmother between 3:15 and 4 p.m. Monday at his home in the Lorson Ranch neighborhood of southeast Colorado Springs before reportedly walking to a friend's house across the street, according to El Paso County sheriff's Sgt. Deborah Mynatt.

On Wednesday, the Sheriff's Office sent out a statement on the missing boy after having posted several notices on social media in recent days. Mynatt had said Tuesday the office's Major Crimes Unit was investigating the boy's disappearance, and the mobile crime lab was parked in front of the family's house on Wednesday.

Mynatt downplayed both developments, saying investigators do not suspect foul play and still suspect Gannon is a runaway.

About 200 volunteers searched a nearby vacant field and nearby neighborhoods Wednesday morning and afternoon, but did not find any sign of the missing boy, an organizer said. Deputies, too, continued to search for the boy, and his information has been added to the FBI's National Crime Information Center database, Mynatt said.

The boy's father, Al, a member of the Colorado Springs-based Colorado Army National Guard 100th Missile Defense Brigade, released a statement to The Gazette on Wednesday via a brigade spokesman.

Gannon's great aunt, Veronica Birkenstock, characterized the boy Wednesday morning as quiet and smart as she waited to board a plane from Texas to Colorado Springs, where she intended to meet with law enforcement regarding the potential formation of an official search.

"She doesn't have very much, just what she's been told, that no one has seen Gannon since Monday," Birkenstock said.

She characterized Gannon as "a very loving child. Disappearing is totally out of his character; he always has to be with somebody."

He was born prematurely weighing less than a pound, she added. "He's been a fighter his whole life."

Gannon's mother, who lives in South Carolina, and father, who was away for military training at the time of his disappearance, share custody, she said.

As for how Birkenstock herself is holding up, "I'm a basket case," she said. "I'm going back and forth between panic and hope, and I can only imagine what (Gannon's mom) is going through."

Cars lined a road near the entrance of Lorson Ranch on Wednesday as 200 volunteers canvased the neighborhood and surrounding area, searching for Gannon.

Search organizer Sara Robertson said she has no connection to the family and that the search was not sanctioned by law enforcement. But as the mother of two children, she felt something needed to be done.

"I was up all night last night" worrying about Gannon, she said, adding that she woke up Wednesday morning thinking, "Let's do something; it's been a couple of days," before working with others to hurriedly organize the search in the early hours of the morning.

Richard Cadet was among the volunteers who showed up Wednesday, saying he'd hope strangers would offer him the same kindness if his little brothers were missing.

He said he was sure that "law enforcement is doing as much as they can. ... Us out here helping them is a good thing."

Gannon is 4 feet, 9 inches, with brown hair and brown eyes, and weighs 90 pounds. He was wearing a blue jacket and jeans the day he went missing.

Mynatt said Gannon did not attend school Monday, but offered no explanation. Investigators are not aware of any at-risk factors, she said.