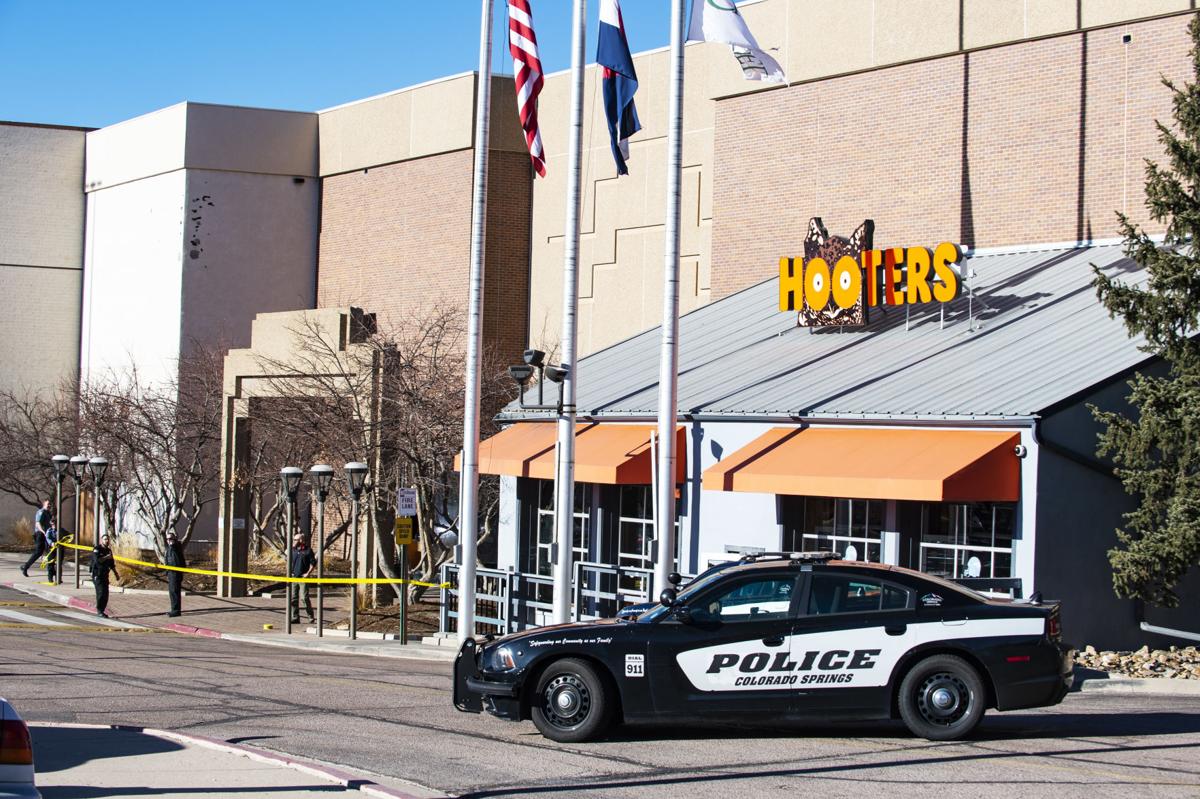 Officers tape off the area where a shooting occurred outside the Hooters restaurant Tuesday at The Citadel mall in east Colorado Springs. Two men were seriously wounded in the shooting, which forced the closure of the mall for the day. The Citadel was set to reopen at 9 a.m. Wednesday. 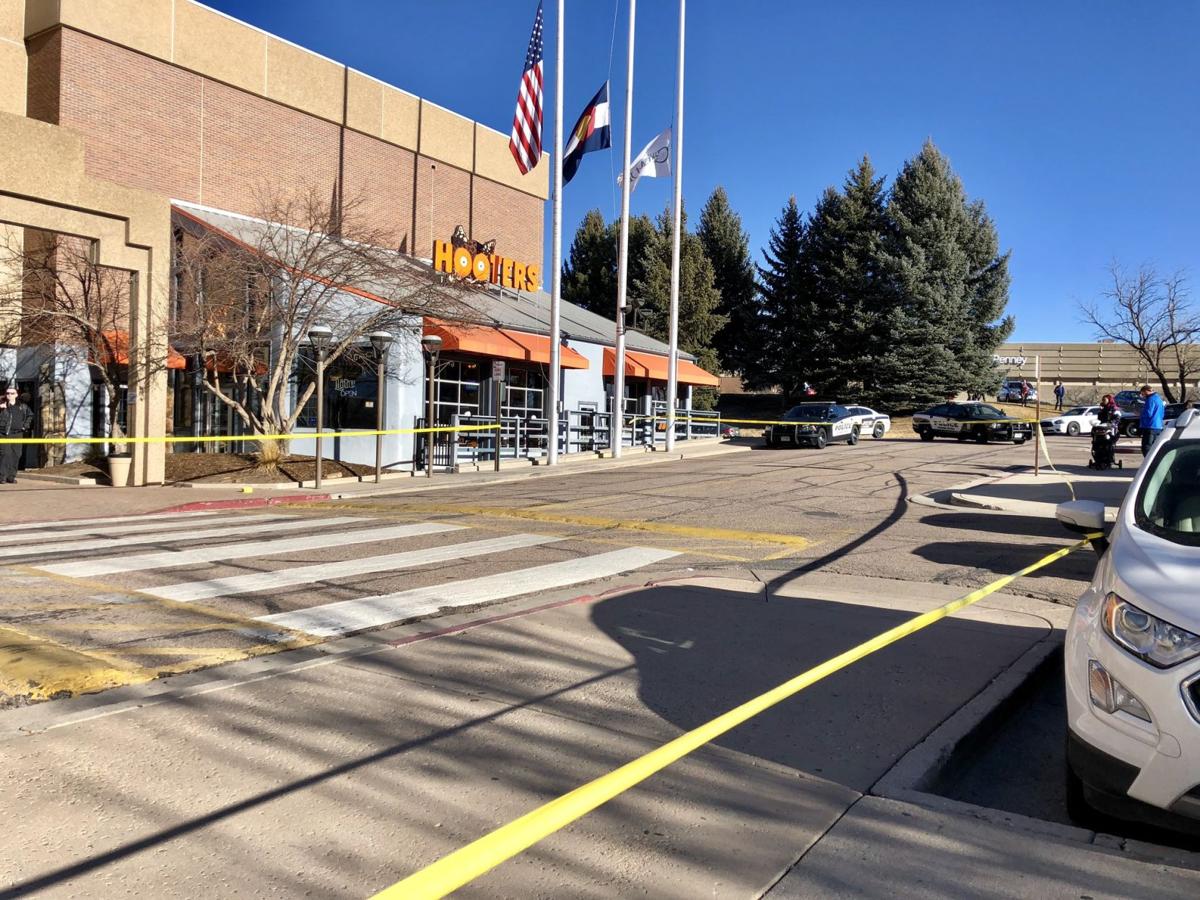 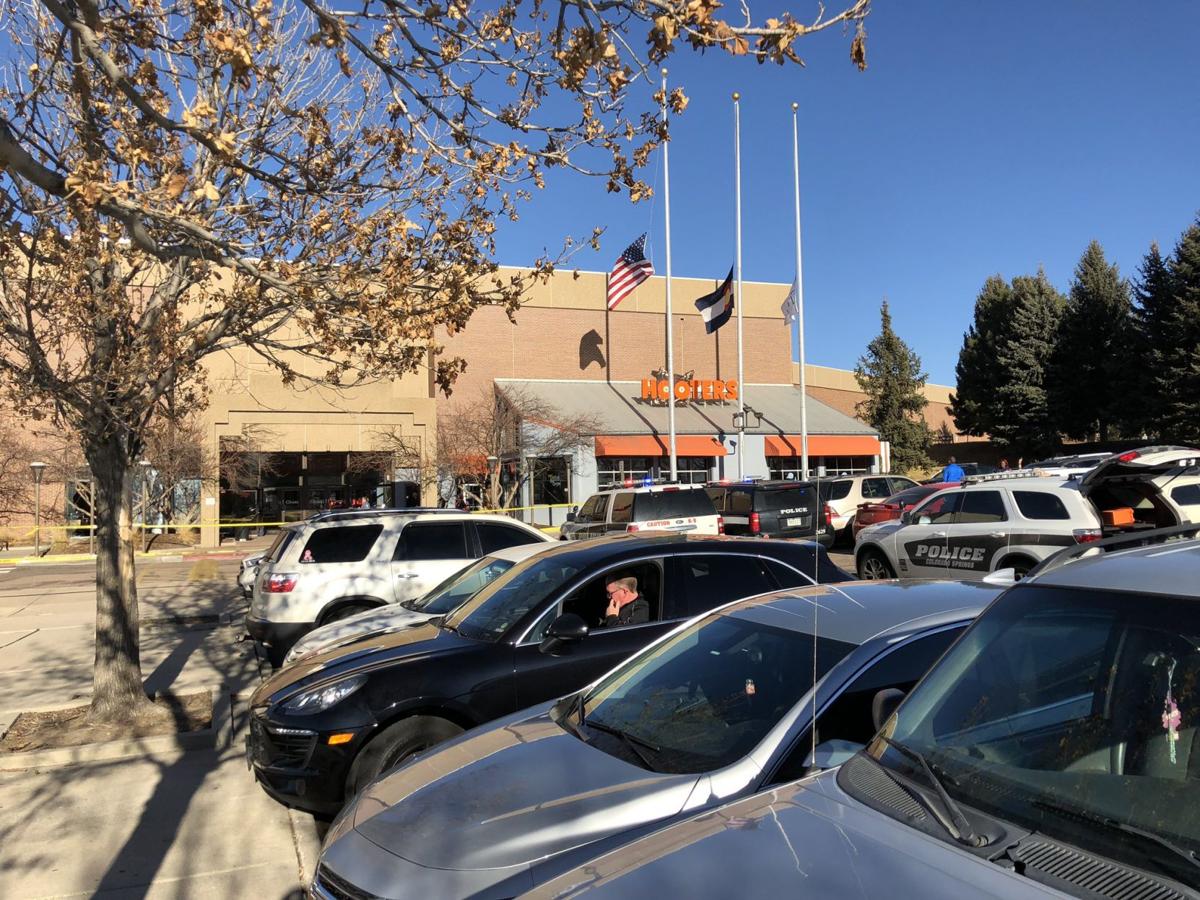 Officers tape off the area where a shooting occurred outside the Hooters restaurant Tuesday at The Citadel mall in east Colorado Springs. Two men were seriously wounded in the shooting, which forced the closure of the mall for the day. The Citadel was set to reopen at 9 a.m. Wednesday.

At the height of the holiday shopping season, a drive-by shooting at The Citadel mall severely wounded two men Tuesday just outside of the Hooters restaurant.

The gunfire shattered windows and forced the mall to close for the rest of the day just a week before Christmas.

Shots were fired from a car after some yelling back and forth about 1:45 p.m., police spokesman Lt. Howard Black said.

Officers found one victim outside and another just inside the mall.

The men were hospitalized with injuries that weren’t life-threatening. The shooting appeared to be deliberate, as people on both sides seemed to know one another, Black said.

No arrests had been announced Tuesday evening.

Will Porter said he heard arguing, then gunfire, as he worked at Nyky’s Hair Studio 1. The barbershop’s windows were shattered, but none of the dozen or so people inside was injured, Porter said.

“Everybody got down on the ground,” he said. “It was nerve-wracking. I was just seeing a lot of people just trying to find cover, to get on the ground.”

“Obviously the incident today had an effect on our operations, but we are hoping that people understand that it was an isolated incident, and that The Citadel will be open for business as usual for the holidays,” Lais said. “Safety for our tenants and for our shoppers and for our retailers is our first and foremost concern.”

This was the second shooting at The Citadel in less than two weeks. About 3:45 p.m. Dec. 8, shots were fired in a parking lot near the food court entrance, police said. No injuries were reported.

The shootings underscore what commercial real estate brokers have said is The Citadel’s reputation, real or perceived, as a magnet for crime. Because of that stigma, some shoppers worry about their safety, while retailers and restaurants shy away from the mall if they suspect it has a crime problem, brokers have said.

The Citadel’s viability as a retail center has been debated for years in the commercial real estate community.

The 1.1-million-square-foot mall opened in 1972 when its location northwest of Academy Boulevard and Platte Avenue represented the east edge of Colorado Springs.

But enclosed malls have struggled for years in many cities as they compete with trendier lifestyle centers, shifting demographics and changing consumer preferences. The Springs has grown to the north and northeast, passing the aging Citadel and other shopping centers in the central city.

Retailers have bolted for North Academy and, in more recent years, Powers Boulevard, to be part of shopping centers to the north and northeast. Store and restaurant owners prefer the higher household incomes in those areas over older neighborhoods around The Citadel, say commercial real estate industry members.

Some commercial brokers have suggested The Citadel needs a major makeover, if not a partial or full demolition.

The former Macy’s at The Citadel has stood vacant since it closed nearly a decade ago; some brokers have said the 193,000-square-foot space should be converted to apartments. Other portions of the mall should be razed to make way for offices and newer retail areas, they’ve said.

The Citadel was purchased for a bargain-basement price of $20 million in December 2015 by a New York investment group; the same group bought the north side Chapel Hills Mall for $33.5 million this year.

Update: Two more victims in shooting at The Citadel mall

Correcting earlier reports that two people were wounded in a drive-by shooting Tuesday at The Citadel mall, police said Wednesday that three p…

This is what this side of The Citadel mall looks like right now. pic.twitter.com/FOuL00hNms