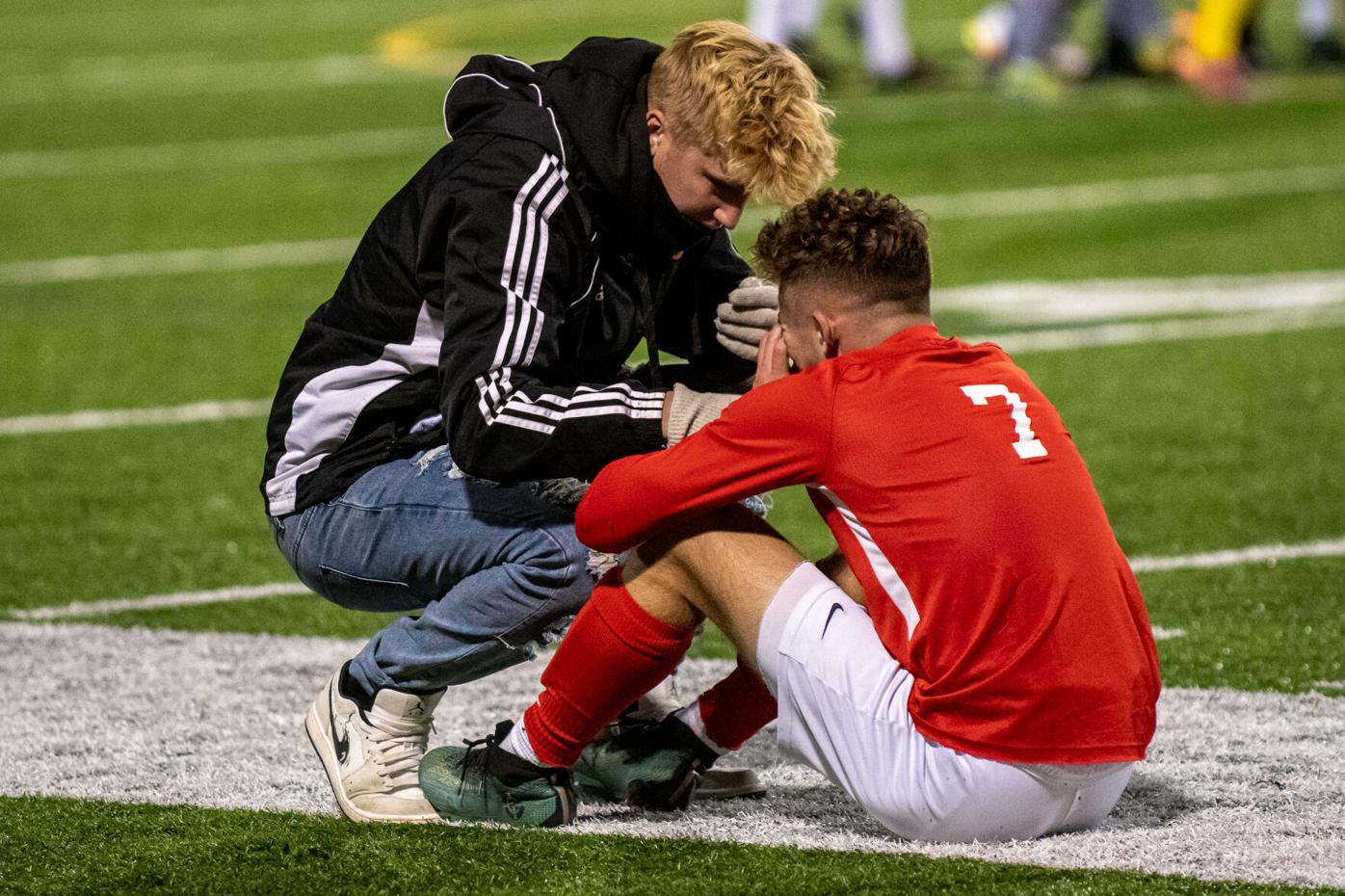 A Liberty assistant coach comforts senior Tate Byrum after a 1-0 loss to Fairview on Oct. 27 during a Class 5A state playoffs game at District 20 Stadium. 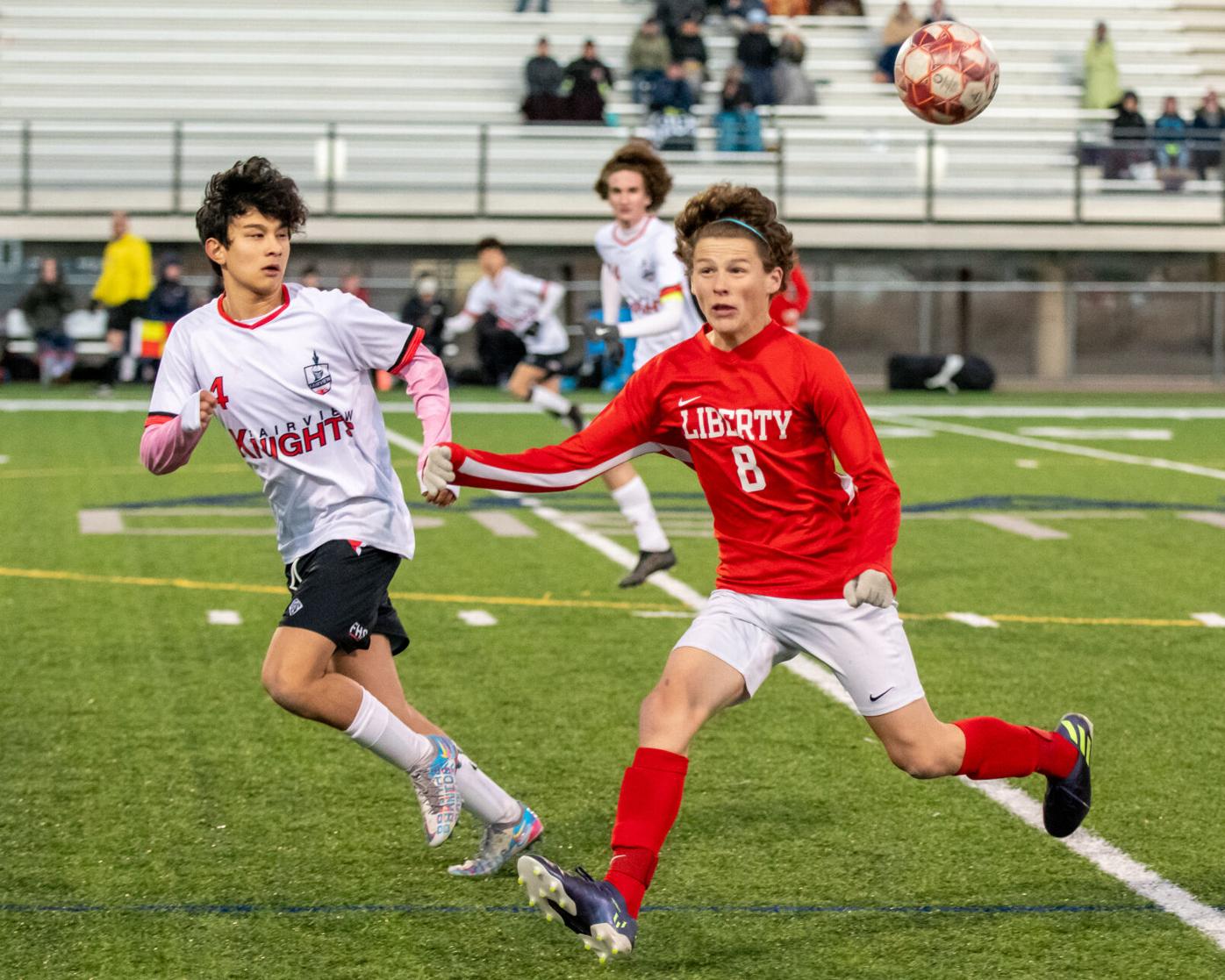 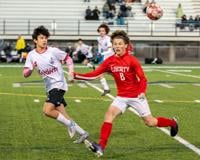 Liberty sophomore Caden Hickox heads the ball against Fairview senior Matan Huh in the first half of a Class 5A state playoffs game at District 20 Stadium in Colorado Springs on Oct. 27.

A Liberty assistant coach comforts senior Tate Byrum after a 1-0 loss to Fairview on Oct. 27 during a Class 5A state playoffs game at District 20 Stadium.

Liberty sophomore Caden Hickox heads the ball against Fairview senior Matan Huh in the first half of a Class 5A state playoffs game at District 20 Stadium in Colorado Springs on Oct. 27.

For 78 minutes and 31 seconds, Liberty controlled its playoff matchup against Fairview — the same team that knocked it out in the state semifinals last year before going on to win a state title.

With 1:29 left, the Lancers defense had pushed up, trying to help finally get the clinching goal. Darting past them was Fairview senior Layne Weeks who nailed the back of the net past the outstretched hand of Liberty goalkeeper, senior Kole Anderson.

With under a minute left, the Lancers nearly tied it, but the ball sailed over the crossbar, much like it did the entire game. They fell to the Knights, 1-0 in the first round of the Class 5A boys' soccer state playoffs on Oct. 27.

Liberty, in the final moments of the first half, hit the crossbar twice and missed the edge of the goal four times. It was only a portion of the near-misses. In the second half, too, they had back-to-back corner kicks and weren't able to convert.

"I could sense the urgency, they wanted to get it to finally go," coach Chaz Woodson said. "The Fairview keeper had an amazing game. He made some amazing saves and we just couldn't find the back of the net."

On multiple occasions, he had open shots that fell prey to inaccuracy or Williams' mitts. Against a different team, he may have had a hat trick. Against a defending state champion, the inches of separation didn't go his way.

"We kept getting just so close," Hickox said. "We kept gaining momentum. We wish we could have a couple back, but that's just how it goes sometimes."

Senior Corbin Troncosco, the team's second-leading scorer, was even subbed in for the second period's final stretch to provide a boost. He too registered multiple shots on goal, but was unable to get it past Williams.

After the game, Woodson spent shifts comforting players, as did his assistants. The possession time, shots on goal and momentum all went Liberty's way.

The season, in general, went the Lancers way. They went 14-1 in the regular season and allowed only 15 goals in 15 games. For his efforts, Anderson was once again a stone wall in his now-final game.

In the locker room, the conversations were about the bright sides. The league title was one and the aforementioned, near-flawless record was, too.

Woodson didn't want one defeat to cloud the memories of the season — especially the good ones.

"We won a really tough league," Woodson said. "We're proud of ourselves and we're building a program — building step-by-step each year. We were hoping to go a little farther, but the boys are still amazing. They have tons of heart and they're hard workers."

Denver is again seeking to become the center of the sports universe.