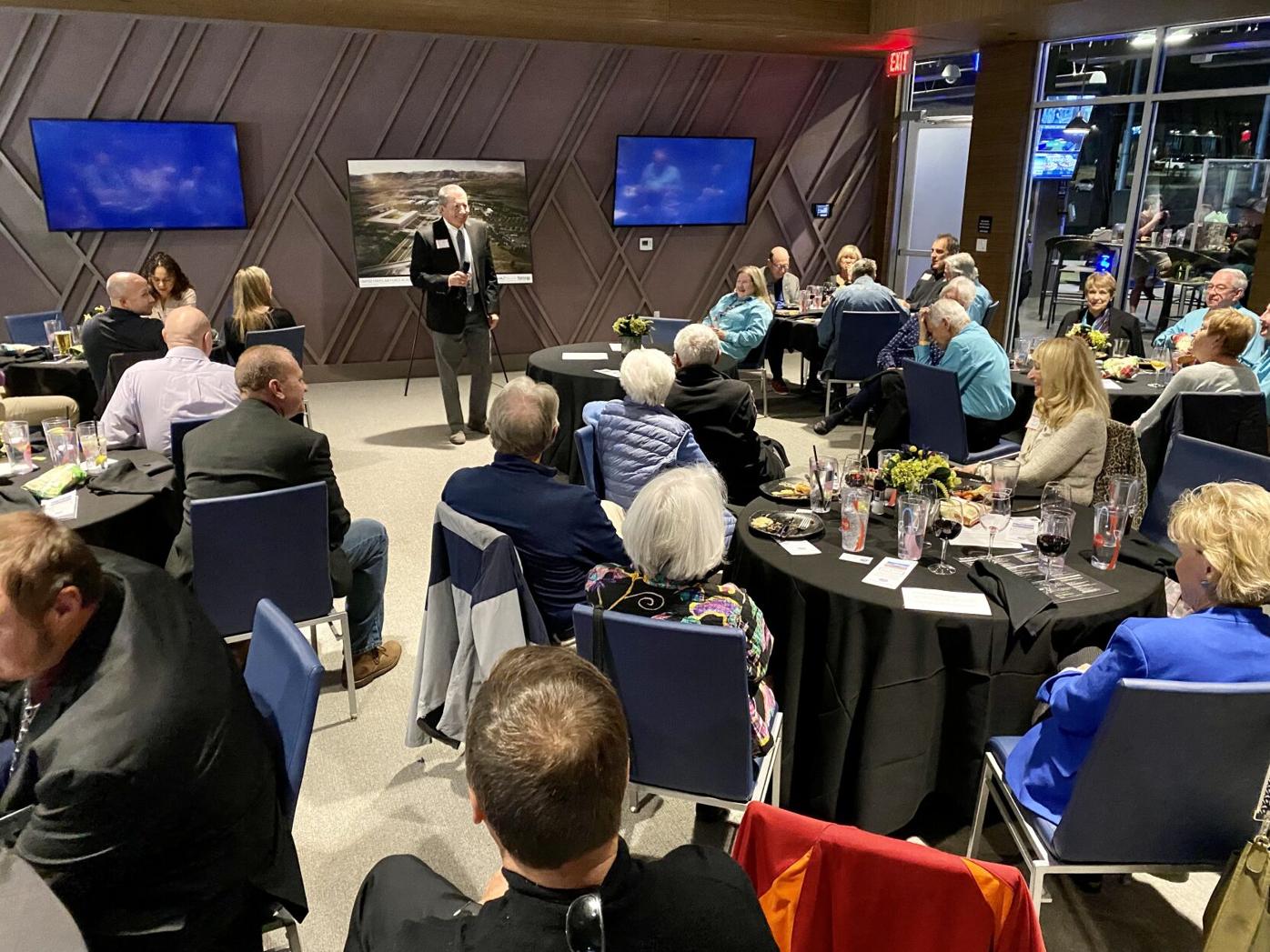 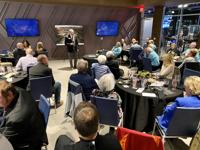 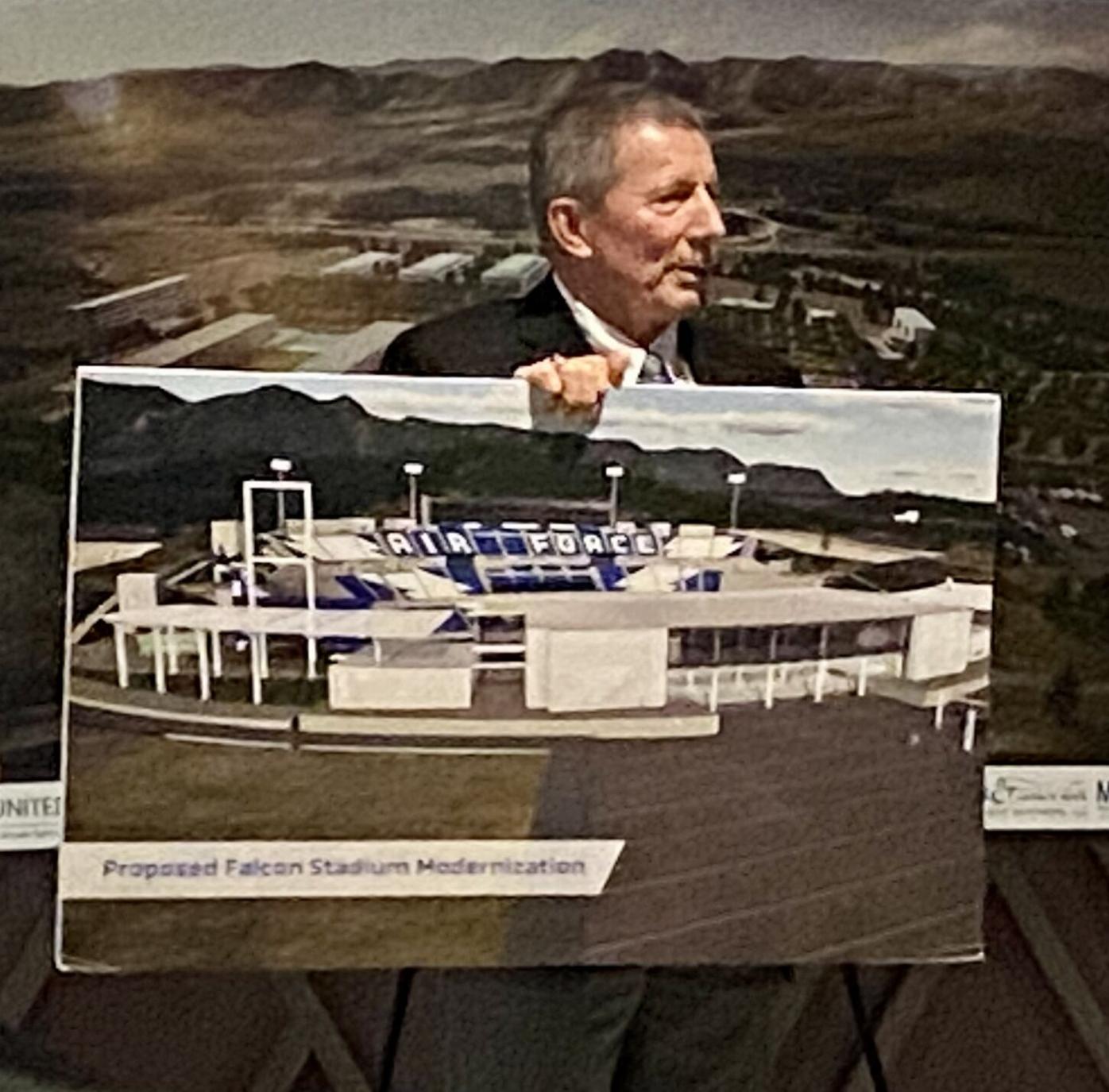 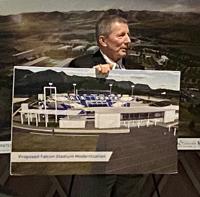 Lt. Gen. Michael Gould (ret.), director of the Air Force Academy Foundation and the Association of Graduates, displays a design for renovations of Falcon Stadium, one of several projects the foundation is pursuing for the AFA, its cadets and the Front Range community.

Editor's note: This article has been updated to reflect that Lt. Gen. Michael Gould is the CEO of of the Air Force Academy Foundation and Association of Graduates. Additionally, a previous version of the article incorrectly stated Falcons Stadium had not been upgraded since it was built in 1962, when in fact the stadium has had multiple upgrades since that time, according to the Foundation.

COLORADO SPRINGS • The landscape of the U.S. Air Force Academy will see many changes over the coming months and years, says one of its former superintendents.

The academy’s 18th superintendent, Lt. Gen. Michael Gould, spoke at a recent event held by Gleneagle Sertoma, a service club whose purpose is to meet local community needs through volunteer service. At the Oct. 28 event at Topgolf in north Colorado Springs, Gould’s presentation on current and planned major infrastructure projects at the academy was the main attraction.

Gould, who is CEO of the Air Force Academy Foundation and Association of Graduates, spoke about how the organizations are working toward enhancing the academy and resources for its cadets with major infrastructure projects. Gould, who served as an advisor to President George H.W. Bush, served as the academy’s superintendent for four years and after his retirement, the Foundation asked him to return as its director.

The Association of Graduates is the alumni association of the academy and the AFA Foundation is its fundraising arm. They are separate organizations which have not gotten along really well in recent years, Gould said.

“Our task now is to bring these two groups together to serve the needs of the graduates so they develop that affinity and the memories of what that school did for all of us,” he said. “Our mission is to gather the flock and reconnect them with the school.”

One of the many Foundation projects Gould described was a six-phase initiative to renovate and modernize Falcon Stadium, built in 1962. Gould said attendance at games at the stadium has been down in recent years, but support for the cadets should be felt from the community up and down the Front Range. He said the facilities don’t have the modern amenities families expect when they plan to spend their entertainment dollars.

This project will take a large amount of fundraising and incur some debt to the athletic department, Gould said, but the return on investment is projected to support cadet activities.

“It’s not just the football, guys. It’s the whole show, from the parachutes to the cheer team, the pep squad, the drum and bugle corps,” he said. “Those cadets have earned that respect, and that’s why we are going to show it for them by renovating that stadium.”

Another project, which broke ground in August, was a state-of-the-art Center for Cyber Innovation, which Gould said should be completed in about 18 months. Cost of the project is about $60 million, almost half of which was raised by the Foundation in matching funds. The initial funding came from government construction funds.

Also in the works is a facility designed to be the home of the U.S. Space Force Academy. Gould said the current superintendent, Lt. Gen. Richard Clark, said the academy needed a “place for space” to ensure the SFA is built in Colorado Springs. Architects have gotten involved to create a design and a vision for the facility, he said. At the moment, the project is solely in the early planning stages, consisting of just a powerpoint presentation and poster board. However, private citizens have expressed interest in aiding its construction funds.

“We want to make sure the Space Force Academy is right here across the street,” he said. “We have close to $16 million in not pledges, but offers to help with this. This will become a reality.”

Lastly, Gould presented plans for a new AFA Northgate Visitors Center, complete with a four-star full-service hotel, retail and office space, and a visitors center with a flying wing-shaped roof.

“Every superintendent at the academy since 2001 has said we need a visitors center out by the interstate, where traffic in the summer can see it and get in to visit it without having to go through checkpoints and having their truck checked,” Gould said.

The price tag on the project is $55 million, and Gould said it could break ground by the end of the year. As bonds go up for sale as well as a lot of interest from investment dollars, the Foundation feels there should be enough funds to begin the soil work and have the project completed by 2024, the Lt. General said.

“It’s been a very complex financial arrangement,” Gould said. “This is not one of the projects the Foundation is running but we are helping the developer along the way.”