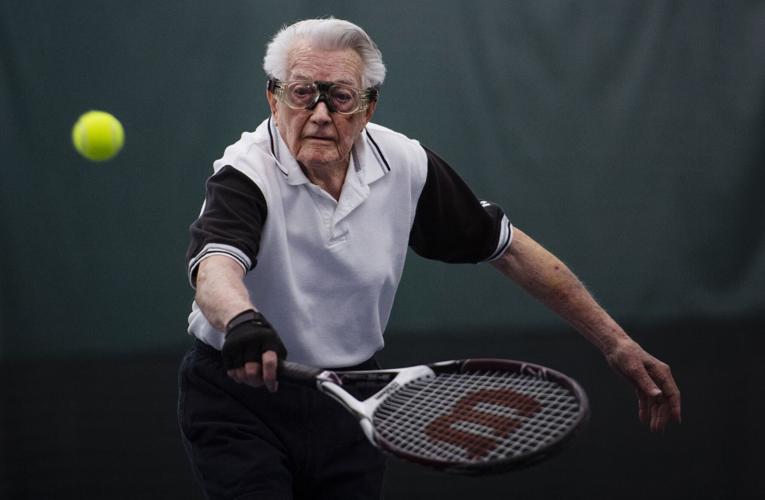 Phillip Allman, 99, plays tennis with his friends at Life Time fitness. Allman picked up the sport in 1993 and twice a week, you will find Allman on the court with his friends. 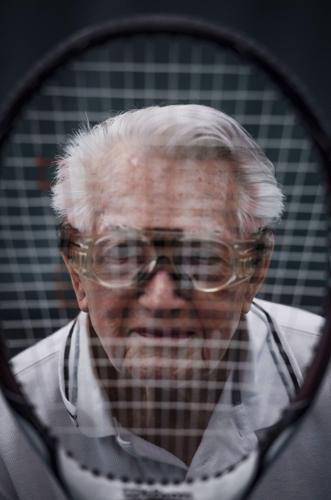 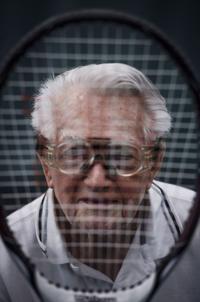 Allman poses for a portrait with his racket. 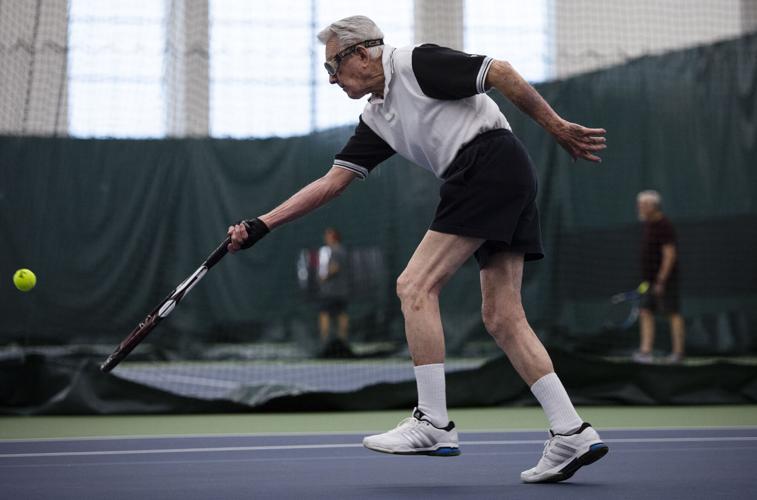 Phillip Allman Jr. is the most senior, and dedicated, of the “super” senior tennis group that meets Mondays and Fridays at Life Time fitness center in Colorado Springs. Whether Phil Allman is the oldest tennis player in the world? Cool to consider. Impossible to call. (Video by Skyler Ballar…

Age may be just a number, like points in a friendly game of doubles tennis. But competition or no, someone still winds up on top.

Ninety-nine-year-old Phillip Allman Jr. plants his sneakers behind the baseline, gives the tennis ball a few preparatory bounces, then sends it aloft. The serve lands wide, so he digs another ball from his pocket and returns to position. He tosses, swings and connects with a solid "thwank." The serve is good and a lively, four-man volley ensues.

Even now, deep into the third set after more than an hour on the court, Allman’s energy seems as unsagging as his socks.

“I’m only 81. He’s the king,” said his tennis buddy Lonnie Weaver. “When I get up in the morning and I’m feeling like I don’t want to come, I say, ‘What would Phil do?’ There’s a lot of guys who do that.”

There’s no question Allman’s the most senior of the “super” senior tennis group that meets Mondays and Fridays at Life Time fitness center in Colorado Springs. He’s certainly older than the world’s oldest competitive player, Leonid Stanislavskyi, who turned 98 last month after reluctantly fleeing his war-torn native Ukraine for Poland.

Whether Phil Allman is the oldest tennis player in the world? Cool to consider. Impossible to call.

The almost-centenarian himself is quick to point out that such a contest is no gimme. Tennis can be rough on joints and tendons, but it’s also the sport most associated with long lives. (Seriously. They’ve done studies.) That’s not why Allman plays, of course, just a sweet fringe benefit.

“I was glad to hear that. I feel like it’s a good part of my longevity,” he said. “That, and a good family, wonderful son and daughter; good friends, good career … and always keeping the mindset that you can do it. That’s been my motto: You have the ability to triumph.”

Allman’s not just talking about tennis, a sport he took up at age 70. Triumph, he’s learned, comes in many forms. It’s not about winning so much as perspective. Better yet, retro-spective.

“I’m not a champion. I haven’t done all these great things,” Allman said.

Others would, respectfully, disagree.

Allman is a retired lieutenant colonel, who served in the Navy during World War II, and the Army during the Korean and Vietnam wars. In the detentes between, he used the GI Bill to earn his undergraduate, graduate and doctoral degrees and, after retiring from service in 1969, was a high school principal and taught at colleges in multiple states, including Pikes Peak Community College.

“This guy’s got stories, if you have three hours to sit down and listen,” Weaver said. “Tom Cruise said he’d play him in the movie. It’s a blockbuster.”

He’d always been athletic, but other than a bit of boxing when he was a young man, and volleyball when he was in the service, those things never included recreational sports. Until he retired from academics, there simply wasn't time.

“I played a little with my son, just hitting balls to get him started in tennis, as well as one of my grandsons. So I could at least hit a tennis ball,” Allman said. “But I’d never played in any kind of organized group before.”

His son is now 75 and a top-ranked senior player in California.

His grandson went on to earn a full tennis scholarship to Cal Poly Tech.

Tennis-love took a bit longer to grow roots in the man who casually introduced them to the sport.

Allman remembers the day he took his first doubles tennis lesson, April 1, 1993, at the former Lynmar Racquet Club, where a tennis group for seniors was just starting up.

The club was absorbed by Life Time in 2011, and the group began playing on the brand-new indoor courts at the massive complex in northeast Briargate.

Except for a handful of occasions, when Allman had medical issues that forced him to forgo play, he’s done so at least twice a week for almost three decades. He’s the only OG currently still actively playing with the group, and the only one in his 90s.

“I never participated in real competitive-type tennis, and there are a number of people in my group who have,” Allman said. “In that regard, even though I’ve been with it for 30 years, I’m kind of a junior.”

When his wife of 74 years, Daisy, died in 2019, the connections he’d made through tennis became an even more important part of his life.

“Tennis has kept him going, not only because of the athletics — it’s strengthening, it’s flexibility — but also the socializing with other people,” said Allman’s son-in-law Jeff Hale. “It’s been an increasing part of his life, as other friends have passed on and he’s gotten older, he has felt more and more that tennis has helped keep him going.”

What Allman immediately loved about the game back in 1993 — the exercise, the inspiration, the camaraderie — is what he still loves about it now. But like all epic romances, the relationship has matured over time.

And there are two sides.

“Everybody knows him, just because he’s Phil. He’s our guy. He’s our inspiration, and he’s the nicest guy ever,” said Sandie Trupp, who leads the tennis desk at Life Time.

Allman, she said, embodies what she loves about the game, body and spirit.

“I love seeing people that just are inspiring, and he’s one of them,” Trupp said. “I’m not sure what special things he possibly does, I can’t imagine, but he just keeps going. We can’t wait to celebrate his 100th.”

That party's scheduled for January 2023. Until then, we’ll leave you with some words of wisdom from Phil Allman, the oldest tennis player we’ve ever met:

Have a good life. Triumph. And "learn how to play tennis.”

The 104-year-old is one of several from the “greatest generation” who are planning to be at The National Museum of World War II Aviation in Colorado Springs at noon Saturday.