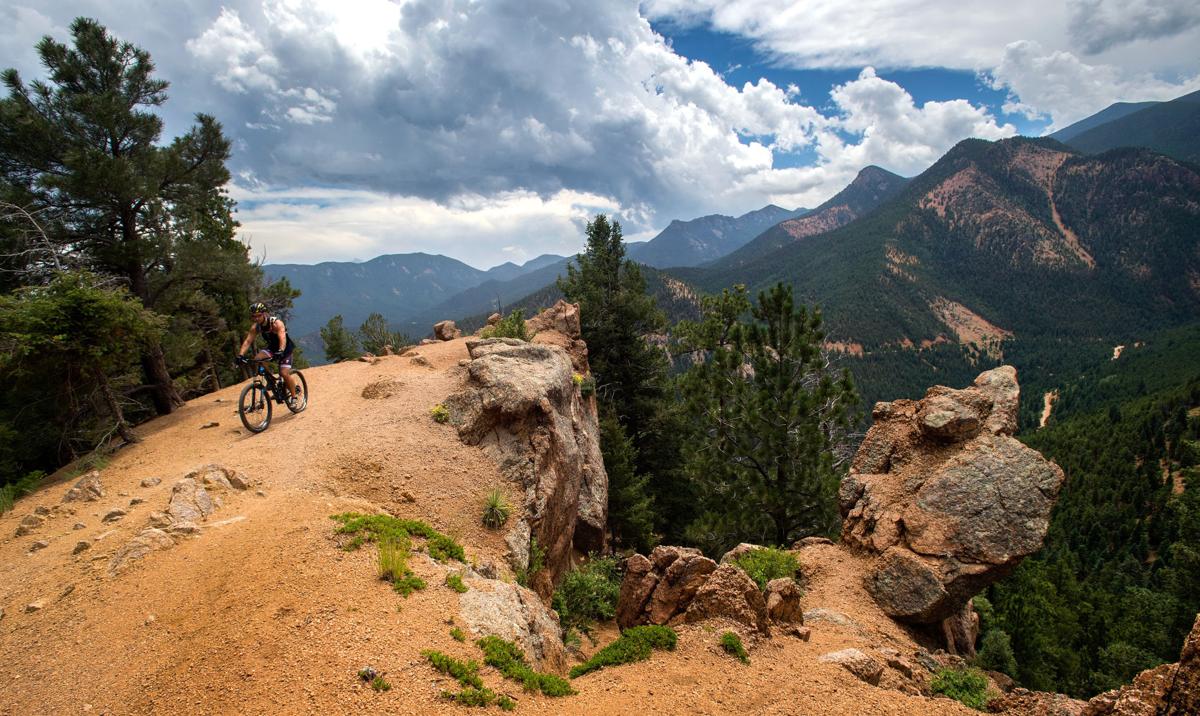 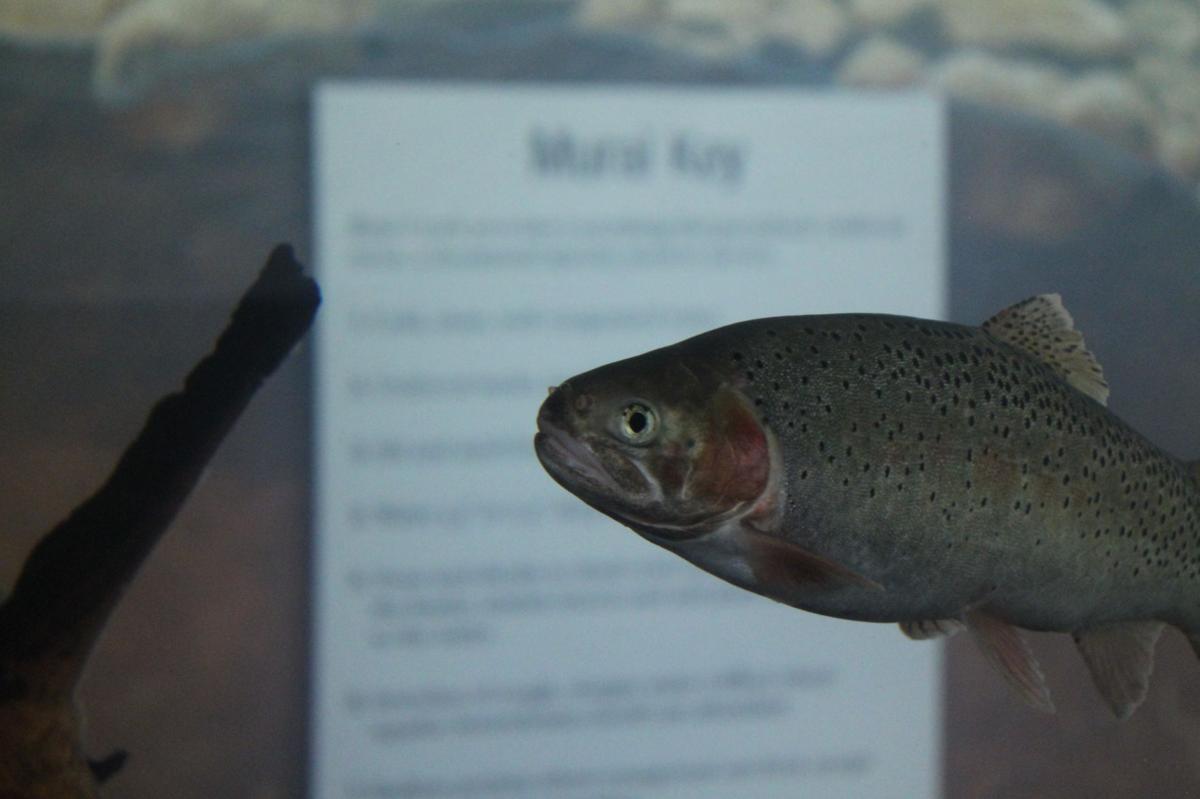 A greenback cutthroat trout swims in its new aquarium at the Bear Creek Nature Center. The water, kept at a frigid 45 degrees, is constantly circulated to keep the water clean and to mimic the natural current the fish would have in the wild.

A greenback cutthroat trout swims in its new aquarium at the Bear Creek Nature Center. The water, kept at a frigid 45 degrees, is constantly circulated to keep the water clean and to mimic the natural current the fish would have in the wild.

Nearly two years after the U.S. Forest Service wrapped up much-debated trail reroutes in the Bear Creek watershed in Colorado Springs’ southwestern mountains, the agency is under fire again, with the Center for Biological Diversity threatening a lawsuit over “ongoing failures” to protect the home of the greenback cutthroat trout.

The center’s 2012 lawsuit prompted the lengthy initiative, which ended with stakeholders in 2017 receiving a government award for “collaborative/integrated aquatic stewardship.”

But now, the center deems landowners are again in violation of the Endangered Species Act in the popular recreation area known as Jones Park.

“Specifically, the Forest has failed to abide by its own Proposed Action to relocate motorized Trail 667 out of Bear Creek’s Water Influence Zone,” reads the letter of intent to sue. 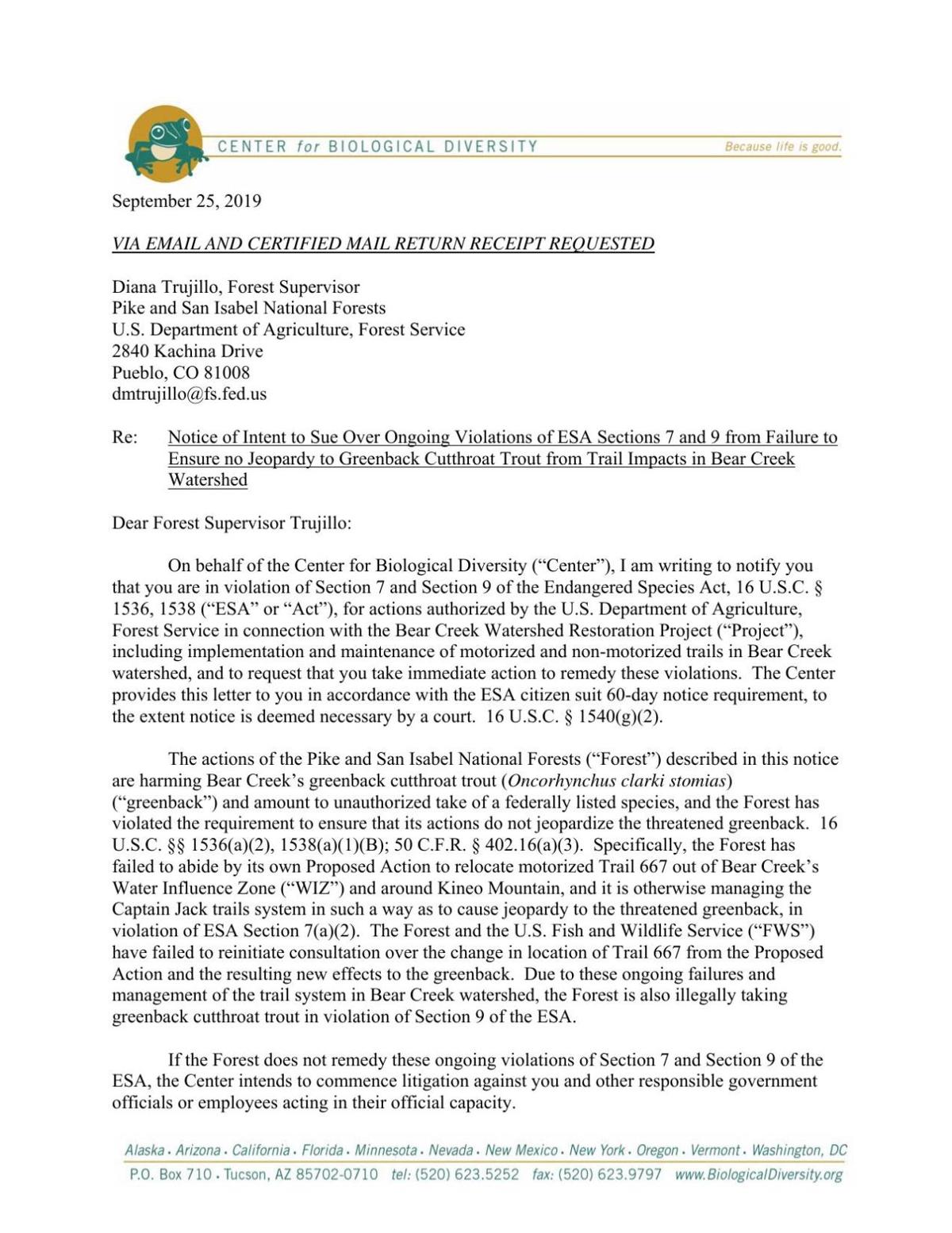 Trail users could be kicking down sediment, the center says, causing pile-up in the stream and smothering trout eggs and emerging fry.

Forest Service officials did not respond to a request for comment. Though the letter was not addressed to El Paso County, it was conveyed the land after the project, and “there is still threat of legal action,” said Tim Wolken, the county’s director of Community Services, in an email.

The county “would appreciate reviewing any scientific data generated by the center indicating water quality concerns,” Wolken said. “This will be helpful in determining next steps.”

“The long, thoughtful process that resulted in the rerouting of several popular trails in Jones Park represents a balance between preserving Bear Creek fish habitat and allowing reasonable recreational outdoor access for all users,” the statement read.

For years during the Forest Service’s analysis and reroute negotiations, motorists were barred from the singletrack closest to town. Now roaming the realigned Trail 667 on the north side of Kineo Mountain, they are “the crux” of the center’s concern, said the organization’s attorney, Margaret Townsend.

“If it was just a footpath or even potentially a mountain bike trail, it could have some impact, but not necessarily the same impact a motorcycle trail is likely to have,” she said in a phone call. “Of course we want folks enjoying the forest, and where the trail was going to be originally, that location wouldn’t have affected the greenback.”

Originally, 667 was to skirt Kineo Mountain’s south side. “What we wanted to do here was come clean,” Pikes Peak District ranger Oscar Martinez told interested parties at a meeting in August of 2016.

He said the Forest Service’s hired hands with Trails Unlimited had stalled on that slope, finding it too steep and rocky, as some onlookers had predicted, feeling ignored. The trail would have to go north, the Forest Service determined — resulting in an extra $50,000 on top of the $396,820 project cost, records show.

But records do not show how the move may or may not have impacted the trout, the Center for Biological Diversity claims. Its letter reads: “there is no readily available evidence indicating that the Forest (Service) has taken steps to ensure no jeopardy to the greenback from the current trail system.”

But to Allyn Kratz, president of the local chapter of Trout Unlimited, the evidence is “overwhelming,” and not in the favor of conservation.

He said he raised concerns about the trail before it was built, noticing at least eight “ravines” on the mountainside while hiking the flagged route — “ravines created by water,” Kratz said, “and the water obviously went to Bear Creek.”

He said he was told Trails Unlimited would address this. But he was unsatisfied in the end and remains so.

That would be widely unwelcome among user groups, including mountain bikers. They have, though, expressed dismay with the new trail beyond the perceived fun that was lost.

“We’ve got some concerns with upkeep; the trail’s not holding up the way it was sort of advertised,” said Cory Sutela, with Medicine Wheel Trail Advocates. “But it’s also pretty far from the creek.”

He’s no biologist, he said. “I’m a mechanical engineer, so I look at it technically, and it looks to me like sediment shouldn’t be able to get from the trail to the creek.”

Without action in 60 days, the Center for Biological Diversity said it intends to pursue litigation in U.S. District Court.

Utah has claim to largest aspen clone, but maybe it's in Colorado