If another wildfire should spark in the western parts of Colorado Springs, some residents are asking how long it might take them to get out in an evacuation.

"We have built so deep into the (wildland urban interface) we have to ask: Have we made it inescapable?" said Walter Lawson, a Broadmoor area resident.

Residents are calling for a computer simulation of the city's evacuation plans similar to those done in other communities, in part, because the city may allow 400 new apartments along Garden of the Gods Road.

Residents are also generally concerned that more people have moved west of Interstate 25 since the Waldo Canyon fire in 2012 and that could make evacuation times longer.

During the Waldo Canyon fire some residents fleeing from Mountain Shadows and other neighborhoods feared the fire would kill them in their cars, as they have told City Council on several occasions during hearings over the Garden of the Gods apartments.

Colorado Springs City Council directed city staff in June to re-evaluate a traffic study and address safety concerns about evacuation raised by the neighbors. When asked how the staff planned to evaluate safety concerns as directed by council, the city staff told The Gazette it couldn't be done.

Council President Tom Strand said he has also heard from city staff that completing an evacuation model can't be done and he is planning to ask the city staff to explain their position publicly.

Fire danger around Colorado Springs in 2021 higher than average year

"I will request a work session to know exactly why it can’t be done," he said.

Fire Marshal Brett Lacey said models cannot capture all of a fire's potential behavior because changes in wind, weather and other factors make them so unpredictable.

"In a wildfire it’s so dynamic you can’t do a reasonable model," he said.

A model could give residents a false sense of security, he said, adding that knowing the potential times of evacuation might not be particularly useful.

"There is good out of modeling and bad out of modeling. … I feel like our plans are robust enough," he said, noting that while it was scary, everyone who evacuated during Waldo Canyon got out, even if they were stuck in traffic for hours.

"I am flabbergasted when they say they can’t be done," said Robinson, a modeling expert.

Robinson consulted on wildfire evacuation studies for California communities with a private company and found many assumed their evacuation plans could work without modeling them in real life or using a computer simulation.

Some think a simulation is just an animation of what the simulator thinks will happen, he said. But, in fact, validated simulations use the same algorithms employed in transportation engineering. He said one city emergency manager discovered how badly his evacuation plan could fail using a simulation.

To be effective, evacuation simulations need to be run many times to account for as many variables as possible, such as roads becoming one-way only to get more people out and unexpected road closures.

Ideally, Colorado Springs could model how fires are likely to behave based on prevailing winds and the locations of fire fuels, such as heavily wooded areas, and then use that to model to inform and evaluate traffic evacuations, Robinson said.

"Believing that all will go well because plans can work is short-sighted. I don’t know of any evacuations that go as planned. Vehicles break down, drivers don’t show up, trees fall across the road, smoke drastically reduces visibility (and safe speeds)," he wrote in an email.

Robinson's work in California showed him that many small towns could not afford to do the evacuation simulations they needed, and so he started working with his team on modifying the existing free online software to make it easier for communities to model evacuations from flash floods and wildfire. The existing software calculates evacuation times that were within 15% of real world times, he said. It can also identify intersections that would experience delays

The updated free software, known as Fast Local Emergency Evacuation Times, or FLEET, is expected to be completed by spring, although it is already available for use. Robinson's office provides training via teleconference on the software as it is now, he said. No one profits from the software, which is paid for by the Department of Homeland Security, the U.S. Army Corps of Engineers and the Virginia Department of Emergency Management.

Other options for modeling evacuations exist and can provide more detail, although they require more training and can be expensive, he said.

Dana Duggan, a westside resident, said the city should want its evacuation traffic modeling to be updated using the most cutting edge tools.

"To me it’s stunning that the last full scale traffic evacuation modeling simulation is 11 years old," she said.

The Pikes Peak Area Council of Governments completed the last traffic study that analyzed road capacity from different districts of the city, but did not report clearance evacuation times, which is the the time it would take to get out of an area and the critical metric, she said. 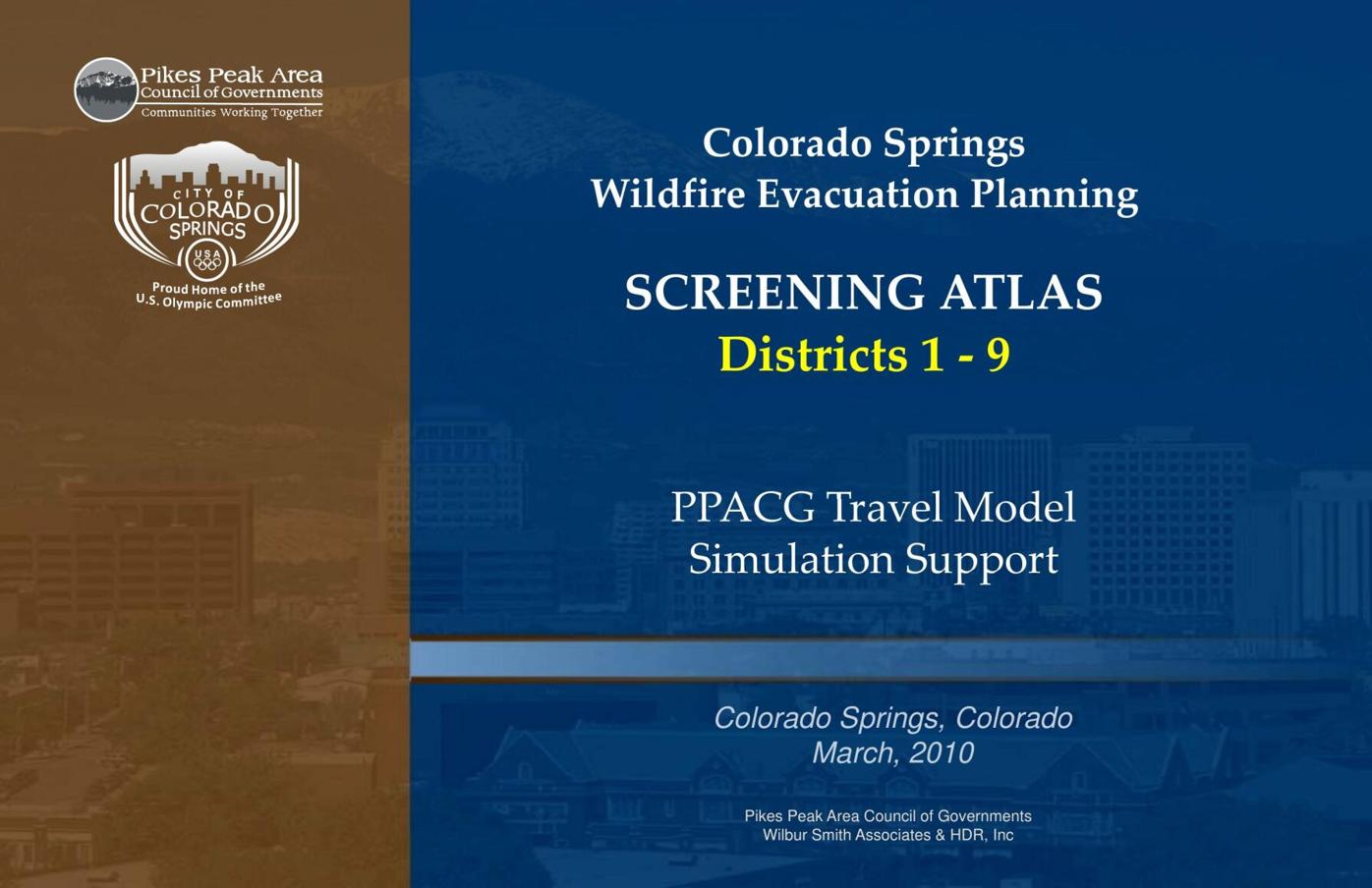 Fire marshal Lacey said the study confirmed emergency managers' expectations based on their experience. For example, emergency managers know that the roads that wind through the Broadmoor area on the southwest side of town are not as ideal as the road network in the newer northwest of town. The city has modified its evacuation plan for the southwest side of town to make the evacuation zones smaller because if larger areas are evacuated all at once it could create congestion, he said.

"People need to understand where they live and be prepared," he said.

Evacuation drills are more useful than models because community behavior is the big wild card in an evacuation and the drills provide important education and practice for residents, he said. The city has held seven evacuation drills since 2011 but he said it's tough to get the community to participate in those drills.

He also said that residents don't need to wait for an evacuation to leave their homes if a wildfire is burning on the west side and they feel uncomfortable. People need to be responsible for themselves particularly if the emergency notification system went down and no one can be formally notified.

When asked if evacuation risk could be a standard used to evaluate new development, city spokeswoman Kim Melchor said evacuations are unique and situational and so there is no objective criteria to use.

Broadmoor area resident Lawson said the council is the governing body that could make safety criteria for new developments to follow if they choose, instead of saying that none exist. The city is currently rewriting its zoning code that governs development.

"There is a bit of insanity," Lawson said, of the city's claim it can't hold development to safety standards.

Tens of thousands of new homes in the most wildfire-prone parts of Colorado came with out-of-date protection plans.