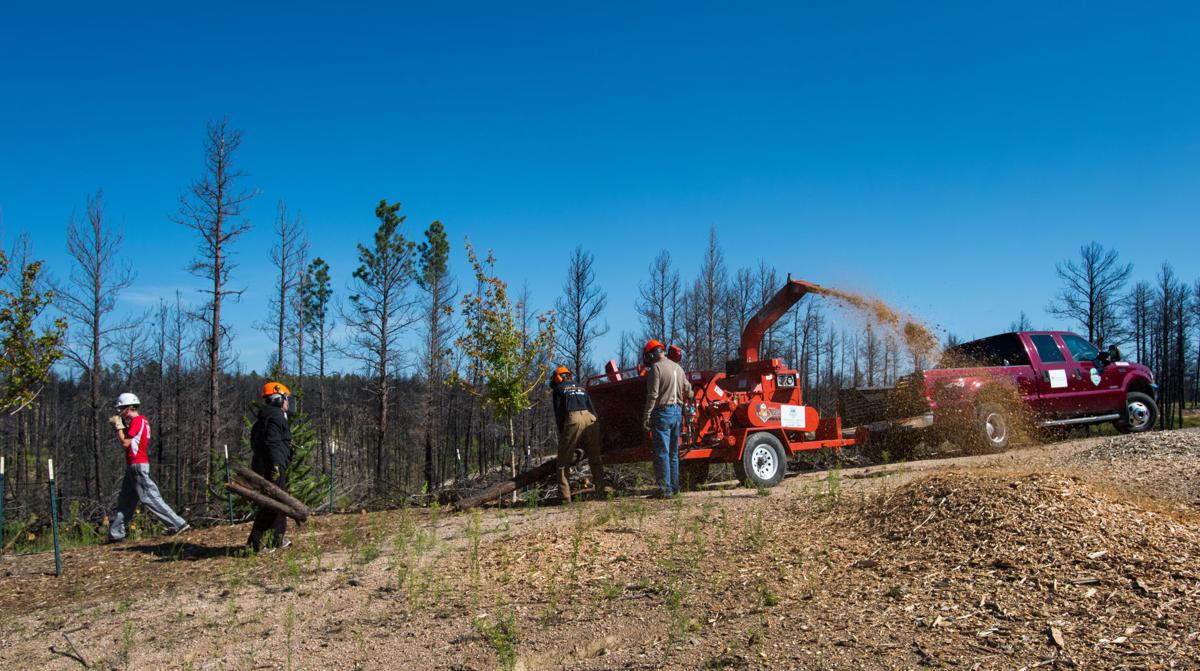 Volunteers for Black Forest Together make mulch Tuesday, Aug. 18, 2015, from the burned trees on Brian and Sherri Little's property in Black Forest. The non-profit group has a long list of projects on private property and is looking for volunteers to help. ( The Gazette, Christian Murdock) 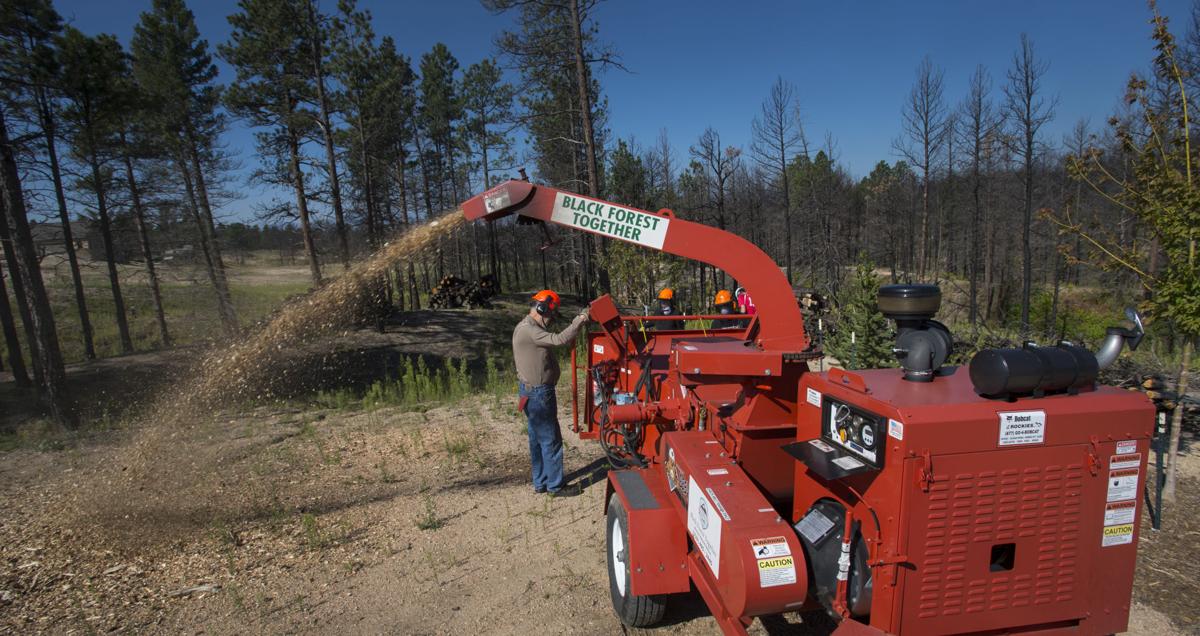 Cal Lidderdale runs the wood chipper as volunteers for Black Forest Together make mulch Tuesday, Aug. 18, 2015, from the burned trees on Brian and Sherri Little's property in Black Forest. The non-profit group has a long list of projects on private property and is looking for volunteers to help. ( The Gazette, Christian Murdock)

Volunteers for Black Forest Together make mulch Tuesday, Aug. 18, 2015, from the burned trees on Brian and Sherri Little's property in Black Forest. The non-profit group has a long list of projects on private property and is looking for volunteers to help. ( The Gazette, Christian Murdock)

Cal Lidderdale runs the wood chipper as volunteers for Black Forest Together make mulch Tuesday, Aug. 18, 2015, from the burned trees on Brian and Sherri Little's property in Black Forest. The non-profit group has a long list of projects on private property and is looking for volunteers to help. ( The Gazette, Christian Murdock)

As Sherri Little surveyed a group of volunteers toiling in her Black Forest backyard on Tuesday, a Bible verse came to her mind and brought tears to her eyes.

"Pity the man who falls without someone to pick him up," she said.

Little's eyes fill with tears easily when she thinks of her life since the Black Forest fire in 2013. But they are not tears of sadness, although both she and her brother lost their homes to the fire, and along with them, all of their inherited family treasures. Instead, Little cries over the blessings she counts - and among them are hordes of neighborhoods, friends and random people who helped clear thousands of dead trees off the Little's property on Trapper's Pass Trail.

Volunteer power has become the cheapest, and for many residents the only, way to remove the black sticks that cover neighborhoods in the forest. Property cleanup can cost thousands of dollars, a price that many residents can't afford to pay. The problem has been compounded by a lack of government and private funds that can be put toward taking down dead trees specifically, said Nancy Trosper, who works on securing grants for the nonprofit Black Forest Together.

"The bottom line is that we don't have public funding and we don't have private funding for the cleanup of the blackened trees," Trosper said. "The results are we have timber that is going to decay and lose its useable life. Then it's becoming a safety issue at that point."

Black Forest Together, the organization shepherding fire recovery, is working to bridge the gap between homeowner effort and a lack of money to fund the cleanup of countless dead trees in the neighborhood. Trosper expects dead trees to begin decaying in about three years, then they will no be longer viable lumber.

Worse than the loss of an economic opportunity, however, the black trees are visceral reminder of the horrors of wildfire.

While the nonprofit has grants to help fund wildfire mitigation of live trees, it has struggled to find money to eliminate dead ones. So Black Forest Together leans on volunteers. Donna Arkowski, the nonprofit's volunteer coordinator, said the volunteer weekend calendar is full until October - every weekend she has planned a project on private land to help deal with dead trees and fire debris. But while Arkowski has projects planned, she has very few volunteers, she said.

Little's property at 6309 Trapper's Pass Trail is a prime example of volunteer power.

On the first day residents were allowed back into Black Forest after the 2013 fire destroyed 488 homes, Brian Little got out his chainsaws. The Littles had worked tirelessly for years to cut back the dense pine forest that surrounded their home; despite their efforts, after the fire they were still faced with a dense forest of dead, dangerous trees.

But as the Littles got to work, they were interrupted by an onslaught of neighbors who wanted to help.

"It was 15 minutes later, and over 80 people showed up," Brian Little said.

They brought trucks and tractors, food and chainsaws. There were people the Littles knew from church, some acquaintances and even people they had never met.

"I'm sitting there bawling like a baby," he recalled.

The spontaneous swell of effort continued for months. Volunteers would show up with food and gear, ready to work every Saturday morning. By fall, they had a site cleared for rebuilding, and by August of 2014 they were in their new home.

The overwhelming volunteer effort helped the Littles remain upbeat when Sherri was diagnosed with cancer months later. But on Tuesday, as Sherri stood on the couple's porch wearing a hat to cover her nearly bald head, she was grateful that cancer had come after the fire. Her cancer is now in remission, she said.

Despite the effort to clear the Little's property, they needed the Black Forest Together chipper to devour piles of burned logs and spit them out as mulch.

"This kind of chipper is far bigger than any we could rent," Little said. The nonprofit's chipper, donated by the American Red Cross, can swallow trees six inches in diameter.

The chipping is bone-jarring and exhaustive work. Even after a full day on Trapper's Pass, the small crew would be unable to work on all the slash piles. Of all the volunteer projects on the Black Forest Together calendar, chipping is the simplest. Some projects involve cleaning up years-old fire debris, Arkowski said.

The nonprofit has been awarded grants that will keep a planning coordinator and forester on staff for another year, but those grants can't fill the need for paying crews to work on properties. Until that can be done, volunteer projects are limited to cleanup, Trosper said.

The work - from cutting down dead trees to trimming live ones - will be done in the spirit of making the forest healthy. But the neighborhood has a long way to go, while many property owners contend with thousands of dead trees on their land before they can even consider how to manage those that survived.

Little has tried to take small steps to help promote a healthier forest, even while thousands of dead trees can be seen from her living room windows. After taking down many dead trees, she planted some new ones, she said.

"We want to come back and make it a better place, hopefully," she said.