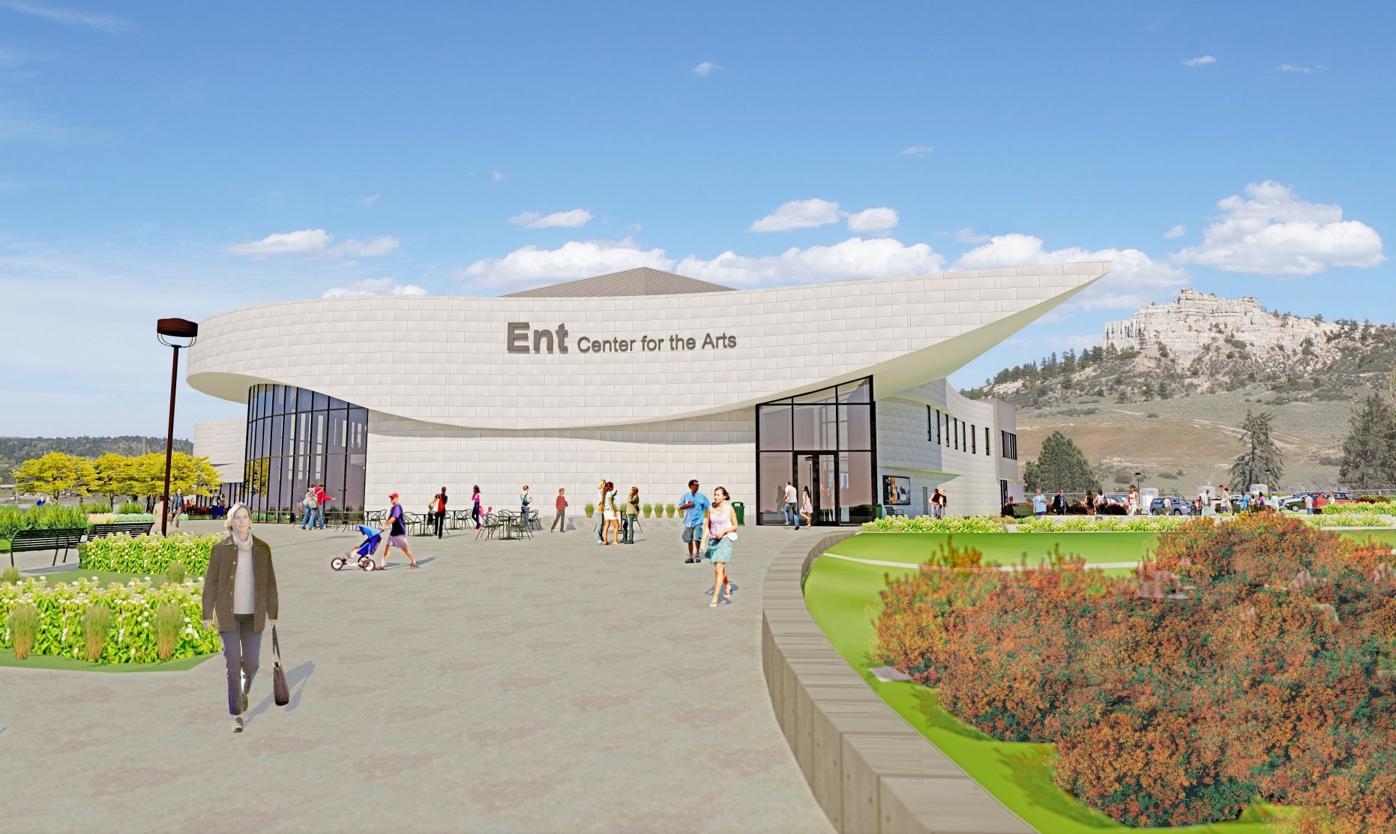 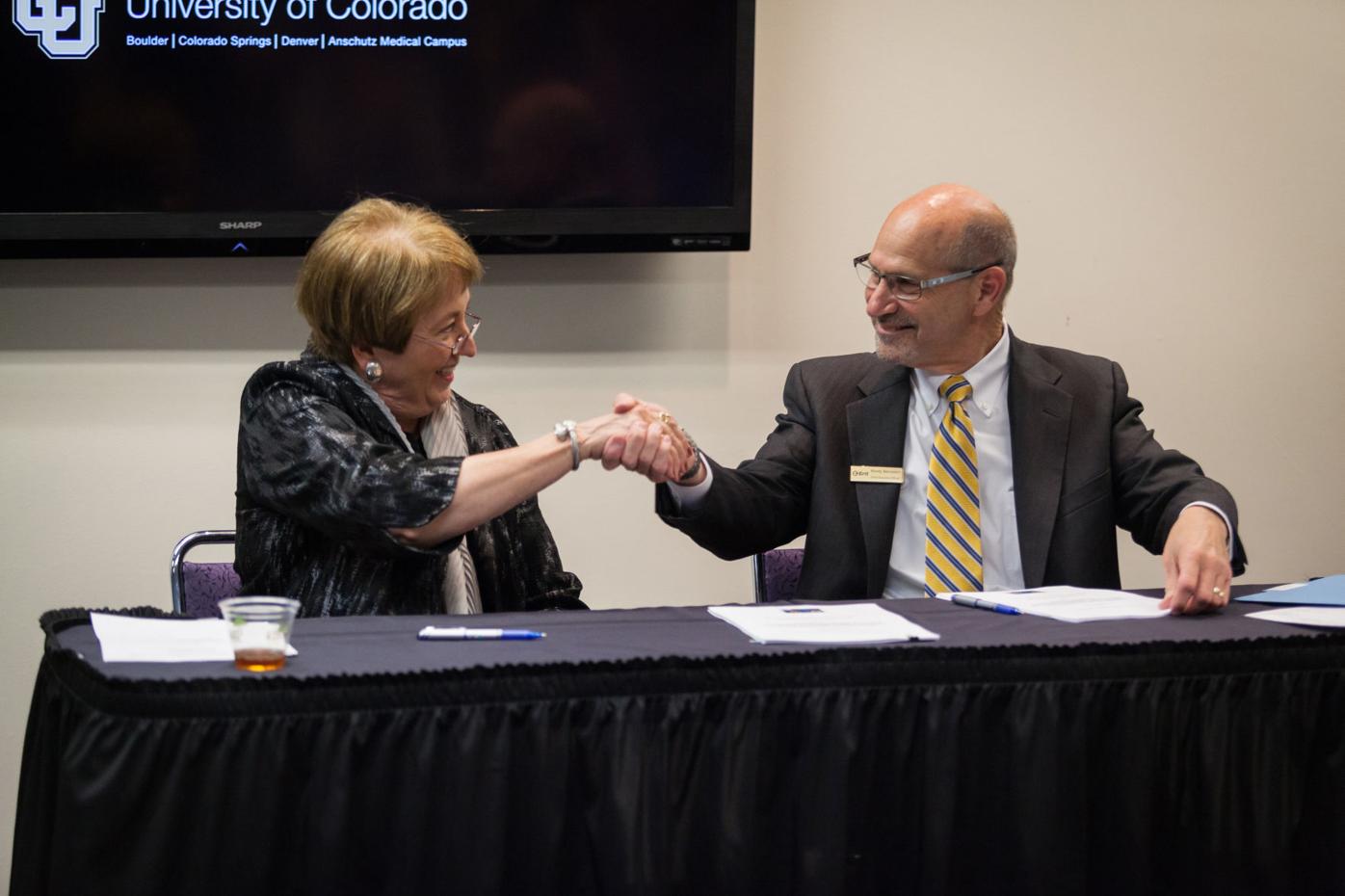 A contract signed Tuesday means a long-awaited visual and performing arts center is a go, and the revitalized North Nevada Avenue corridor will gain another destination.

Officials from the University of Colorado at Colorado Springs and Ent Federal Credit Union put their signatures on a 15-year marketing and operating agreement worth $12.6 million.

UCCS Chancellor Pam Shockley-Zalabak said the project will elevate arts in the community to new levels and "continue the revitalization of North Nevada Avenue and our regional economy."

Ent, which has 27 financial service centers in Colorado Springs, Woodland Park, Pueblo and Denver, will donate the money in installments to help pay for construction of the $60 million facility, said Victoria Selfridge, Ent's vice president of corporate communications.

"We view our relationship with UCCS as a mutually beneficial partnership that supports the strategic growth of both organizations," she said. "As a credit union, we're going to benefit from the opportunity to serve the growing population and increased awareness of Ent."

Along with Ent's contribution, the state of Colorado has committed $18 million to the project in budget appropriations from the past two fiscal years. Another request for $9.6 million is pending, UCCS spokesman Tom Hutton said.

Private donations of $10 million, along with $10 million from the University of Colorado's president's office, will help pay for the new center, he said.

As part of the deal, Ent gets naming rights; the building will be called the Ent Center for the Arts.

Construction is expected to start in August, Hutton said, on what is now a parking lot on North Nevada Avenue. The land buffers land that UCCS owns and has leased to the city of Colorado Springs, the former Four Diamonds baseball fields.

The UCCS Mountain Lion Softball Field and Stadium will continue to be in service, Hutton said, but all other ballfields have been dismantled. The land will be used to create roads, pedestrian paths and parking for the new arts center. It is scheduled to open in January 2018.

Ent also will be allowed to build a free-standing service center at Austin Bluffs Parkway and North Nevada Avenue. Construction will start in the third quarter of 2016, Selfridge said.

The 76,000-square-foot, multipurpose center will include a 750-seat main theater and a 250-seat recital hall; the university's 250-seat Dusty Loo Bon Vivant Theater, home to the UCCS resident theater company, Theatreworks; and the Osborne Studio Theater for drama and dance performances. The Gallery of Contemporary Art Education also will move to the site.

Some space will be available for community use as well, Hutton said.

"This will feed an already burgeoning Pikes Peak region arts scene," he said, "and this continued expansion will help all of us, creating an essential driver for our local economy."

In addition to establishing another cultural destination and anchor attraction on the north end of town, the project will "strengthen UCCS' existing academic offerings in the arts, enable new collaborations between the university and the broader community, and fulfill an important need for the development of a midsized performing arts venue, as identified in the region's current 'cultural plan,' " said Andy Vick, executive director of the Cultural Office of the Pikes Peak Region (COPPeR).

The agreement also extends for another 15 years the contract between UCCS and Ent that enables UCCS students and employees to have an Ent checking account and debit card as part of their university photo identification.

The Lion OneCard began being offered in 2006, and Selfridge said the program is popular - more than 4,000 students, faculty and staff use the cards on campus.