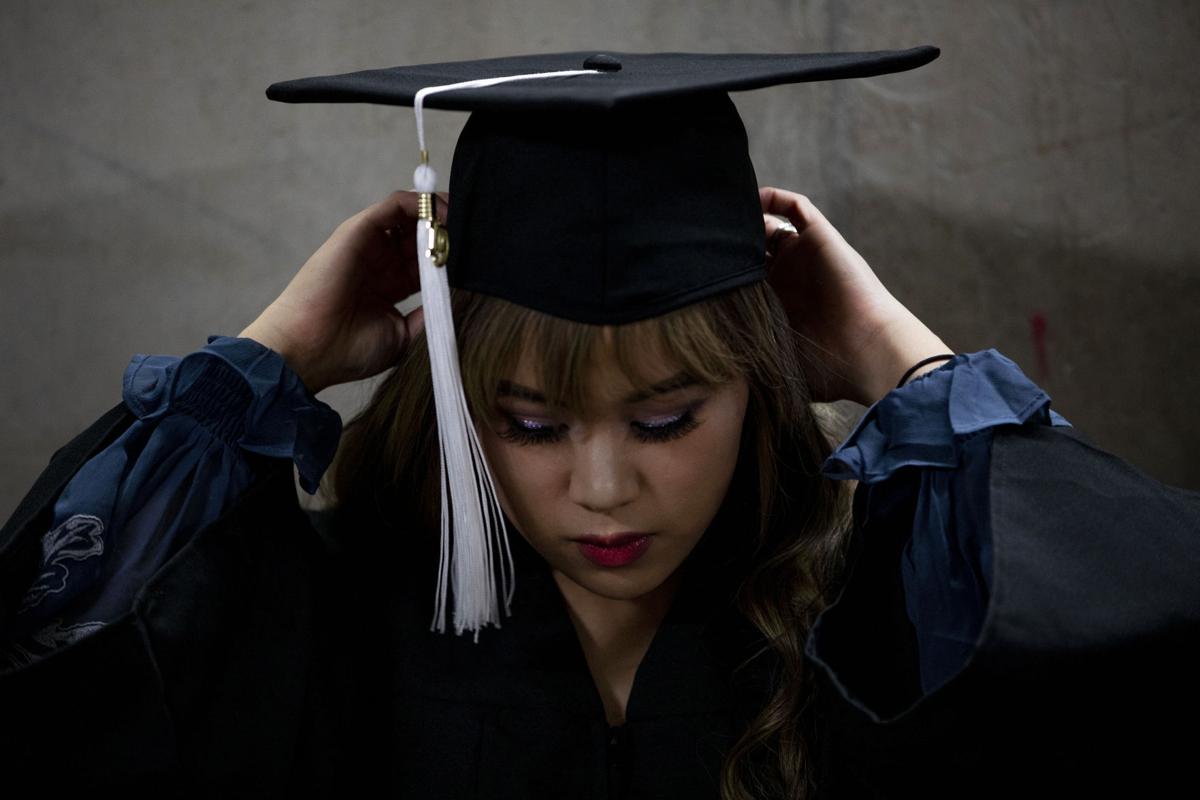 Akiko Walker, a graduate in economics, adjusts her cap in preparation for the UCCS Fall Commencement ceremony at the Broadmoor World Arena Dec. 20, 2019. Photo by Chancey Bush/The Gazette 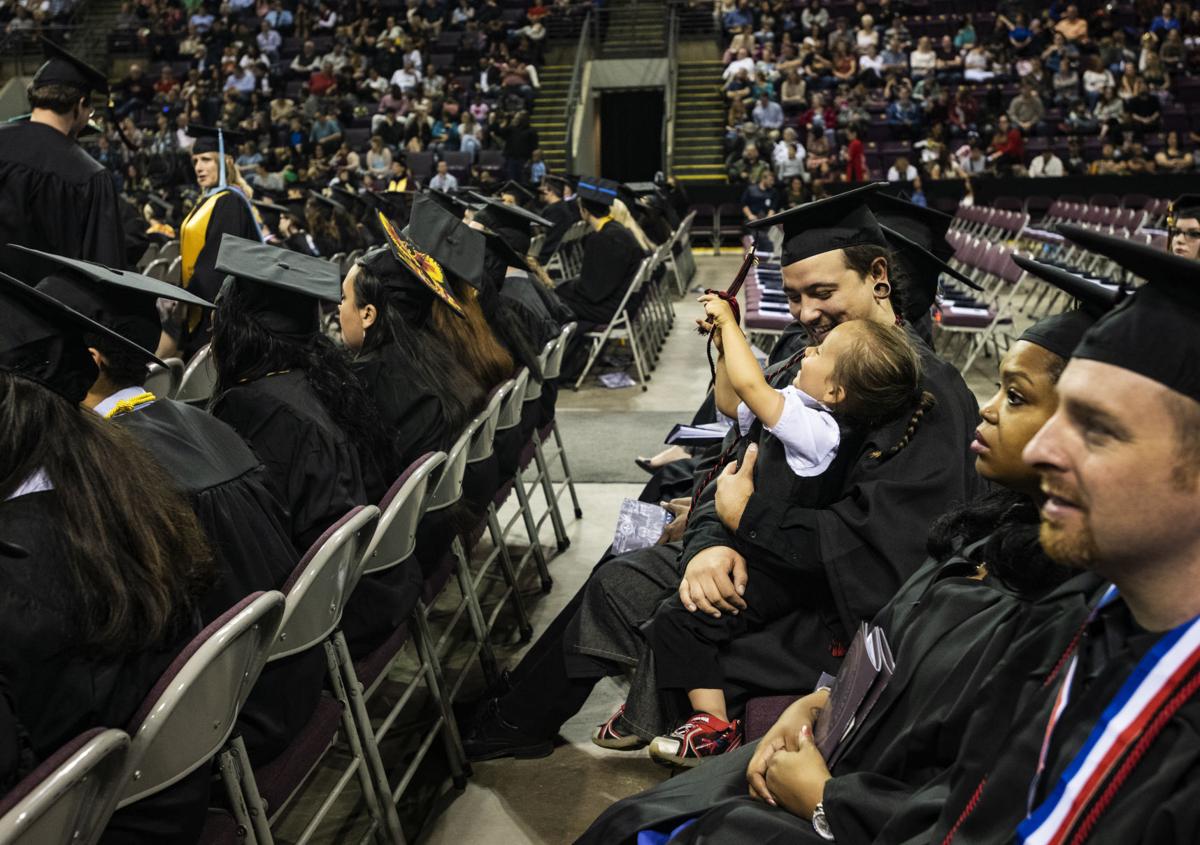 Rayman Quiales holds his three-year-old son Anthony Quiales in his lap while he waits for his name to be called during the May 2019 commencement ceremony for Pikes Peak Community College. Photo by Kelsey Brunner/The

Akiko Walker, a graduate in economics, adjusts her cap in preparation for the UCCS Fall Commencement ceremony at the Broadmoor World Arena Dec. 20, 2019. Photo by Chancey Bush/The Gazette

Rayman Quiales holds his three-year-old son Anthony Quiales in his lap while he waits for his name to be called during the May 2019 commencement ceremony for Pikes Peak Community College. Photo by Kelsey Brunner/The

Carolyn Yeager won’t be able to walk across the stage Friday to accept the first-to-be-awarded doctoral degree in clinical trauma psychology from the University of Colorado at Colorado Springs. But she will chat about the accomplishment with others in the psychology department on a video conference.

“In a way it’s cool because we’ll all get to talk about graduation instead of just doing it,” she said. “There are some gains to this whole COVID thing. But I’d be dishonest if I said it wasn’t disappointing.”

Nearly 1,600 students will graduate from UCCS Friday with bachelor's master's and doctoral degrees, and 1,088 students from Pikes Peak Community College will earn degrees and certificates on Saturday, in first-ever virtual commencement ceremonies.

Colorado College Class of 2020's commencement will be held next year

“The best time of the year is commencement, and we’re trying to replicate the ceremony as best we can, embrace it and make it look good,” said UCCS spokesman Jared Verner.

Both UCCS and PPCC announced in March after school campuses closed from coronavirus constraints that the spring ceremonies would be virtual and not in person.

They decided early on in the virus outbreak to move the ceremonies online because school officials knew it would take a lot of work.

PPCC administrators polled students about what they wanted, and most said an in-person event or a postponement, said spokesman Warren Epstein.

“But neither of those options are workable,” he said.

Waiver for Colorado Springs graduations may take a while

While all spring graduates have been invited to walk in next year’s ceremony, PPCC also produced a virtual ceremony that starts at 10 a.m. Saturday and includes students sharing what they’ve been going through over the past few months.

“Their videos are moving,” Epstein said. “We hope that our graduates feel honored because they’ve been our superheroes. The class of 2020 will be remembered for a long time.”

Seniors received caps, tassels and diploma covers in the mail for home celebrations.

Following the main video, at 2 p.m., videos for each of the six colleges will begin, with deans’ messages and graduates’ photos they submitted shown as their names are read.

Video links for the ceremonies will be posted at commencement.uccs.edu.

“It’s a pretty nice production,” Verner said. “An in-person ceremony is such a special and unique environment, and we wanted to replicate that as best we could.”

Special-needs students are college-bound: UCCS graduates first class in May

PPCC’s ceremony will be broadcast beginning at 10 a.m. Saturday on PPCC TV — Comcast channel 21, channel 78 on Falcon Broadband and 8002 on Century Link PrismTV, as well as on the PPCC Facebook page, ppcc.edu and ppcc.edu/commencement.

“We also wanted to make sure that we have a reading of the names, because that’s the thing that folks will most want to share with their friends and family,” Epstein said. “It makes all the work feel like it led to something official, and it has.”

The program, honor cords, military and veteran medals, coins and letters and pins were mailed to students. Diploma covers will be handed out at a fall event at campuses.

Also among the firsts for the UCCS graduation are three seniors who are the first cohort to complete the comprehensive higher education certificate, a 54-hour program for students with intellectual and developmental disabilities.

Deep and painful cuts are likely to roil El Paso County schools in the aftermath of the coronavirus outbreak, including possible layoffs, furloughs, salary reductions and the elimination of grants and programs.