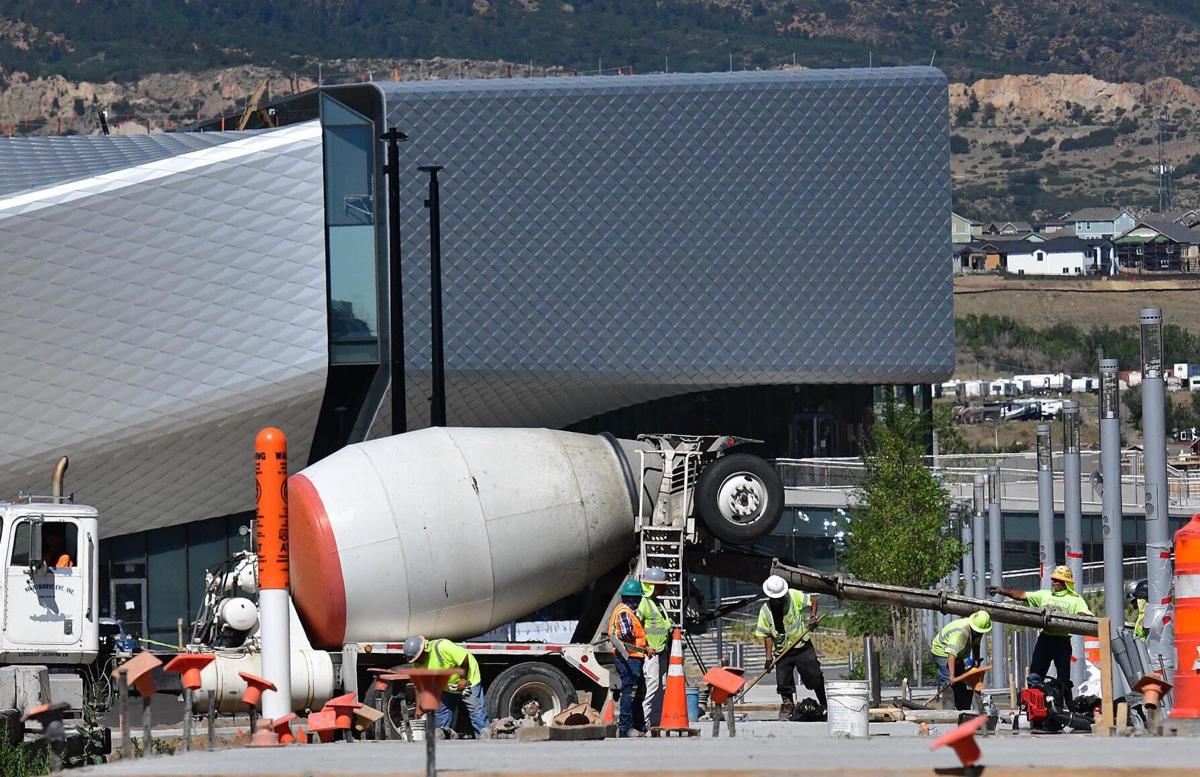 Construction crews work on concrete that is being poured on the walkway to the new U.S. Olympic & Paralympic Museum in downtown Colorado Springs on Monday, July 20, 2020. The museum will officially open its doors July 30. Tickets will go on sale at 9 a.m. Wednesday, with prices ranging from $14.95 to $24.95.

Construction crews work on concrete that is being poured on the walkway to the new U.S. Olympic & Paralympic Museum in downtown Colorado Springs on Monday, July 20, 2020. The museum will officially open its doors July 30. Tickets will go on sale at 9 a.m. Wednesday, with prices ranging from $14.95 to $24.95.

An eagerly awaited museum that will pay homage to the nation’s Olympic and Paralympic movements while it helps transform southwest downtown in Colorado Springs is set to open at month's end.

The U.S. Olympic & Paralympic Museum will open to the public July 30, just over three years since its groundbreaking. The museum’s opening comes after a delay of about two months caused by the COVID-19 pandemic.

The 60,000-square-foot venue, at Sierra Madre Street and Vermijo Avenue, will tell the stories of Olympic and Paralympic athletes, while featuring a dozen galleries that will spotlight the Winter and Summer Games, an Olympic Hall of Fame, athlete training, medals and the Olympic Games' Parade of Nations, among other areas.

Interactive displays and radio-frequency identification technology, meanwhile, will allow museum visitors to use a keepsake credential to customize their sport preferences and accessibility needs. Team USA athletes were involved and consulted for the project to ensure an authentic experience and inclusive design, museum officials say.

"The stories of our Olympians and Paralympians are the stories of this nation’s history," Museum CEO Christopher Liedel said in a news release Monday that announced the July 30 opening. "Every American can see themselves in the members of Team USA and will be inspired by their dedication, perseverance and respect for the Olympic and Paralympic values. The museum has the unique privilege of telling these stories, and we are ready and excited to share them with the world."

The museum is expected to draw about 350,000 tourists a year and help attract apartments, a hotel, offices and other new uses to southwest downtown.

"Not only will the museum anchor the city’s southwest downtown redevelopment, it will also add significantly to our nearly half-billion dollar sports industry here in Colorado Springs for decades to come, and it will be a wonderful tribute to our long history and connection with the U.S. Olympic and Paralympic movements," Suthers said.

The opening of the museum — named in January as one of 2020's most anticipated buildings worldwide by Architectural Digest — culminates an eight-year effort by a nonprofit group and community leaders to build the venue in a city that’s home to an Olympic Training Center and where the U.S. Olympic Committee has been headquartered since 1978.

The Springs adopted “Olympic City USA” as a city moniker in 2016.

The $91 million project first was discussed in 2012 by backers who sought to create the nation’s first Olympic museum. A year later, the museum was included as part of City for Champions — a series of projects proposed by city and community leaders to pump up the city and state’s tourism industry.

In December 2013, the Colorado Economic Development Commission committed up to $120.5 million in state sales tax revenue over 30 years to help fund City for Champions, whose other projects are a multiuse outdoor stadium in downtown and an indoor arena at Colorado College; a new Air Force Academy visitor’s center; and a sports medicine and performance center at the University of Colorado at Colorado Springs.

A ribbon-cutting for the museum is planned for the morning of July 30. The ceremony, however, will be scaled back because of the ongoing COVID-19 pandemic, said Peter Maiurro, the venue’s chief communications and business affairs officer.

Several COVID-19 related safety measures have been put in place at the museum, whose amenities include a retail store, cafe and outdoor plaza.

Among them: All staff and visitors will have their temperatures checked and must wear face coverings; galleries will have attendance limits based on local, state and federal health guidelines; and visitors will receive a keepsake stylus for use with touchscreens and other touchable elements to limit contact on surfaces.

The U.S. Olympic and Paralympic Museum, heralded by The New York Times and Architectural Digest, was supposed to open its doors to Colorado Sp…