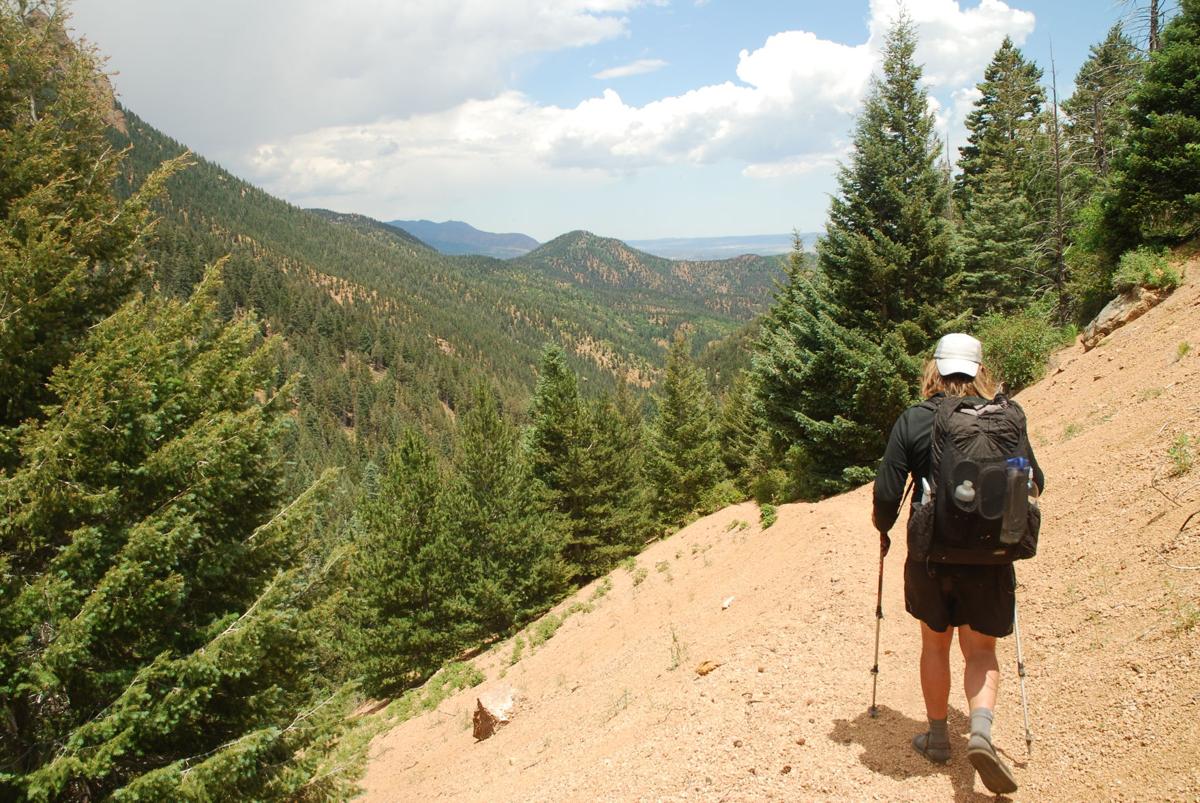 Christopher Schwing of Manitou Springs hikes down Trail 666 toward High Drive, along a route used for the first road to the Pikes Peak summit. Under a U.S. Forest Service plan designed to protect a unique species of trout living in Bear Creek, portions of the 1873 Bear Creek Trail are expected to be eliminated. 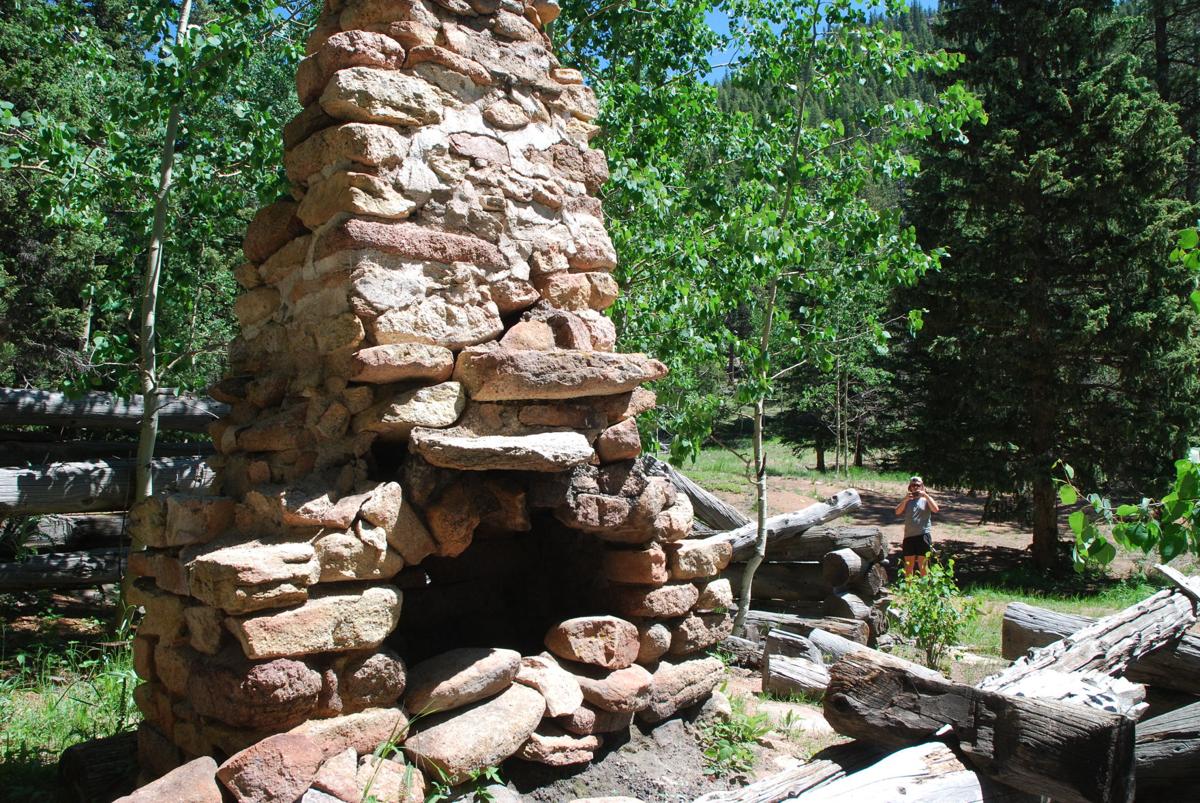 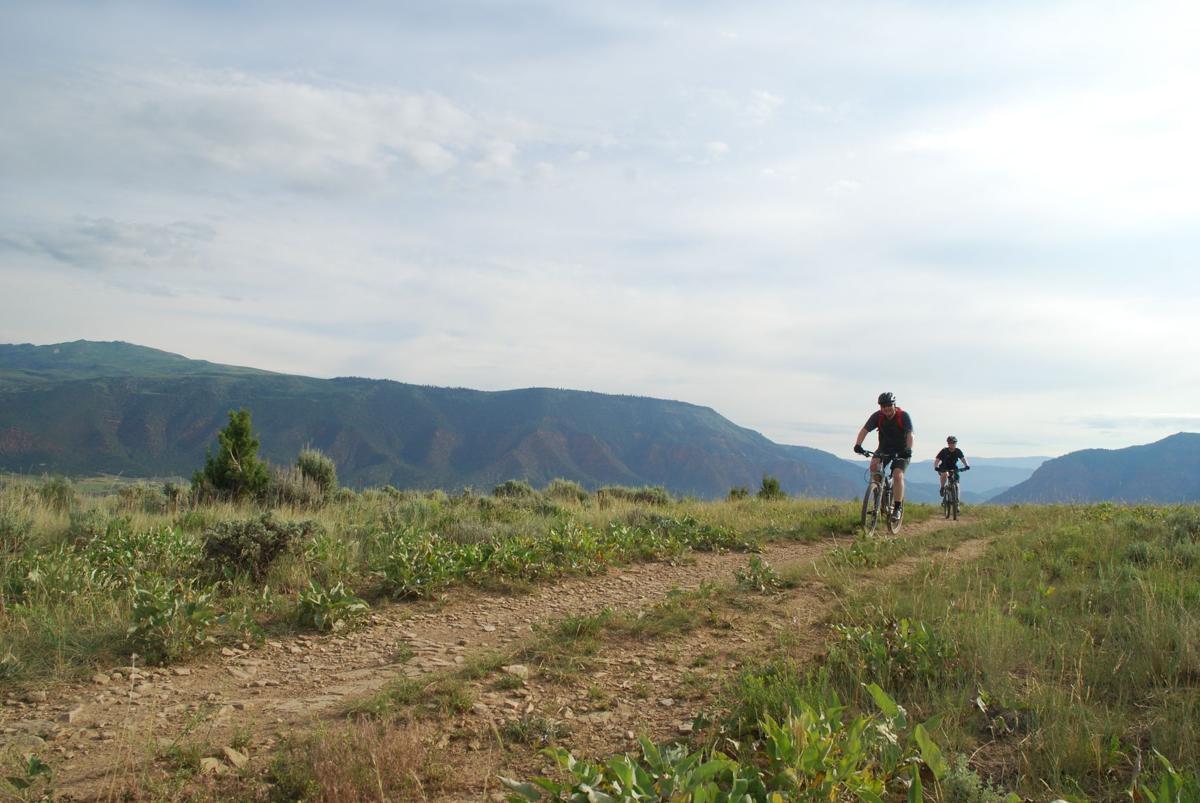 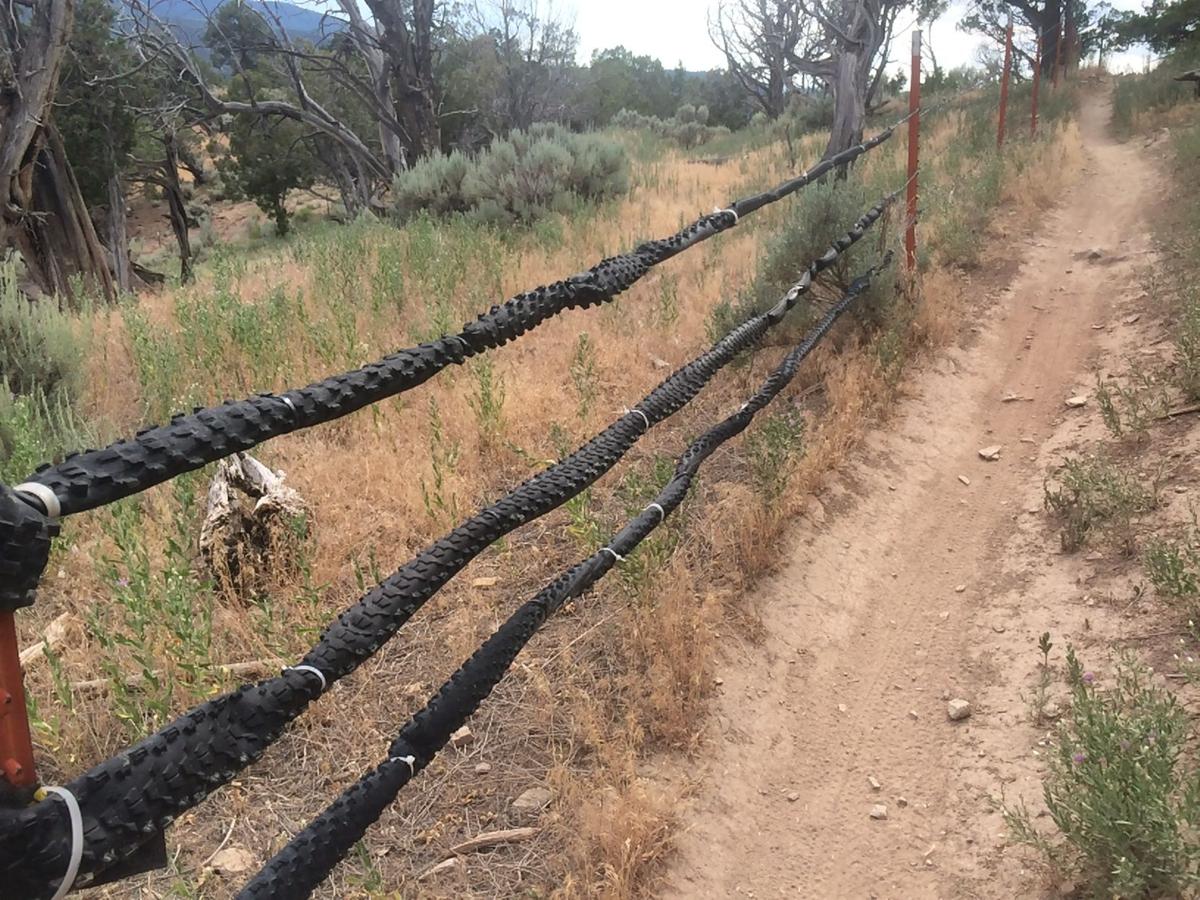 Christopher Schwing of Manitou Springs hikes down Trail 666 toward High Drive, along a route used for the first road to the Pikes Peak summit. Under a U.S. Forest Service plan designed to protect a unique species of trout living in Bear Creek, portions of the 1873 Bear Creek Trail are expected to be eliminated.

There were slips and scratches, leaps of faith over "disagreeable fissures" and occasional collisions between man and mule.

Traveling the 1873 Bear Creek Trail - thought to be the first improved road to Pikes Peak's 14,115-foot summit - was by no means a pleasure cruise, but a reprieve awaited on the banks of Mystic Lake, a glacier-formed pool known today as Moraine Lake.

There, perched like a mirage at 10,000 feet, 4 miles shy of the summit, was a nine-room hotel boasting "good spring beds," telegraph service to Colorado Springs and meals served at any hour - a civilized refuge in a wild place.

"The house is kept at present by Mr. Dana and his wife, who could teach some of the boarding house keepers nearer the sea level many valuable lessons," one unnamed chronicler wrote in 1874, as part of a vivid recounting of his sightseeing party's thrilling pack trip up Bear Creek canyon within months of the road's opening.

His account is preserved in "Shattered Dreams on Pikes Peak," an oft-cited history by Ivan W. Brunk that draws on assessors records, correspondence, newspaper reports and photographs to capture the short-lived tourism trade that sprung up around the Bear Creek road, which was built to facilitate the construction of an Army Signal Corps weather station on top of the summit.

While records are murky, the lake house at Moraine is believed to have declined within a decade, after a new, shorter route to the summit was completed up Engelmann Canyon, along the present route of the Pikes Peak Cog Railway.

By the time Brunk's work was published in 1989, bricks and nails were all that was left at the hotel's foundation, and similar boarding houses in Jones Park and at Seven Lakes - today called the South Slope Recreation Area - likewise had faded from view.

But today, more than a century after the first road was completed, it's still possible to retrace most of the "perilous" stage route that brought early tourists to the summit - though that, too, is about to change.

Under a U.S. Forest Service plan meant to safeguard a unique species of trout living in Bear Creek, portions of the 1873 Bear Creek Trail are expected to be obliterated with the goal of reducing the amount of eroded Pikes Peak granite that finds its way into Bear Creek, where it diminishes trout spawning habitat.

The move likewise will cut off access to remnants of homesteading in 1,200-acre Jones Park, and a trail to several lesser-traveled mountains overlooking Bear Creek also will be lost.

No date has been announced, but the agency has said that changes to the area could come by fall or early 2016 - meaning that now is the time to dive into history.

Please note that camping is prohibited in the Bear Creek corridor - along with fishing and fires - so allow for a full day of travel and prepare for all weather.

On this trip, there will be no spring beds to greet you.

Some trails on Pikes Peak predate the arrival of Westerners, to when Ute Indians and other tribes used them for trade and access to hunting grounds.

The rugged road up Bear Creek followed one such "unconstructed but clearly defined route" likely traveled by the Utes, according to Brunk.

Until then, hikers can relive the experiences of the mountain's earliest tourists by stringing together 666 and 667 for roughly 6 miles to a point just shy of Moraine Lake, where a Colorado Springs Utilities gate blocks further access. Despite the anticlimax of a "No Trespassing" sign, the route offers a sweeping tour of majestic overlooks, tumbling creeks and wide, grassy meadows dotted with aspen stands. Opportunities for side trips are legion, with plenty of rewards for the intrepid.

Bear Creek Trail ascends for about 1.8 miles, past Josephine Falls, to a point where it meets Jones Park/Cap'n Jacks Trail (667).

Hike 667 west through the grassy meadows of Jones Park and beyond. The Moraine Lake gate is roughly 3 miles past Jones Park. Hikers can cut the 12-mile round trip short by turning around at any point - or extend the trip by exploring Jones Park and its ruined cabins.

With lush green meadows that fill with wildflowers in spring, Jones Park is a sunny refuge protected on all sides by rocky, forested peaks - ripe with picnic spots.

The area is named for Joseph C. Jones, a former prospector who established his homestead after the completion of the Pikes Peak Trail with designs on building a hotel for tourists.

While it's unclear if he entertained guests, a 2013 study commissioned by the Forest Service speculated that Jones, who established a series of fish ponds on his property, might have been responsible for introducing the greenback cutthroat trout now living in Bear Creek, procured from a fishery that obtained stock from the South Platte drainage.

Bear Creek's previous trout population was killed off by fire in the 1850s.

Jones' plans for a tourist stop had all but fizzled by the close of the 1870s and, in 1882, the Rev. R.T. Cross recounted a strange visit by a "tall, fierce man" who strode up to him on a trail as he searched for crystals.

"I am the greatest man in all this region," Jones told Cross during a "harangue" in which he offered to point his visitor to vast stores of gold in the mountains - for a price.

Urged to visit Jones' cabin, Cross found it in "perfect order" - "as neat and clean as any woman could keep it."

"The sitting room contained beautiful furniture made by himself, and rugs made from the skins of wild beasts," Cross wrote. "I looked nervously at several guns hanging from the walls, but the crazy man did not offer to take them down."

Wary of his host, Cross left the cabin, and Jones "strode back to the work of digging big stones out of his fish pond," the minister wrote.

Jones died in Colorado Springs a few months after the encounter, leaving behind 160 acres, four horses and some household goods.

To get there: The Bear Creek/Jones Park route isn't the only way to Jones Park.

For a shorter route, park at the end of Cheyenne Canyon Boulevard, where it meets Gold Camp Road and High Drive, and hike the closed portion of Gold Camp Road to Seven Bridges Trail (622), which leads west along Mt. Kineo before cutting north into Jones Park.

This hike is roughly 6 miles round trip.

In 1885, Frank Herbert Loud, a 33-year-old Colorado College professor of "mathematics and kindred subjects," used his time off from teaching to establish a summer home for his wife and child along a bubbling creek in the shadow of Mount Garfield.

There he found "healthful exercise with the seclusion favorable for study" - and harsh conditions that roiled plans to plant wild plum trees and other crops.

Two of Loud's cabins still can be found, including that of his main residence, Chipmunk Lodge, where an 8-foot stone chimney stands in the middle of toppled log walls.

Under proposed reroutes, hikers will have access to Chipmunk Lodge, but at least two other sites farther up the canyon will be off-limits.

To get there: The trail to Loud's cabins can be found on Jones Park Trail (667) just west of where it merges with Pipeline Trail (668). The trail heads north along a small creek. A downed tree and a "no motorized access" sign mark the start. The main cabin is located within a quarter-mile or so. Hike farther up the canyon, along the creek, to find an abandoned foundation and another toppled cabin.

The trail to Loud's cabins continues up a steep draw toward Mount Garfield, climbing past a waterfall and along a scree-filled slope.

Where the trail peters out, cairns mark the way on what is a demanding, experts-only scramble to Garfield's 10,930-foot summit. Visitors can look forward to stellar views on all sides.

From Loud's Chipmunk Lodge, the hike spans about 2.8 miles with 1,600 feet of elevation gain. The neighboring peaks of Mount Arthur and Tenney Crags also can be attained by this approach.

Under the Forest Service plan, much of the old trail will be obliterated, forcing hikers to bushwhack routes to these peaks from Willow Creek to the north.

To get there: Follow the trail leading to Loud's cabins, as described earlier.

Test yourself on Jones Downhill

The Forest Service plan calls for a reroute that will preserve cycling in the area, though it will eliminate the portion of 667 that follows Bear Creek, effectively nixing the best parts of a classic ride. (Dirt bikers and mountain bikers will have access to Pipeline Trail (668) and most of Forester Trail (701), along with a proposed reroute of 667 that will tie into the Mt. Buckhorn ridge and Penrose Multiuse Trail (665), also called lower Cap'n Jacks.)

Jones Downhill is an advanced ride, so come prepared. Cyclists and dirt bikers, yield to hikers. Slower riders should pull over and yield to those who catch up to them on the descent.

To get there: This is generally done as a shuttle. Drive roughly 12 miles up Old Stage Road to the Penrose/Rosemont Reservoir, where the ride begins on Forest Road 379. Climb 379 for just less than 2 miles to reach the trailhead at Frosty's Park.

To maximize your time in Jones Park, take Forester Trail/Jones Downhill (701) to Jones Park/Cap'n Jacks (667). Head east on 667, taking care to follow it up the hill at a marked creek crossing. Riders generally continue along the ridge toward Penrose Trail (665), which empties onto Gold Camp Road. Finish the ride by pedaling down Gold Camp to the unmarked entrance to the Chutes, a classic descent into Stratton Open Space.

To go bigger yet, consider skipping the shuttle and riding the entire loop. Park at the Chamberlain trailhead in North Cheyenne Canon Park and climb Chamberlain to Gold Camp. Take Gold Camp more than 8 miles to the junction with Old Stage Road, and continue west to Forest Road 379.

This involves 22 miles of climbing to get to the Jones Downhill trailhead, for a total loop of 38 miles, with 6,000 feet of elevation gain - assuming you make it back to your car via the Chutes and Chamberlain. Bring two sandwiches and a water filter.