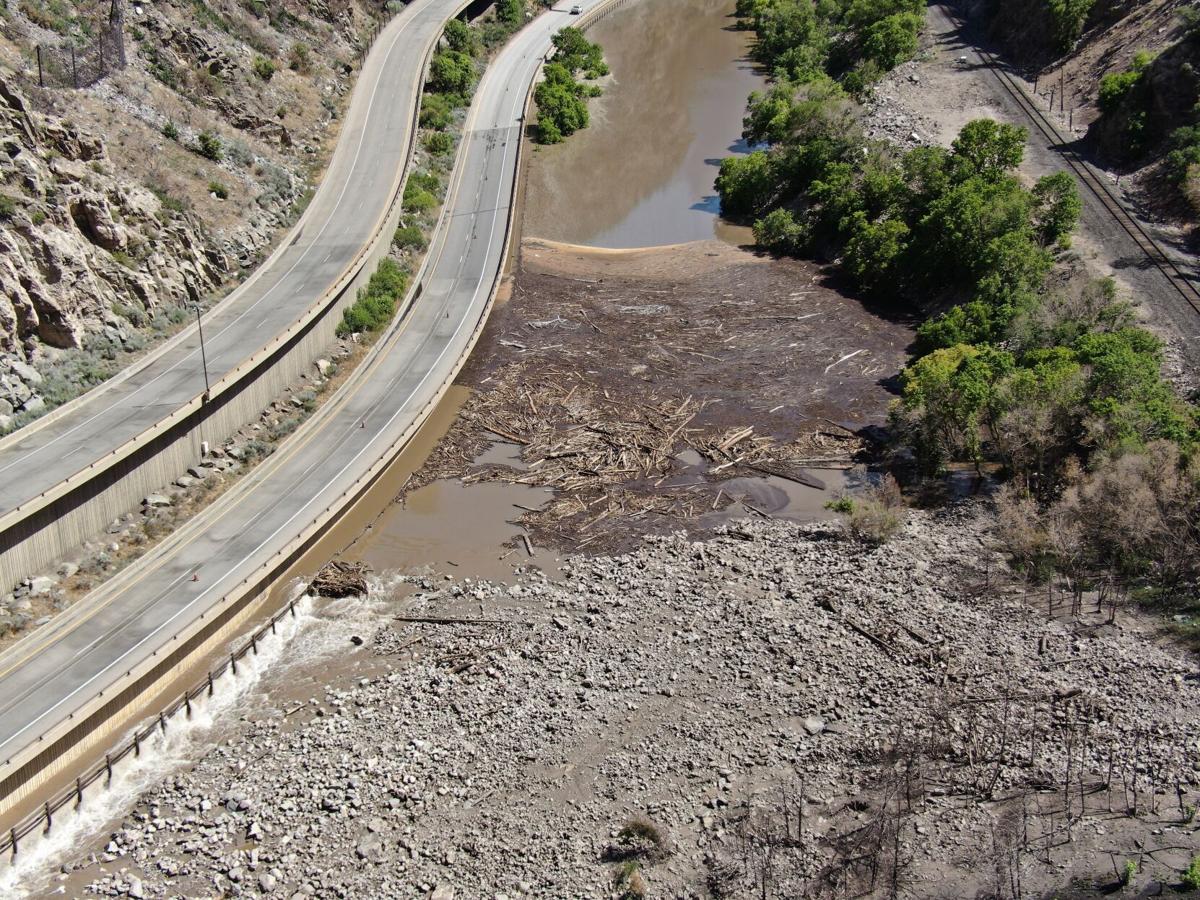 Friday. The field is pushing water and debris up against a wall supporting the highway, threatening its integrity. Colorado Department of Transportation crews are working to install a safety barrier to divert water from the Colorado River away from the highway. 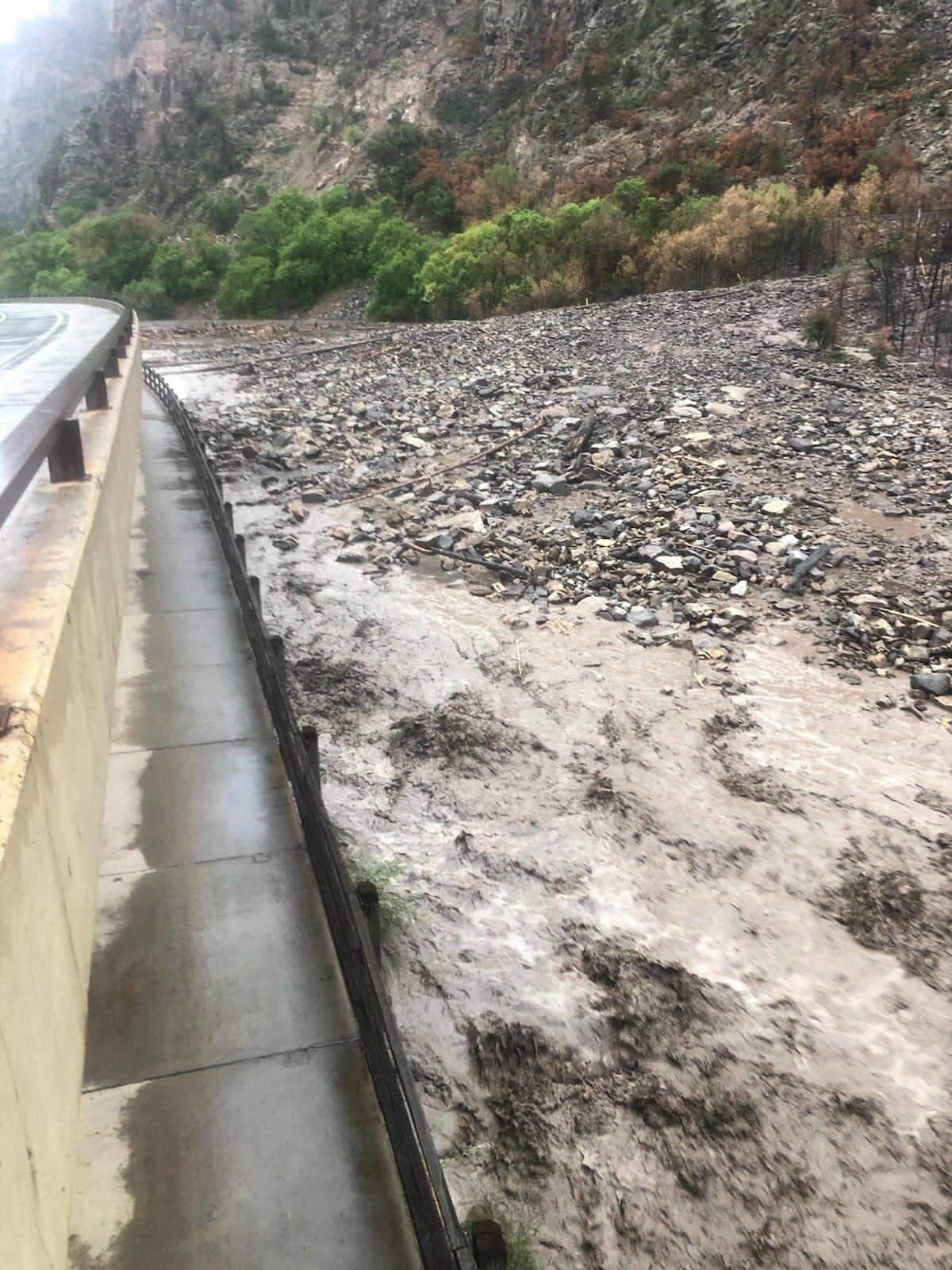 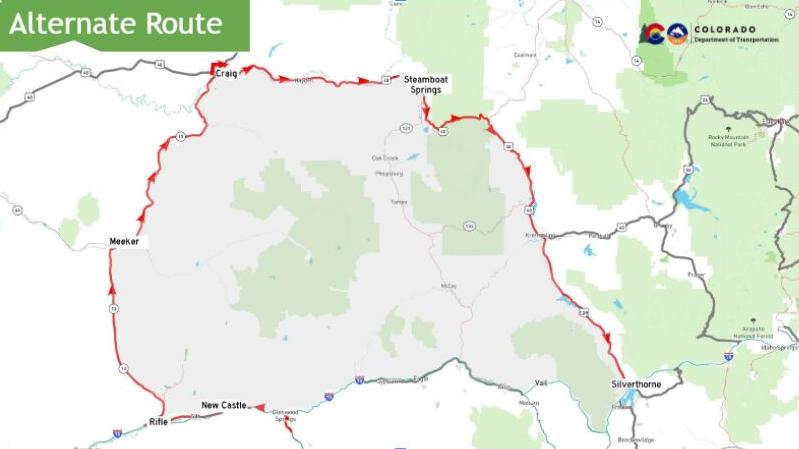 A map of the detour the Colorado Department of Transportation recommends for drivers on Interstate 70, as of July 23, 2021.

Friday. The field is pushing water and debris up against a wall supporting the highway, threatening its integrity. Colorado Department of Transportation crews are working to install a safety barrier to divert water from the Colorado River away from the highway.

A map of the detour the Colorado Department of Transportation recommends for drivers on Interstate 70, as of July 23, 2021.

The westbound lanes of I-70 have been reopened, according to a tweet from the Colorado Department of Transportation. Eastbound lanes remain closed.

The Colorado Department of Transportation closed Interstate 70 in Glenwood Canyon Thursday evening as debris flows covered parts of the roadway and threatened the integrity of the highway, the department said.

“Currently we have both directions closed,” Regional Transportation Director Mike Goolsby said. “During the last 24 hours we got an exorbitant amount of rain.”

Flooding near the Grizzly Creek burn scar littered the road with debris at around 5:30 p.m., forcing exit closures between Glenwood Springs, Dotsero and West Rifle, the department said.

As of right now, the department doesn’t have an estimate on when the extended closure will end, but said that because a debris field blocking the Colorado River pushed water up against a wall supporting the highway near the Hanging Lake Tunnel, eastbound lanes may take longer to reopen.

Because the water from the Colorado River could undermine the wall supporting I-70, Goolsby said, crews have focused work on the debris field roughly a mile west of the Hanging Lake Tunnel. Some of those efforts include starting work to install a safety barrier to divert water from the river.

Despite “sizable” drainage over and around the The Hanging Lake Tunnel complex, the complex was not damaged, though Goolsby said that debris had impacted an area above it. Drainage from Glenwood Canyon also plugged a box culvert drain near Spruce Creek, or mile marker 129, which has stalled work as crews clear it and kept floodwaters from draining properly.

The department encouraged drivers to use alternative routes such as Colorado 13, between Rifle and Craig, to Colorado 40 between Steamboat and Kremmling through Colorado 9 to Silverthorne for eastbound traffic. Westbound traffic can use Colorado 82 through Independence Pass. Vehicles longer than 35 feet cannot use the pass, the department said.

The debris flows, the latest in a series of highway-closing incidents in Glenwood Canyon throughout the summer, were also a sign of Colorado’s monsoon season, which has caused flash flooding and mudslides throughout the state since early this week.

In Larimer County, where flash flooding that swept through Poudre Canyon and over Colorado 14 on Tuesday destroyed six homes and killed at least one person. Deputies haven’t yet found the three adults who went missing in the flood. The Larimer County Sheriff’s Office said they would continue the search Saturday, but with “reduced resources.”

The Cache la Poudre River, the sheriff’s office said, is still closed from the fish hatchery to Rustic.

The series of closures on I-70, Goolsby said, come at an ironic time, and have prompted discussions about the resiliency of the transportation department’s system in that area.

“The one thing that we’ve need on the Western Slope is water and rain, and we haven’t had a monsoon season in a couple of years, and we’re getting one this year,” Goolsby said. “It’s definitely a federal-level discussion and it’s also a state-level discussion about resiliency in our networks.”

The race to get residents electricity after Poudre Canyon mudslide

Nearly 100 members who receive power from Poudre Valley REA, the electric utility that supplies power for people who live down the Poudre Vall…

Make Connections at The Farm: With Your Neighbors and Nature
Tweets by CSTMC