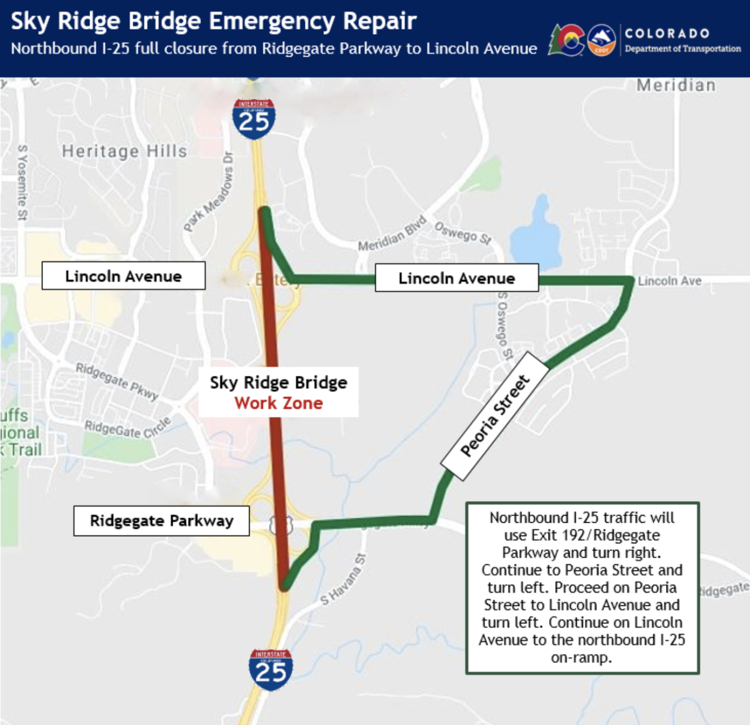 Suggested detour from I-25 in Lone Tree.

Suggested detour from I-25 in Lone Tree.

Emergency bridge repair on Interstate 25 will tangle traffic this weekend near Lone Tree when workers close the northbound lanes starting Saturday at 7 p.m., the Colorado Department of Transportation said.

The northbound lanes won't reopen until Sunday afternoon and southbound also won't get a break, with two lanes in that direction also closed for the work, the agency said.

Significant delays of up to two hours are expected. Officials urge drivers to avoid the area over the weekend.

It's the longest of several planned closures on the route.

During these closures, delays of 20 to 30 minutes are expected, officials said.

During the closures, northbound traffic will be detoured.

This construction project will replace the damaged section of the Sky Ridge Avenue Bridge above I-25 in Lone Tree. The bridge was damaged after being struck by a truck in February, officials said.

The Colorado Department of Transportation will replace the damaged portion of the bridge, taking down part of the structure and completely replacing it with a new girder and bridge deck.

All work is scheduled to be finished before the Fourth of July weekend.

Click or tap here for road and traffic updates from CDOT.