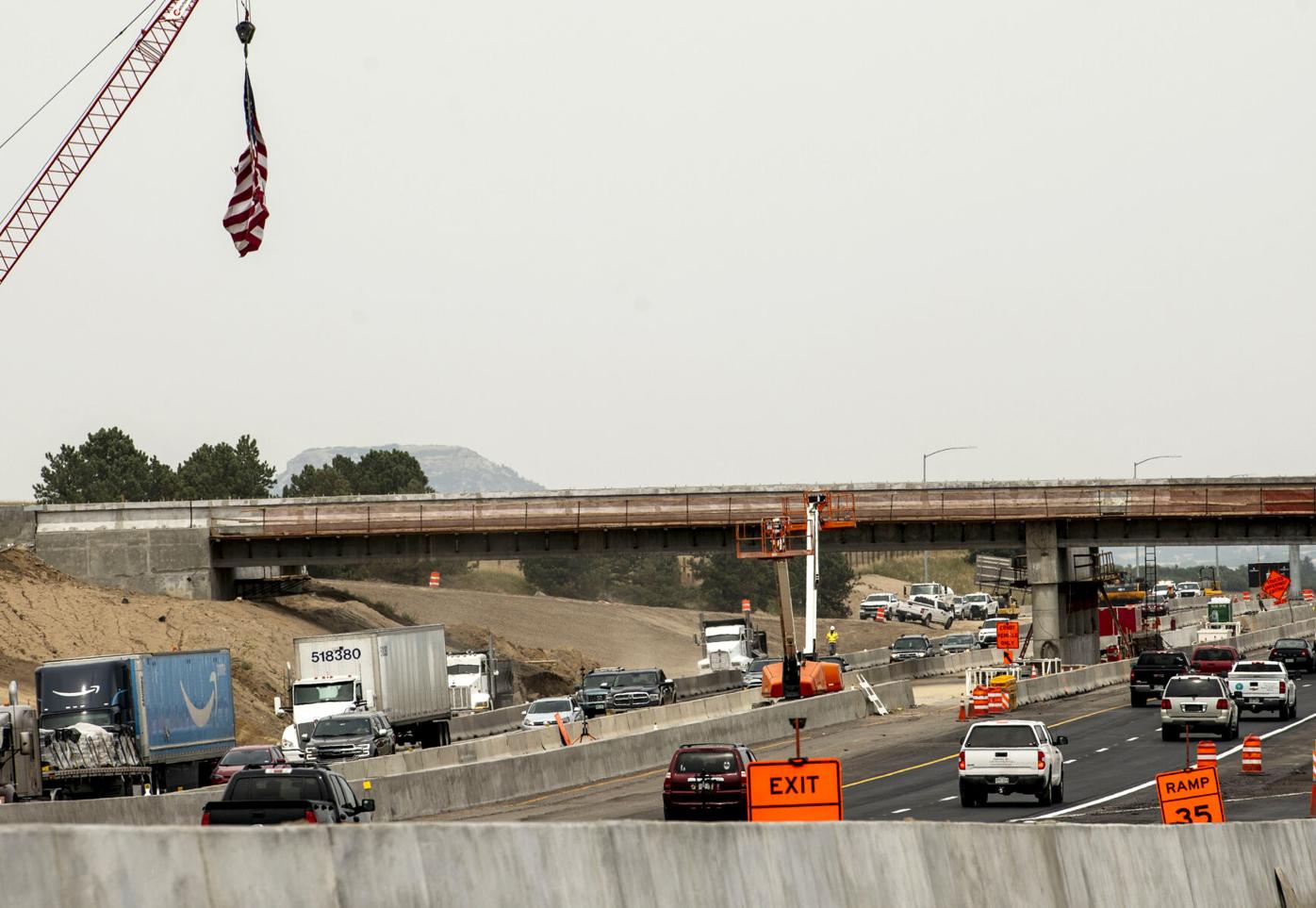 Crews work on a new bridge on Interstate 25 at County Line Road near Monument in September 2021 as part of ongoing construction in the Interstate 25 South “gap” project, widening lanes along the highway from Monument to Castle Rock. The new bridge is 95% complete, state transportation officials said. 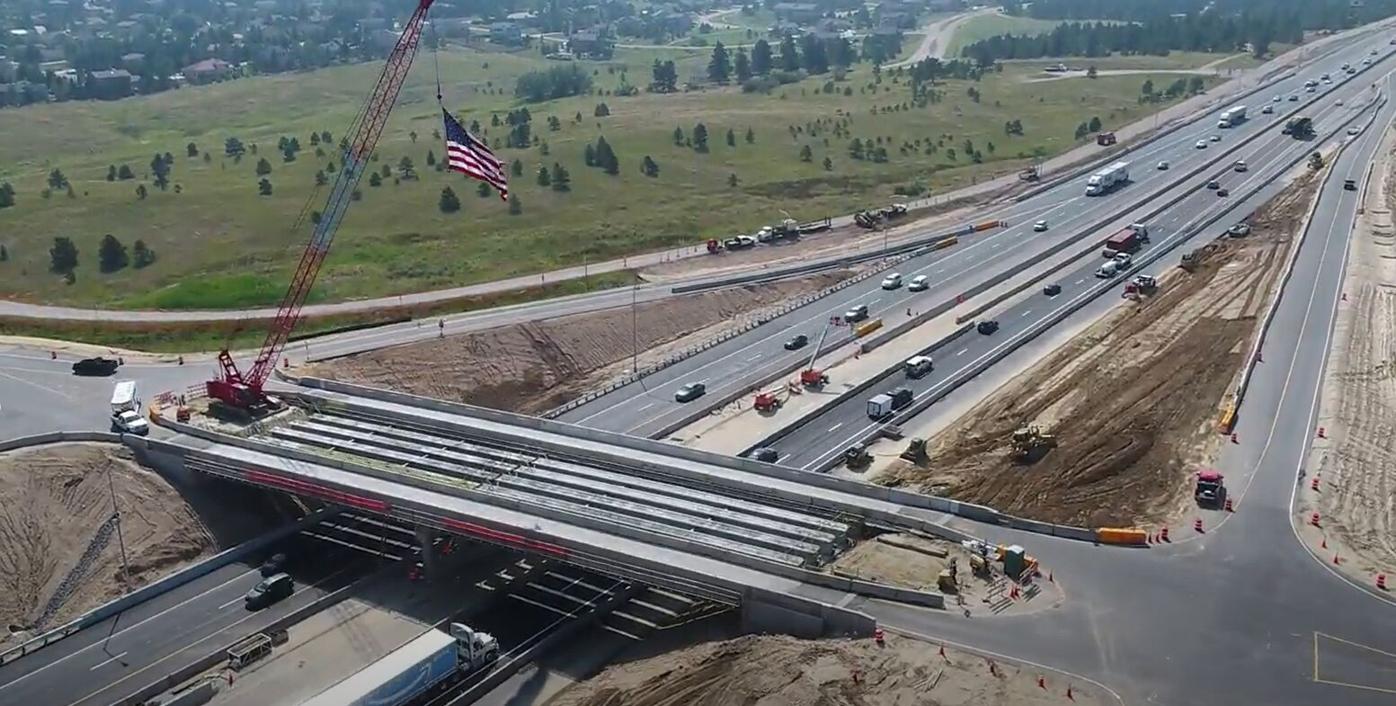 Construction crews with Kraemer North America work on building a new bridge at County Line Road over the highway near Monument in October 2021. 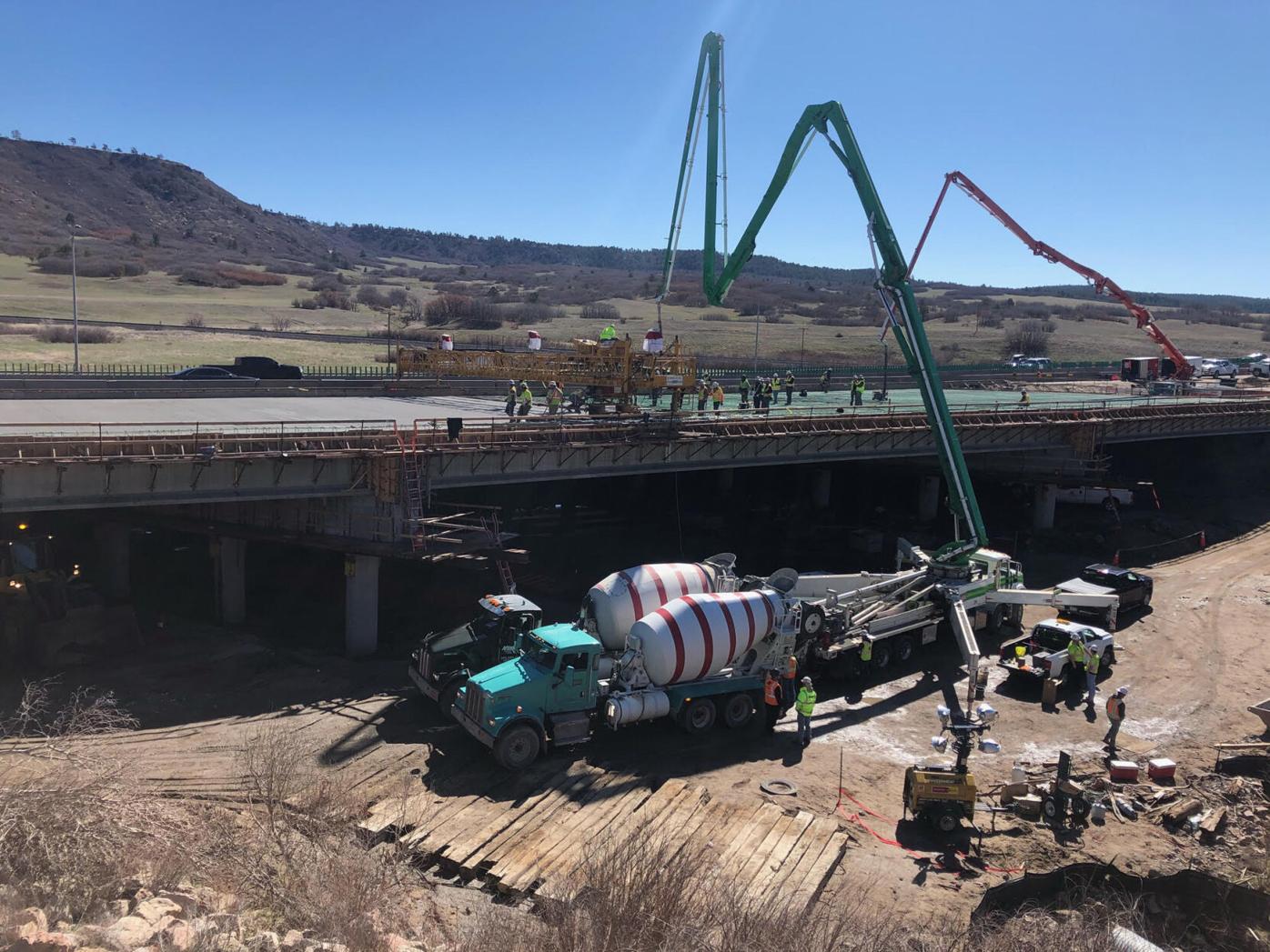 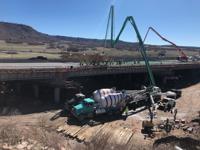 Crews lay asphalt as part of work to complete the Plum Creek bridge over Interstate 25. The bridge is one of four completed in the I-25 South “gap” project, widening lanes along the 18-mile stretch of roadway between Monument and Castle Rock. The project includes five total bridges.

Work on the $419 million widening of lanes in the Interstate 25 South Gap project is nearing completion as the project enters its fourth and final year — on time and on budget, state transportation officials said.

When it is complete, the roughly 18 miles of roadway between Monument and Castle Rock will include new express lanes in each direction, five new bridges, four wildlife crossings and several miles of deer fencing, a new truck-climbing lane on southbound I-25 at Monument Hill, wider shoulders and improved technology to help modernize communications and power along the corridor.

Construction is expected to finish on schedule in November 2022, Colorado Department of Transportation officials said in a recent news release.

Crews will finish building a new bridge at County Line Road over the highway near Monument that is 95% complete, Colorado Department of Transportation spokeswoman Tamara Rollison said. The new bridge will be double its original size to accommodate one through-lane and one left turn lane in each direction, with widened shoulders on each side to allow for better capacity, transportation officials have said.

Crews are also placing new pavement on all lanes up and down the corridor and have already laid down 620,000 tons of a total planned 822,000 tons of asphalt, the release said.

By early January, crews had also relocated about 90,000 linear feet of existing fiber-optic line that was beneath the highway to enable future advanced technology. For example, a queue warning system will use sensors to detect speeds along the corridor, then update digital signage to alert drivers of estimated times to reach locations like Larkspur or Monument. Pan-tilt zoom cameras installed along the 18-mile stretch will allow the project team to see traffic in real time and a truck warning system will use sensors to tell drivers to slow down and yield to construction trucks entering and exiting the highway, according to the project website.

The expansive project also includes four new wildlife passes state transportation officials said will reduce the number of collisions between vehicles and animals by 90% along this stretch of highway.

“Over 87,000 motorists use I-25 between Monument and Castle Rock daily. Flanking both sides of this stretch of interstate are vast areas of open space and the largest contiguous wildlife habitat along the Front Range, which sees an above average amount of wildlife-vehicle collisions,” officials said in a news release.

Crews have also installed 23.5 miles of 28 total miles of deer fencing as part of the project. The Colorado Department of Transportation and Colorado Parks and Wildlife are now researching how effective the crossings are as officials design another wildlife overpass planned on I-25 between Greenland and Palmer Divide roads north of Monument, the release said.

Crews broke ground on the I-25 South Gap project just before Labor Day 2018. When it is finished, the roadway will open new toll lanes in each direction, first during a testing phase when tolls will not be collected, Rollison has previously said. Tolls will go into effect when the testing phase is complete.

The toll lane rates could be the lowest in the state and among the cheapest in the country, according to a nearly 500-page traffic and revenue study commissioned by the agency’s High Performance Transportation Enterprise. But the lanes have been a sore point with some residents and local officials, who objected to what they claimed amounted to double taxation since local taxes helped fund the project.

A state board will set the toll rates before the new lanes open, but officials won’t know the final rate until a few months before the tolls begin to be collected, Rollison said Wednesday. Officials “will do extensive public outreach” to obtain feedback on the rates, she said.

In 2017, the study recommended a rate of about 15 cents per mile, or approximately $2.25 per one-way trip. Toll revenues are expected to cover the cost of operating and maintaining the lanes, the project website states. The hope is to maximize the number of drivers using the toll lanes and reduce congestion in all lanes.

Originally estimated to cost $350 million, the Gap project budget increased to $419 million in the last year when new projects — reconstruction of the aging County Line Road bridge, a new truck-climbing lane on southbound I-25 between the Greenland Road interchange and the Monument weigh station, a permanent truck chain-up station on southbound I-25 in Larkspur at a former rest area and mitigation of unsuitable soil found along the project area — were identified, Rollison previously said.

The project is funded by a mix of state, local and federal money.

For the latest project updates, visit i25gap.codot.gov or the project’s Facebook page (@I25SouthGapProject).