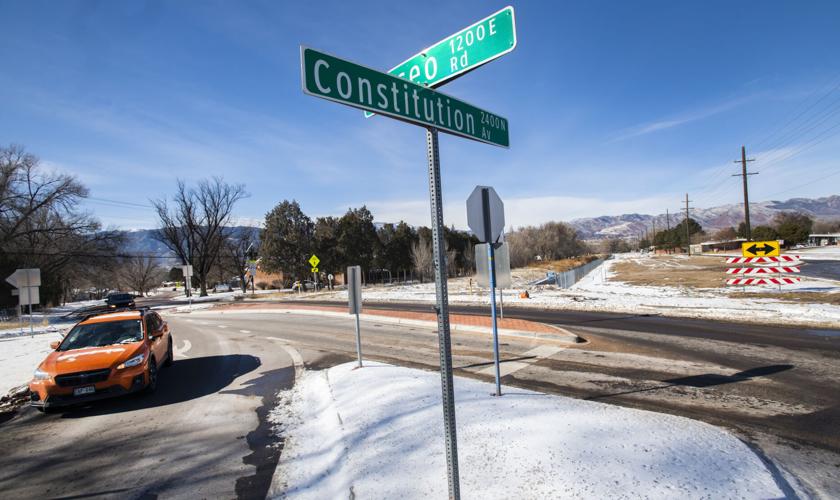 A vehicle drives east through Paseo Road and Constitution Avenue on Thursday where Constitution ends on the west. The city of Colorado Springs is considering extending Constitution along the existing right of way to Interstate 25. The city is holding a town hall 10 a.m. Saturday at Stratton Elementary School to discuss the topic. 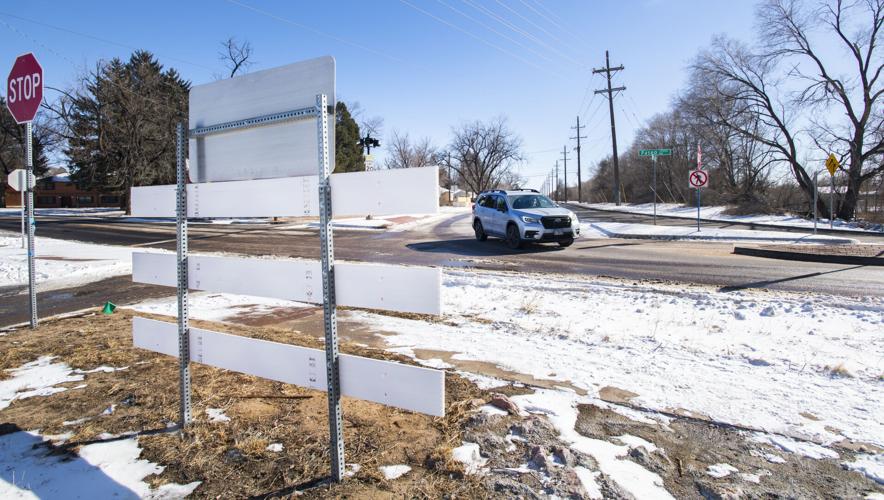 A westbound vehicle turns onto Paseo Road from Constitution Avenue on Thursday where Constitution ends on the west. The city is considering extending Constitution along existing right of way to I-25, arguing it will ease traffic congestion.

A vehicle drives east through Paseo Road and Constitution Avenue on Thursday where Constitution ends on the west. The city of Colorado Springs is considering extending Constitution along the existing right of way to Interstate 25. The city is holding a town hall 10 a.m. Saturday at Stratton Elementary School to discuss the topic.

A westbound vehicle turns onto Paseo Road from Constitution Avenue on Thursday where Constitution ends on the west. The city is considering extending Constitution along existing right of way to I-25, arguing it will ease traffic congestion.

Colorado Springs residents are protesting for at least the third time in recent decades the potential extension of Constitution Avenue to Interstate 25, a project officials say they must consider as east-west mobility across the city remains a challenge.

"Our current east-to-west corridors are stressed, there's limited capacity, a high number of crashes and (residents) don't view those corridors as reliable to get them from point A to point B," Public Works Director Travis Easton said.

As the city put together its draft transportation plan, called ConnectCOS, officials proposed a feasibility study to look at whether extending Constitution Avenue could alleviate some of those worries, he said.

City Councilwoman Nancy Henjum and public works staff will lead a town hall Saturday to discuss the potential study that would address mobility across the city's east and west Fillmore Street and Uintah Street corridors.

The proposed study would consider widening Fillmore Street as well as potentially extending Constitution Avenue from Paseo Road to Interstate 25 using existing right of way, or maintaining the road's current configuration while expecting increased traffic and travel delays in the future, a city news release said.

In the week ahead of the meeting, residents have pushed back, saying the extension could fracture historic established neighborhoods in the area and threaten their close-knit sense of community, where neighbors know one another and children walk or bike to school.

"The extension says to me the city doesn't much care about its core downtown neighborhoods," said Tom Murawski, vice president of the 2400 Wood Avenue Homeowners Association, located near the proposed extension. "It's thinking about the car-centric communities on the east side" that would have access to I-25 "at the expense of" some 1,300 residents he estimates could be impacted by the project, he said.

Residents are also protesting the potential noise, pollution and traffic they say extending Constitution could bring — the same concerns they've raised before.

"Opinions have not changed," said Nancy Logan, who has lived in the Bonnyville neighborhood for 31 years. She represented the Stratton Parent Teacher Association in opposition to the extension when it was proposed in the early 2000s. "Extending Constitution through these wonderful 'normal' neighborhoods would be the kiss of death for property values, aesthetics and comfortable living — 'normal' meaning the homes are not fancy, enormous or identical cookie-cutter developments."

As of Wednesday afternoon, 974 people had signed an online petition to remove the Constitution Avenue extension from the draft transportation plan.

"I understand their concerns about property values and (that) they don't want traffic next to their homes. But all they're doing is pushing it onto other people," he said. "We're here to benefit all of Colorado Springs, and that's why we want to do the study — to see if it's feasible. There are other people impacted by (traffic) right now and they certainly deserve to have a voice along the way."

Residents who felt they'd successfully fought back efforts to extend Constitution Avenue previously said they were surprised to see the project and its feasibility study included on the ConnectCOS project list.

"The neighborhoods have won repeated battles over the decades, and it’s time to put an end to it," Murawski said. "It’s time to put a wooden stake in the heart of this vampire — this whack-a-mole project — that keeps coming back."

The city floated a similar proposal in the early 2000s; last year, officials also wanted to fund a study on Constitution's extension to the highway using a portion of the Pikes Peak Regional Transportation Authority's 1-cent sales tax that finances regional and multimodal road projects.

Because of residents' concerns, the city decided not to pursue the feasibility study as part of the list of projects voters considered Nov. 8 when they approved the extension of the PPRTA sales tax for another decade.

Easton said the city put the study and the possible extension of Constitution Avenue on the list of projects included in the draft transportation plan after hearing from residents that they wanted a solution to the city's east-west mobility challenges.

Residents and city officials said there are other possible options for improving mobility across Colorado Springs that don't include extending Constitution.

Easton said he believes the proposed feasibility study could consider expanding Fillmore or Uintah streets and routing more traffic onto those corridors.

"I think we also need to look at the option of 'do nothing'" on Constitution Avenue, Easton said. "Maybe the impacts are too great, and we say 'This is going to be a congested area into the future and we're going to make a conscious decision about that.'"

Murawski suggested the city ensure more neighborhoods are mixed use to cut down on the number of people driving, invest in more walking and biking options, and expand and improve public transit.

The Old North End Neighbors Board of Directors also this week issued a letter formally opposing the extension of Constitution Avenue. In the letter, the board indicated it would support conducting a comprehensive study to "examine the feasibility of optimizing and improving all existing and potential east-west corridors between Woodmen Road and the (Martin Luther King Jr.) Bypass."

The letter requests several guidelines for the study, including that transportation corridors would be evaluated in terms of how construction would impact existing homes; that designs will minimize noise and air pollution; and that if Constitution were extended it would not have more than four total lanes, would not have on- or off-ramps; and wouldn't connect to other roadways between I-25 and Union Boulevard, among other requests.

The feasibility study could cost $2 million-$3 million and would be paid for out of Colorado Springs' General Fund, Easton estimated.

The city has not identified funding or a timeline for east-to-west transportation improvements, he said.

People can submit their feedback on the Constitution Avenue extension and feasibility study by email at connectcos@coloradosprings.gov, city spokesman Max D'Onofrio said.

Colorado Springs Councilwoman Nancy Henjum and public works staff will lead a town hall this weekend to discuss a potential feasibility study that would address mobility across the city's east and west Fillmore Street and Uintah Street transportation corridors.

The town hall will be held from 10 a.m. to noon at the Stratton Elementary School gym, 2460 Paseo Road.