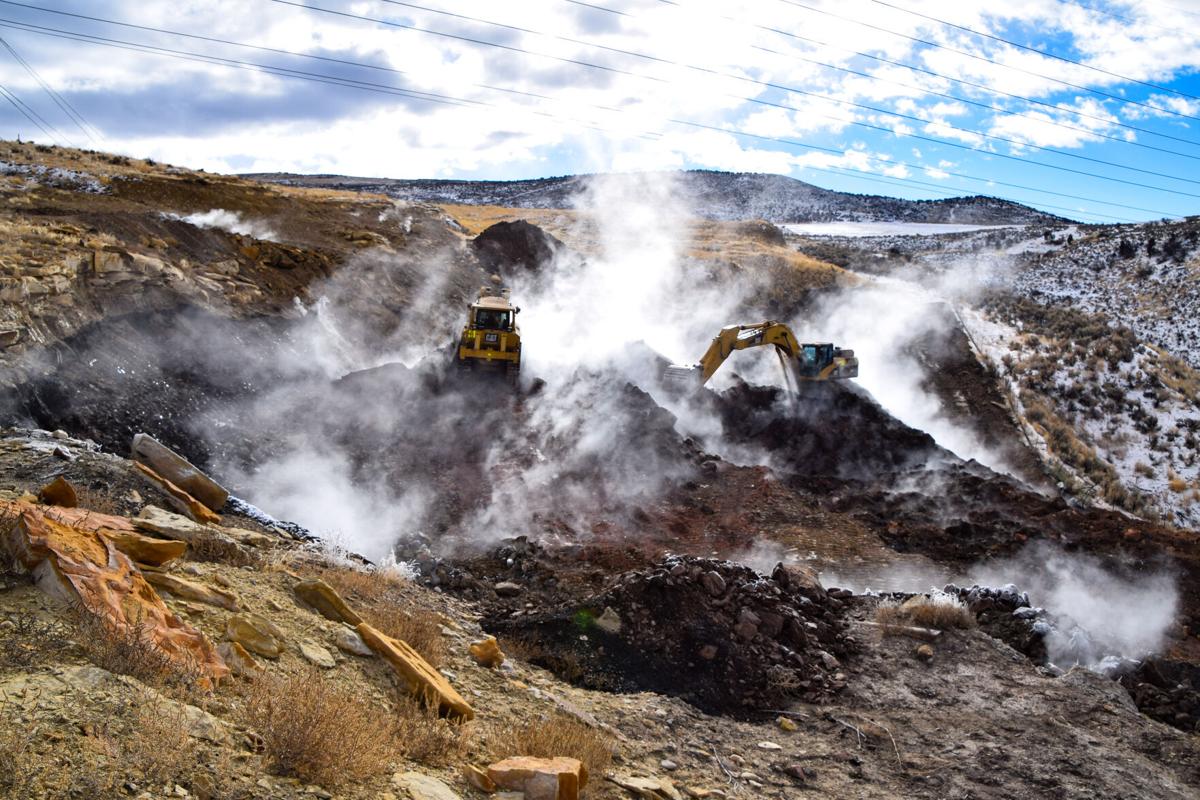 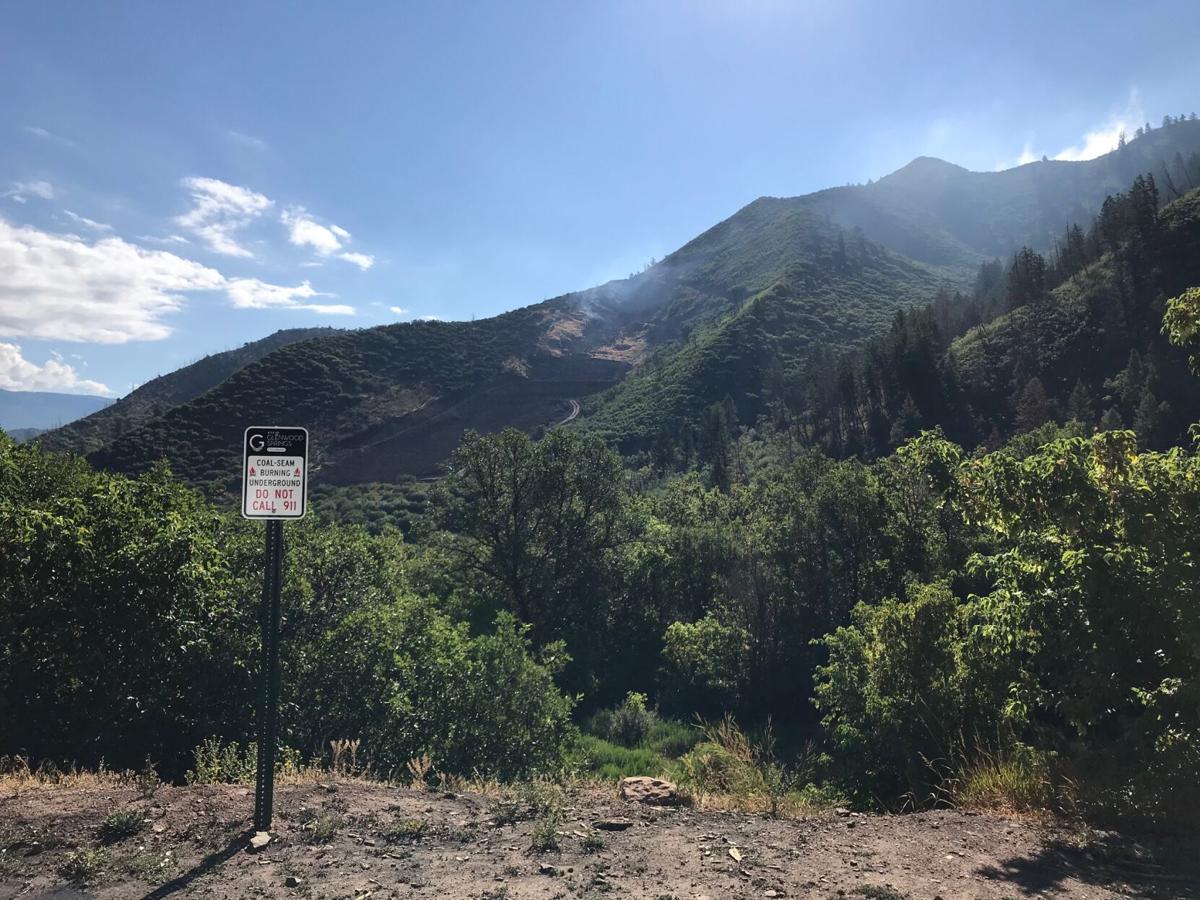 A sign informs onlookers of South Canyon near Glenwood Springs of rising smoke being the result of an underground coal mine fire. Burning miles from town, the site is considered the most threatening of Colorado’s 38 coal mine fires that have been identified. Photo courtesy Tara Tafi, Colorado Division of Reclamation, Mining and Safety 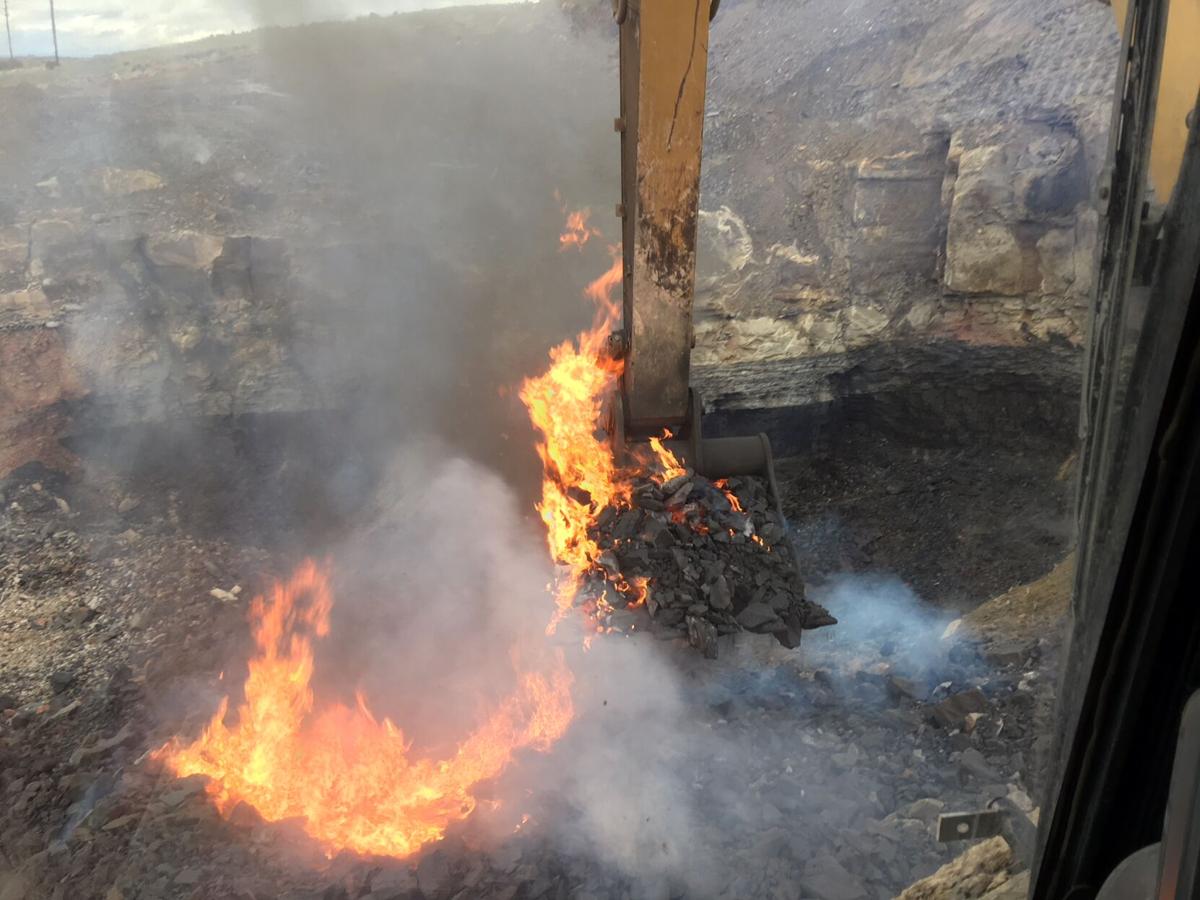 Excavation reveals the coal mine fire burning beneath the surface of Wise Hill near Craig. Officials are hopeful that the $2 million effort of five years was successful. 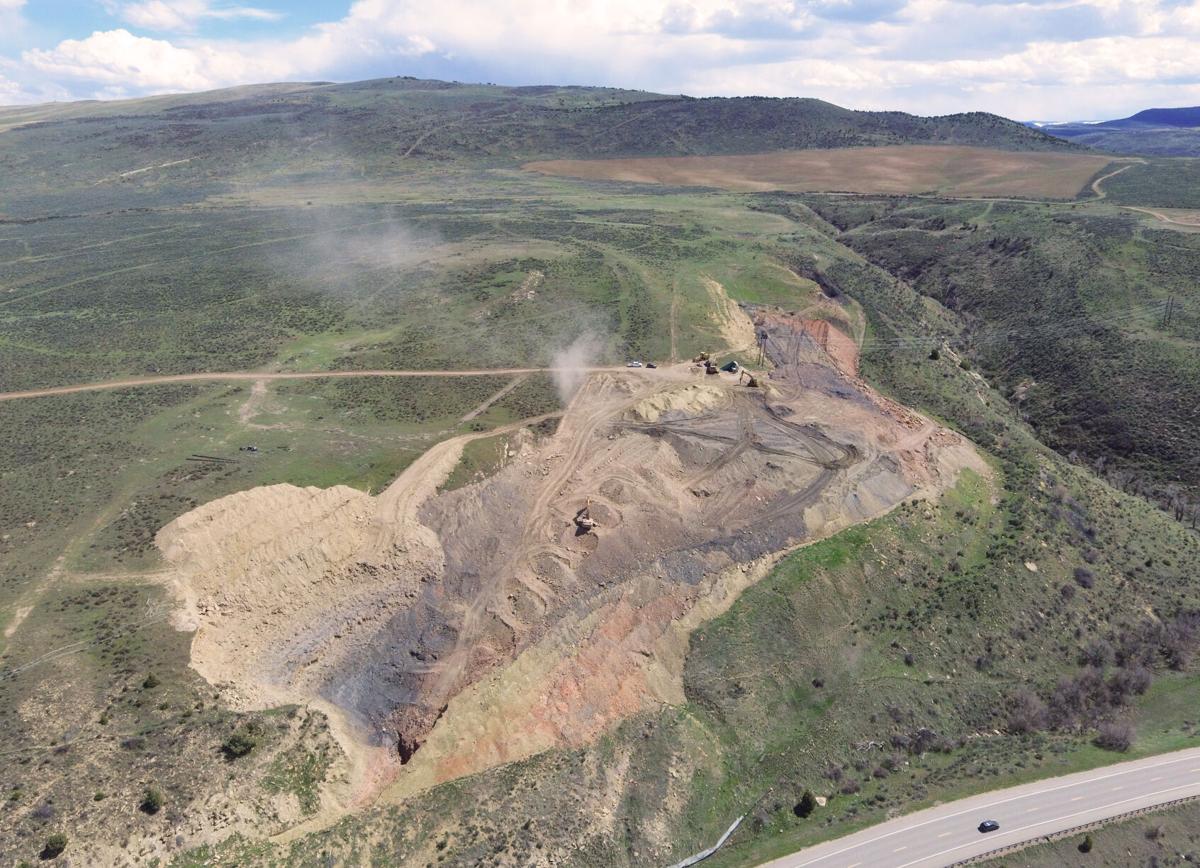 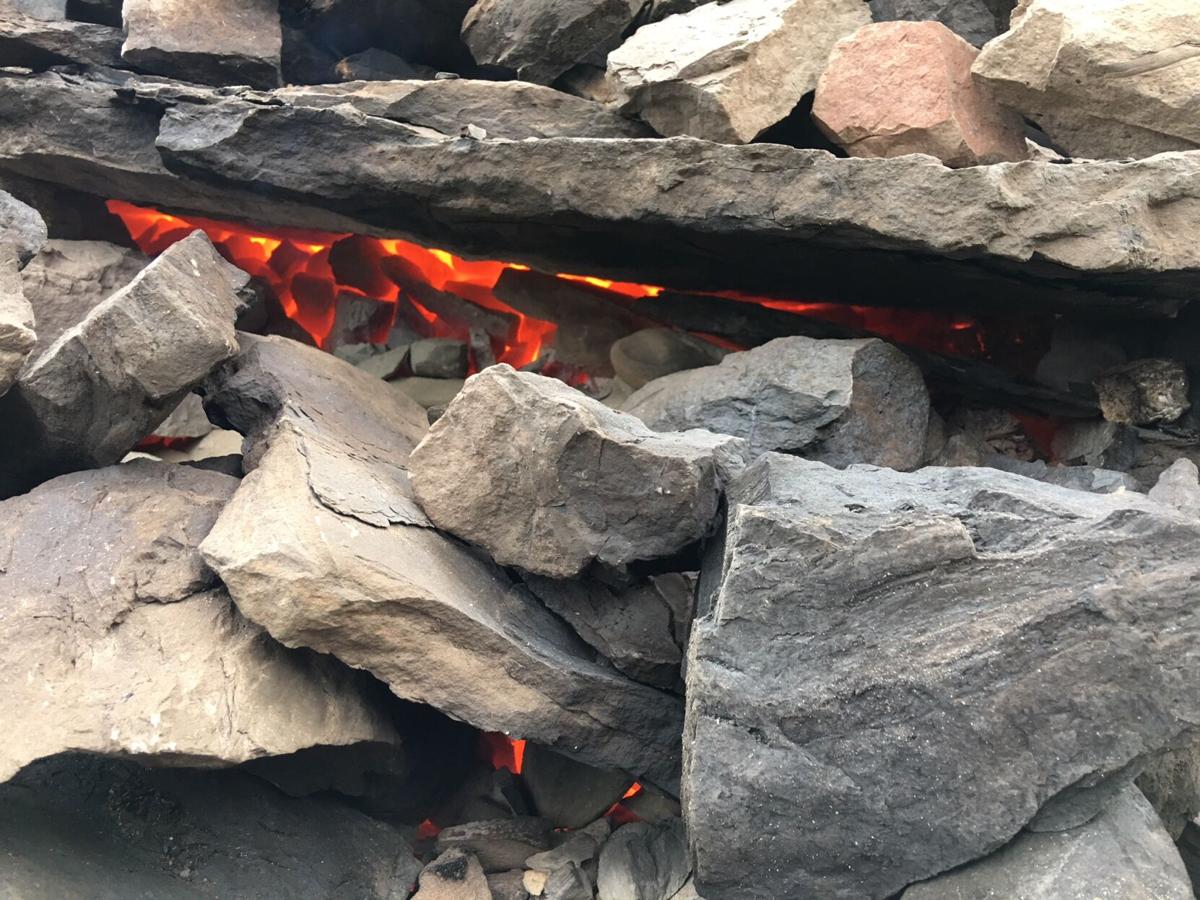 Embers smolder beneath the surface of an underground coal mine fire in Colorado. The state has identified 38 burning unseen.

A sign informs onlookers of South Canyon near Glenwood Springs of rising smoke being the result of an underground coal mine fire. Burning miles from town, the site is considered the most threatening of Colorado’s 38 coal mine fires that have been identified. Photo courtesy Tara Tafi, Colorado Division of Reclamation, Mining and Safety

Excavation reveals the coal mine fire burning beneath the surface of Wise Hill near Craig. Officials are hopeful that the $2 million effort of five years was successful.

Embers smolder beneath the surface of an underground coal mine fire in Colorado. The state has identified 38 burning unseen.

In Craig Amichaux's childhood memories, there's a mystical land not far from his Glenwood Springs home, close but deep in the mountains.

"A beautiful country," he says. "Bears and elk. And the fascination of it is there's thermal hot springs out there, a hippie dip."

Back in the 1980s, a teenage Amichaux would take the backroads to a landfill out there, dropping off junk from the campground his family ran. Sometimes he'd stay awhile, curious about the pillars of smoke rising from the green slopes above, as if from a volcano.

But no. "Underground coal seam vents," Amichaux says. "As a kid, you're like, 'What the hell is going on here?'"

In 2002, by then a man with a young daughter, he learned the consequences all too well.

That hot, windy day is a blur in his mind now: The wall of flames marching to his home and that of his parents; the Jeep and pickup they loaded with campground guests; the fast, hellish drive through the inferno; the relief of making it to Interstate 70, joining the traffic of everyone escaping Glenwood.

In the end, the town was spared by the Coal Seam fire that roared to more than 12,000 acres. But 29 homes were lost, including the Amichauxs'. It was one of the most devastating disasters in the area's history.

The official suspicion: Those vents inhaling oxygen, fueling a decades-old burn raging at unknown depths since coal mining was abandoned. The cracks spewing fumes have since been found to exceed temperatures of 500 degrees. In 2002, the prevailing belief is that the blaze breached the wooded surface. The wind did the rest.

"It took me about three years to get back to life as normal, just from the financial implications and being without a place to stay," Amichaux says. "So yeah, it was a big deal for us. A big deal."

Today, especially in winter when melting snow adds steam, Amichaux looks out to the place that he no longer regards as mystical but instead menacing, a source of anxiety.

"You can still see smoke," he says. "Huffing and puffing every bit as hard as it was."

The Coal Seam fire serves as a cautionary tale. While Coloradans trembled at the sight of record wildfires this summer, more than three dozen fires continued to lurk unseen beneath the state's surface, none of them immediate threats, but some of them monsters nonetheless, waiting, possibly, to wreak havoc above.

A few miles from Glenwood, South Canyon contains the most concerning of Colorado's 38 coal mine fires that have been identified. The two in South Canyon are considered "highly active" in a 2018 report prepared for the state's Department of Natural Resources.

The report by contractor Tetra Tech paints the grim picture of assessing the fires, smoldering under remote, rugged terrain. "In some cases," the report reads, "vents were inaccessible for monitoring because of unsafe ground conditions and toxic atmospheres."

On one occasion, the ground was checked at 900 degrees; sandstone looked as if it was being eaten away. "Orange glowing" was noted at another mountainside. Elsewhere, fractures in the earth were recorded close to 100 feet in diameter. Researchers fled at times, when their monitors alerted them to fatal levels of carbon monoxide and hydrogen sulfide.

While most of the 38 fires were deemed "low" and "very low" risks, 12 with "medium" and "high" levels are listed on the Western Slope, burning within the coal-bearing Grand Hogback. Once granting prosperity to miners, beginning in the late 1800s, the hogback is now a messy, complex hazard left in the hands of state government.

Mitigation can be a "monumental" undertaking, says Tara Tafi, senior program manager with the Division of Reclamation, Mining and Safety. Far from unique to Colorado, some consider these fires a near impossible task.

"They're underground for one thing, so we can't readily see them," says Eric Cavazza, director of the Department of Environmental Protection in Pennsylvania, home to the most cautionary of all mine fire tales. In the 1980s, unable to control the subterranean conflagration opening house-sized sinkholes and sending up poisonous gas, the federal government paid residents to leave Centralia, now a ghost town.

"The best way to extinguish (mine fires) is to do a full excavation, which is extremely expensive," Cavazza adds. "And I'm sure it's a lot more expensive in Colorado, because your topography is much different."

Indeed, the vertical nature of the mines complicates the job, Tafi says. In South Canyon, for example, excavation is all but unimaginable.

"I don't foresee us being able to extinguish that fire short of literally taking the mountain down," she says.

The fire's limits are likely hundreds of feet deep, snaking through the top-to-bottom configuration coal-seekers had in mind. That's how they worked across the Rocky Mountains, rather than horizontally in flatter parts of the country.

"So the rooms are stacked on top of each other instead of next to each other," Tafi says. The result is subsidence — collapsing that causes the ground to sink, and "then allows more air to be inhaled into the fire, and then that drives the fires," she says. "So it's this negative feedback loop."

And so the hope of crews this summer at South Canyon was to suffocate portals. Where it wasn't too hot or too toxic to work, they covered holes with clay and soil amounting to 3 1/2 acres. "Kind of like throwing a blanket over the fire," Tafi says.

And now she'll wait to see if the blanket holds. But it's just one blanket; many more are needed across the landscape, she says. Ideally, she says, funding will allow for a grout curtain, an injected barrier attempting to cut off fuels. But like the blankets, the curtain would be only that: an attempt.

So this summer's mission at South Canyon — requiring $450,000, Tafi says — is followed by the kind of uncertainty that follows most jobs pertaining to mine fires.

"It's possible they burn themselves out," says Travis Parsons, the official assigned to them in West Virginia. "It's also possible they may rear their ugly heads at some point in the future. There's a lot of unknowns in this business."

Parsons is past president of the National Association of Abandoned Mine Land Programs (NAAMLP), the point agency for the 23 states and three Native American tribes receiving federal grants to reclaim lands harmed by past coal mining.

These grants were established by a 1977 law. Annually, each state was to receive a sum based on federal fees collected on every ton of coal mined that year. A formula considering a state's historic production would also factor into the grant amount every year.

This is the money Colorado's Division of Mining, Reclamation and Safety uses solely to monitor and address coal fires, with no other funds allocated.

And as coal production has steadily declined, so has the money. Federal fees collected for the grant program continue to shrink.

The 2020 pot for states and tribes totaled $170 million, less than half the total issued a decade ago.

But the grant program was never destined to win the nation's fight against coal fires. Consider, Parsons says, the estimate in his home West Virginia alone: More than $1 billion needed for the 40 mine fires counted by the state. His NAAMLP database shows 3,774 unabated beasts across the country.

The money is simply not there to put them out, Parsons says.

"When you attack one of these fires, you're giving up many, many resources that can be spread out over many, many communities," he says. "That's not to say we don't do it, but I don't know how responsible it would be to proactively go out and take on reclamation of a bunch of mine fires when there are so many other problems that need to be addressed immediately."

Prioritizing is the strategy in Colorado, Tafi says.

Tetra Tech's 2018 report serves as a checklist, leading her team to claim a recent victory at the former fire called Wise Hill, south of Craig. At least, Tafi hopes it's a former fire; $2 million went into excavating over the past five years, following previous grouting and flooding attempts that failed. Excavation has also showed signs of success at a site north of Rangely, Tafi says.

But coal is highly combustible, a formidable, unpredictable foe indeed. The damage by fortune-seeking miners is done.

Four years after an abatement project finished at a fire near Meeker, it's still considered a moderate threat.

"It's less than a mile from town," Tafi says. "Those are things that are concerning. But, you know, we do the best we can given the resources we have."

This fall, she has her sights on a blaze near Rifle. It "presents a substantial risk of starting a surface fire," Tetra Tech wrote in the 2018 report, ranking it four spots down from the top threat of South Canyon.

Work will continue there, at that unseen burn creeping toward Glenwood.

The reality, Tafi says: "The residual heat in that mountain is going to be there for a long time."

And so from his home, Amichaux will continue to look on and worry. Unlike many, he knows where to look to see those smoke plumes.

"People that come into the area don't even know a thing about it," Amichaux says. "They can come here and spend two weeks, and they might not know about it when they leave."

And sometimes he wishes he could be like them, blissfully unaware.