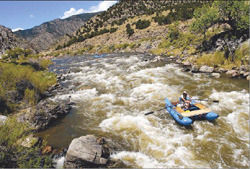 Rafters rode the Arkansas River through Five Points recreation area near Texas Creek between Salida and Canon City in 2007. (CHRISTIAN MURDOCK, THE GAZETTE)

The Arkansas River near Texas Creek between Salida and Canon City. (The Gazette file)

Rafters rode the Arkansas River through Five Points recreation area near Texas Creek between Salida and Canon City in 2007. (CHRISTIAN MURDOCK, THE GAZETTE)

The Arkansas River near Texas Creek between Salida and Canon City. (The Gazette file)

A Texas man was killed while rafting the Arkansas River’s whitewater Monday, just days after state officials issued high-water warnings across the state.

Although he wore a life jacket and helmet, officials suspect he drowned. No one else on his raft was injured.

The Arkansas was rushing at about 4,200 cubic feet per second — nearly double the average June flow of 2,200 cfs.

The river below the Pueblo Dam was closed Tuesday to inner-tubes and nonwhitewater boats, but the upper Arkansas through its 152-mile Headwaters Recreation Area remains open, state Parks and Wildlife announced Tuesday.

The river also was closed east of Pueblo Boulevard by Pueblo police and the Pueblo County Sheriff’s Office.

The National Weather Service issued a “severe alert” for Cañon City, where the river is expected to rise early Friday, producing minor flooding through Sunday.

Advisories were in place, too, for two river stretches between Granite and Buena Vista and for the segment through the Royal Gorge west of Cañon City, the Pueblo Chieftain reported.

The bulging Arkansas also led to cancellations of some events at the FIBArk this Thursday through Sunday.

Still, organizers said, the high, rushing water should make for good entertainment for the thousands of spectators expected.

Outfitters had been expecting the abundant snowmelt to provide their best and longest season in decades.

“Yes, we have a way above average snowpack, but it’s not setting a record for the highest peak. It’s high water, which we have experienced before,” said Bob Hamel, executive director of the Arkansas River Outfitters Association.

But as the snow melts, “it’s going to come fast and furious,” said Hamel. So the Outfitters Association has worked closely with Parks and Wildlife to recommend closures at certain Class 4 and 5 sections.

Nonetheless, there always are safe spots to raft, he said, and guides get training every day.

“It’s part of what we do and accept in the inherent risk of adventure sports. But we stack the deck in our favor,” Hamel said.

But in adventure sports such as rafting, people need to know their limitations. Even strong, healthy individuals can get swept away fast with water levels this high, he said.

“It can get disorienting fast.”

Rivers are raging at or near flood levels across Colorado, and that’s with plenty of snow still yet to melt on many mountains. With more runoff on the way and the rain season approaching, communities are bracing for impact.