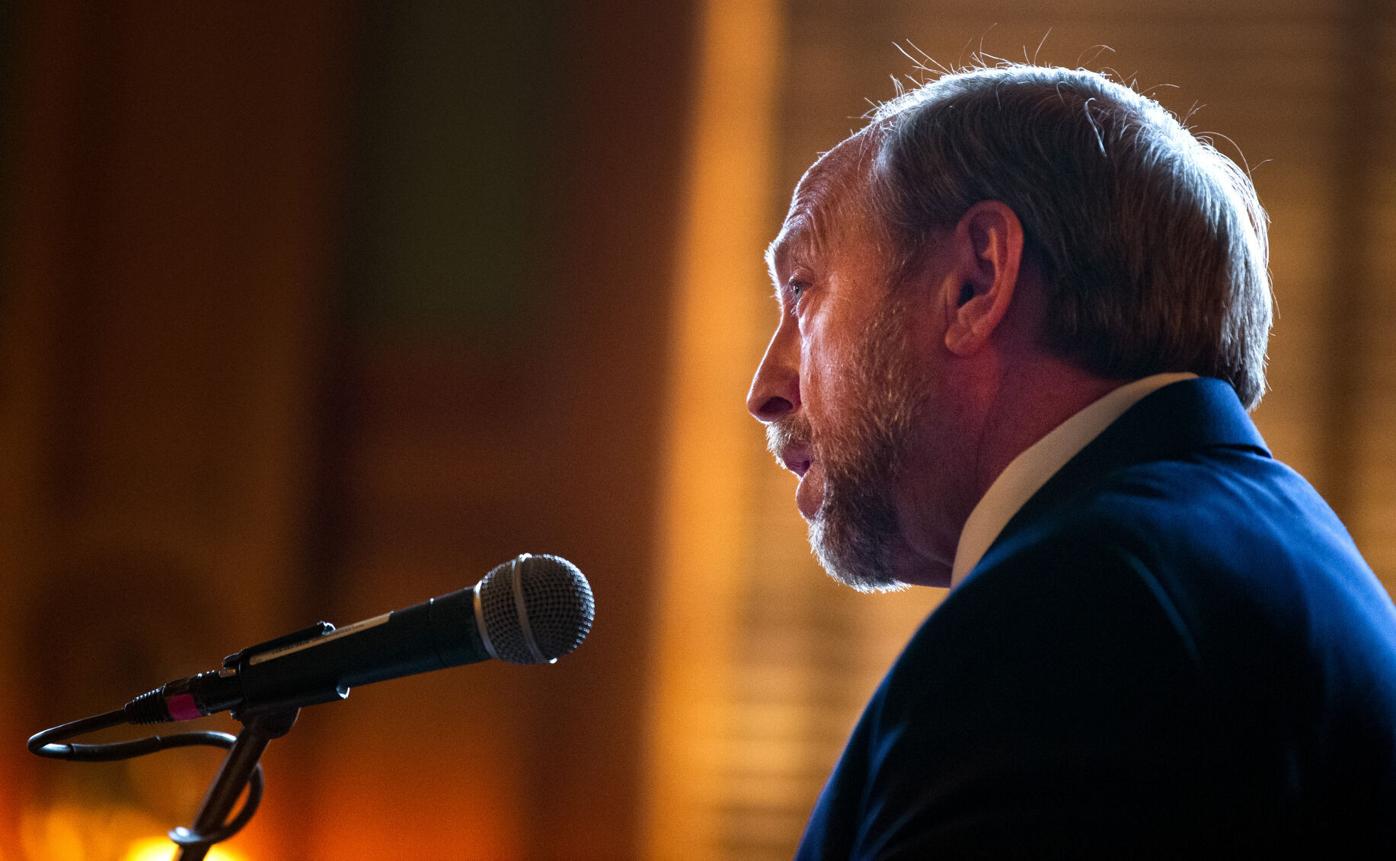 Mayor John Suthers, seen in this file photo, celebrated the city’s accomplishments at the 2021 State of the City address Friday at The Broadmoor. 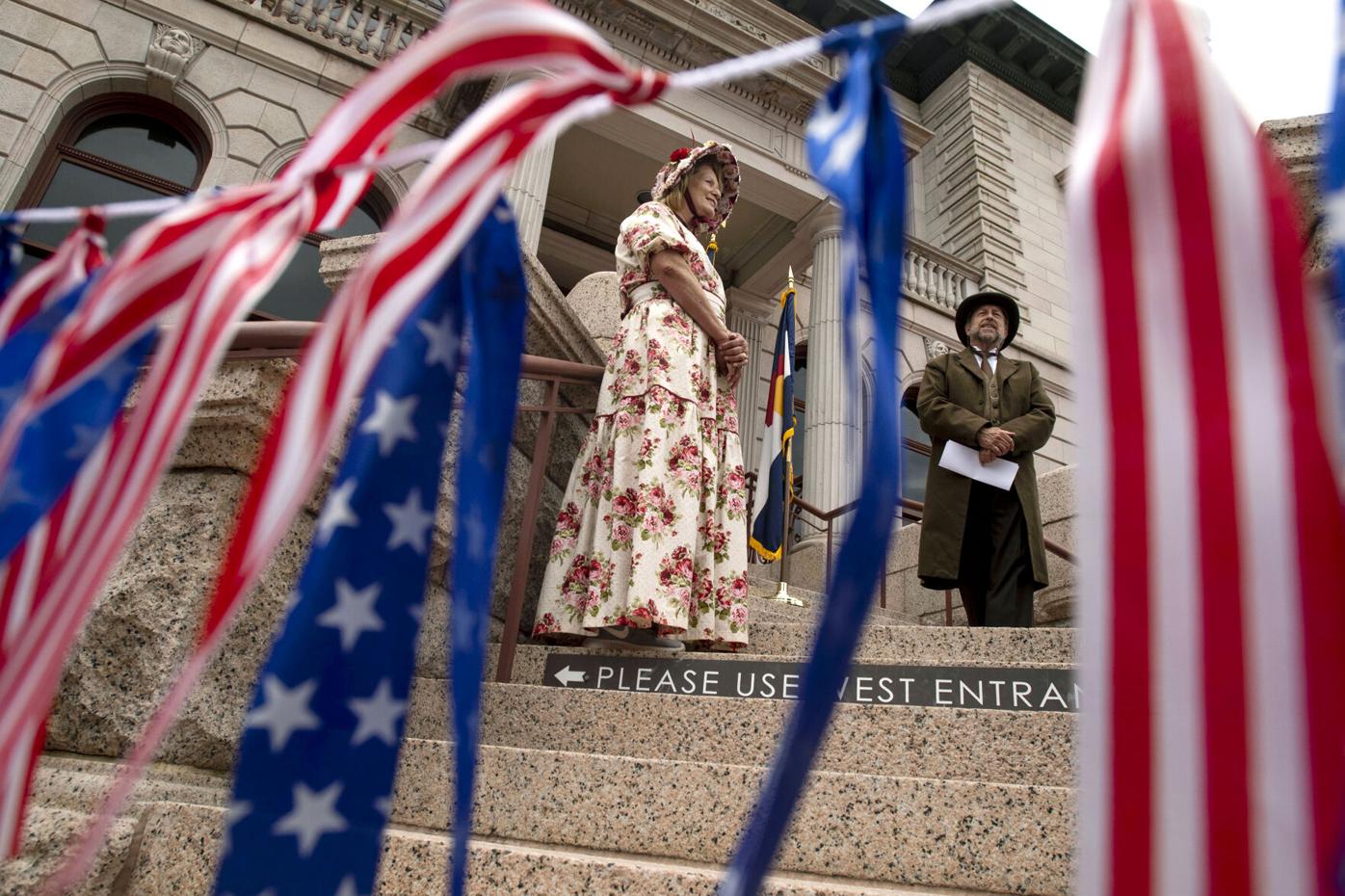 Colorado Springs Mayor John Suthers and his wife Janet Suthers listen to the crowd sing Happy Birthday during the opening ceremony at the Pioneers Museum in downtown Colorado Springs, in celebration of Colorado Springs 150th year, on Saturday, July 31, 2021. (Chancey Bush/ The Gazette)

Mayor John Suthers, seen in this file photo, celebrated the city’s accomplishments at the 2021 State of the City address Friday at The Broadmoor.

Colorado Springs Mayor John Suthers and his wife Janet Suthers listen to the crowd sing Happy Birthday during the opening ceremony at the Pioneers Museum in downtown Colorado Springs, in celebration of Colorado Springs 150th year, on Saturday, July 31, 2021. (Chancey Bush/ The Gazette)

Suthers extolled the city's achievements during his annual State of the City address at The Broadmoor. He also outlined challenges the community will need to tackle together, such as funding for parks, wildfire mitigation and increased demands for police and fire protection.

"It is up to us to be the good ancestors that future generations of Colorado Springs residents need us to be," he said.

Suthers noted that in recent years the city has laid a strong foundation, growing from $31 billion in gross domestic product to $40 billion, thanks in part to growth in the aerospace, medical technology, software engineering and cybersecurity sectors. The strong economy has also restored 100% of the jobs lost during the pandemic, he said.

"Even a worldwide pandemic could not halt this city’s historic momentum and ascendance as a great American city," Suthers said.

One of the newest and fastest growing sectors is sports, which has grown to half a billion dollars industry in town annually, in part because it is home to the U.S. Olympic and Paralympic committees and numerous other sports organizations. Suthers also pointed to the community's culture of athletic excellence.

"If people who live and train in Colorado Springs were their own country, we would have finished fifth in the medal count in the Olympics and 11th in the Paralympics," he said.

PERSPECTIVE: The city needs money for wildfire protection and parks

Tourism, hurt most by the pandemic, has also come roaring back, Suthers said, with the community leading the state for hotel and motel occupancy and most of the City for Champions projects, including the $52 million Robson Arena at Colorado College and the $45 million Weidner Field, coming to completion. The last of the state-sales tax funded projects, the Air Force Academy Visitors Center, was set to have its bonds go up for sale this week, Comprehensive Planning Manager Carl Schueler told the Colorado Springs City Council.

"It appears the dream of the City for Champions effort begun in 2013 will be fully achieved," Suthers said.

The construction industry also set records in 2021 and Suthers predicted that transformation would continue, particularly downtown, where several hotel and apartment projects are in various stages of development.

The public sector has also made great gains in recent years. Suthers said when he took office in 2015, the city's roads were terrible; since then, he said, 1,300 miles of roadway have been improved. Voters furthered road maintenance by passing a dedicated sales tax to fund it.

"While they still need work, our progress is undeniable," he said.

Stormwater infrastructure, also long neglected, is well on its way to improvement with help from a dedicated stormwater fee, he said.

Before he leaves office in April 2023, Suthers would like to see new revenue approved for another major need in the city — parks. The department is facing an almost $270 million backlog in needs and development projects after the department faced severe cuts during the Great Recession, an independent study showed.

"We have not been able to maintain general fund revenues sufficient to develop new parkland and adequately maintain the parks trails and open space we have," Suthers said.

Funding for parks has lagged because it competes with other priorities, such as police and fire protection, that also need more investment.

Voters will decide in November whether to double the dedicated tails, open space and parks tax from 0.1% to 0.2%, or from about one cent to two cents on a $10 purchase. If passed, the dedicated tax would stay in place through 2041. An increase in the sales tax could bring in $12 million more for a total of $22 million of dedicated parks funding in 2022, a projection that keeps rising as city revenues have been buoyed by strong spending and tourism revenues.

Suthers also touted his plan to fund wildfire mitigation, which requires voter approval as well. Under the plan, the city would retain $20 million in "excess" tax revenues beyond the Taxpayer's Bill of Rights cap and create a fund that could provide several hundred thousand dollars a year for the Colorado Springs Fire Department to reduce fire risk in and around town. He called it an innovative solution that does not require a new tax.

"When it comes to wildland fires, it’s not a question if there will be another fire," he said. "It’s a question of when and where."

After reflecting on the city's accomplishments, Suthers also took time to honor one of the community's past mayors and the only female mayor in its history, Mary Lou Makepeace, with the Spirit of the Springs Award, honoring her lifetime of contributions to the community.

Makepeace was first appointed to the council in 1985 and then elected as mayor in 1997. She is a proponent of rights for the lesbian, gay, bisexual, transgender and queer people and worked on priorities such as saving City Hall from demolition and creating America the Beautiful Park, according to a filmed presentation on her life.

She said while society has come a long way in terms of women being involved, we have a long way to go, noting she would like to see more women on city council. The council of nine has two female members.

Makepeace also called on residents to participate in the upcoming election and public life.

"You can’t be great, if you don’t have a participating citizenry," she said.

A Colorado Springs coffee shop was among stops by Gov. Jared Polis on Friday during a tour highlighting the state's economic relief efforts th…

The American Dream is a Reality at Cordera

The American Dream is a Reality at Cordera
sponsored